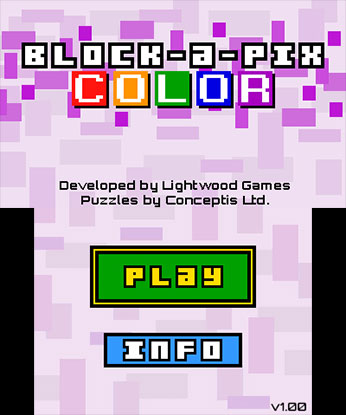 Block-a-Pix Color is a puzzle-strategy game from publisher and developer Lightwood games. Each puzzle is filled with a grid, within which lies a hidden puzzle. So, how does this game stack up against a large library of 3DS puzzle titles?

A game with no plot or protagonist, instead there’s a large grid of numbers with hidden pictures inside. To reveal the picture players use the ‘clue number’ box to drag the color. The clue number tells the number of grid squares that it can fill. If the clue number is one then it can’t cover any further. Starting with the smaller numbers is always a good way to start a puzzle. For example, a clue number of two will cover the starting box and one other grid square. Larger numbers are harder to solve. For example, a six can fill either six squares in a row or a 2×3 rectangle. Block-a-Pix Color contains 120 exclusive puzzles, that range from a small beginning size of 10×15 grids to larger 100×65 ones. As the puzzle sizes get larger so does the amount of detail. 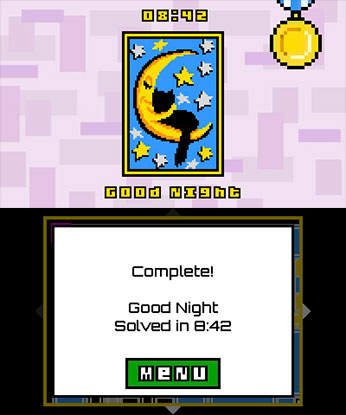 Puzzles can be solved using basic math and deduction. As pictures start to take form, you begin to see which way each clue number is headed. If players get stumped they can always press the X button, which tells you the number of errors on the screen. Players can either decide to have the errors reset or go back to the puzzle and try to determine where the errors are themselves. 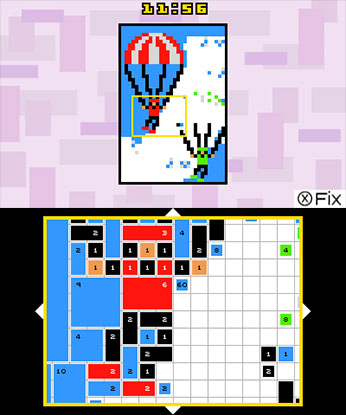 I must admit that having never played anything from Lightwood Games, I wasn’t sure what to expect. A title like this is something that probably would not have shown up on my radar before. After playing it I am glad I did. There isn’t anything about this game that I would say is an amazing must-have title. On the flip side, there’s nothing terrible about it either. The only real gripe I have with it is the cost of $7.99, which seemed a bit too high. If you’re looking to take a break from story-based, action-packed games, or just want to challenge your brain in a fun way, then Block-a-Pix Color could be just what you’re looking for.

If you’re looking to take a break from story-based, action-packed games, or just want to challenge your brain in a fun way, then Block-a-Pix Color could be just what you’re looking for.