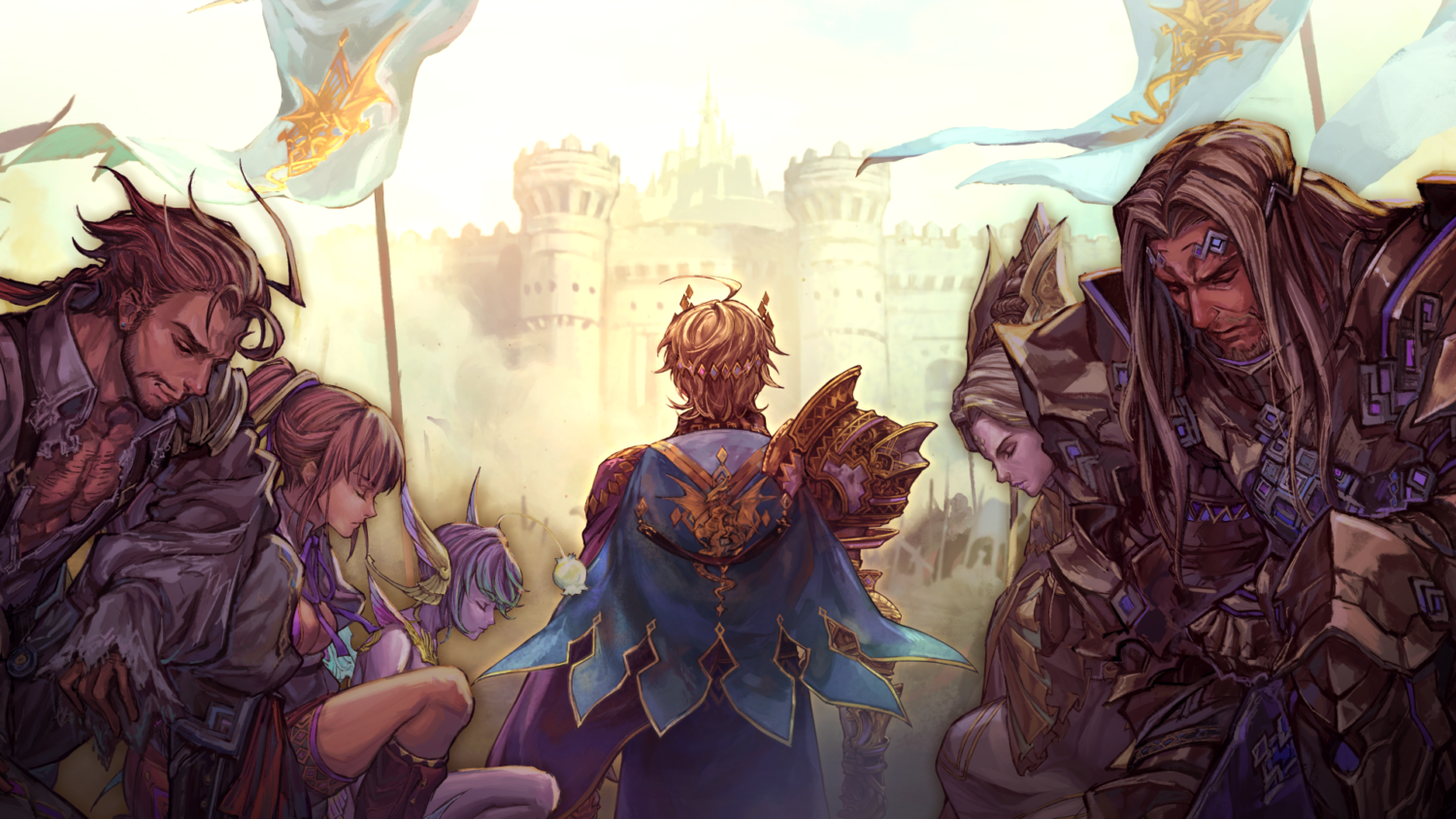 Brigandine: The Legend of Runersia is a tactical RPG for fans of tactical RPGs. What I mean here is that it’s not going to bother you with gimmicks to cross genres. It doesn’t simplify itself to appeal to casual gamers. It’s made for people who enjoy a turn-based, strategic challenge, and then it challenges them. 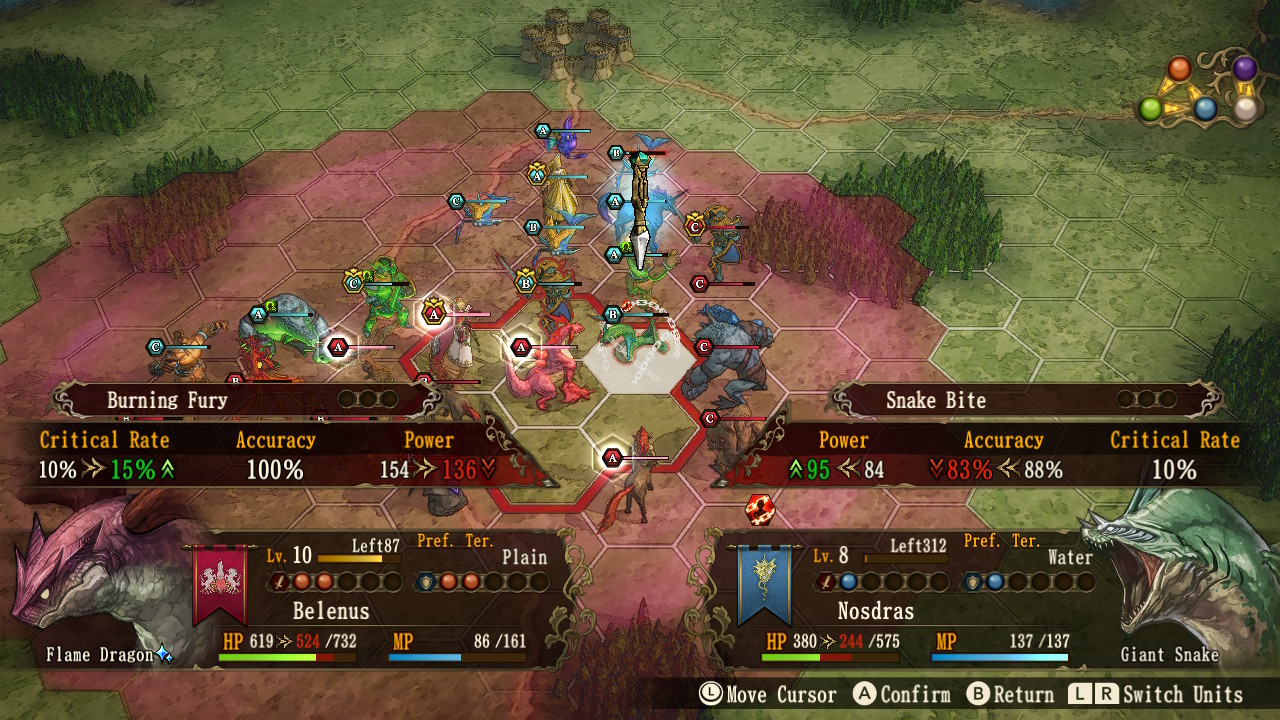 That said, Happinet Corporation wants you to play it. Challenging as it may be, Brigandine: The Legend of Runersia comes packed with gorgeous artwork, a compelling story, tons of replayability, and—perhaps most importantly—an extensive tutorial.

I’ll go ahead and start with that, because that’s where I started. You can dive right into the game, but a separate multi-step tutorial is available to lead you through the game’s basics and strategies. It’s a bit over-educational at times (I can’t imagine anyone needs to be told how to make a menu selection); it feels like you’re setting up a table-top game, and the guy who brought it over is explaining the rules while you’re preparing the snacks.

And there’s plenty to learn. Brigandine: The Legend of Runersia is kind of a cross between Risk and turn-based RPGs such as Langrisser and the pre-3DS Fire Emblem games. Before we get to that, however, let’s look at Runersia itself.

As you’d expect from a game like this, the continent of Runersia is broken upon to multiple nations. And as you’d expect from a continent of multiple nations, they’re on the brink of war. Each carries a mana stone embedded in special armor called Brigandine, but this does little to unit them. Each country—believing it to the best option for uniting Runersia—seeks to conquer the others much like in Sengoku period Japan (or my western understanding of it, anyway). 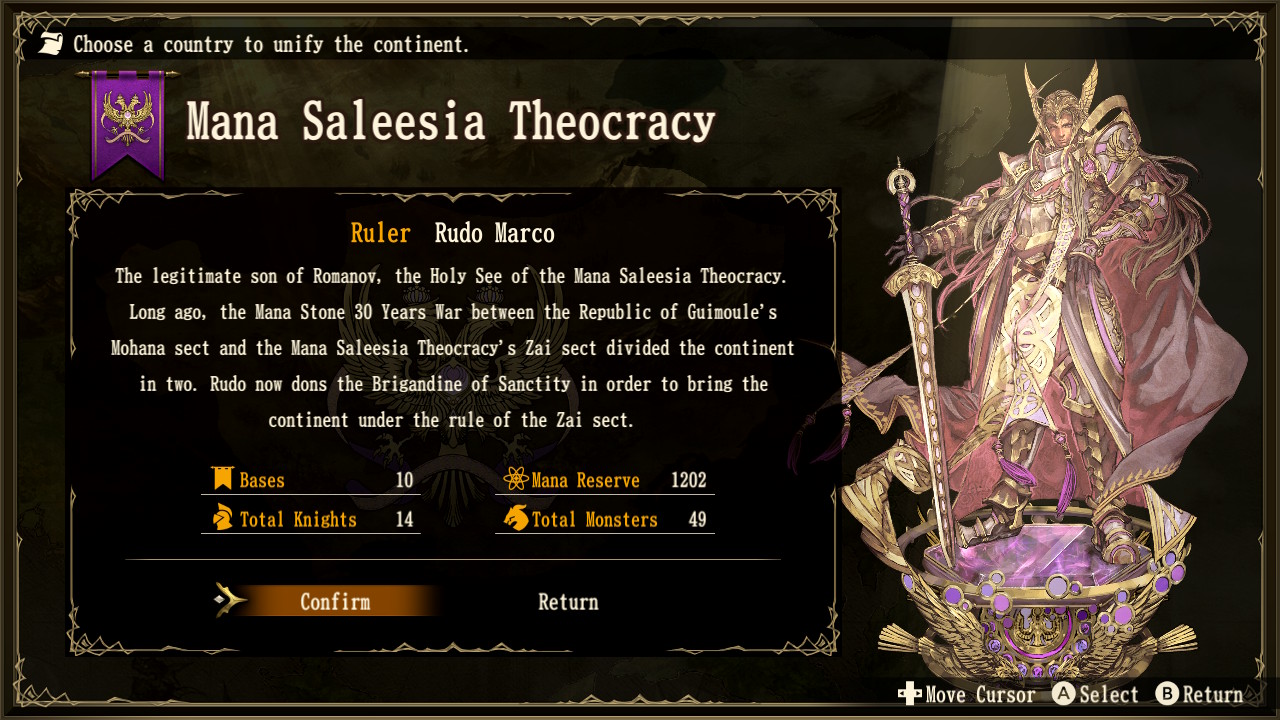 You can play as any of these nations (or as a sixth, separate tribe), getting their perspective when you do. And through the fantastic storytelling and intelligent handling of the game’s politics, you’ll agree with all of them.

So, the goal is to bring peace to Runersia by conquering it. Not the best means to an end, but it’s pretty much all we know, right? And the further you get, the more you’ll learn about this land and its history.

The gameplay is broken up into two distinct phases: organization and attack. Your placement on the “board” and “pieces” you start with are based on which nation you select. Each comes with a predefined number of starting bases, knights, and monsters of various power, as well as mana for setting up your armies. The organizational phase tasks you with planning your attacks and defenses while preparing up your army. You can move knights and monsters to a specific base to launch an attack, but if your other bases become vulnerable if you leave them undefended. In other words, you can’t stack all your knights in one spot. 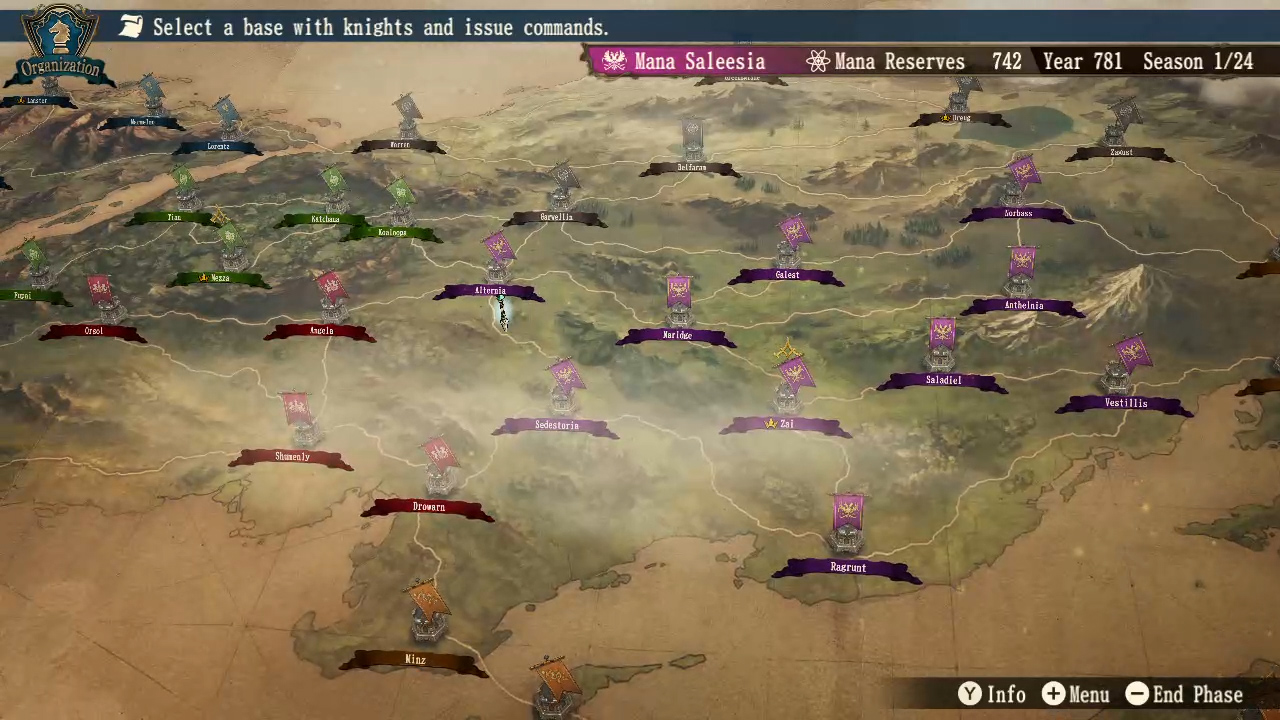 In fact, you won’t want to just split them between offense and defense. You also have the option to send your knights on quests or training missions to help them level up and acquire armor, weapons, and other useful items.

It’s a lot to consider, especially if you’re used to turn-based strategy games that push you straight into linear battles without any thought for defense. How you choose to conquer Runersia—which army you attack and which bases to defend—is entirely your call. It will overwhelm some players, but thankfully there’s an easy mode that lightens the difficulty for your first couple of playthroughs and doesn’t give you a set amount of time to achieve your goal.

Once your army is all set up, the game enters the attack phase. This is where the battles play out based on your setup from the organization phase. Combat takes place on a hexagonal grid, allowing attacks from six sides. The knights and monsters are able to move and execute a physical attack, as well as attack/protect/heal with magic. 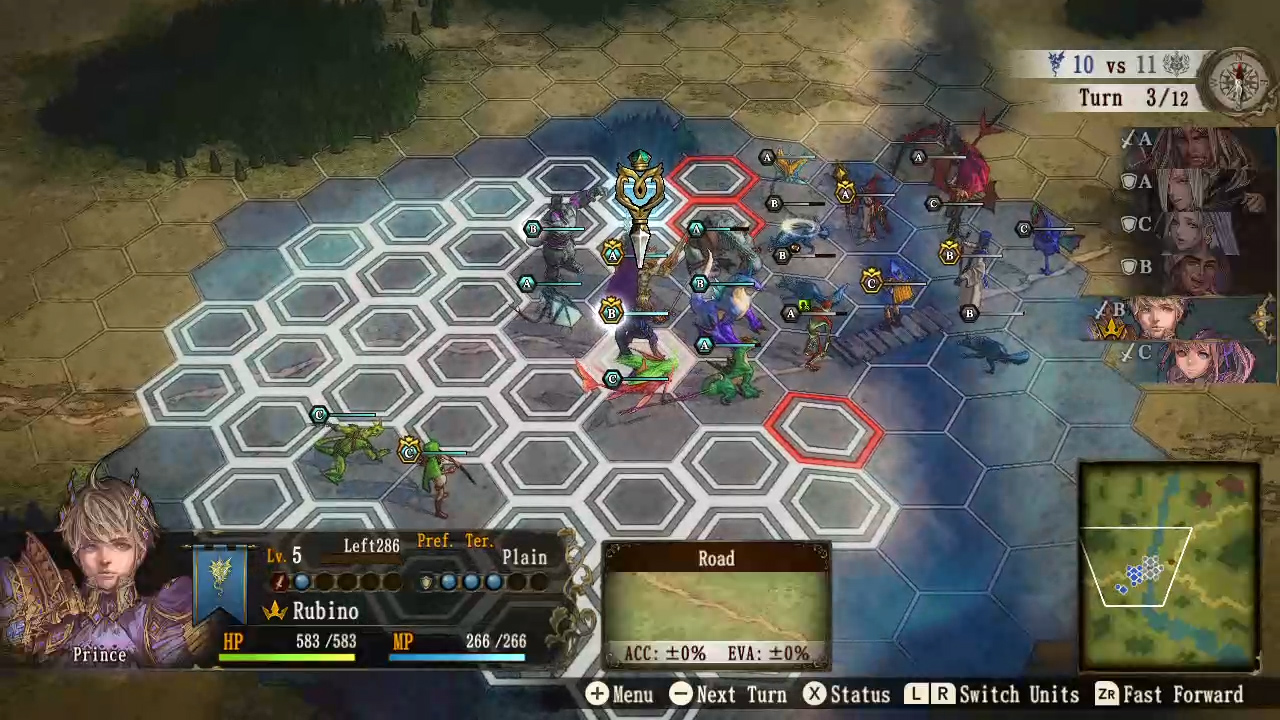 Of course, there are many caveats. Magic attacks/buffs are very powerful and accurate, but you’ll mostly be able to use them only a couple times per battle. Plus, most magic cannot be used after moving, and you cannot move after using it, so you’ll need to plan ahead to keep your magic specialists both in range of and protected from the enemy.

Familiar items such as terrain can affect your abilities, but Brigandine takes this even further with elements such as soldier location. Surrounding an enemy, for example, locks it down and reduces its abilities. Your soldiers also do not need to be next to each other to prevent an enemy from passing through; they just need to be close.

If you win a battle by taking out the commander, you have the ability to recruit remaining monsters from his/her squad. This is a good way to build up your army, but you can also lose your monsters should you be forced to retreat. The monsters are especially important, as they bring an incredible array of capabilities into the fray. Forget about Fire Emblem’s weapon triangle with some sprinkled in magic. The number of available attacks, buffs, and spells available through the monster system is absolutely crazy, and figuring out how to take advantage of them all is a good deal of the fun. 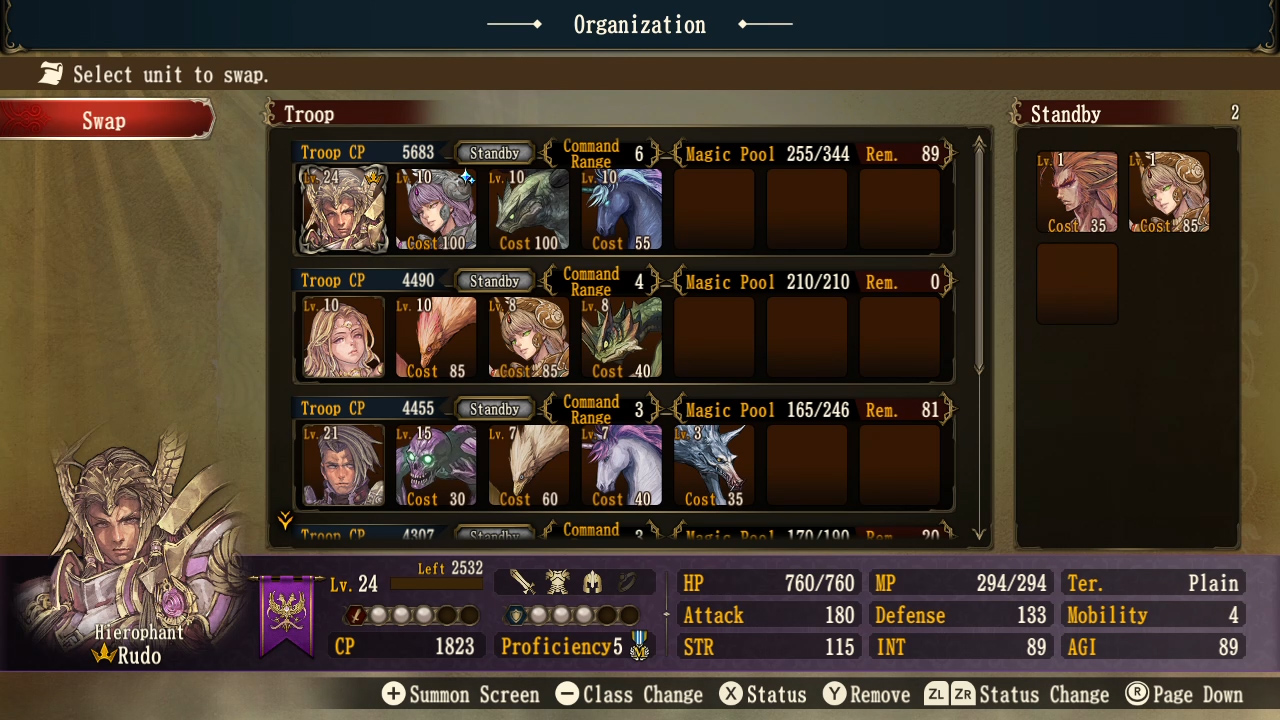 Brigandine has a good number of unique features such as this, all of which help to make the game feel quite refreshing.

Of course, there are plenty of familiar gameplay components as well. You’ll level up both your knights and your monsters, your knights can receive class changes, you’ll get access to better weapons, etc. And although you may choose to focus on just a few of your nation’s main characters, you have no choice to keep all of them ready as you spread out your attacks and fortify your bases. 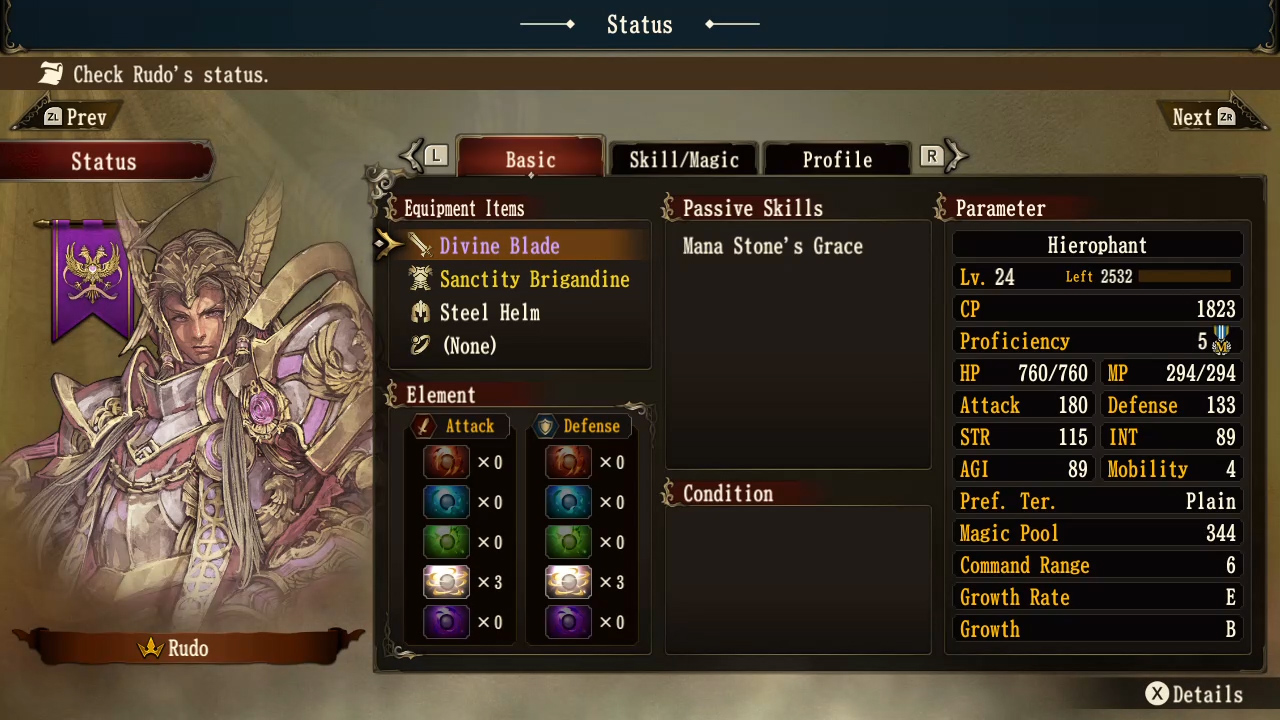 Brigandine takes a unique approach to its visuals, too. There are no movies to push the narrative, just subtly animated illustrations. This artwork is as unique as the gameplay, and perhaps underused. The illustrative graphics during the action phase are colorful and full of texture, but rough edges show as you zoom in. 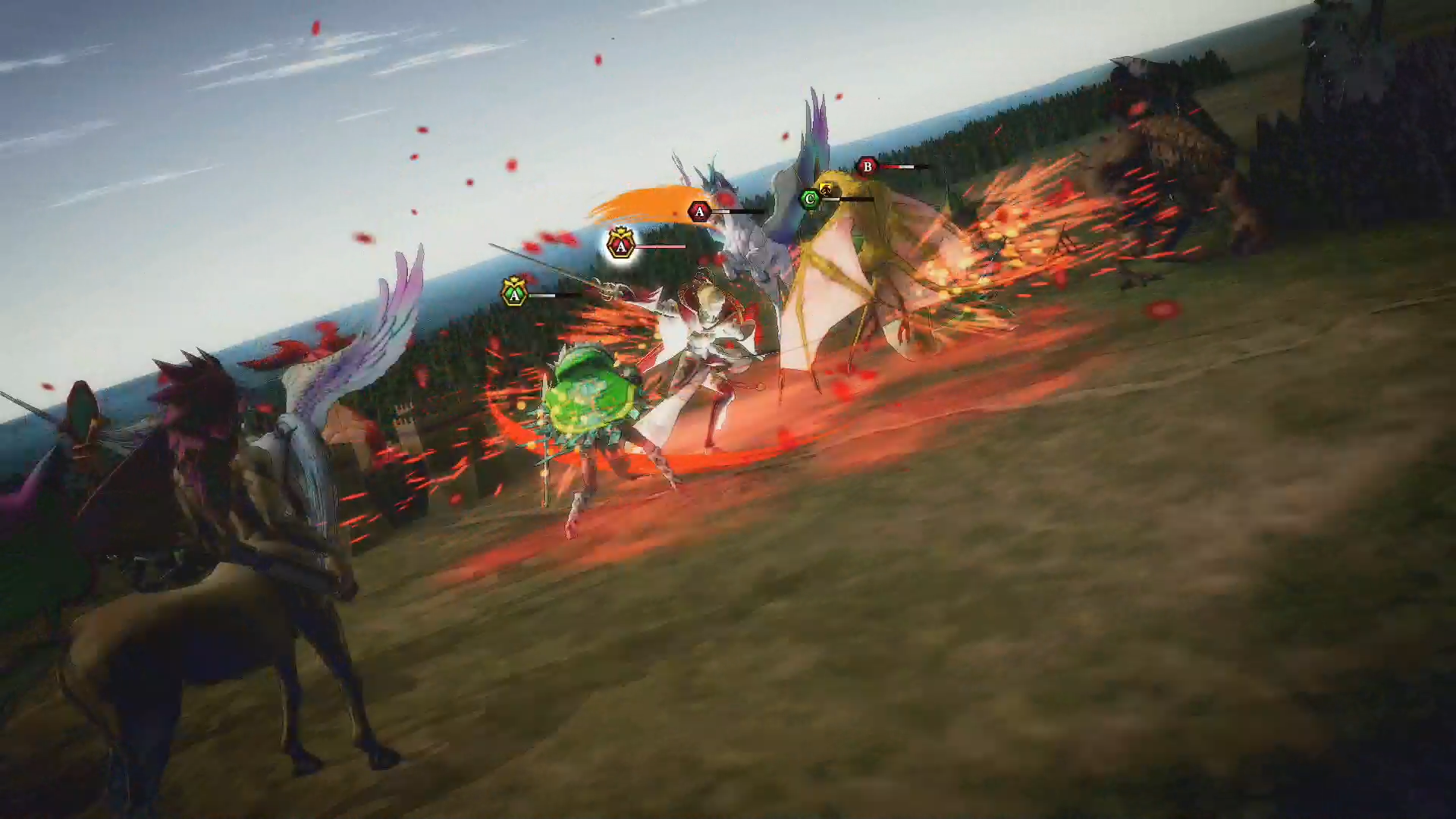 The battles themselves are only basically animated, but the spells are kind of cool, and the monsters are colorful enough to help them easily stand out in handheld mode. The UI is also surprisingly clean and easy to navigate.

With multiple ways to play through Brigandine, you’re looking at hundreds of hours of gameplay. However, the experience doesn’t change a whole lot when starting as a different nation, so the only incentive to do so is to just keep the experience going. Although it’s cool to get a different take on the game’s story, it’s not such a stunning tale that you’ll feel the need to do so right away, especially considering the slow pace of both the narrative and the gameplay.

Because of its dedicated focus on strategy, Brigandine: The Legend of Runersia is a refreshing change to today’s gimmicky turn-based JRPGs. Its serious story, unique gameplay elements, and challenging scenarios will appeal to those who recall a time when tactical games were more about strategy and less about selecting their waifu.