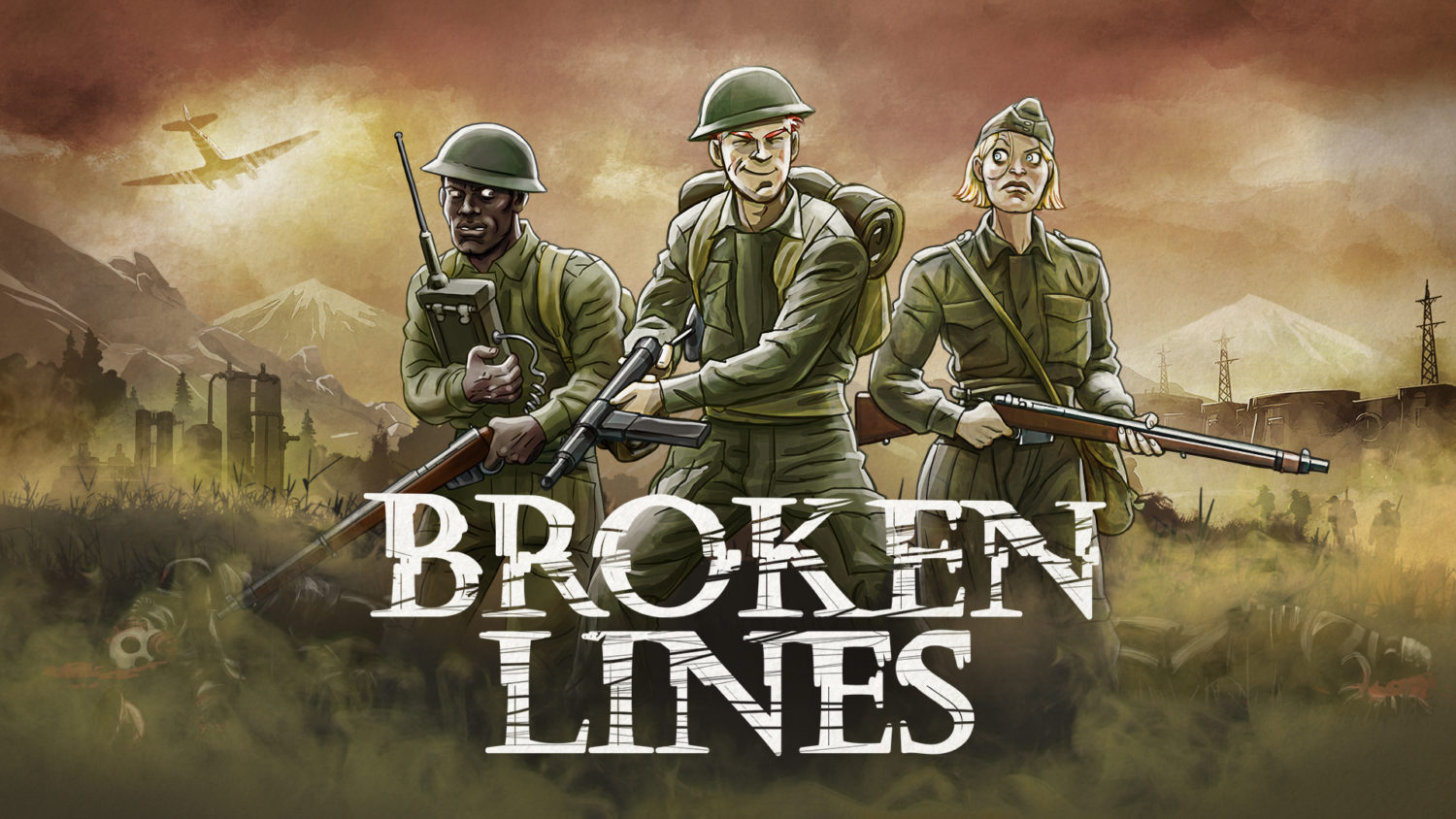 When the night falls down around you, and your airplane falls down with it, you know you’re in deep. In Broken Lines, you start at “deep.” So, now that we’re on the ground again, let’s get going—and we’ll talk through some things along the way. 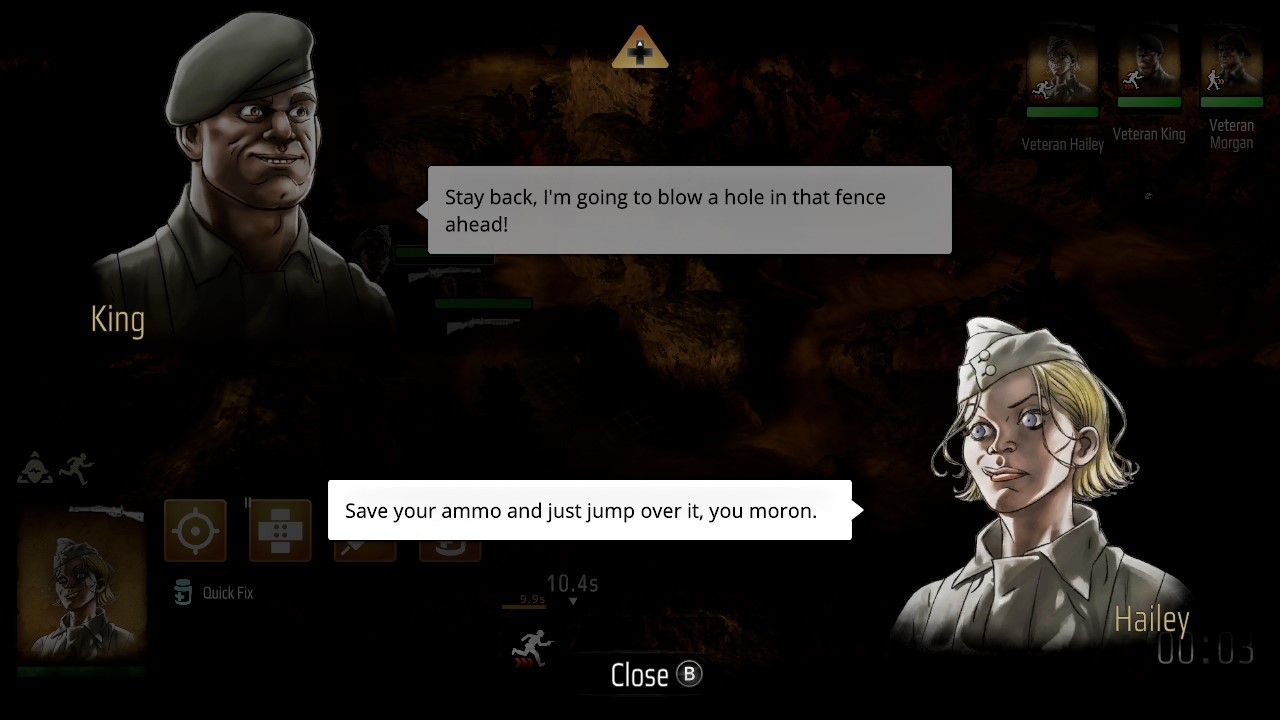 I actually had to start Broken Lines twice, as the original release contained an issue that broke gameplay. On the up-side, the developers recognized the problem, pulled the game, and fixed it.  Kudos to the rapid response team on this one. Now, let’s get started, shall we…

Broken Lines is a turn-based tactical RPG set during an alternate World War II. One interesting feature of gameplay is how events are decided and play out. At the start of a turn, you select a soldier and set waypoints. When you have assigned all the waypoints and actions for your troop, press and hold the ZR button to put things in motion. The characters will act out your instructions in eight second increments. This may seem arbitrary, but it does give the player time to observe everything going on.  Don’t worry about walking past an enemy soldier and ignoring him only to take a shot in the back in this game. If you encounter an enemy, your soldier will open fire. In fact, enemy contact will suspend your set of instructions and let you take new actions until the skirmish is done. 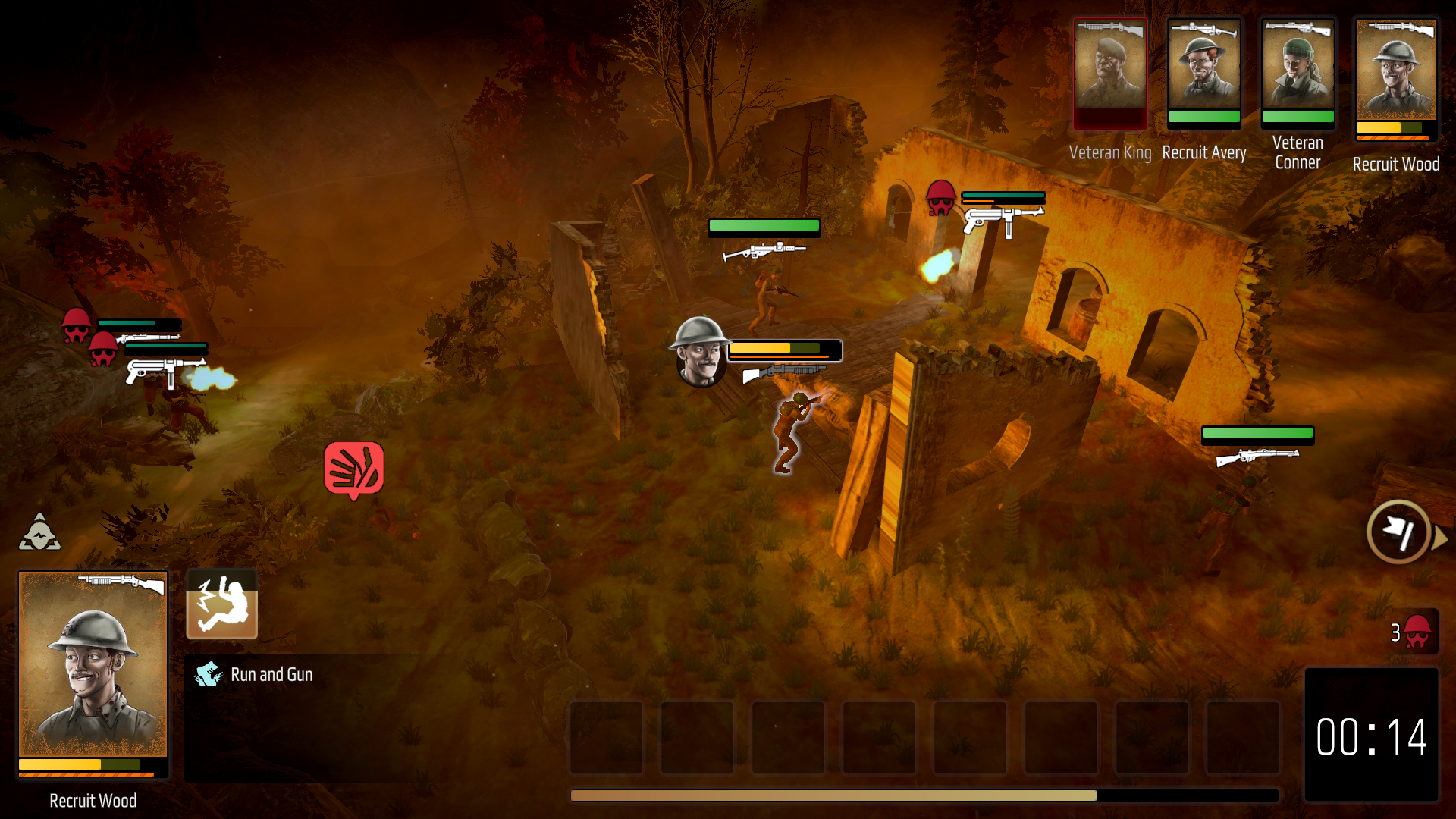 The strategy elements of the game include factors such as what weapon to use, how to flank the enemy, how to lay down suppressing fire, how to take cover, and so on. There are all sorts of details to manage, so it is mildly engaging in that aspect. 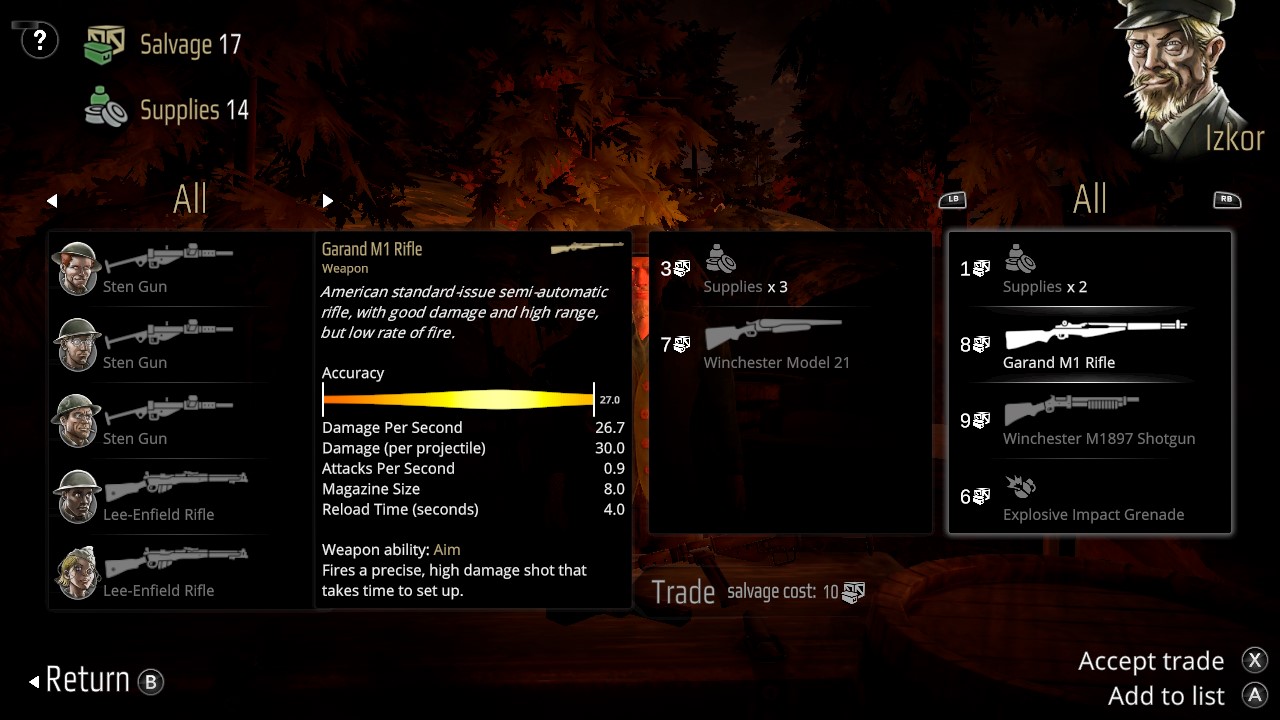 Being a combat game, you will, of course, have to watch your troops’ health meters. You will also have to watch their stress meters. Yes, stress is a significant factor in this game. If your soldiers get too stressed, they can act erratically, fail to obey your orders, and become generally ineffective. The stress factor is a double edged sword; what works against your troops also works against enemy troops. If you use the suppressing fire and flanking maneuvers well, you can induce enough stress in the enemy that they start acting goofy.

All this sounds well and good, and it would be good if the game didn’t have a list of faults which are equally impressive. The tutorial doesn’t do the greatest job explaining how to use all the command and control functions. Selecting things on the screen is a bit touchy, and while you can see details better on a TV versus in handheld mode, it doesn’t keep the selection reticle from being jumpy under the JoyCon. The tutorial does include elements such as how to move, how to flank, how to shoot, etc.  Getting through them helps a little, but the developers could’ve done a better job of stepping you through actual control button use. 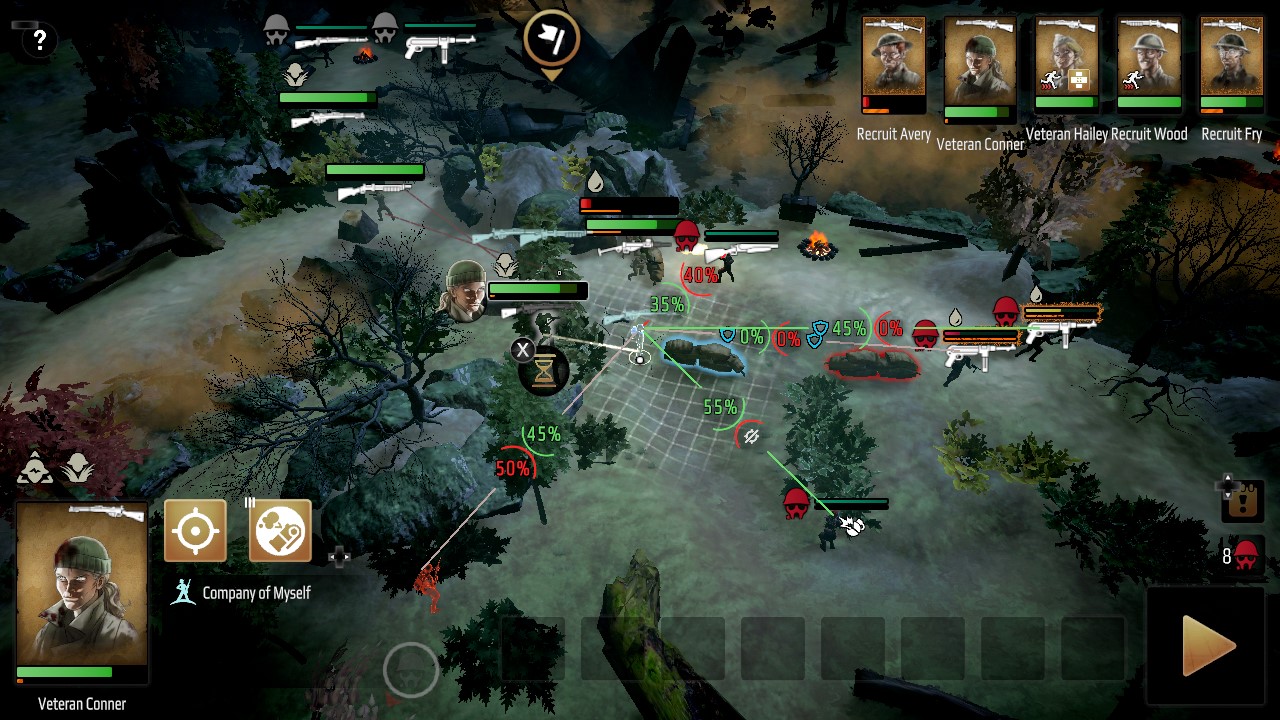 Once you are done with the boot camp style tutorials (complete with a drill sergeant with speed bumps for veins in his head), you can start the actual story, which begins with your troop in an airplane. Engine trouble surfaces, and you crash in what is supposed to be neutral territory. However, you encounter strange soldiers in gas masks speaking an unrecognized language. Also, they’re shooting at you. Now you are on the run, short of supplies, and you have no real mission. On the other hand, you do get to grapple with moral choices like having to decide if you ambush civilians and rob them for supplies. Your decisions have some weight on how the game plays out, and there’s certainly more than one path you can take. Unfortunately, the plot is not well developed and not really engaging. It’s hard to get invested in the story in this one because it is a bit thin. Also, the characters are a bit generic and don’t really help to pull you into the game.

On top of this, the game has a lot of night time play which keeps the graphics a bit indistinct and squint-inducing. The turn based thing is OK, but having to set all the actions of each soldier individually gets wearisome. It would be very helpful to advance the game if the player could select multiple / all of the troops and give them an objective or target. 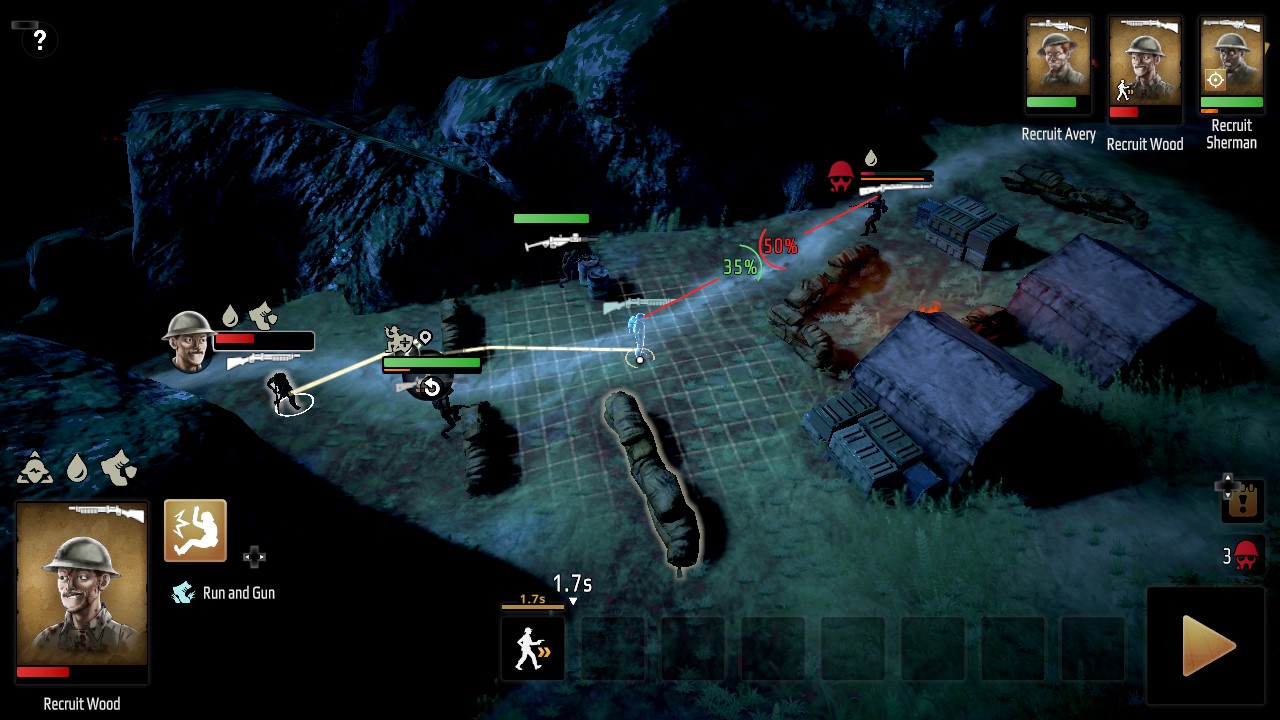 While I always appreciate the efforts game developers put in to create these entertainments and diversions, this one falls a little flat.

Fans of turn-based combat games will enjoy aspects of Broken Lines, but not without a certain degree of aggravation. It has promise, but the story and gameplay could’ve used a little more refinement.