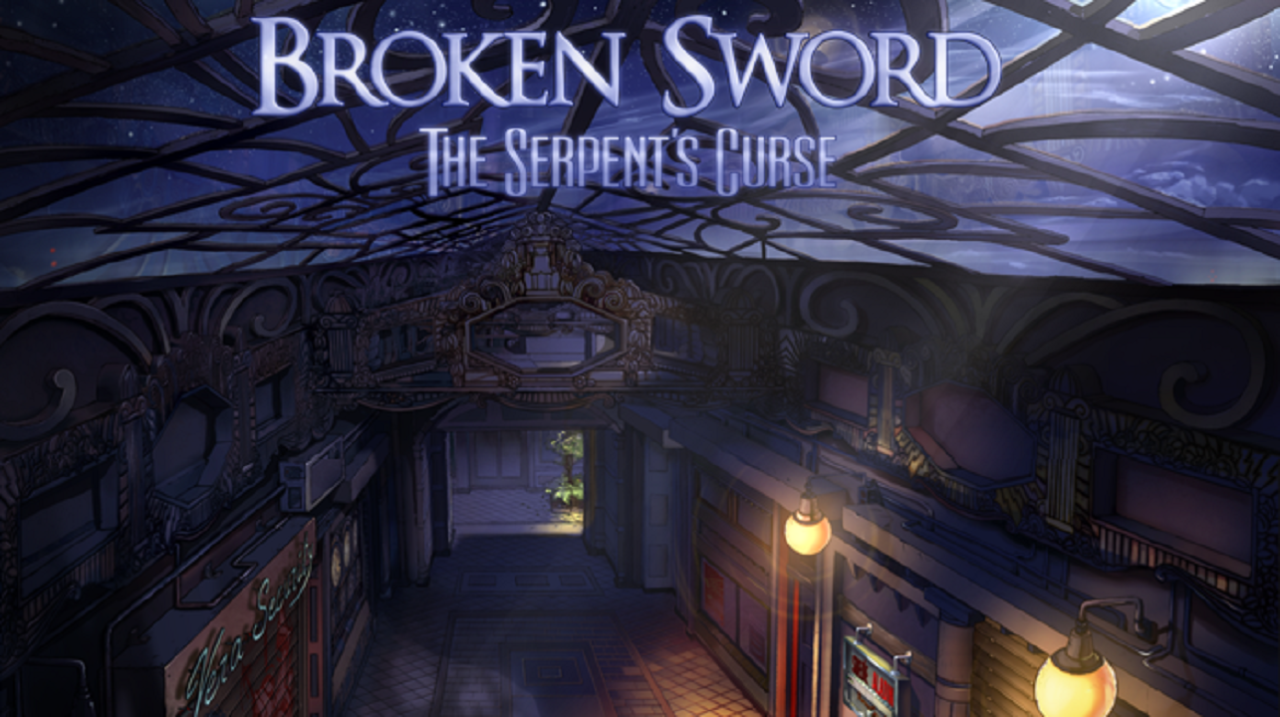 As soon as I heard leading man George Stobbart utter “Paris in the Spring” I knew I was in store for a grand adventure with Broken Sword 5. Yes, full disclosure, the original Broken Sword is my favorite point-and-click graphic adventure of all time, and one of my favorite games in general. So I really get a kick out of all the nostalgic nods part 5 offers up as fan service. Which is a-ok as this Kickstarter success was driven by longtime fans like myself.

I feel a bit of the series history is in order, especially as Nintendo systems have only played host to the first game. If you’re already a Broken Sword veteran, feel free to skip the next two paragraphs. If not, please read on.

The original game, Shadow of the Templars, is widely considered one of the greatest point-and-click graphic adventures ever. Approximately half of its sales came from the PlayStation version, starting the series success in the console realm. It was later ported to the GBA (read PNM Issue #32’s Retro Review) and later still the Wii and DS as a Director’s Cut. These DC versions, while successful, are usually frowned upon by Broken Sword purists, due to the vast amount of original content bizarrely excised! But I digress.

The sequel, The Smoking Mirror, while not reaching the critical acclaim of its predecessor, was still a very good game in its own right, and a success on the PC and PlayStation. Unlike the first game, its re-release was simply a remaster, and it benefits by not having cut content. The third entry, The Sleeping Dragon, changed to a direct control scheme, which alienated some players, especially during action scenes. Despite this, and some repetitive crate puzzles, the game was a critical success, though not matching sales of the first two games. Part of this might stem from the PS2 version not getting a North American release, unlike its Xbox counterpart. Lastly, the fourth entry, The Angel of Death, (also known as Secrets of the Ark) even though returning to the preferable point-and-click format, is considered the weakest. Being a PC only release also hurt it sales wise, as it alienated the console crowd. 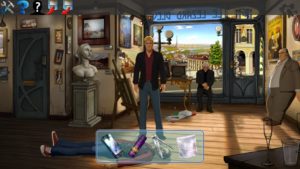 Broken Sword 5 starts with an art gallery theft, turned extra tragic by a murder. George alongside his on-again, off-again girlfriend, French journalist Nico Collard, are soon thrust into a conspiracy. Why do so many who come into contact with the stolen, only moderately valuable painting, wind up dead? George is no longer a tourist by this point, but a well-seasoned traveler who knows his way around Paris. While he is still the main protagonist, there are times when you play as Nico. This isn’t a new element to the series, but it’s done sparingly enough to not feel stale. Both are fun characters, and the interactions they have with the cast, and each other, really drive the game. 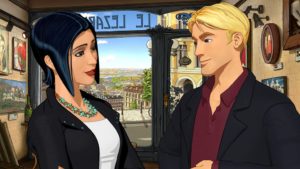 It’s a good thing those two are so well written and likable, as the main story is a bit wide-ranging for its own good. It tackles Gnosticism, a blanket concept surrounding various factions with peculiar views. Despite some interesting ideas, I find the uneven story got weaker as the game progressed. Cryptic mystery gave way to odd religious themes, in a disenchanting fashion. The impression it left me was that the developers were looking to latch on to a mysterious starting point, but the subsequent research was more cursory in nature. 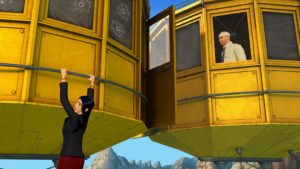 The conclusion especially seems to reflect guesswork, if that makes sense, and asserts preconceived notions. Of course, I’m not going to spoil the ending, but it feels very rushed and not remotely believable. Think of the sort of nonsense you might find in a low-budget Indiana Jones knockoff. I’m a bit surprised to find myself saying this but, even though some might say it’s played out, perhaps Revolution is best to stick with the Knights Templar theme? 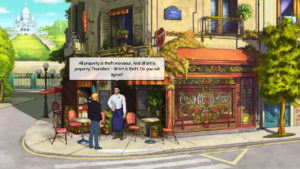 This mix of a broad topic with narrow development led to a disappointing ending, but that is just a small part of Broken Sword 5. The story overall is such that it might encourage players to want to learn more. I know the original Broken Sword made me want to read up on the Knights Templar, long before they became Hollywood mainstream. Part 5 makes liberal use of names many might be unfamiliar with. Lucifer for instance only gets a single mention throughout the entire Bible (some translations). Meanwhile, Jehovah is mentioned thousands of times in early Bibles (and a few modern ones). Both are key in this game. 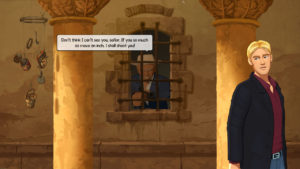 Yes, a consistent story is an important element, hence why I spent so much time discussing it, but it ultimately all goes back to George and Nico. After so many games, I feel like they are old friends. Newbies needn’t worry, as their charm is readily apparent.  It can’t be overstated what an asset Rolph Saxon’s voice work is. I found myself clicking on every single background object just to hear the dialogue he provides George. Important to the plot? More often than not, no. But as a genre fan, I find this greatly important due to the sheer color it adds. Showing inventory items to the rest of the cast to listen to their often humorous dialogue fits in here as well. All the voices are strong in their own ways, and their detailed discussions I embrace – this is catnip to genre fans! 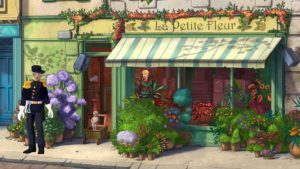 Speaking of, the supporting cast of Broken Sword 5 is largely memorable, something the series has always excelled at. You’ll even get to encounter a handful of characters from the first two games which, again, is great fan service. You don’t need to have played prior Broken Sword games, but it helps and is recommended. The presence of these returning faces doesn’t feel forced either. The range of personalities, and humor every character provides is strong. Their cel-shaded look took a bit getting used to, but this is a game that is very strong overall visually. 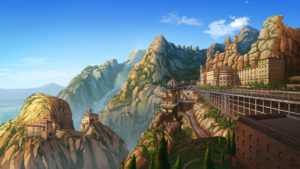 Broken Sword 5 succeeds in capturing the spirit of its pixel art roots without actually being such. Its look is modern, and great as the first HD entry in the series. The color and detail make the backgrounds real works of art.  It’s a joy visiting these locales, as the skill and talent on display is so evident. Minor blood and partial nudity, in some paintings, contribute to the appropriate Teen rating. Some screens are simply to traverse and take in the sights, often accompanied by subtle zooming and fresh or reworked music. It’s beautiful eye (and ear) candy in many ways. However, most of the screens have something approaching a puzzle, whether just through dialogue choices or inventory management. 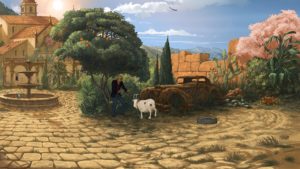 The puzzles in general, while at times challenging, make perfect sense within the style and world that Broken Sword encompasses, and lead to many aha moments. There was a stretch in the second half where momentum does slow – a dreaded musical puzzle followed by a bloated cipher one – but for the most part, these are uncompromisingly traditional genre puzzles with a Broken Sword twist. While those unaccustomed to classic point-and-click games might find many of these puzzles too confusing or difficult, that certainly was not the case during my playthrough. 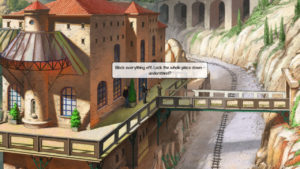 The Nintendo Switch has several strong point-and-click games, it’s true. But while some have tried to re-design the genre, Broken Sword 5 reminds how it helped cement the best of it in the first place. The series has a timeless quality, and part 5 simultaneously offers a celebration of the past and encouragement of heading in the right direction for the future. It hits the ground running to get you hooked, and its weaknesses end up not hurting the overall package, which took me just under 15 hours, as much as you might’ve thought. Throw in some Switch exclusive behind the scenes movies (better late than never for this port) and you have even more of a winner. 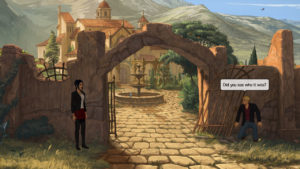 I hope this isn’t the last we see of George and Nico on the Switch. I’d love to see Revolution bring the rest of the Broken Sword series over to Nintendo’s home console. Imagine playing the original classic – not the Director’s Cut – and the remastered sequel on Nintendo hardware. Beneath a Steel Sky would be another gem as well. Buy Broken Sword 5 to get a great game now, and show your support for future Revolution Software endeavors.

The Nintendo Switch has several strong point-and-click games, it’s true. But while some have tried to re-design the genre, Broken Sword 5 reminds how it helped cement the best of it in the first place. The series has a timeless quality, and part 5 simultaneously offers a celebration of the past and encouragement of heading in the right direction for the future. It hits the ground running to get you hooked, and its weaknesses end up not hurting the overall package, which took me just under 15 hours, as much as you might’ve thought. Throw in some Switch exclusive behind the scenes movies (better late than never for this port) and you have even more of a winner.