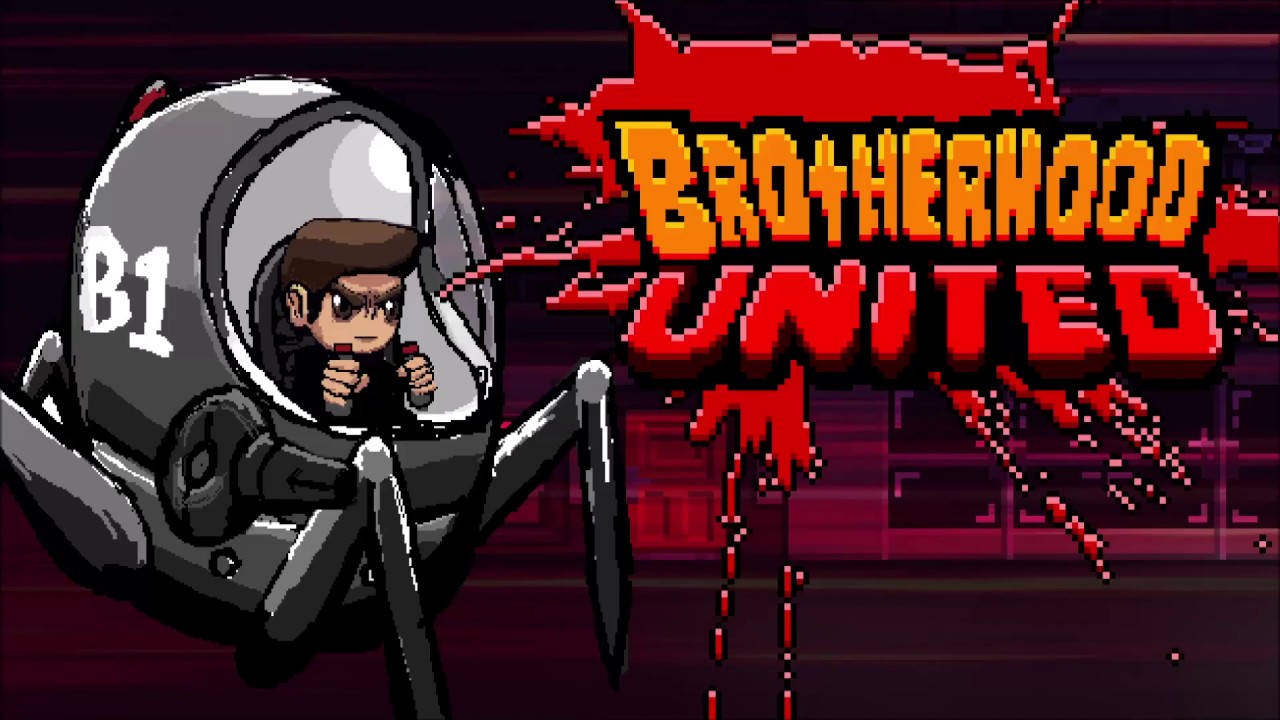 Brotherhood United is a side-scrolling beat ‘em up for the Nintendo Switch. This is not a new genre by any means, with plenty of similar games out there already. This one certainly isn’t groundbreaking, but the good news is there’s probably enough here to entertain fans.

There’s a strong Metal Slug vibe going on here. Perhaps it’s an unfair comparison, since that game seems to have set a high bar for all beat ‘em ups. Or maybe that classic game serves as inspiration. Either way, the comparison can’t be helped, with a similar platforming style, copious amounts of bullets and blood, and captives to rescue. It’s not as good—and it doesn’t look as good—but it plays well enough to live up to its source material.

Brotherhood United features limited options, including the ability to toggle sounds and vibrations. Difficulty settings and language options are missing. There’s a simple character-edit section that provides a little personalization. This lets you tinker with your guy, allowing you to change hairstyle, add or remove a helmet or glasses, or alter your shirt or skin color. The color palette is fairly limited, though. Let’s just say, there’s no pink here. 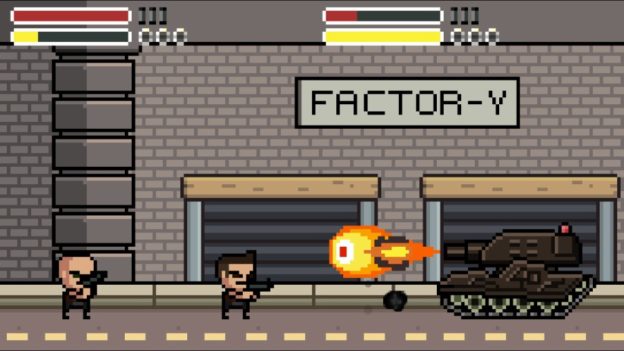 The story is a suitably simple one; you’re a new recruit in the brotherhood, a gang of gun-wielding biker types. When a rival gang attacks, it’s up to you to take them down, exacting revenge and rescuing your bros along the way. The game features some odd humor that won’t appeal to everyone. It’s also quite violent, so be prepared for splashes of red everywhere you go.

There are 20 levels to blast through across several environments, like a cityscape, high-tech area, and a cave. Each mission is ranked, earning you up to three stars. This is based on your ability to stay alive, rescue all prisoners, and sleigh all the bad guys. It also adds a little longevity to the game, since you could be tempted to replay levels to gain the perfect three-star rating for each one.

Enemies are varied and increase in difficulty as you progress. Gang members carry guns or bombs, hide behind shields, or swoop in from above. There are also random mechanical enemies—it must be a high-tech gang we’re fighting here. 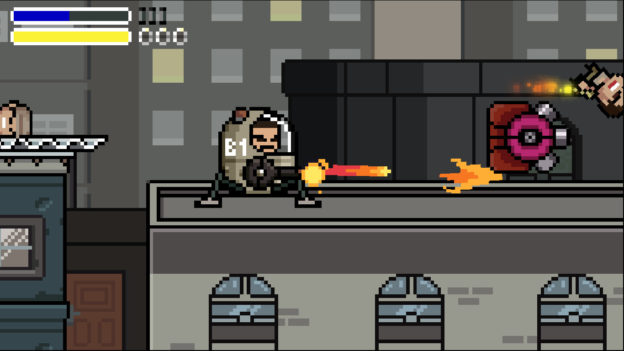 Tricky bosses guard the end of each level. These are well designed, from tanks to giant robots. Most of these battles are fun, with enough difficulty to make you sweat and perhaps retry a few times.

The game doesn’t look particularly flash. Graphics are simple and flat, bordering on bland. There’s not much of a color palette. Perhaps that’s to emphasize the blood splatter, but it presents a pixelated cartoony vibe that generally suits the nature of the story. It’s not great, but it’s not going to stop you from playing, either.

On the other hand, the controls are really good. I found that buttons are mapped well, allowing you to control everything from changing weapons to angling your shots. Some of the jumping can be frustrating, with the occasional platform just out of reach or blocking your way. Nothing that breaks the game, but a little more care could have gone into the level design. 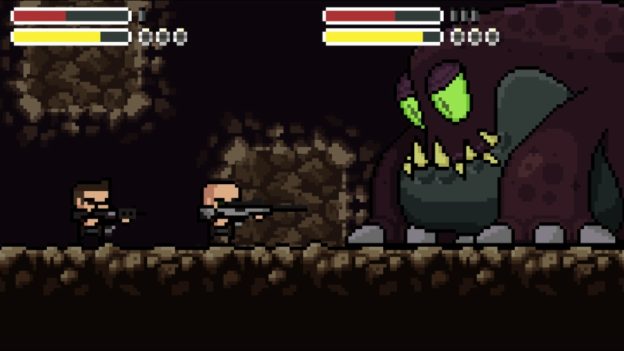 Overall, Brotherhood United is an entertaining beat ‘em up at a budget price. While it’s not perfect, it has just the right amount of run-and-gun action to keep genre fans entertained.

Brotherhood United is an entertaining beat ‘em up at a budget price. It might not be perfect, but there’s just the right amount of run-and-gun action to keep genre fans entertained.