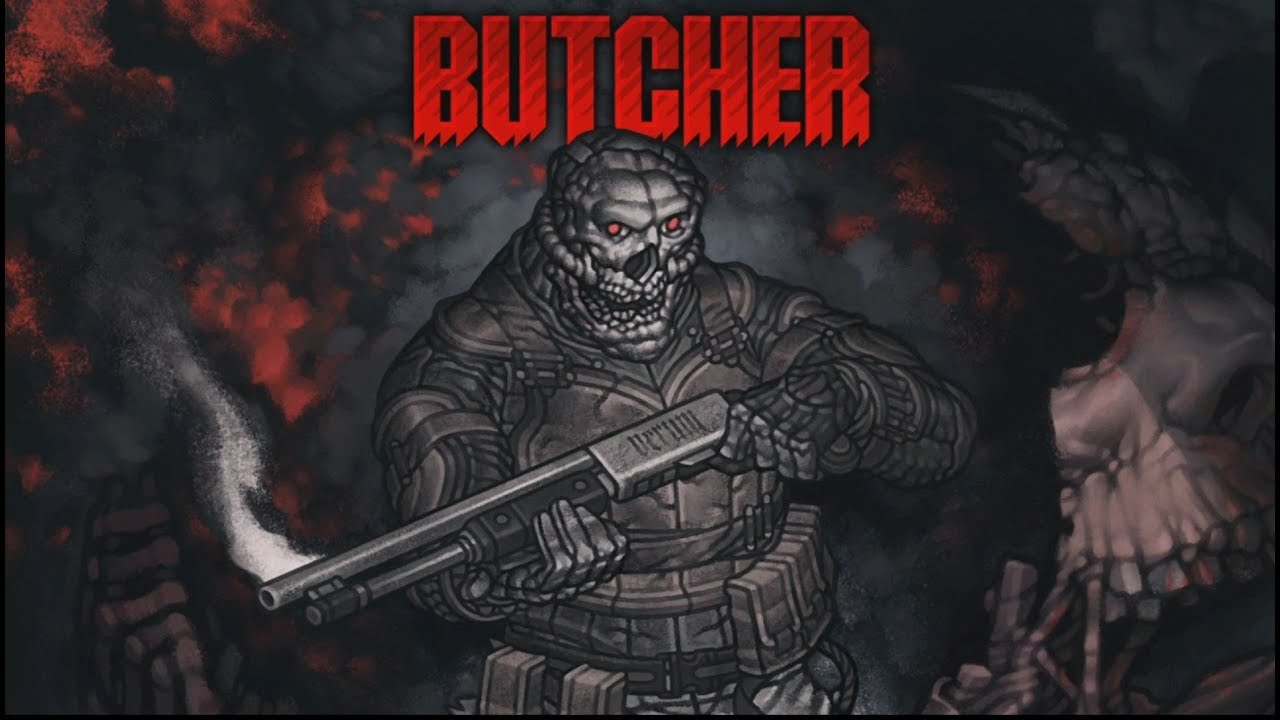 As a 2D run-and-gun shooter, Butcher wastes no time in warning you that you will be having a difficult time surviving its various bloody forms of chaos. Right off the bat before you begin the game, you are greeted with the words “The easiest mode is HARD!” That alone should cause some unease for the casual player, but for anyone else it should lead to what you should expect in this gory, over-the-top experience from publisher Crunching Koalas. Unfortunately, though, while Butcher delivers in exploitative violence and a fun action hook that’s sure to get one’s adrenaline pumping, it sadly wears thin even if the bloody journey is short-lived.
Just as I mentioned before, Butcher is, at times, unforgiving, which means you are going to die a lot…and I mean a lot. The key here is survival and being quick on your toes and thumbs when avoiding dangerous obstacles. The story behind Butcher, though, is quite simple but seemingly told through its chaotic nature. At the start, you control an unnamed cyborg programmed to eradicate the last remnants of humanity with no remorse (essentially, anything that moves on screen is fair game here). From room to room, you will be painting the floor, walls, and ceiling with the blood of your foes as you go from underground hideouts to post-apocalyptic cities. 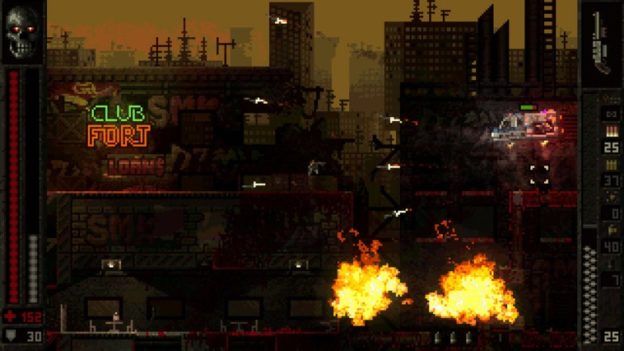 Visually, Butcher’s low-res pixel sprites with its dark and drab colors may seem nothing to admire at first glance. Yet, it soon grows on you as the screen is filled with gunfire and the bloody remains of your enemies. That sounds overly morbid, I know, but that’s just the case with a game where you control a cyborg who wants to enact human extinction. When it comes to the 2D environments, they are well-designed and look far better on a TV as compared to the Switch’s handheld mode. Trust me when I say this, but you’ll want to be playing Butcher on a TV given how hard it can be to see the small sprites used for your homicidal cyborg protagonist and the many enemies you encounter. In terms of its bloody and grim aesthetics, Butcher owes a lot to DOOM. From the musical cues to the screen transitions to its exploitative violence, developer Transhuman Design left no stone unturned with crafting a neat homage to the classic shooter and others in the genre. 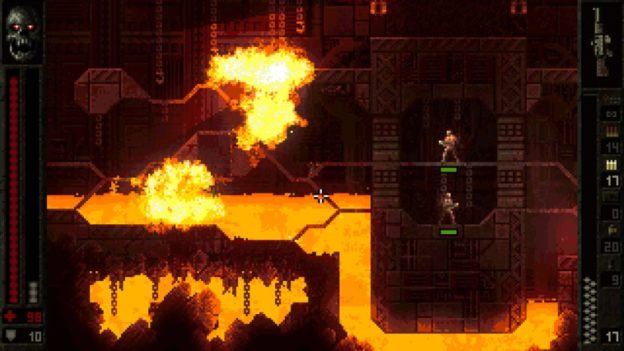 Maneuvering your maniacal cyborg bent on bloody destruction is easy to pick up with its twin-stick control scheme. While using the left analog stick to move, your right stick will be used for quick aiming whether it’s a shotgun, assault rifle, grenade launcher, or a trusty chainsaw that doesn’t run out of gas. Jumping and shooting are situated to both shoulder buttons, which feels smooth and easy to use when moving between platforms and shooting enemies.
This control setup alone is used to test both one’s skill and speed in defeating enemies in quick fashion. You see, there’s no need for short breaks in Butcher or moments where you can take a breather (that is unless you hit pause, which then you are greeted with “Real men don’t pause” to mock you). It’s run, jump, shoot, and hope that a stray enemy you missed in the carnage doesn’t pick you off by surprise. It can be both frustrating and repetitive but satisfying for those wanting to breeze through a level in record time. Overall, think of the gameplay as a cross between Towerfall and the aforementioned bloody atmosphere of DOOM. It’s a subtle love letter of sorts to both, even if the finished product isn’t necessarily your jam. 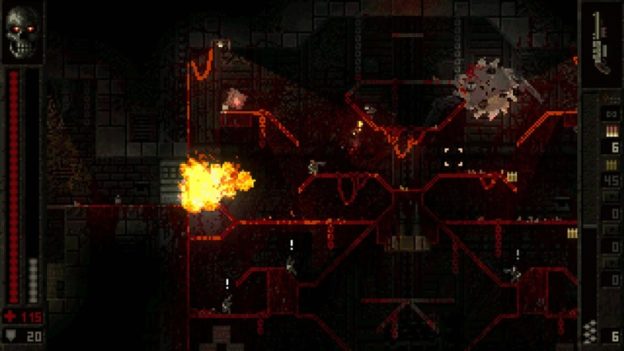 Now the overall mechanics of Butcher’s run-and-gun nature do feel fairly one-note and overly clinging with its dark and gory atmosphere. Yes, it’s brutally over-the-top, but severely lacking beyond killing waves of enemy after enemy in a different environment. There just isn’t much to offer in such a short and slightly forgettable experience that’s meant for a specific type of challenge. Sure, enemies in Butcher are easy to kill with the right analog stick acting as a target option in order to better aim. However, precision is a must when it comes to shooting, or you will see yourself starting at the beginning of each (albeit thankfully short) of the 20 or so levels over and over again. Getting enemy patterns down will most likely be your best course of strategy because one’s quick reflexes will be vital in making it to the next screen. Although, it’s just that with Butcher. It demands your attention but while asking for patience with each level, which for a game of this type doesn’t quite work at full capacity. It’s a game with a neatly executed aesthetic in both sound and visuals, yet I found myself getting either bored or mad with its gameplay mechanics. 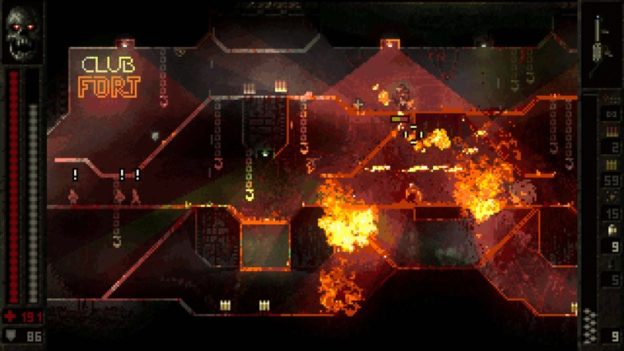 At two to three hours in length, Butcher is a quick and bloody affair that’s sure to please those who want a punishing, fast-paced 2D experience. For others, Butcher is just shallow, cheap with its difficulty, lacks a satisfying conclusion, and offers low replayability beyond those wanting to speedrun the relatively short campaign. While the grim and gory pixelated visuals of Butcher are morbidly entertaining to take in with each level, it simply does has a limited appeal. The warnings alone at the game’s title screen should be enough for some players to heed caution.

Even as a nice homage (visually and audibly) to DOOM and other games of its era, Butcher certainly has its moments in gory, exploitative fashion. However, its high difficulty, low replayabilty, and mechanics make it feel limited and shallow.