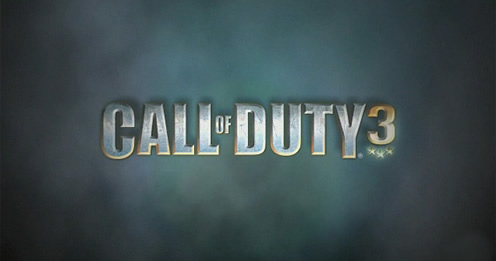 CoD 3 is a great game with fast-paced first-person shooter gameplay. When utilizing the Wii’s motion sensing capabilities; CoD 3 rises to the occasion. It incorporates a lot of moves that you can execute with both the Wiimote and nunchuk. You can do everything from reloading weapons, picking up items, taking control of gun turrets and tanks, and duke it out in hand to hand combat with enemies.

Anyways, the story mode starts off in the European theatre in France. You’re a new recruit and they put you right into the thick of battle. The missions gain in complexity and difficulty as the story progresses. Your superiors will give you more and more responsibility as well. They figure if you haven’t died yet, that you may be able to lead others to do the same. The gameplay revolves around taking out enemies from both far and short distances. Sometimes the battles are extremely fierce (especially in hard mode) when you’re in an open area. You literally have to duck and cover whenever you get the chance; otherwise, you go down fast! 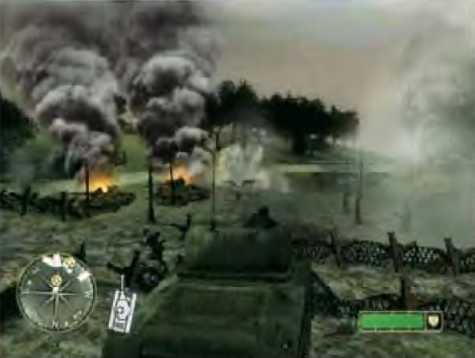 The controls are really smooth and precise. And the aiming is probably the most intuitive of any FPS launch title. The bounding box on the screen is a lot smaller than say, Red Steel. The smaller bounding box allows for more precision aiming while turning. This was a big problem in Red Steel, and CoD3 is leaps and bounds ahead in that department.

Visuals: Call of Duty 3 really has what I call an “immersive graphic style”. It doesn’t have the greatest per pixel detail on textures, but it creates a very “closed-in” feel. The smoke and the design of the towns really add to the immersive nature. I really could care less about the graphical texture if everything doesn’t fit realistically together. The smoke in the game is the best I’ve ever seen rendered on a console. It’s full and really affects your view of the game’s action.

Gameplay: The frantic nature of the battles are a great addition to the Wii’s launch lineup. There is so much volume to the battles that it can be hard to determine who to attack first. The Wiimote and nunchuk are used very well. The controls are intuitive and add to the experience overall.

Replay Value: There isn’t much in the way of replay value. The game does have 3 difficulty levels, but if you beat the game on the hardest difficulty first; then you don’t really need to play the game again. Hopefully multiplayer is a consideration for the next CoD.

Wii Innovations: The Wiimote/nunchuk shine in their first-person outing in Europe. It’s a great way to play the game, and to me, the only way that I would like to play CoD 3.

Verdict: I had personally not played any CoD game before this one. I have to admit that I was impressed after borrowing it from a friend. The game provides enough excitement and a decent playthrough time. I definitely recommend playing it. It may only be worth a rent because of the lack of multiplayer. Whatever you do, go find this game from a friend or rent it online.