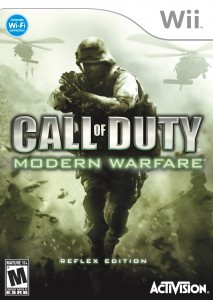 Continuing our season of Call of Duty, Treyarch brings us an ambitious Wii port of Call of Duty 4: Modern Warfare, subtitled Reflex Edition. We first heard about the game only a few months ago and people have questioned the quality even up until the game’s release last week. With no official gameplay videos or screenshots leading up to its release, it’s no wonder why many, including myself, thought the Wii shooter would fail to deliver. However, after spending many hours with the game, I will try to ease some of your worries. 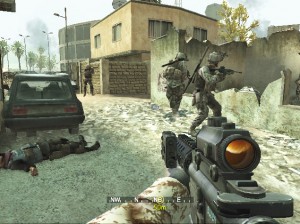 After nearly 2 years, Captain Price and ‘Soap’ Mactavish finally get their debut on the Nintendo Wii. All of the original storyline and details from the original are kept in tact, including the voice acting. If you’ve played any of the first versions of Modern Warfare, you’ll immediately recognize some voices and faces. The game centers around various members of the armed forces around the globe. You’ll take control of characters from the British SAS and the US Marine Corps as you track down Russian Ultranationalist Imran Zakhaev. The missions take place in the Bering Sea, the Middle East, and the Ukraine. Modern Warfare is known for its very action-oriented gameplay and Reflex Edition carries that tradition as well. You’ll find yourself crashing in helicopters, on sinking ships, and many other events where you’ll have to think fast on your feet. While the game can be completed in less than 10 hours, the campaign can be played in different difficulties that will significantly add to the time played and your frustration.

One of the key differences in Modern Warfare: Reflex Edition, is the addition of the Wii remote and nunchuk controls. The Wii remote is used for aiming, while the nunchuk is used for movement and reloading. These controls can be completely customized as well and it even allows for increasing levels of sensitivity. For the most part, the controls are a welcome addition and definitely increase the ease of play over other console versions. The Wii’s control system is especially helpful for multiplayer and creates a much more fast and frantic experience. 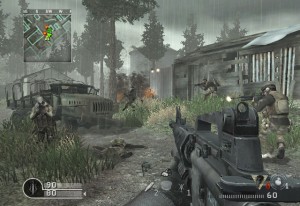 Now let’s get down to the graphics. We all know that Reflex Edition wasn’t going to be able to achieve exactly the same quality of the previous versions’ graphics, but I think you’ll be pleasantly surprised when you see the game in motion. If you’ve played a previous version of the game, you’ll definitely notice the graphics are more jagged and the background detail a little lacking. But I think you’ll notice that Treyarch spent a lot of time trying to push as much as they could out of the Wii version too. Some areas that really show off some of the nice visuals are buildings with open rooftops. You’ll see the light shining through and you’ll notice shadows that are cast as a result. It’s not the most dynamic lighting system, but it looks much better than most people initially speculated. One of the real issues I was worried about was a consistent framerate. While not 60 frames per second all the time, the game does keep a solid 30fps and rarely dips below that, even when there’s a lot happening on screen. Overall, the graphics really hold up better than I expected. 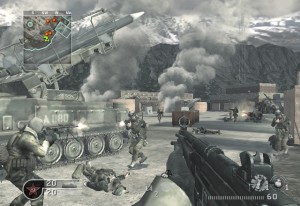 The multiplayer mode in Call of Duty: Modern Warfare Reflex Edition is by far the biggest reason to own this game. The sheer number of unlockables, upgrades, ranks, levels, guns, and gear is enough to keep you busy for long time. As you play, you’ll be able to unlock various items and weapons by completing large kill streaks. You’ll be able to use helicopters, UAVs, and all other units from the first Modern Warfare. They really went all out in ensuring that the multiplayer experience in Reflex was just like the original. It also features unlockable classes and many different multiplayer modes such as Free for All, Team Deathmatch, Domination, Sabotage, Headquarter, Search and Destroy, and Arcade. Most multiplayer games on the Wii so far have been hampered by poor connection/matchmaking systems. With Modern Warfare: Reflex Edition, I logged in and was in a server within 10 seconds. You can choose to create your own server, join another server with a different mode, or continue in your current lobby and hop from match to match. It’s really a slick system and features the same interface as the previous versions. 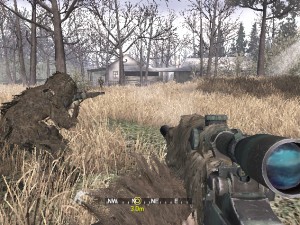 Each match will yield experience points based on your performance and you’ll be promoted to different ranks the more experience points you achieve. And utilizing the Wii remote and nunchuk makes the multiplayer experience the best on any console. Reflex addition has support for up to 10 players in each match and also features enhanced Host Migration from the previous versions. 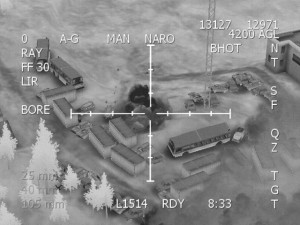 My expectations were certainly low for Modern Warfare: Reflex, but I feel that Treyarch did a fantastic job ensuring the core elements of the gameplay were kept fast and fun. The graphics are definitely better than expected but the gameplay really enhances the experience to the point where you won’t think about the number of polygons that much. You’ll stop caring about resolution and remember that this is a port of one of the best games this generation. My only wish is that the game retailed for $39.99 instead of $49.99. Other than that, Call of Duty Modern Warfare: Reflex Edition is a solid game with some of the best online multiplayer of any Wii FPS.

Call of Duty Modern Warfare: Reflex Edition gets a 9.2/10