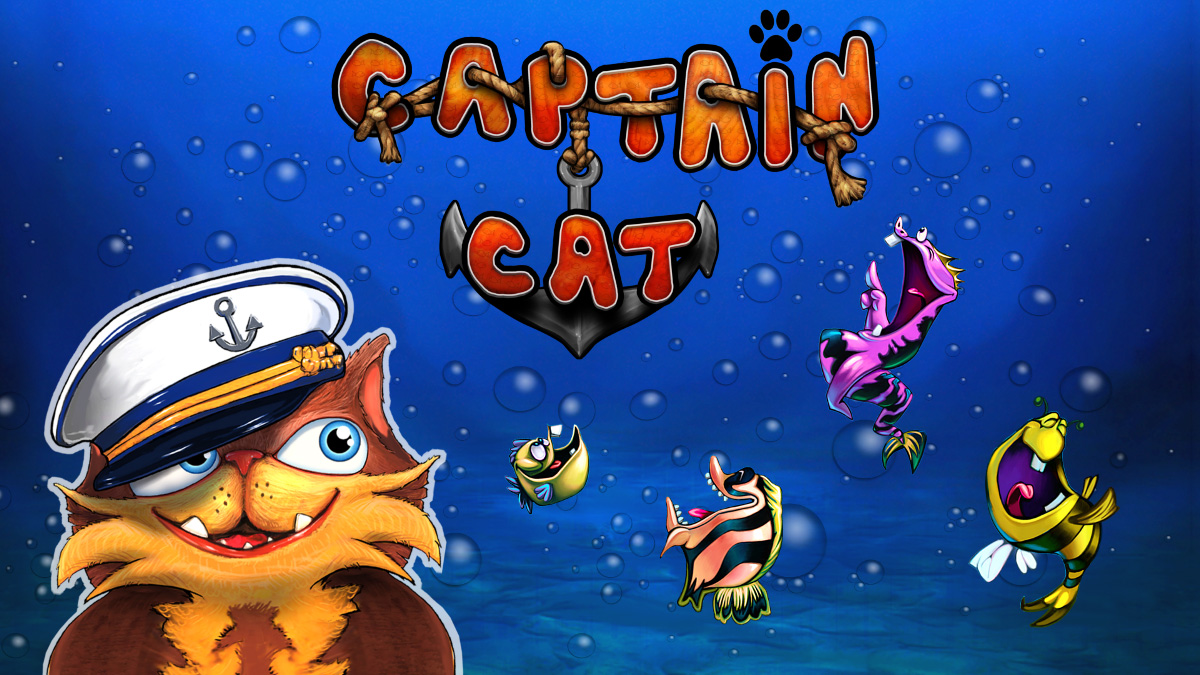 Captain Cat isn’t the brightest of felines. Yes, it’s impressive he’s learned how to pilot a boat, but he fishes with its anchor. He’s also really bad at hauling in the fish he manages to hook. That he refers to himself as Captain Cat despite the lack of a crew is also somewhat troubling, but I’ll let that go to focus on the game at hand.

Captain Cat is an arcade puzzle game in which you must guide an anchor through an impressive array of aquatic obstacles in order to hook a fish that always gets away before the Captain is able to haul it in. Many video games are Sisyphean in nature, but poor Captain Cat goes to such lengths (depths?) to even catch the fish that it’s especially heartbreaking to see him go hungry level after level.

The gameplay is pretty simple. You sit in your boat above a reef where a lone fish is hiding. Each reef provides a path to the fish, and you guide your anchor to it by pressing the A button on your controller; release the button and the anchor stops moving so you can reset its direction. 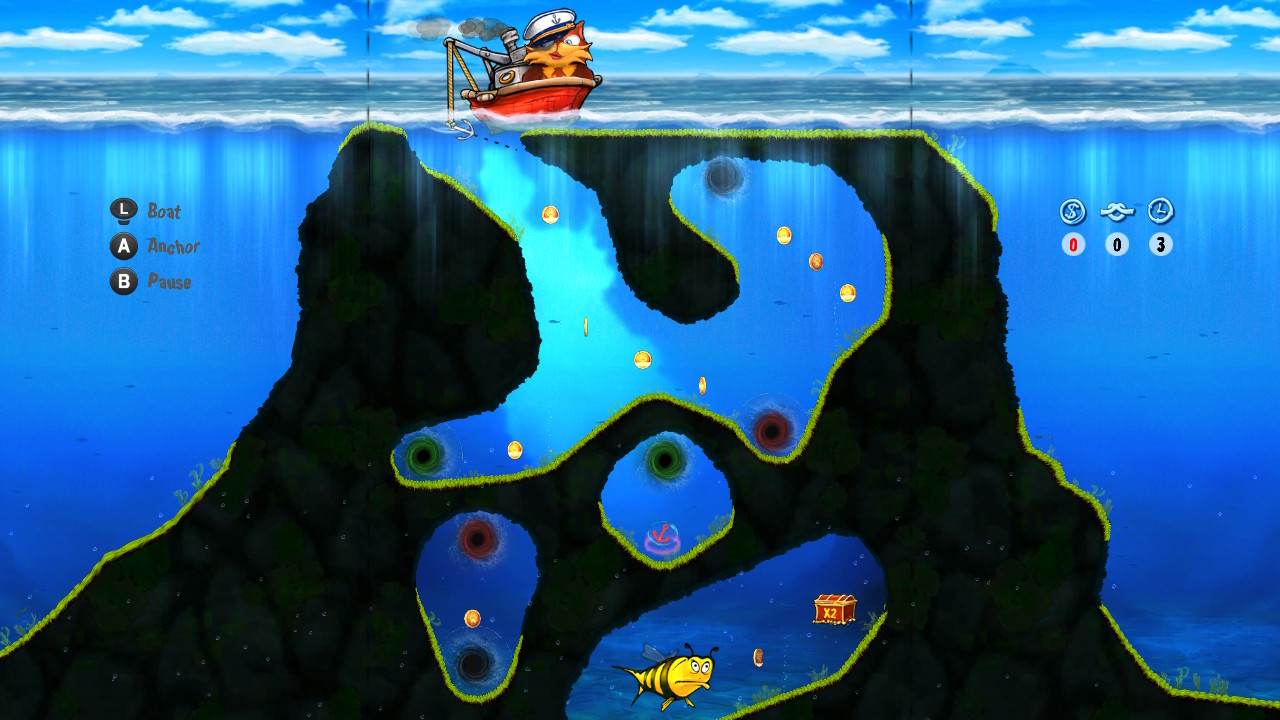 Two elements present the challenge. First, the anchor swings like a pendulum, requiring you to press the button at the right time in order to move in the desired direction. Second, as one would expect in such a game, the path to the fish is fraught with obstacles, currents, warp points, and other nasties to block the way. If your anchor hits the wall of the reef, for example, or if its line is clipped by another fish, it will break off and you’ll have to start again from the surface.

As such, hooking the fish requires a balance of planning, timing, and execution. Captain Cat does a good job of explaining the game’s mechanics as new obstacles are introduced, usually providing you with a couple of very simple puzzles before progressing to the much more elaborate layouts with which you’ll have to contend. Obstacles grow in number and in types of behavior, making those three-star awards quite difficult to obtain as the game progresses. 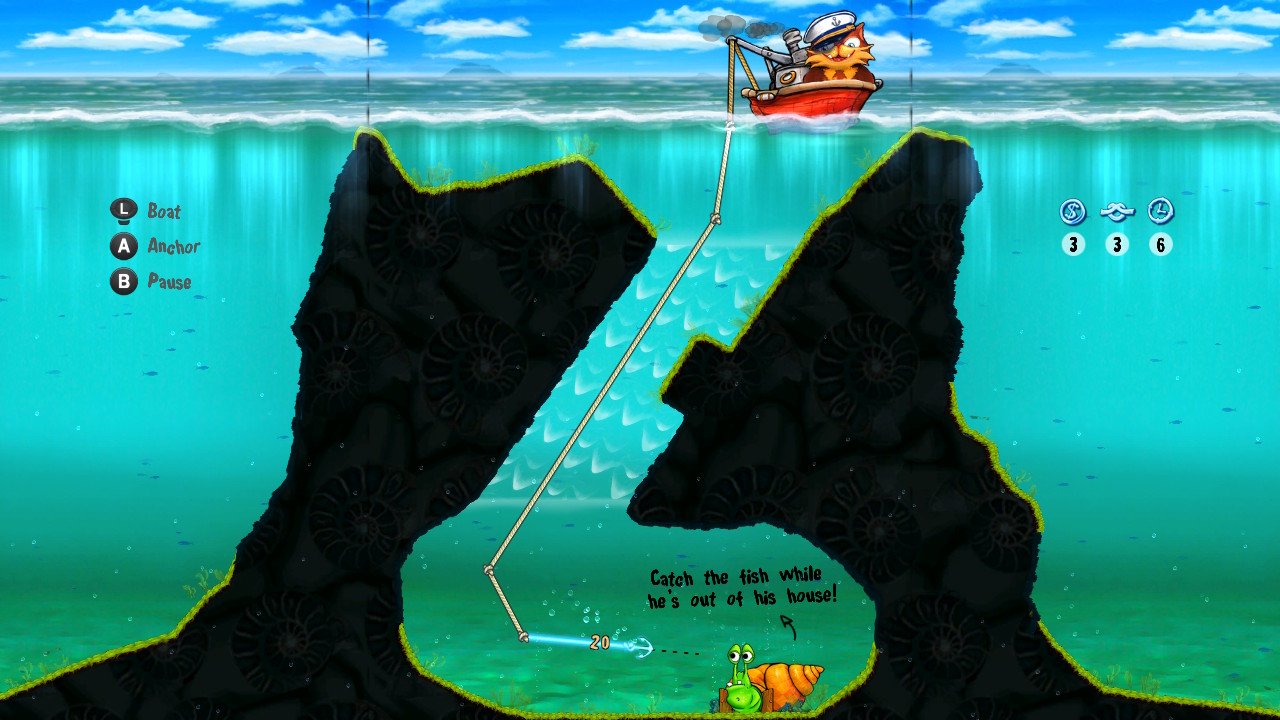 It’s often simple to hook the fish, after all, but your rewards for doing so based on A.) the amount of treasure you collect along the way, B.) how many knots (or stopping points) you create on your anchor line, and C.) the amount of time it takes you to hook the fish. You need to obtain a certain number of stars in order to unlock new areas in which fish, so you may find yourself replaying levels just to improve efficiency. And when you’ve finished the game, there are some additional fun challenges to tackle. One is a puzzle game in which you must figure out how to reach the fish in one shot (no knots), and the other tasks you with dropping the anchor as far as possible without hitting an obstacle for being overtaken from above. 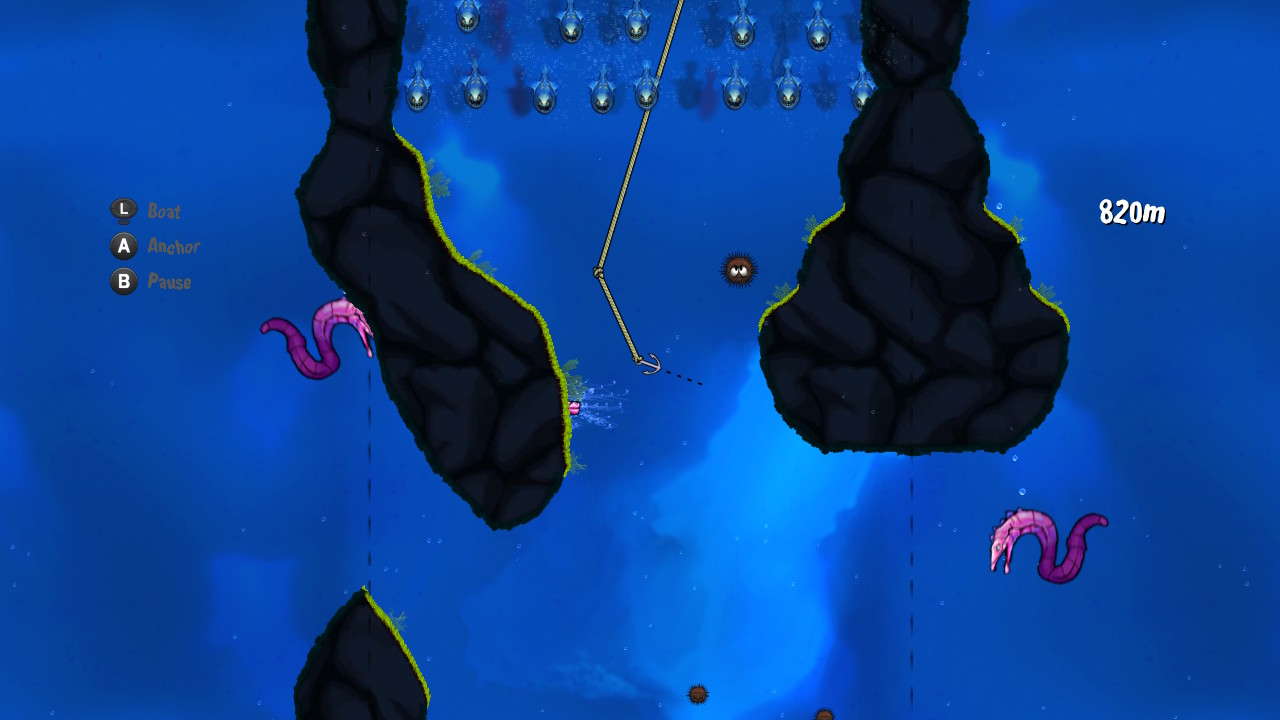 The simple gameplay mechanics of Captain Cat make it accessible to all ages, and its “one more level” addictive nature carries on longer than I would have expected. It’s hard to blame the game when you fail to get the cat his never-to-be-eaten dinner, as everything you need is right there. Rather, it’s your timing, your anchor placement, and your execution, and those can be quickly corrected, right?

That’s not to say Captain Cat isn’t frustrating at times. The warp points often exit so close to the reef walls that it’s difficult to stop your anchor before it’s too late, and the limited swing of your anchor means you can’t move upwards to avoid the seafloor or other obstacles. Still, it never feels like the game is cheating you.

The graphics in Captain Cat are nothing special, but the simple, clean level layout makes the game easy to play in portable mode. In fact, that’s probably the best way to play it as the puzzles feel more natural on the smaller screen. It’s also a game that’s better played in short bursts due to the overall sameness of the levels. As for the audio…well, that opening screen song is certainly worth hearing. Once.

Captain Cat is an entertaining, addictive puzzle game that’s great for killing time, be it while riding down the highway or after rage quitting your other games. It won’t provide you a reason to leave dinner unfinished so you can race back to it, but the time you do spend with this fishing feline will be fun.