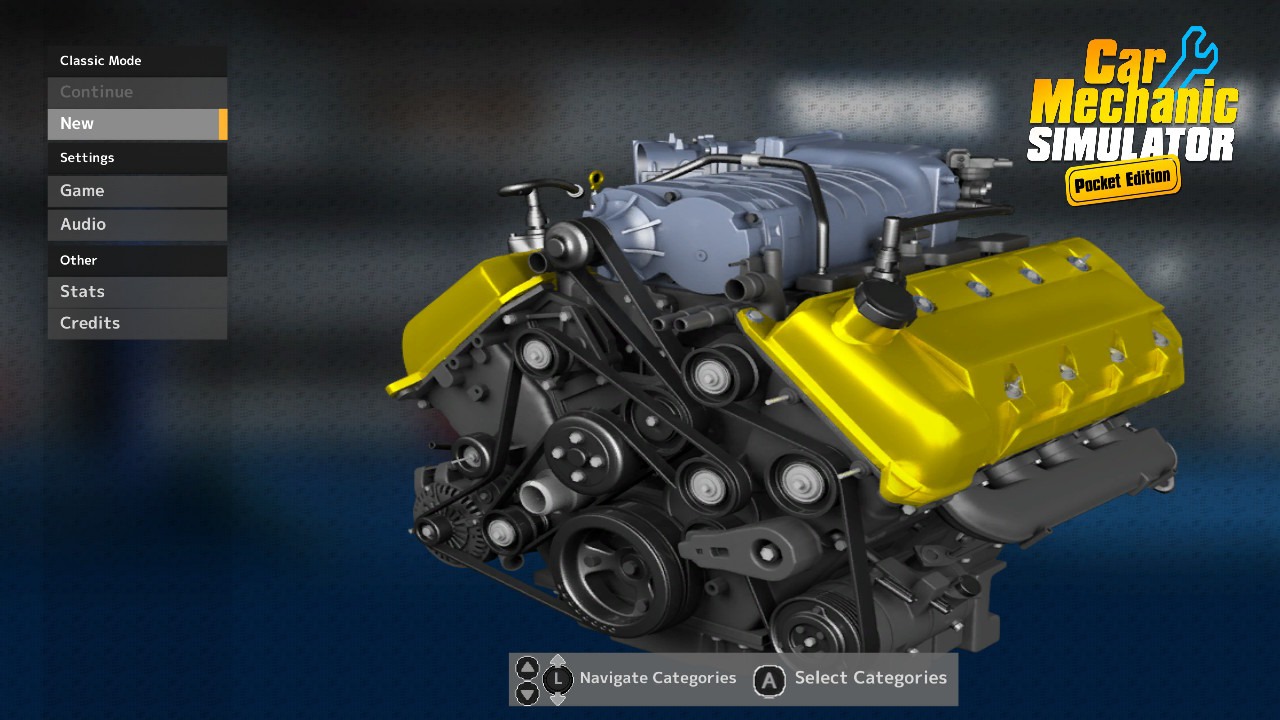 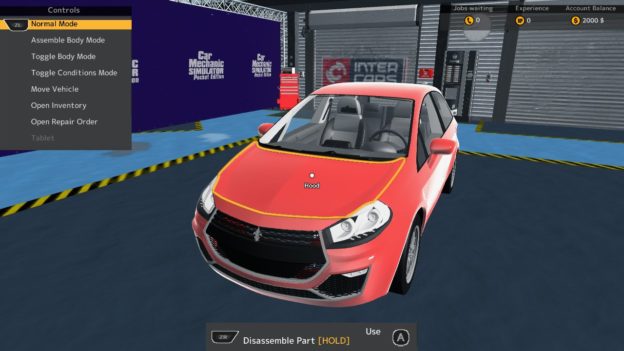 The main menu allows you to continue your game or start a new one. There’s only one save file and I started a new game twice. You have the option to go through the tutorial, which I attempted to do twice and couldn’t get through it. The tutorial doesn’t explain anything to you other than the buttons, which are already listed for you in the regular gameplay. I couldn’t get through it, so I began a new game and it was much easier for me to learn the ropes of the gameplay mechanics without being limited by what the tutorial was trying to get me to do.

The game is in a first-person mode. You use the left joystick to move your character and the right joystick to look around the room by moving a small dot resembling a cursor. You also use this to hover over things and click on them. 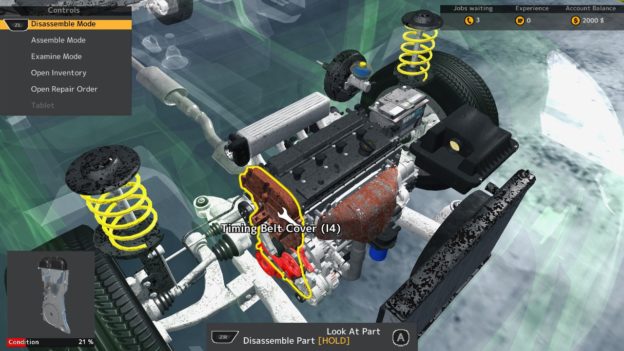 The A button is used to click on things such as the phone to accept or decline jobs or the computer to buy car parts or apply for a bank loan should you start to run out of money. It’s when you start working on the cars that the controls are weird. When looking at a car, there are a lot of different things you can do – disassemble parts that are broken, assemble new parts, examine what needs to be fixed, open your inventory, or check the repair job, just to name a few. ZL is next to all these options, so I assumed I needed to use ZL to choose. This is technically the case, but you need to use the D-pad on the left Joy-Con to pick an option and then press ZL to activate that option. The A button is used to click on everything else, but that. When working on the cars, the ZR button is used to perform actions such as assembling and disassembling.

Every button on the Joy-Cons is used when I felt like there should have just been one button assigned to a certain task and that’s it. The controls are confusing as first and while it’s not too big of a deal, it’s more annoying than anything else. It’s a lot to remember for a simulation game. 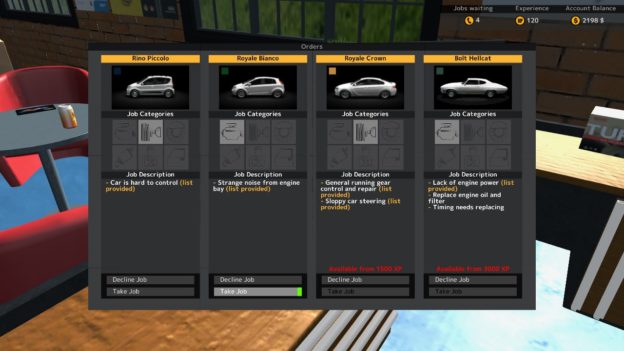 There’s not much meat to the game either. You accept a job using the phone, a car appears in your garage, and you fix it. By fixing it, I mean looking for rusted parts, disassembling them, buying a replacement part through the computer, then assembling that into the car. There is a percentage that shows up when you hover over parts that will tell you how broken it is. For example, if a part is 72% and in yellow, you don’t need to touch it. If it’s 2% and red, you need to fix it.

I went through the motions of doing just that. Phone, disassemble, computer, assemble, rinse and repeat with the next job. It was tedious work and I felt no accomplishment from it. Yes, you earn money for each job so that you can buy more parts for the next job and there are also experience points to be earned. This can be used to upgrade your tools and your garage, such as adding a paint shop. However, these upgrades cost EXP in the thousands. I earned 120 EXP after my first job. The game didn’t hold my attention enough to play that long to rack up my EXP. 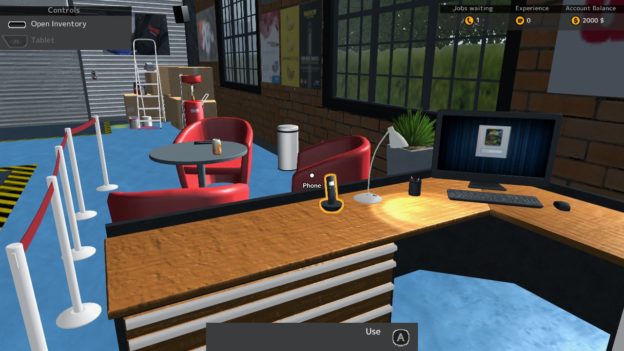 This game is listed as “lifestyle” and “practical” though I still can’t tell you anything about cars. I didn’t expect to learn anything from this game, but the names of the parts were a foreign language to me and I certainly have no idea what any of the parts do. I didn’t know where the parts were, so the examine mode came in handy for me. The ones I needed to fix were highlighted in red and the ones I already fixed were highlighted in green. Maybe this is on me though because I don’t have any knowledge of how cars work. Maybe, if you love cars and have this knowledge, the game would be a better experience for you.

The aesthetic of the game wasn’t too bad. The graphics weren’t the best, but they were good enough for this kind of game since there’s no scenery to look at. You’re mainly just looking inside cars.

I could have done without the music though. I know car mechanics listen to the radio while they work on cars, but the songs choices were a bit odd to me. It felt the same handful of songs looped like they didn’t add enough music in. The music they did put in, seemed out of place for a simulator game. I could have done without the female singing for someone to take her home tonight. 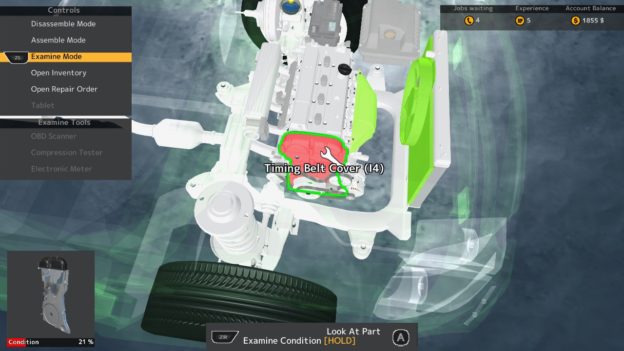 All in all, Car Mechanic Simulator Pocket Edition was a poor game for me. The controls were smooth and responsive, but there was no need to use every single button and to have some of those buttons have multiple functions. The car knowledge was lost on me but the gameplay was overall tedious and even boring after 20 minutes of playing. For $19.99, I would pass on this game.