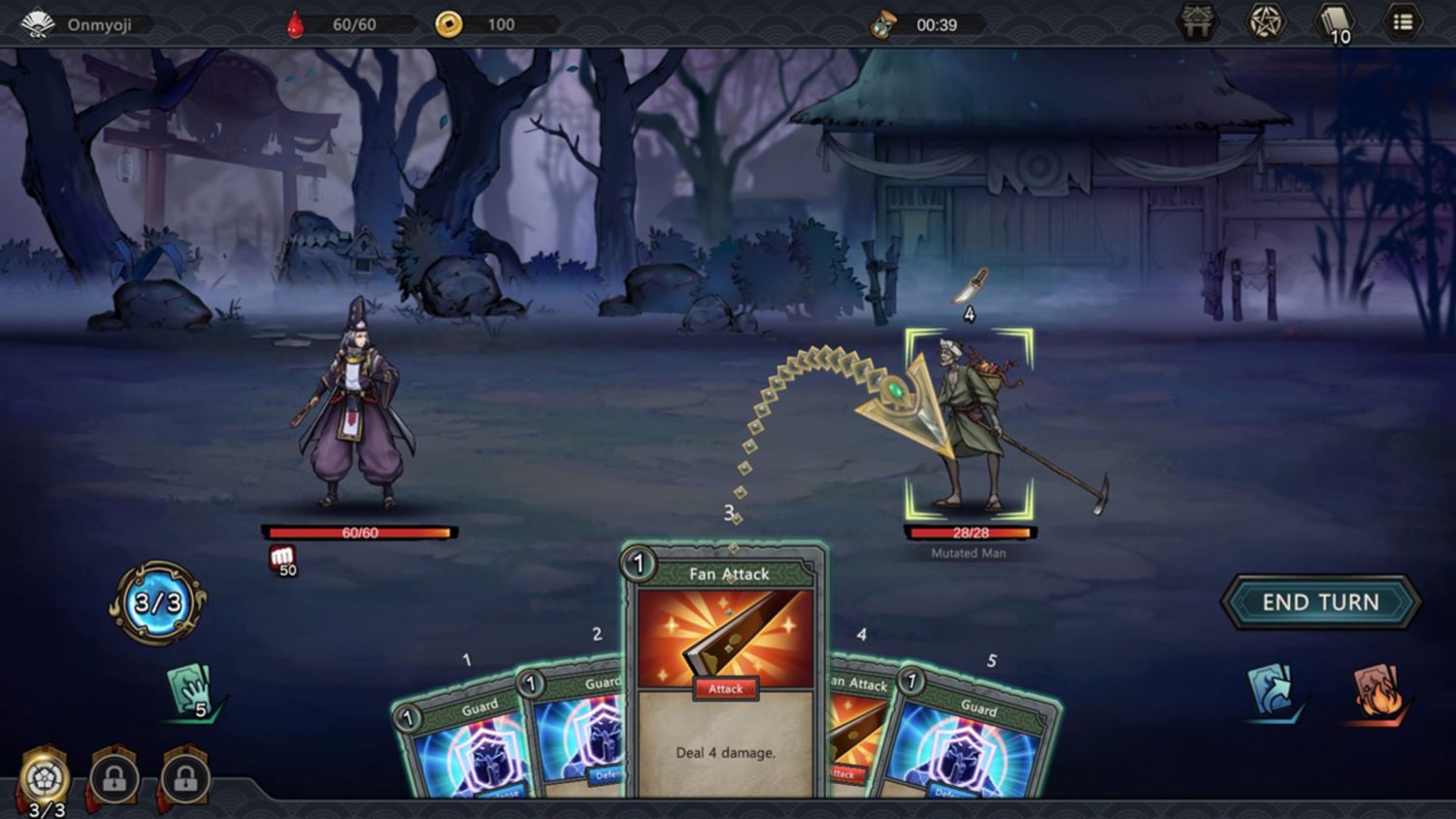 Build your deck, unveil the truth.

It’s time to go back in time and take on a quest to investigate the goings-on at Castle Morihisa. This title is a rogue-like-card/deck-building-turn-based game. I know, I know—we’ve seen this sort of thing before. While many elements of Castle Morihisa will look familiar, the game’s depiction and characterization of feudal Japan really make it something interesting all on its own.

As far as the surface elements are concerned, you get some nice imagery and a rather pleasant soundtrack. The artistic style is a bit like classic anime, which is also a draw. Unfortunately, there is almost nothing in the game with regards to movement. The combat is turn-based and uses a card system, but there are no animations. The visuals are nice and the music adds the appropriate atmosphere, but it would have been nice to have some movement, even if it were something like a standard attack segment (like the combat animations for Fire Emblem Heroes, maybe). Still, combat turns don’t take very long, so you are at least kept busy trying to stay alive. 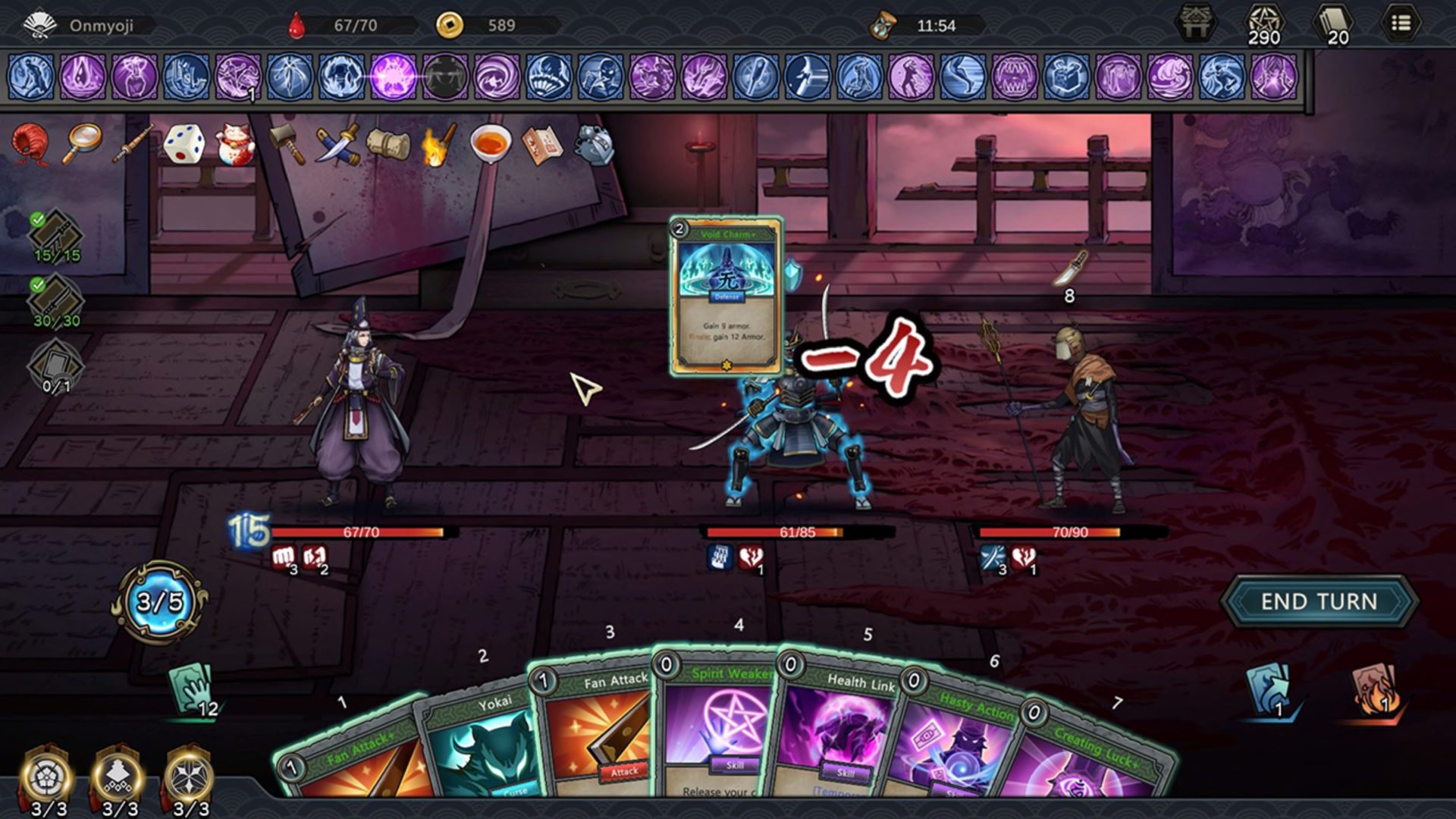 As we dig a bit deeper, we see some interesting characters you can choose. There are four player types: Monk (balanced with attack and defense), Onmyoji (uses fan as a weapon, plus magic use), Samurai (“who’s the tank?!”), and ninja (which is locked until your first win of the game). As expected, each class has its own set of skills and methods. With each class, you get different cards in your starter deck. All classes have access to Item cards and General cards, but the rest are class specific. There is also a plethora of baddies (undead people and monsters that range from garden variety mutants to some twisted critters), fallen heroes who can add a combat buff when activated, and artifacts.

To help keep things interesting, the game provides a skill tree for you to use to refine your hero. The bad news is that the skills are arranged randomly in the skill tree every time you start a new pass at the game. This does keep you on your toes, but it doesn’t help to maintain a path of progression or reliable set of skills you want to use to beat whatever baddie has you stumped. 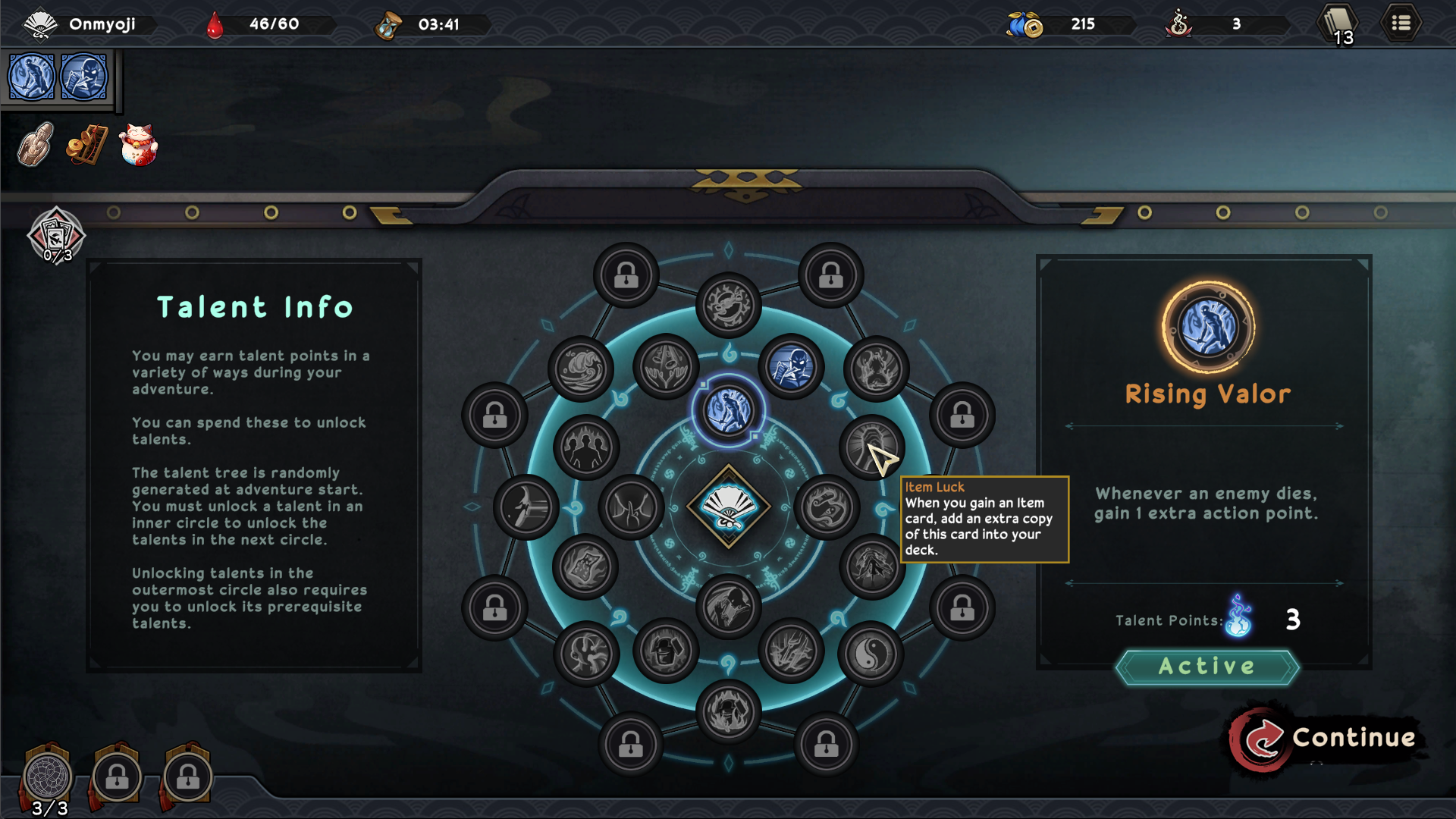 Speaking of starting over, watch your health points closely. This game does not have a handy health potion waiting for you with every encounter. No, no—you have to either have a card which allows you to steal your opponents’ health or find a place to camp after your last encounter. If you do get the option to camp, you recover health, but not necessarily all of it. I did find one other alternative; the game may provide you an encounter option where you get to eat some berries you find at the roadside. The game will offer a fun set of options; one bite replenishes only 10 points of health, or you can choose to regain full health as the expense of reducing your total possible health points (ouch). The game will force you to make some interesting choices.

Another type of choice you make on your travels is which encounter to engage. When you finish an encounter of any type, the game takes you to the map. There appears a dotted line and a set of option banners. There may be two or three banners, sometimes of differing types, and you have to pick one as your next encounter. Of course, these are randomly generated as well. You might get a camp for resting, a treasure chest where you can claim a reward or artifact, combat with some generic soldiers, or an elite combat where the baddies get tougher and more interesting. 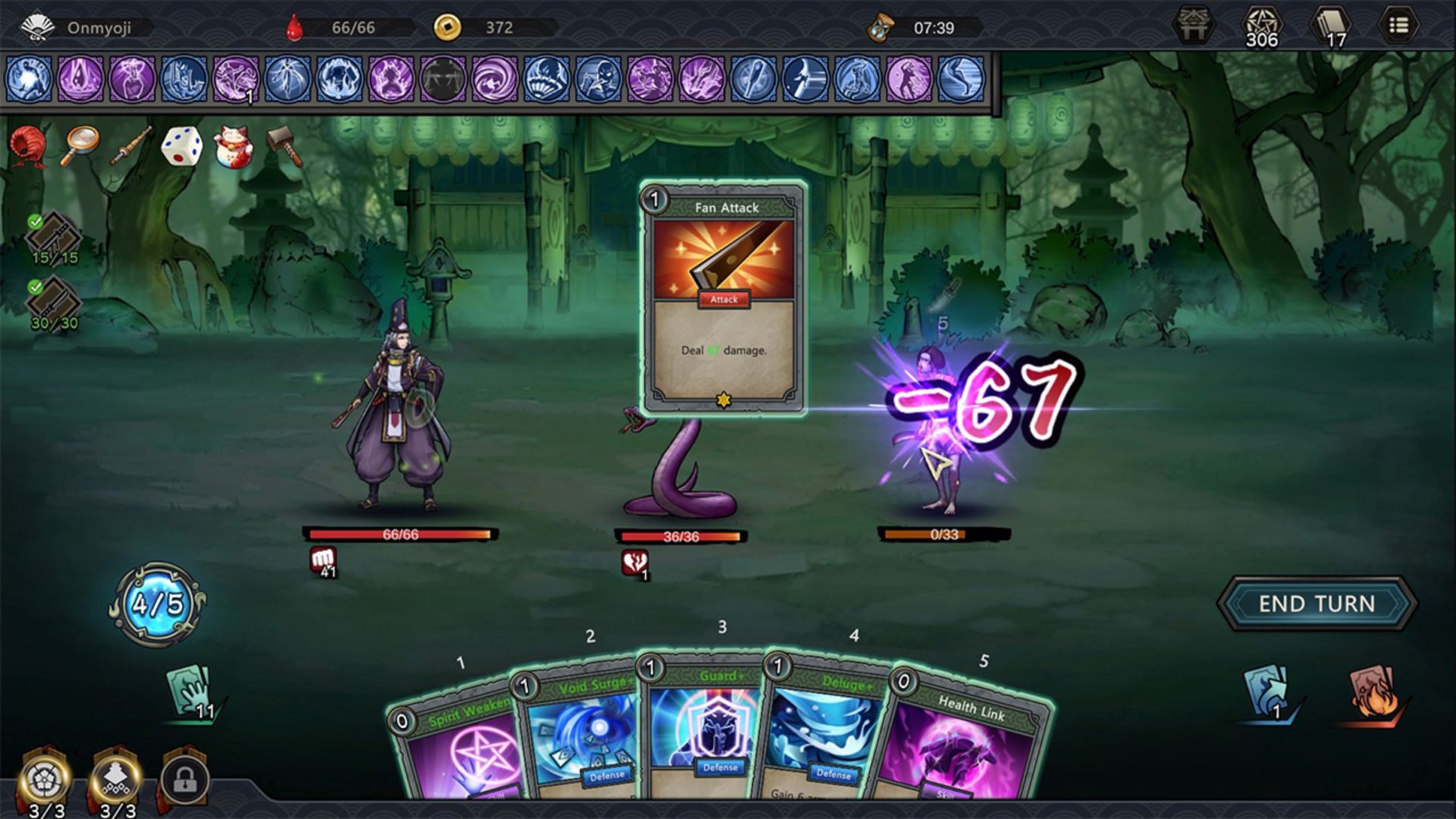 The deck system is pretty good, and you get what you’ve come to expect from these games. Some entry level cards don’t do a great job of winning until you can collect enough new, better cards, but you will get some time to upgrade them. Interestingly, you have access to cards which you can use only once per combat session and then are assigned to the abyss. On the upside, there is another card which, if you get it, can pull cards out of the abyss, and another special card which stacks damage based on how many cards are currently in the abyss. Sometimes it seems a bit convoluted, but it does provide some interesting options for strategies. Based on your player class, you have access to cards for attacks, shields, swiping opponents’ health, swiping opponents’ shields, summoning ethereal beings, and so on. Tuning your deck is critical to success, as is curating a good set of skills on the skill tree. 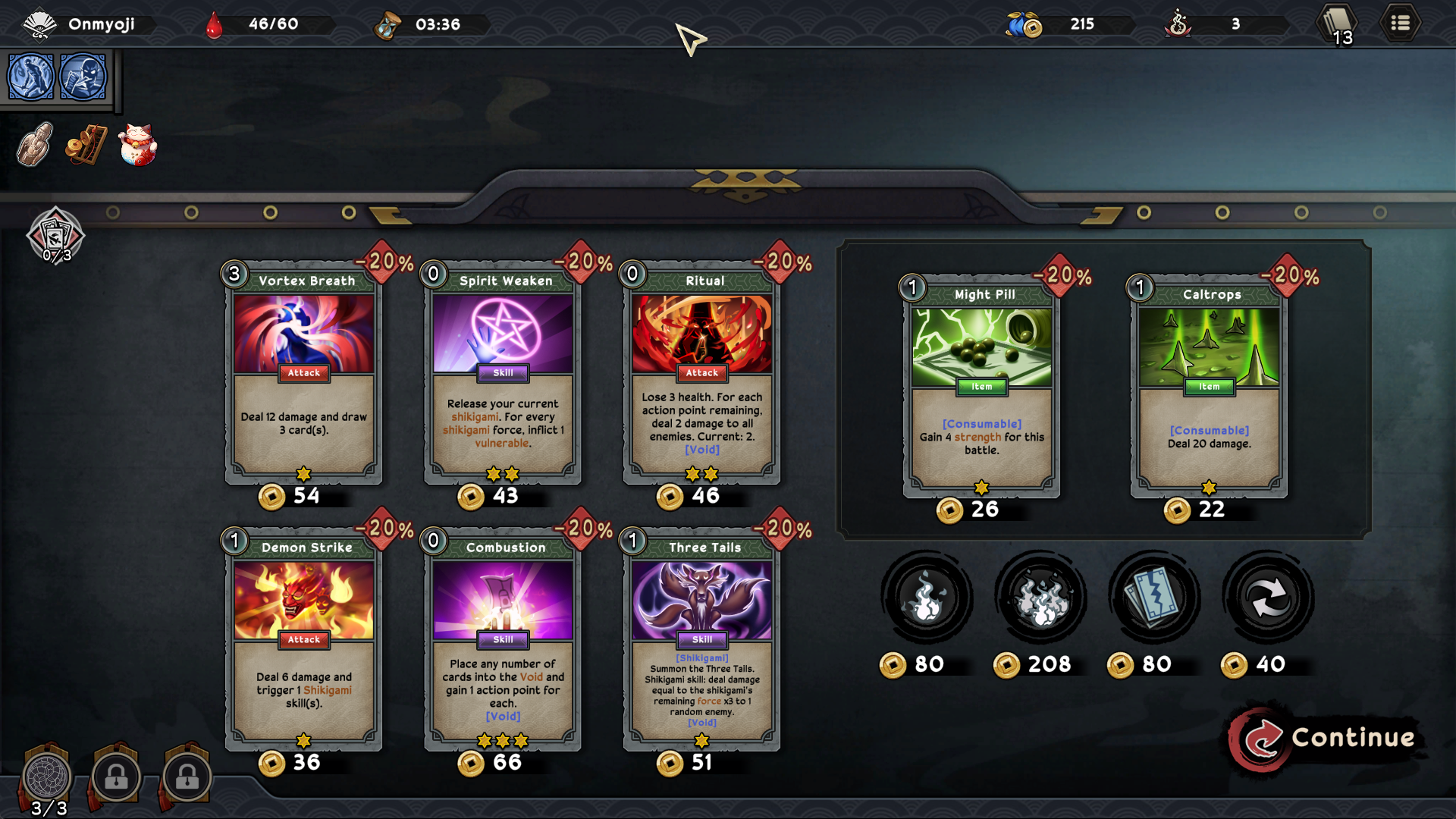 Castle Morihisa offers a well-tested system, good graphics, a cool soundtrack, and some interesting monsters. What it lacks is some motion-based action to go with the cool graphics and some explanation of certain effects. It might also benefit from a static skill tree and some additional story elements. Another up-side factor is there are four good character classes with enough differences to make multiple play-throughs different affairs. This also leads to getting a lot of value for your money. At the time I’m writing this, the game is going for $14.99 and it is worth the cost.

Castle Morihisa is a deck-building strategy game with plenty of pros and only a few cons. The cons do not weigh so heavily that the game isn’t fun. It isn’t the best at everything it tries to do (most which you’ve seen before), but it is an enjoyable game.