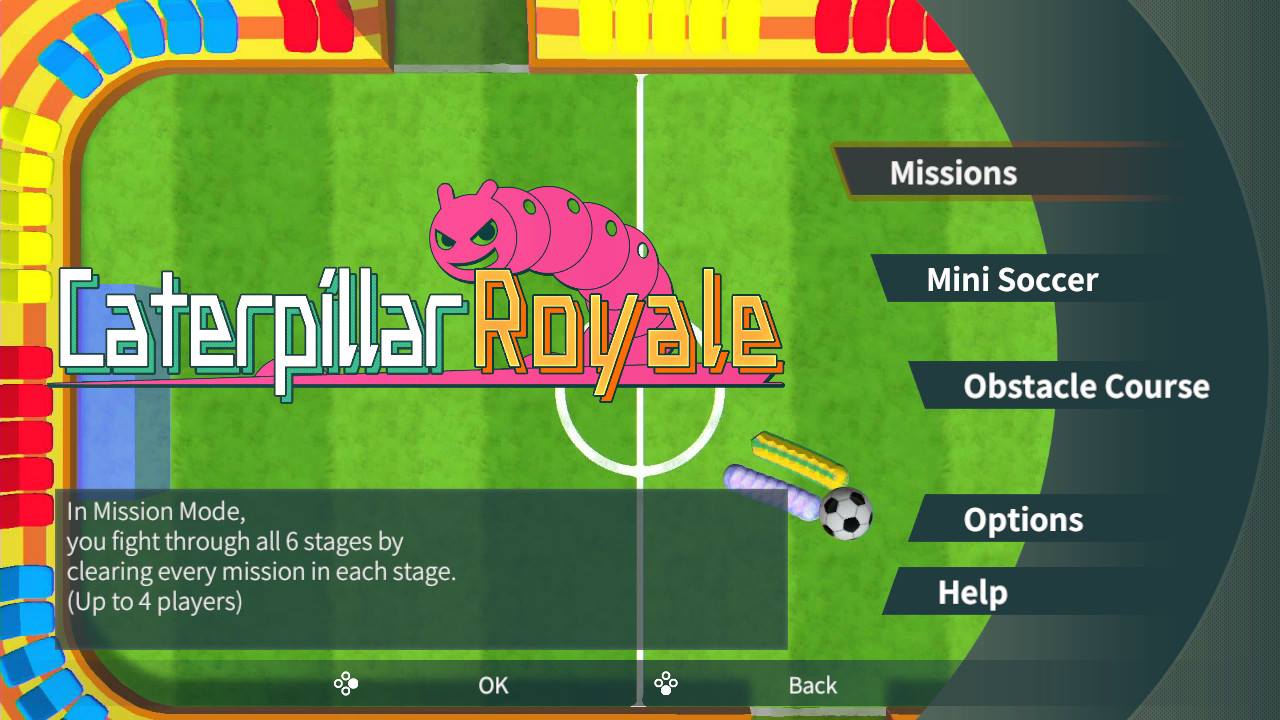 Caterpillar Royale is an action, party game from Starsign. This game has three different modes, some of which allow up to four players. However, while it seems like there’s a lot in this game, each mode will only last just a few minutes of your time. 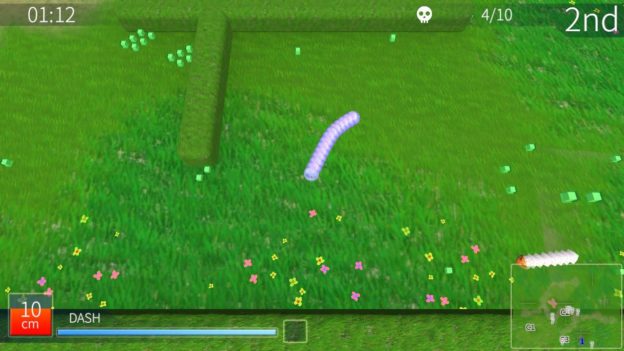 There’s no introduction, tutorial, or anything of the kind. Once the game is booted up, you’re thrown into the main menu where you can choose one of three modes to play. It took me about 30 minutes to play through all three modes once, which is an extremely short amount of time to play a whole game through. However, at the time of writing this review, the game is $5.00, which isn’t too bad for the amount of gameplay.

In each mode, you play as a caterpillar, moving him along with the Joy-Con’s analog stick. There’s a meter at the bottom of the screen. You can hold the R-button down to let your caterpillar move ever so slightly faster. It doesn’t make too much of a difference. Of course, once the meter runs out, you need to wait for it to fill back up again. That’s pretty much all there is to the controls. 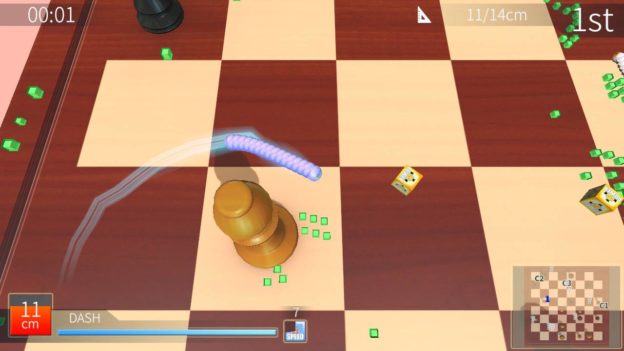 The first mode I played was Mission Mode. There are six stages in this mode, each with its own goal. In the first stage, you have to kill 10 other caterpillars. If your head hits another caterpillar, wall, or obstacle, then you die. You respawn right away and there are no consequences other than becoming small again. You can steadily grow by eating green dots or getting a “grow” power-up box which allows you to grow one centimeter. So, to kill other caterpillars, you need to move around, grow longer, and maneuver yourself and them so that their heads run into you. If you butt heads then you both die.

The second stage has diamonds scattered about and you need to pick up a certain amount. The third stage has a length goal where you need to grow to a certain amount of centimeters. The fourth, fifth, and sixth stages are the same as the first three, with one exception: instead of killing 10 caterpillars, you need to kill 25. So, despite there being six stages, there’s not much variety to them. 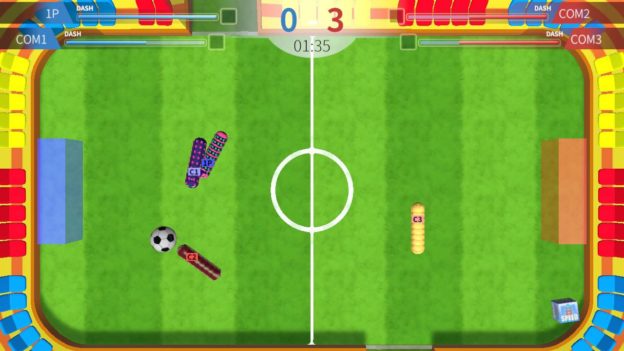 There are power-ups in the stage. You can get a grow box, speed box, or power box. The speed box provides a boost for a few seconds while the power box makes you semi-invincible for a short amount of time. 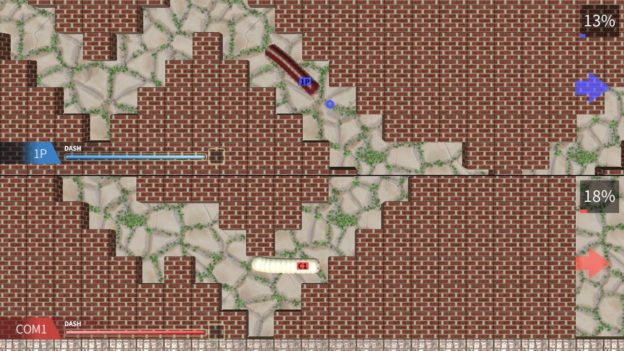 I played Mini Soccer Mode next, which didn’t last long at all. It was myself and a CPU versus two other CPUs. There’s nothing on the field to help your caterpillar grow and there were only speed power-ups once in a while. It’s strictly soccer. Except when you butt heads with another caterpillar, you both die. You immediately come back, but when you’re all going after the same ball, you’re going to hit each other … a lot. The game took about two minutes for me to play but it felt so much longer. Also, my team lost because my teammate kept scoring goals in our net.

The final mode is the Obstacle Course. Here you face off with a CPU going through a horizontal obstacle course. Obstacles included walls, other caterpillars, and that’s about it. It’s just a mode where you move your caterpillar along. You don’t die when you hit something head-on, you just get stuck for a few seconds, almost as if the walls were sticky.

Overall, Caterpillar Royale isn’t too bad of a game. I would like to see more variety in the modes, especially in the Mission Mode. I’d like to have more challenges and be able to customize the modes. For example, I should have to win a stage in Mission Mode in order to move on to the next stage. The controls are smooth and the graphics are crisp. Though it wasn’t as fun as I would have liked.

Caterpillar Royale is a super casual game. It’s easy to pick up and play, though for only a few minutes. The three modes are cool in theory but need more variety.