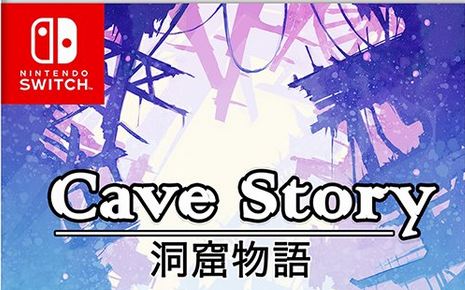 Let me get this out of the way – I really like this game. Maybe even love it. It’s fun, it’s easy to pick up and play. It’s got those retro-style graphics we all love (don’t we?). What appears to be just another retro platformer is actually something quite special, and I found it hard to stop playing long enough to write this review. I’d rather still be playing.

Cave Story has been around in various forms for a few years, but this is my first time with the game. The first and most obvious thing to appreciate is the presentation – those darned adorable retro graphics. Though simple at first glance, the subtle graphics present both a cute and stylish environment to explore. The simplicity is belied by the variety of scenes and characters with which you’ll be able to interact, from little computer screens and fireplaces, to giant eggs. 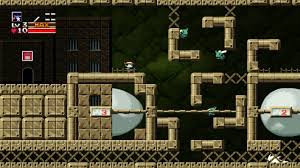 Those are giant eggs hidden behind the walls. And see that flame thing running along the bottom of the screen? Instant. Death.

Everything in this world is a little crazy, and a little backward. There are adorable bunny-like creatures with anger issues, robots who morph into other creatures, killer frogs, even weird wide-eyed statues that shoot orbs at you. There are many locations to explore, with everything from flowering gardens to creepy graveyards – I love that juxtaposition (and I’ve wanted to use that word in a review for a while now).

The story sees you embark on a quest in a world of bunny-like creatures called Mimiga. You begin by searching for one named Sue, who used to be human. You’ll run into all kinds of creatures, from witches and robots to bats and frogs .. most of whom are out to end your life. The story is fun and full of humor, and unfolds neatly as you progress, with new areas opening up and new characters introduced along the way – again, in a rather subtle way. Suddenly there’s a fireplace to enter, or you’ll find the key to a locked door. It’s so much fun exploring that it doesn’t feel like work – you’re just enjoying your romp through this retro and slightly kookie world. 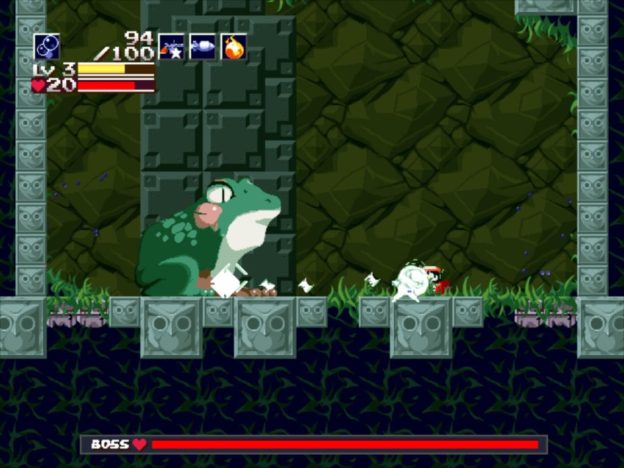 This isn’t a typical frog, but a giant boss frog. Still gotta shoot it, though. A lot.

The fantastic soundtrack is extremely catchy, and the sound effects are cute – somehow it sounds retro, but in a cool new way – like an old song that’s been remastered. The tunes change for each environment and maybe – just ever so slightly – border on being repetitive if you’re in one place too long. This is a very minor niggle since it mostly feels so natural. I don’t usually play games with the sound on for long, but I certainly made an exception for this one.

Like everything in this game, the gameplay is simple but has a surprising amount of depth to it. You’ll start without a weapon but soon acquire a gun, which you can level up. You’ll find more weapons along the way, like fireballs and missiles, and switching between them is as easy as pressing the L button on your Switch. You’ll also want to be on the lookout for hidden rooms containing extra hearts, a little like Link’s heart containers. Death will still occur frequently, but there are plenty of save points for instant reincarnation. 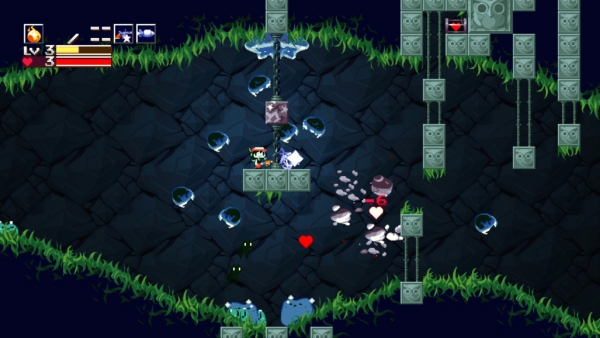 See the heart container in the top right? Tricky to get to, but not impossible. Oh and those things attacking me are jellyfish, another animal you’ll have to deal with.

And to that end (the end of your life), there are plenty of tricky platforming moments to navigate. But this is mostly a game of exploration, puzzle solving and .. well, shooting animals. It comes across as a mix of the old Commander Keen games with the Metal Slug series. There’s a lot of content to keep you busy too, with tough sections, various quests, time trials and multiple endings. Plus the promise of a new co-op mode in a future update!

Circling back to my initial decree, I really like this game. If you haven’t played Cave Story before, be sure to check this one out. Even if you have, replaying this portable version could only be a good thing. It’s a fun and challenging retro platformer that looks great – it comes very highly recommended.

Cave Story + is a retro platformer with everything going for it – fun story, great visuals and audio, upgradeable weapons, killer bunnies. Seriously, check this one out.