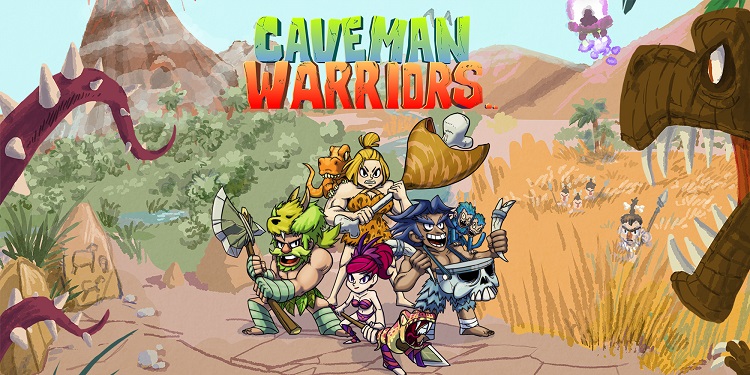 Caveman Warriors is a fun new multiplayer game for the Nintendo Switch. This whacky platformer takes you wayyy back, like to the very first days of civilization. The story begins with an alien descending upon two cave-babies – he snatches them up and takes off. This angers caveman dad, so he grabs a spear and goes hunting for baby! You and your friends can choose between four playable characters and fight your way through tons of relentless enemies and difficult bosses, to save the future of mankind.

What makes this game so fun is the ability to play with other people. You can fight side by side with up to four players and help each other reach the end of the level. Each of the four characters has a unique attack or special ability that you can use to your advantage. For example, one character has a spear that she can throw at faraway enemies or walls – this creates a platform to reach higher areas. Another character has the ability to charge through enemies and other breakable objects allowing a path to move forward. If you’re playing alone you can easily cycle between the characters at any time during a level. This gives you easy access to every ability without actually having to play as a specific character all the time, which is pretty cool. 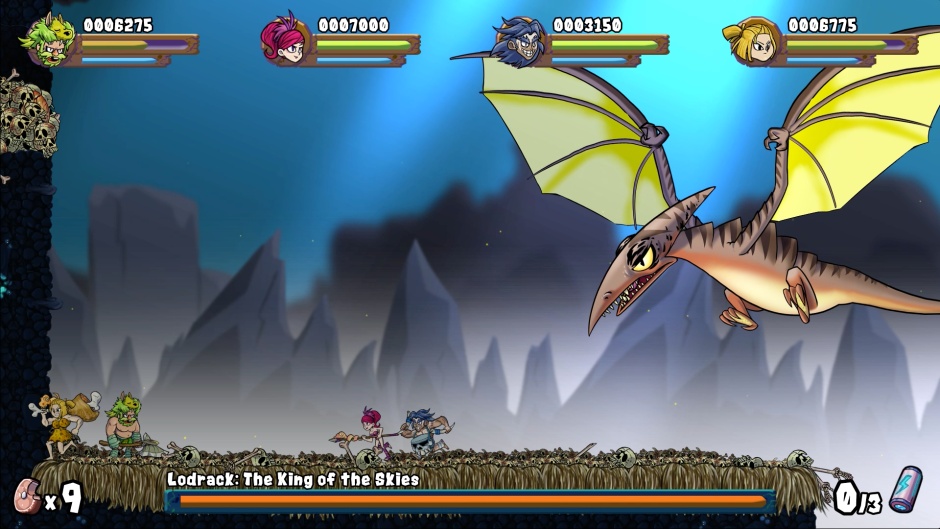 Caveman Warriors looks like a fun game. Even before I started playing it I thought it had a fun, cartoony feel. Almost like the Shantae series. There are some really neat looking creatures to spar with and the scenery and backgrounds are nice as well. The smooth, vibrant colors really make everything look great. I also didn’t notice any lag or framerate issues while playing, in TV or handheld mode. One of the most exciting levels I played had me racing dinosaurs while being chased by a gang of monsters (checkout the screenshot below). Another thing I liked about Caveman Warriors was the variety in boss fights. 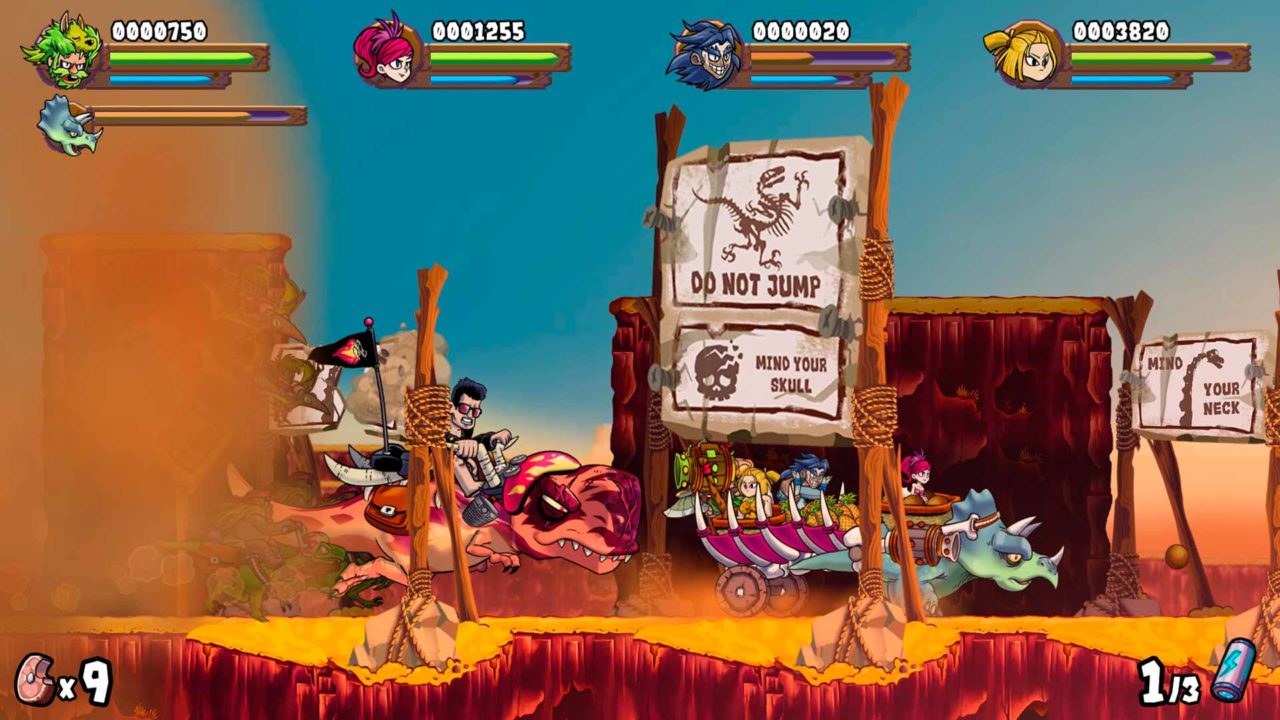 Speaking of bosses, there are some tough cookies in this game. Sometimes I feel like I wouldn’t have even been able to progress if it weren’t for my player two. When your health meter runs out you return to the nearest checkpoint. Checkpoints are a little sparse for the length of each level but I’m glad they’re there. I wouldn’t say the enemies are difficult but they persistently attack when you’re in range and there isn’t a block button, so yeah. They also knock you back quit a bit if they hit you so this can cause you to fall off of a ledge or go flying into another enemy.  It can get a little frustrating when there’s a lot going on but then again, that’s what the developers were going for. 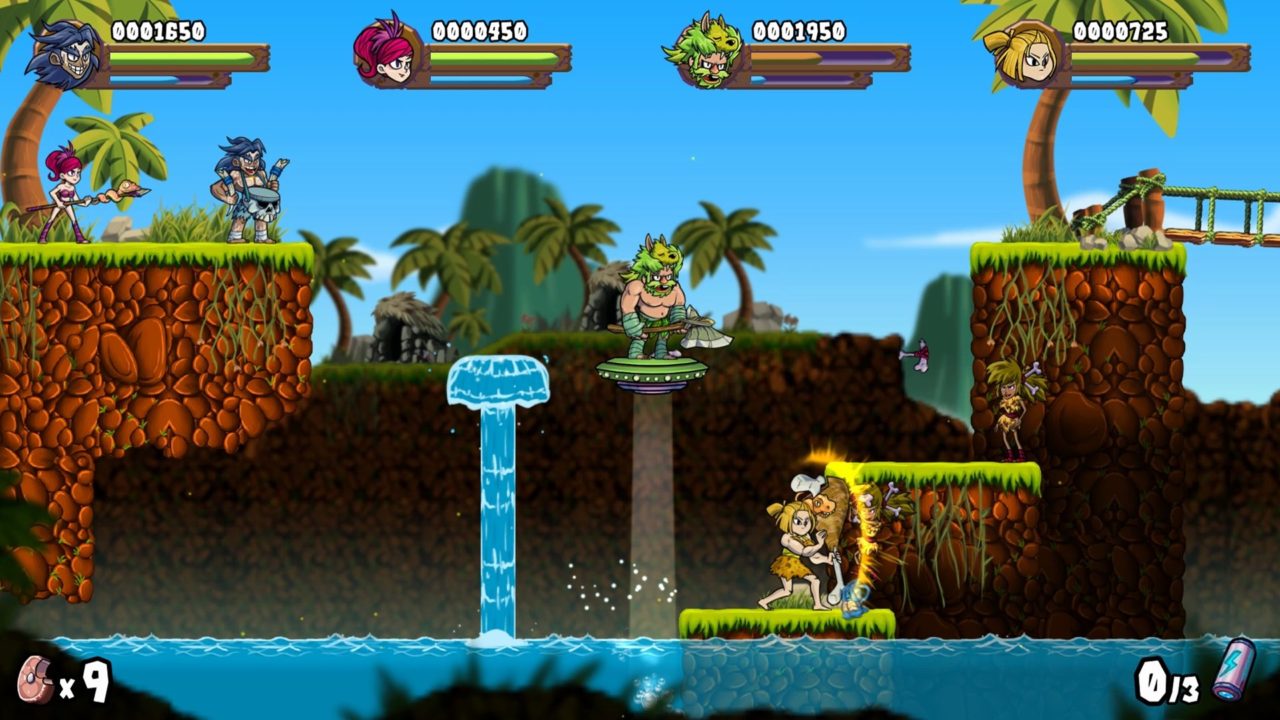 Overall Caveman Warriors is a pretty cool little game. It’s short in length but the difficulty makes it a fun, challenging experience. It can be a little annoying sometimes when it comes to enemies and where checkpoints are placed, but it’s definitely worth checking out if you’re into these types of games. Especially if you’re looking for something to play locally with friends or family. Check out Caveman Warriors, available now on the Nintendo Switch eShop for $12.99.

Caveman Warriors feels like a polished, retro arcade platformer. I like the way it looks and how simple the controls are. The gameplay can be a bit frustrating at times but being able to play with other people makes the experience a lot more enjoyable.