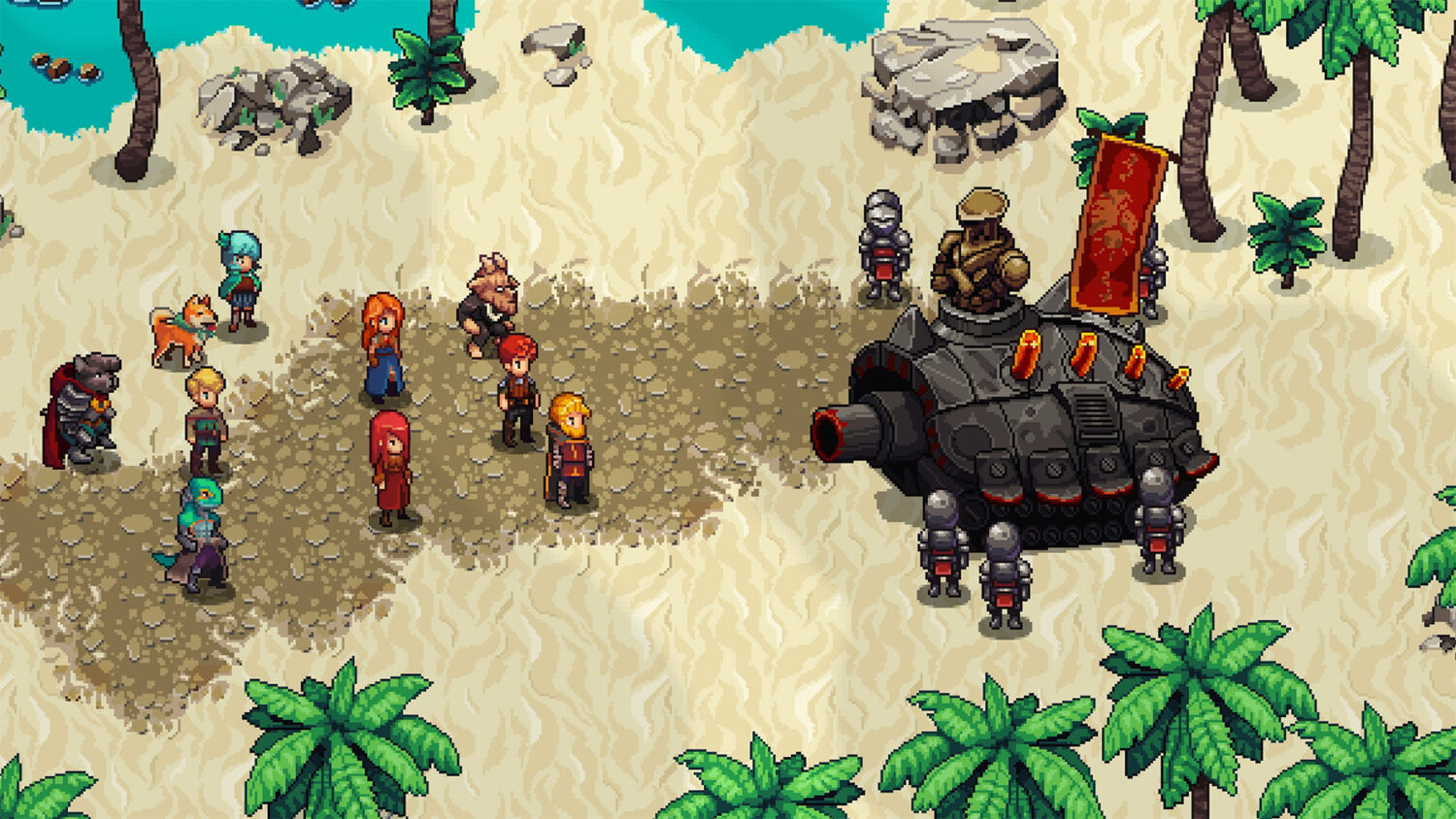 Have sword (or magic (or mech)), will travel.

By now, you’ve likely heard the accolades for Matthias Linda’s throwback JRPG, Chained Echoes. Believe every word of it. This is a fantastic game that succeeds at everything it sets out to accomplish.

Chained Echoes is obviously inspired by many classics of the genre, but naming them here would do this game a disservice because it never feels like a simple homage. In many cases, it’s actually better.

The game starts with a bang…literally. Players are thrust into a battle on the warring continent of Valandis, but the early heroes aren’t exactly eager participants. One inadvertently unleashes a devastating weapon on the battlefield, its power so great that it quickly brings the war to an end. But the ensuing peace is only a veil for those who’d like to harness the power of the weapon to actually win the war, not abandon it. 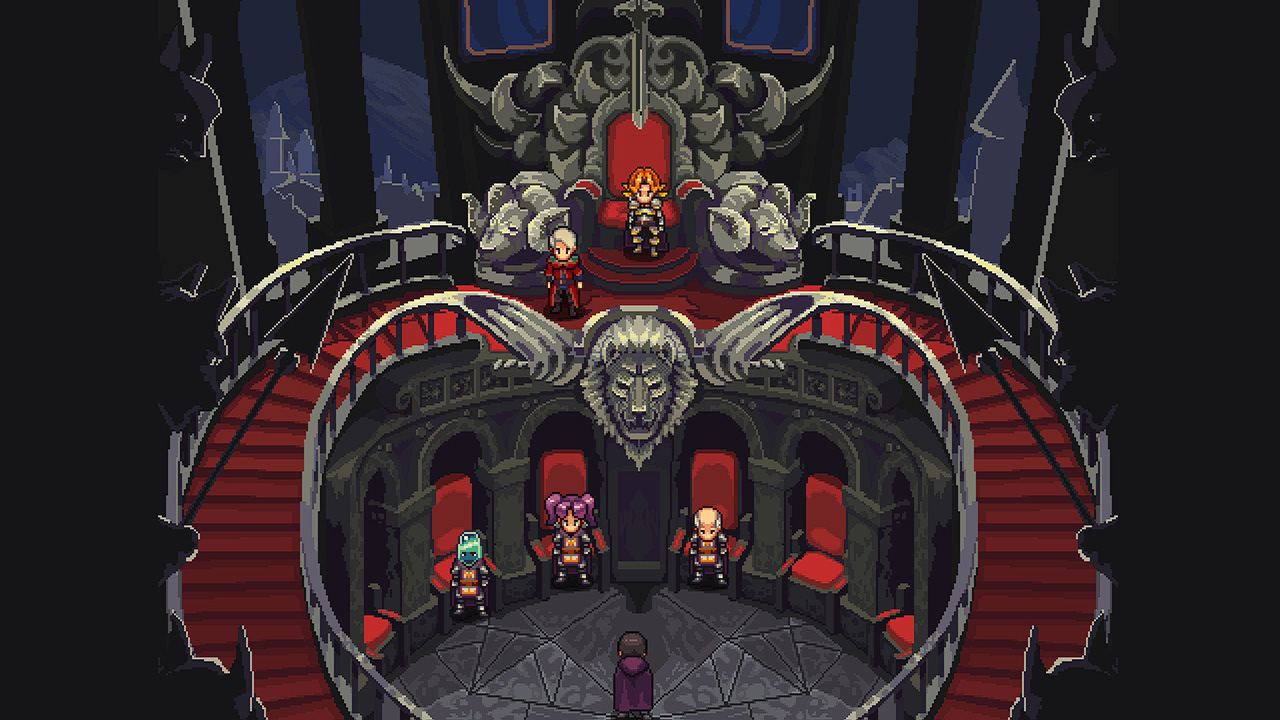 Of course, this means you’ll soon be controlling a party that includes participants from both sides, as well as your typical outside observers. Don’t think you’ll understand how things will go, however, as Chained Echoes consistently changes up the party size (from 1 to 8) and participants to keep things feeling fresh. It seems like most major decisions with the game are based around the narrative, and that means we get a JRPG that excels in storytelling—an element that’s unfortunately been lost as of late. Side quests feel important to the tale, not just tacked on. There’s little to no grinding to be done, so the adventure never really slows down. And if you get off the beaten path to do some exploring, the game will push you back on it when necessary. In other words, you won’t waste any time wandering about areas you’re not supposed to reach yet.

Everything in Chained Echoes serves the pacing, right down to the ability to save your game wherever you are; you’re not forced to backtrack or race forward when you need to stop playing. And when you do backtrack, you don’t have to fight the same monsters over and over again unless you save in the middle of an area. In this case, you’re often returned to its entry point with monsters back in play. But the areas of the larger world are presented in smaller grids that make them easy to work through. 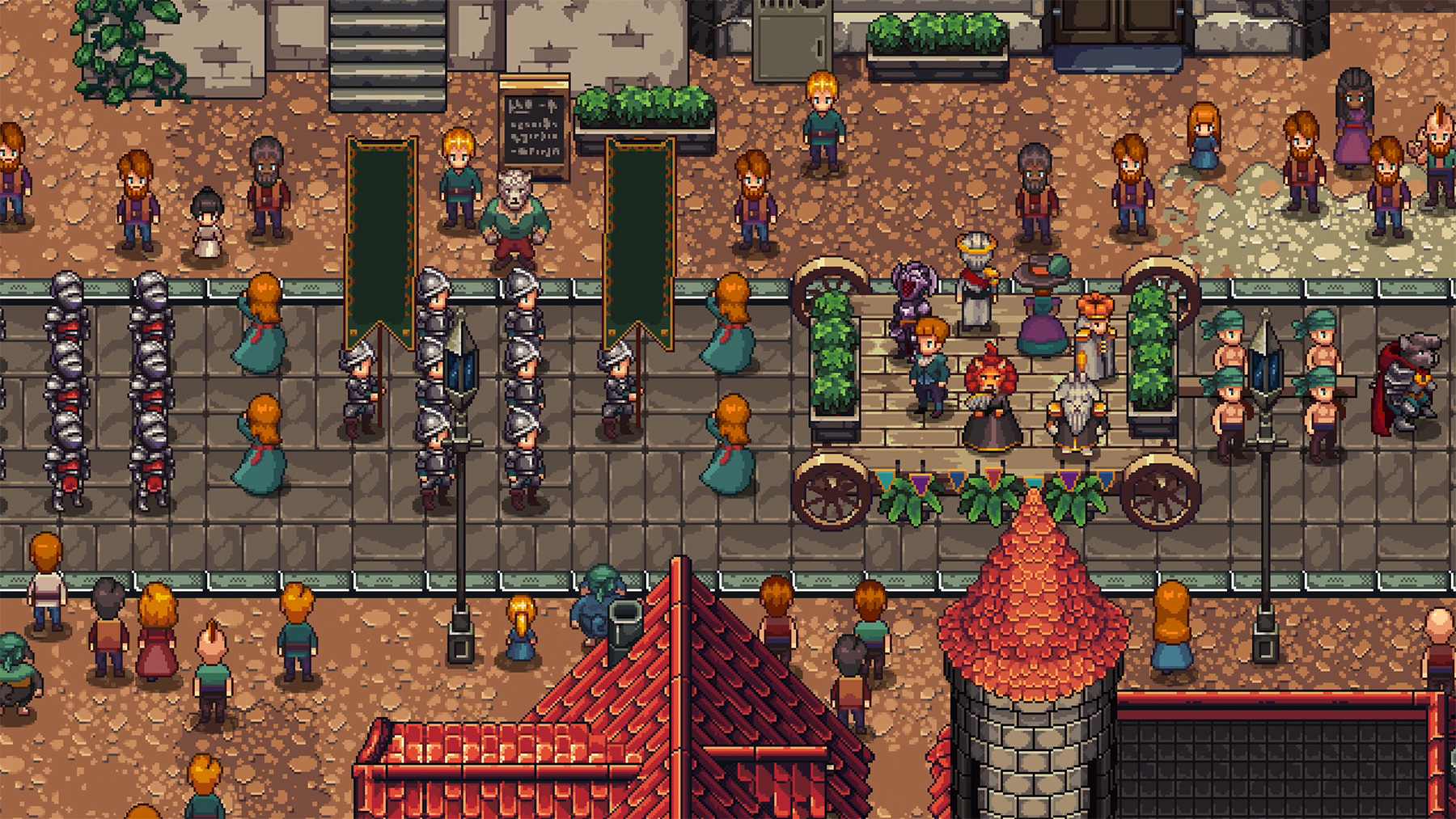 The paths through these areas are mostly linear, although quick detours will often lead to some treasure. That’s important, because Chained Echoes’ robust upgrade system is served by the materials you find. Loot can only be sold, but selling certain items unlocks “deals” that provide key elements for upgrades. Both armor and weapons can be upgraded with slots in which you insert materials to enhance capabilities (stronger attacks against certain enemy types, enhanced capabilities with elemental attacks, increased health, etc.). These enhancements can be made only at foundries, so prepping your team for the battles ahead becomes quite important. It’s also somewhat nerve wracking, as you don’t want to waste the elements you’ve acquired. Plus, you’ll occasionally optimize a weapon only to get a better one within minutes. You can remove your enhancements, but you’re limited in how often you can combine them for best effect.

Not all upgrades are tied to loot, however. The characters themselves get skill points they can assign, with more becoming unlocked as you progress. This allows you to use your party members as you like, but it will also dictate combat flow. Should you enhance magical attacks or increase defense? Is it worth it to strengthen defense against a troublesome enemy type when only a few battles involve that enemy? I especially liked creating combos amongst party members. For example, I gave one character an attack that paralyzes enemies and another the ability to cause 3X damage to paralyzed enemies. There are many options like this, and once you think you’ve finally got things figured out, the game introduces mechs to start you all over again. 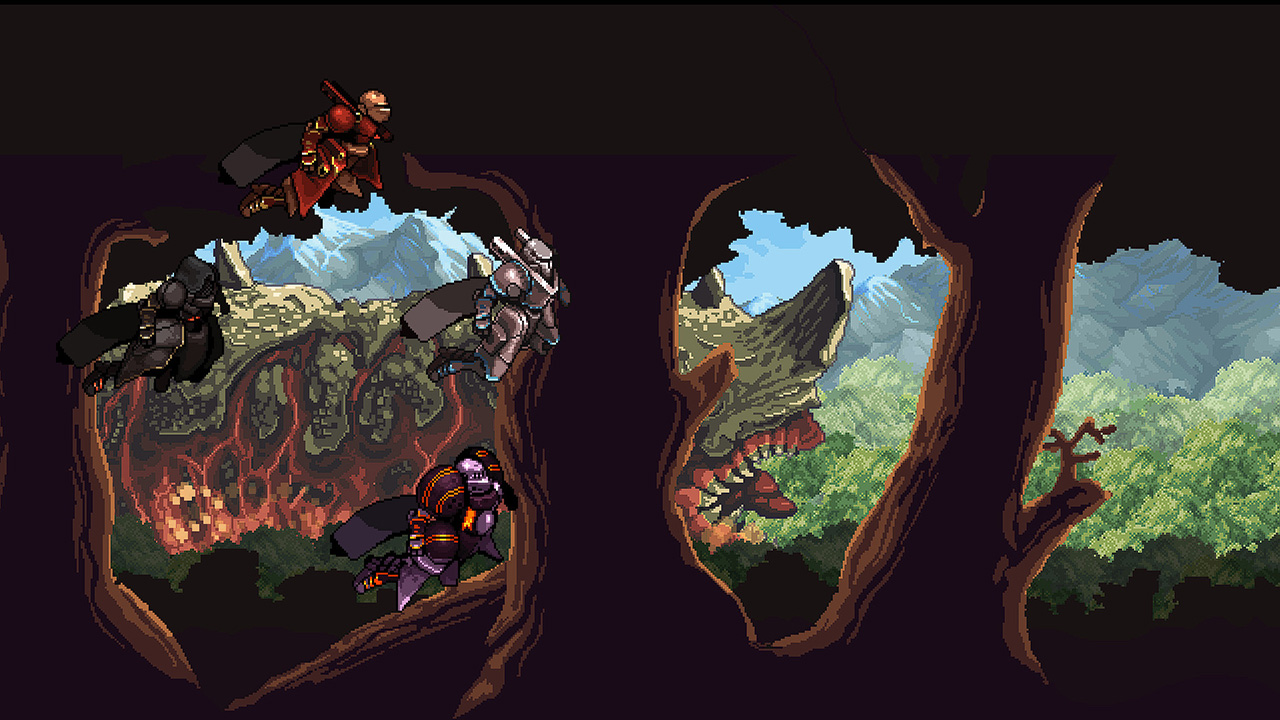 No matter how you prepare for the battles, they’re quite exciting. This is largely due to the overdrive system. Each move increases or decreases the overdrive meter that affects your battle strength. You’ll start in yellow, where things are pretty standard. Work your way up into green and your attacks will do more damage. Push too far into the red and both your attacks and defense will suffer. Each attack raises the meter, but there are certain moves you can make that will lower it again. The need to keep the meter in the green forces you to swap in characters who have the ability to raise and lower it as necessary, meaning you can’t just use the same characters’ attacks over and over again. Even better, some bosses play with the meter, making it much more difficult to stay in the green (or removing it entirely). It’s a great system that keeps the battles exciting while forcing you to use everyone. It even affects their skillset, as you may find yourself choosing skills specifically to help each character control the meter. 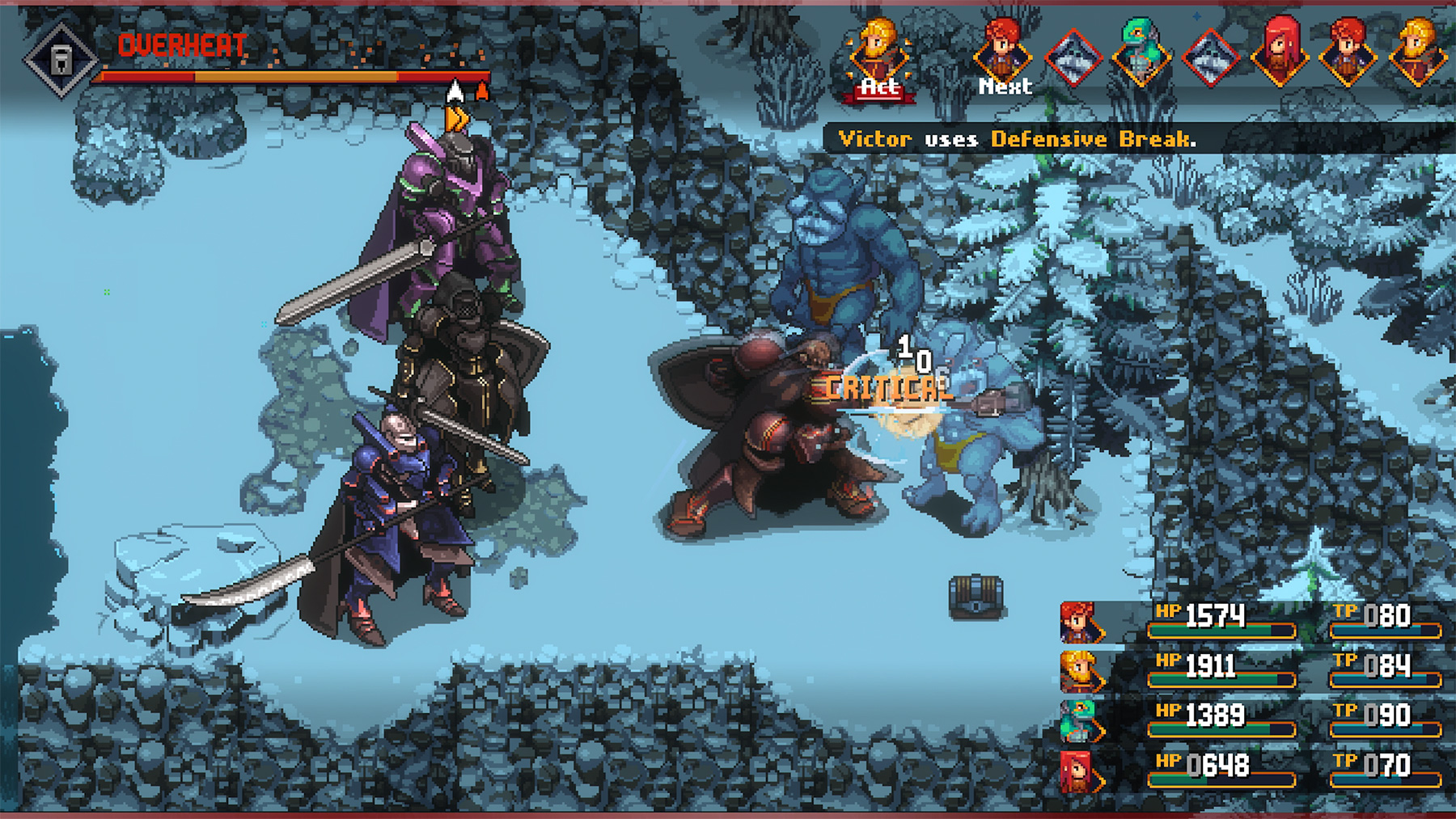 It’s a lot to consider, yet even the most challenging battles are manageable. I only lost all party members a few times throughout, at which point you’re given the option to load your last save or try again. If you take the latter, you’re first allowed to adjust your party setup to see if that’ll help. It’s also worth noting that because you can see enemies on the map, you can avoid most fights (some have to be won to progress). And once you’re in a fight, you can escape most of them if things aren’t going well. This isn’t left to chance, either; if you flee, you flee, and you’re not punished for doing so.

My minor issues with Chained Echoes were mostly exploration related. Although the world’s visuals are wonderfully detailed and colored, boundaries are hard to detect; I spent too much time pushing against invisible walls to see if any had a place to squeeze through. The easily accessible maps show most traversable areas, but some require a lot of back-and-forth to access them. One area required the activation of pathways you often couldn’t see, resulting in a lot of backtracking just to see what had opened. Also, since the weapon/armor and skill upgrade screens don’t show the characters’ stats, you’ll have to keep reverting the UI to see who needs what the most. But that’s all nitpicking, and the rest of the game moves at such a rapid pace that it’s easy to overlook a few hiccups.

Chained Echoes is the last game I completed in 2022, and it was an amazing way to close out the year. If you haven’t played it yet, it’ll be a great way to start 2023.

Don’t look at Chained Echoes as a throwback to the 16-bit JRPGs of yesteryear, just look at it as an amazing game with an engaging battle system and wonderfully paced story. You can also look at it as one of the best Nintendo Switch games of 2022.