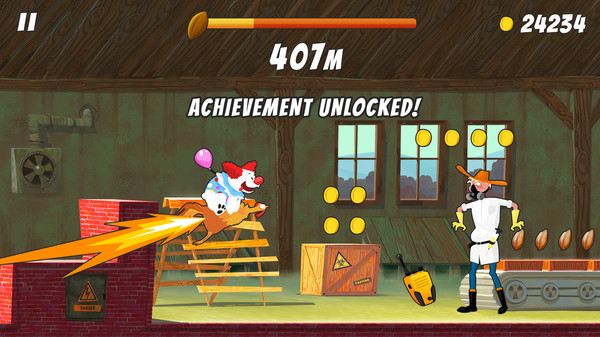 A passing glance at Chicken Rider will tell you basically all you need to know about it. It is bright and colourful, with a bizarre premise that only gets weirder as you play more of the game.

You are a baby polar bear who has escaped from captivity. On your bid for freedom, you also liberate a number of chickens who are also imprisoned. You leap onto the back of a chicken and it is your mission simply to flee.

Chicken Rider is an endless runner game, so the gameplay is easy enough to understand and the controls are very simple. The chicken runs on its own and all you need to do is jump to avoid crashing into anything or get caught by guards along the way. 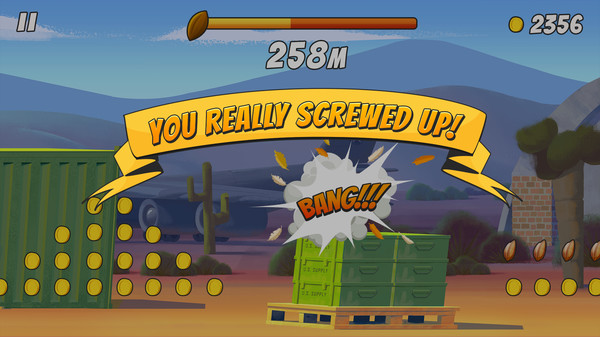 As you run, you collect coins. At the end of each run, you can use your coins to buy power-ups that will give you a boost on your next attempt. You earn extra coins for completing any of three achievements per run, which are replaced by new ones that are randomly generated each time you get one. This might be jumping over a specific number of enemies or reaching a certain distance on your run. They’re rarely the kind of goals that you’d have to go out of your way to work into your run.

On your escape, you can also pick up items that give you a temporary boost. These are just as eclectic at everything else that goes into this game. You can ride a skateboard that makes you go faster as well as giving you the power to blast through the obstacles that would usually end your run. You can drink hot sauce that lets you fly for brief periods of time. You can set off a lawnmower that smashes through all the enemies in your way. 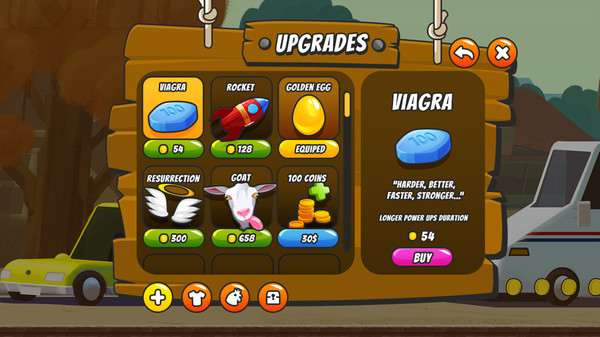 The sound effects feel like they have been specifically designed to annoy the parents of any children playing the game. Every power-up you collect has a unique noise and, whenever you jump, one of the fleeing animals cheers.

It is difficult not to like Chicken Rider. It’s certainly got a lot of strangeness to it, but it’s silly and playful in a way that is wonderfully childlike. It doesn’t have a terribly profound story and the gameplay itself doesn’t present the kind of challenge that will engage you for a huge amount of time. But it’s definitely enjoyable, especially for a game that costs next to nothing.

When it comes to just switching off and delighting in something simple and goofy, Chicken Rider has you covered.

There isn’t a lot of substance to Chicken Rider, but its bright colours and silly sounds make it enjoyable enough.