It’s the feel-good game of the year, as a chicken and worm put aside differences inherent with their species to work towards a common rescue goal. Atooi’s Chicken Wiggle brings both great platforming and game design tools to the 3DS eShop. It’s hatched a winner. 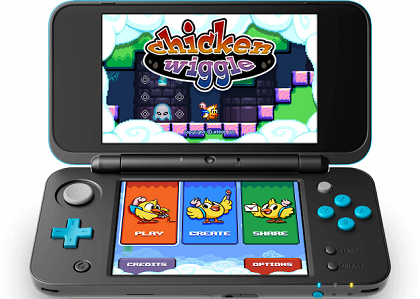 The core game features nearly 50 levels. Spread across eight towers, it does a very good job at introducing new elements, mechanics, and power-ups. It’s quite intuitive, and successfully nails down pacing. The challenge ramps appropriately, which isn’t to say that this game is very difficult. However, after Mutant Mudds Super Challenge, I’m certainly not complaining. You’ll still find yourself being lulled into a rhythm where you move so quickly you become careless. Timing is key for specific hit detection with the enemies. The option to turn checkpoints on or off is a welcome feature, one that will definitely up the challenge. Trying to 100% each level is no small task either, especially in the second half. 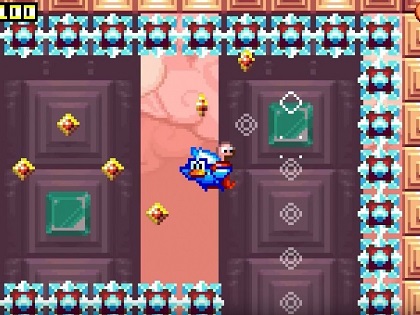 The levels are fun… quite fun actually. Whether jumping from vanishing cloud platforms, dodging spiked pillars that pop from pipes, or even moving through gelatin, the variety of familiar and fresh keeps everything enjoyable. Using the worm as a grapple is addictive, and it doesn’t get old. But I do wish there were some small cut scenes or something to introduce each new tower, making the game feel more like an adventure.  Some bosses would’ve been a nice touch as well. There’s really just one uninteresting (albeit tricky) boss that you meet at the end in a novel manner. Perhaps Chicken Wiggle 2 will improve on these? 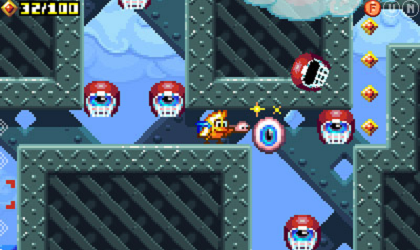 Chicken Wiggle offers a pixel art presentation that’s bright and vivid. The stereoscopic 3D is used rather effectively to give the game a cool look, and some of the effects and obstacles really play to its strengths. Complementing these is the soundtrack, which fits the fun tone the graphics augment. There are some pretty catchy compositions here, a couple that might very well get stuck in your head. An aesthetically charming package overall – good stuff! 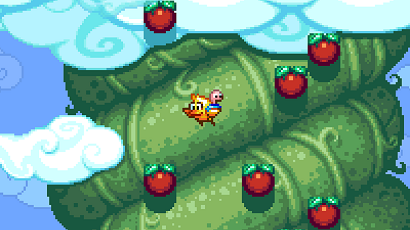 Let’s talk level creation, which is a sizable part of Chicken Wiggle. I’ll admit the tools looked a bit overwhelming at first, but within just a few minutes I was on my way toward creating my first, admittedly easy, level. Unlike the 3DS version of Super Mario Maker, you can actually share your creations here! User designs are limited to early access press at the time of this publication, but should soon widen out. I really like how you can alter the objective beyond rescuing friends – collecting all loot or eliminating every enemy just to name a couple. Leaving small hints is another good feature.  I just wish a couple of the functions were more readily apparent. Not the creative type? There’s a number of Atooi designed levels already, with more free ones on the way. 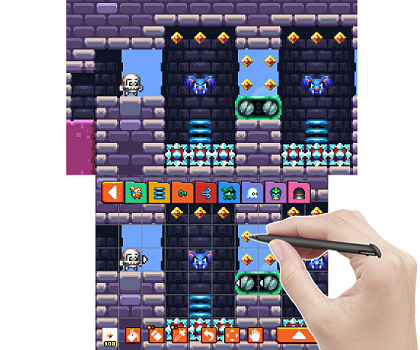 At $14.99, this game probably isn’t an impulse eShop buy. If your interest in designing levels is minimal, I’d wait for a sale. If you are a creative type, this is an especially entertaining, polished, and well-rounded title. Hopefully, Chicken Wiggle will get the attention that it deserves.

Speaking of levels, here are just a couple of my own creations. Level Name – Pure Nintendo – Level ID – 268. Level Name – Timing is KEY – Level ID – 298. Having beaten the game 100%, I’m really looking forward to playing some new levels soon. Share away, everybody.

If you are a creative type, this is an especially entertaining, polished, and well-rounded title.