Construction Simulator 2 on Nintendo Switch occupies yet another niche in the simulation genre. In this game, you will get a reality check as you experience the life of a constructor. Despite the game’s slim target audience, it still provides a satisfying experience, especially for a mobile ported title.

Construction Simulator 2 has you tasked with building your own construction company from the ground up, meanwhilst you take the wheel of 40 licensed construction vehicles. If that hasn’t piqued your interest, then don’t read on… this game isn’t going to change your mind about simulation games or construction. That isn’t to say this game is bad by any means, it’s just made with a particular audience in mind – hence the fact, I’m reviewing it as both an enthusiast of the simulation genre and with experience in construction writing. 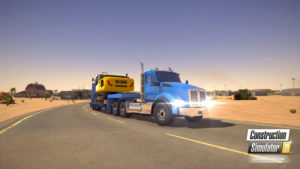 Unlike a handful of simulation games available on Nintendo Switch, this game is more centered on an open-world principle. There is an in-game map with several regions, each of which is decently sized. Those regions are also one of the many incentives to keep completing construction jobs. You won’t unlock all the regions at the beginning of the game; they are unlocked as you progress through the game. Each in-game region also has its own construction company headquarters, and you can purchase various upgrades for these offices.

If upgrading your headquarters and driving around diverse locales isn’t enough for you, then you can always task yourself with one of the many construction jobs in the game. There are over 60 construction jobs in-game. Despite how little that might seem, it really is a lot. Each construction job is rather lengthy, with some taking me more than an hour to complete. Building for over an hour might sound tedious, but I promise it’s much more amusing than it sounds. With such a wide variety of different vehicle & machine types and a sense of reward for every task you complete during a job, it is really hard to complain about the lengthiness. In fact, it is probably one of the game’s many strengths. Construction jobs range from rebuilding railroad bridges to minor gardening work, to repairing roads, to building residences, and that’s only scratching the surface of what can be built. 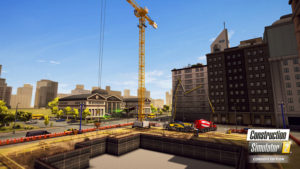 It wouldn’t be a simulation game, though, if it didn’t include some of the realistic elements of life; such as a day/night cycle and traffic crimes. Surprisingly, both of these elements are present in the game. This extra spice of realism added a lot more to my enjoyment with the game than I would’ve expected. Being able to collide with cars and run red lights in-game was really entertaining, even if it did deduct from my company’s bank account. But don’t worry, you can always go to the bank and get a loan for your corporation – it’s right across the street from the dealership. In regards to the day/night cycle, yes, it will impact how you build, albeit for the better. Building during the dead hours of the night is a difficult task for anyone and that still shows in-game, but the developers made some accommodations to help make this pain feel cogent. Each vehicle has a toggle for both headlights and rotating lights if you find yourself struggling during the night.

If all of this cement-y goodness doesn’t satisfy you, well, then maybe the completionist opportunities in-game will. You can level up your builder, which in turn will grant you skill points to upgrade various characteristics. Additionally, if you need to earn some extra cash but aren’t in the mood for tackling a job, you can complete some challenges. This game really is a builder’s paradise – and a steal for just $20! 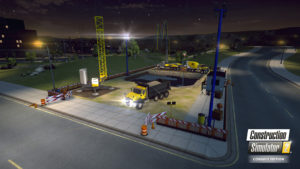 All of that being said, there was one major grievance that stood out during my playtime and that was the camera controls.

The game does a great job of teaching you the ins and outs of managing a construction company and operating various vehicles and machines; there’s even an expansive tutorial section in-game. That said, I found myself messing around with the camera more than I would’ve liked. The issue was partially resolved when playing in handheld mode, as the touch screen controls allow for easier camera manipulation. Nonetheless, the game would’ve been more enjoyable if the issue wasn’t present.