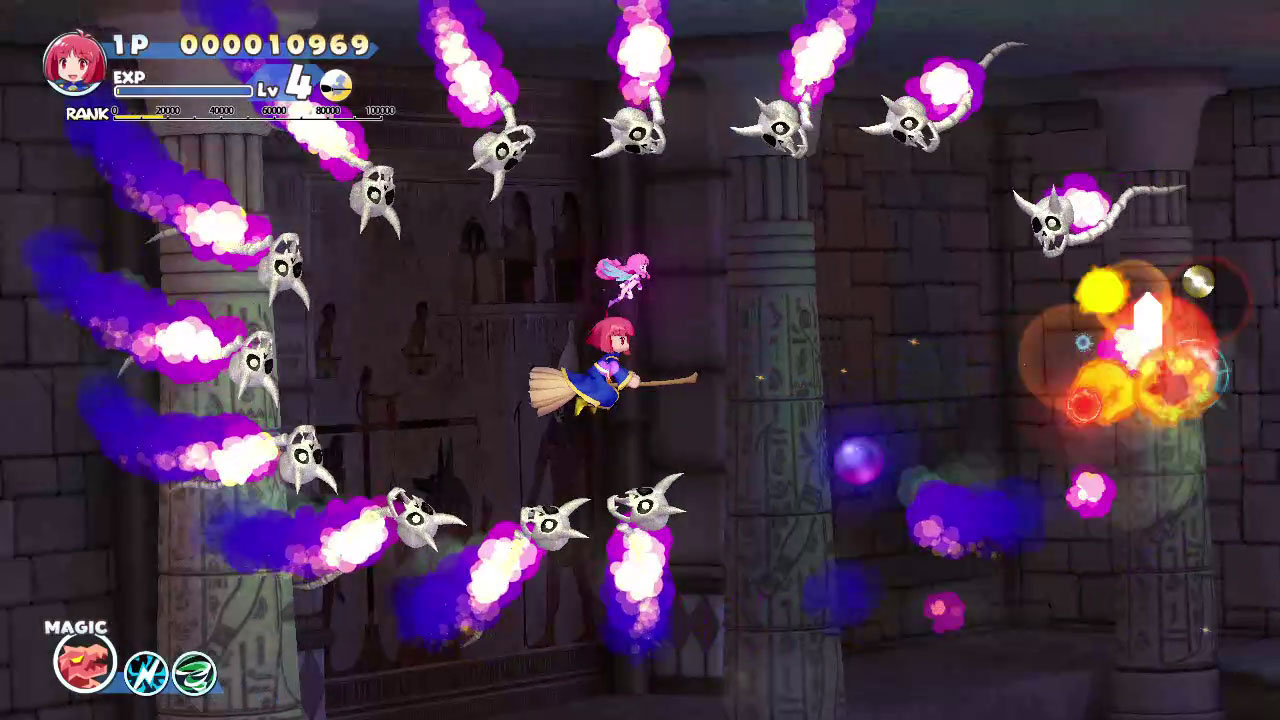 Cotton is back and she’s on a mission.

I always thought a Willow was a kind of tree—and one from which you don’t want a “switch.”) In Cotton Fantasy: Superlative Night Dreams, a Willow seems to be a sort of candy which our hero, Cotton, craves. The limited story of this game sees a critical shortage of Willows, and Cotton has been recruited to find out where they went and to see if she can bring them back to Fairy Land.

That’s not a lot to go on, but it’s quite alright because this game is really a shmup with an elevated “cute” factor. If you’re new to the genre, “shmup” is shorthand for shoot-‘em-up; a game where you basically press the fire button, hold it down, and shoot everything in sight. The other primary skill you will need is the ability to dodge a lot of enemy fire. 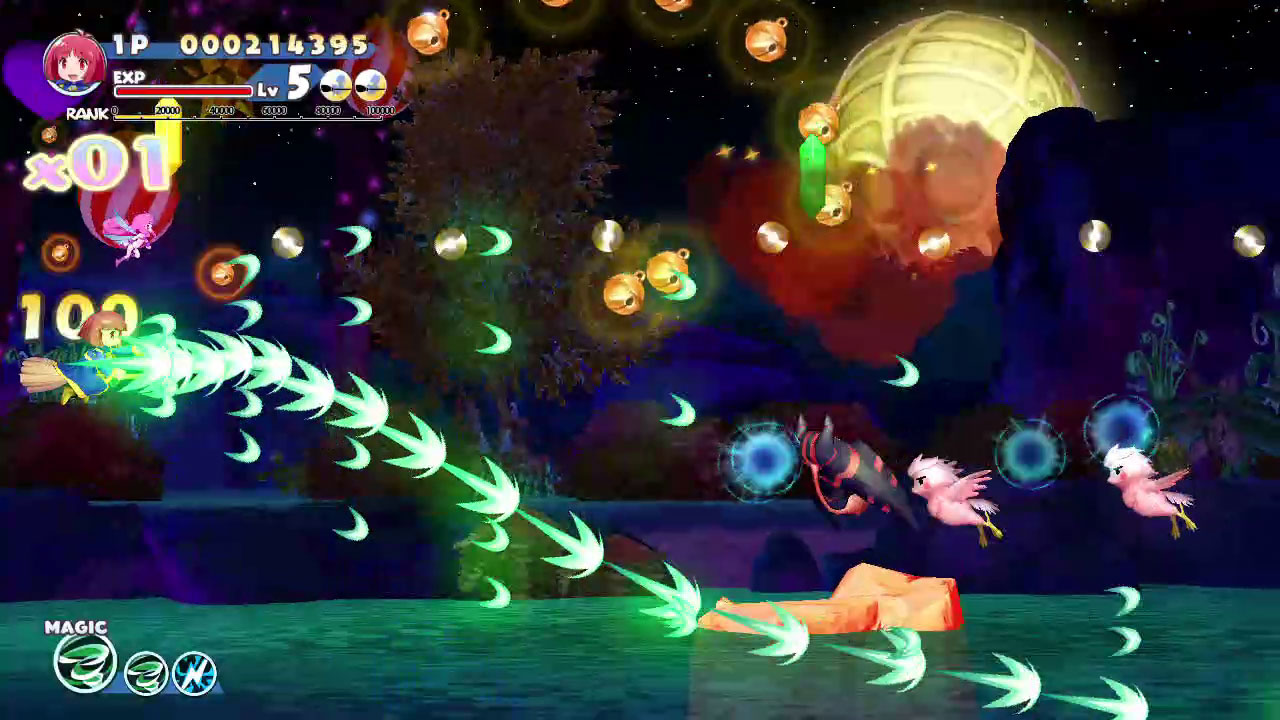 Don’t worry, you have a couple lives before you have to decide whether to start over or to continue from your current location with your score resetting to zero.

Let’s back up a bit. So, we mentioned this is a shmup with a limited story, and we’re OK with that. What else is going on with this game? As mentioned, our hero is a young girl named Cotton. There are five other heroes you can play from the start: Appli, Kawase, Ria, Fine, and Luffee. Each of these ladies has a different style of attack. The game includes a story mode in which you play through a series of levels complete with dialogue with a handy set of English subtitles. The game is part of a series of Cotton games developed for the Japan arcade scene, so, not surprisingly, the spoken portion is all in Japanese. No matter which hero you choose to play, all of the story elements are told from the perspective of Cotton. This is due, in part, to Cotton’s obsession with Willows (and eating them), but it may just be easier to write only one storyline and get on with playing the game. I’m fine with that. 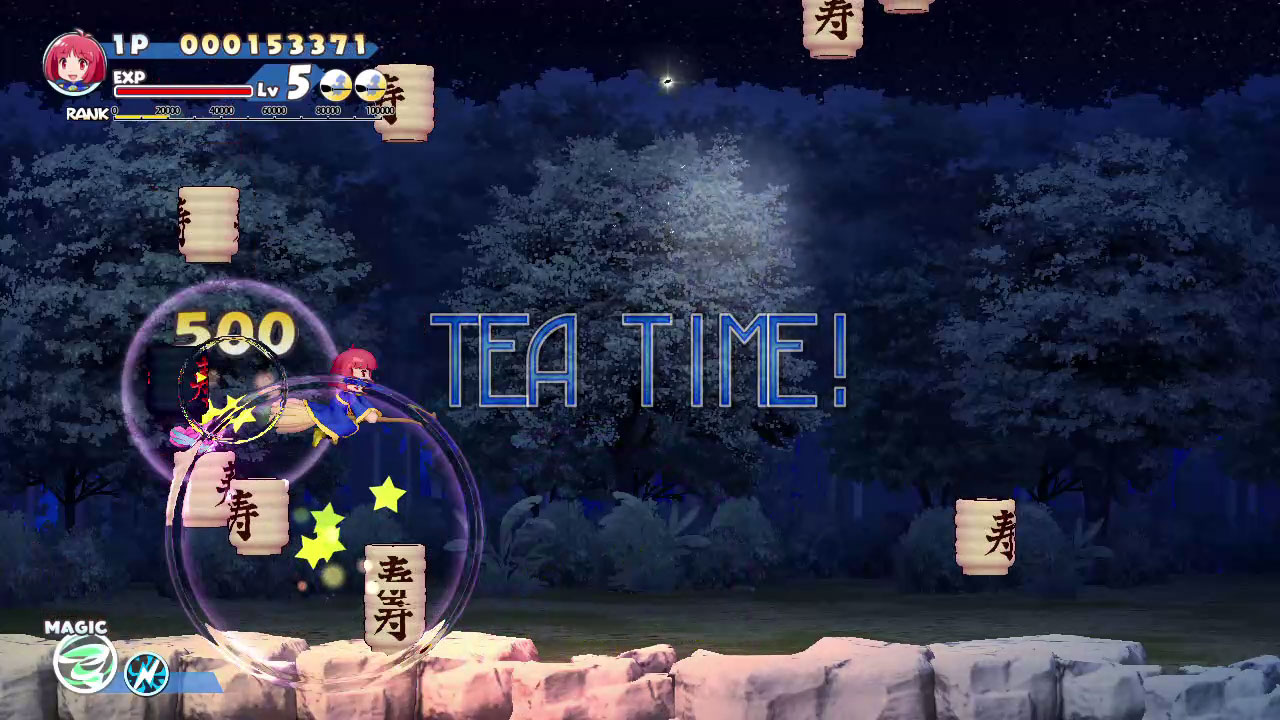 The type of weapon isn’t the only difference among our heroes. One of them will use time instead of lives for success in a level. We are all used to having a limited number of lives, but this game offers a hero who doesn’t “die.” Rather, she gets time taken off the total countdown. Don’t worry too much; she can collect icons to add a few seconds to the count, but taking damage from enemy fire knocks time off the countdown. So, you still need to be careful. Speaking of collecting things, there are crystals you can catch which can change the type of fire (straight shot vs. tracking shot, etc.), or help you level up. As with the shmups I have played before, leveling up is something you want to do as quickly as possible to get the vastly improved firepower. 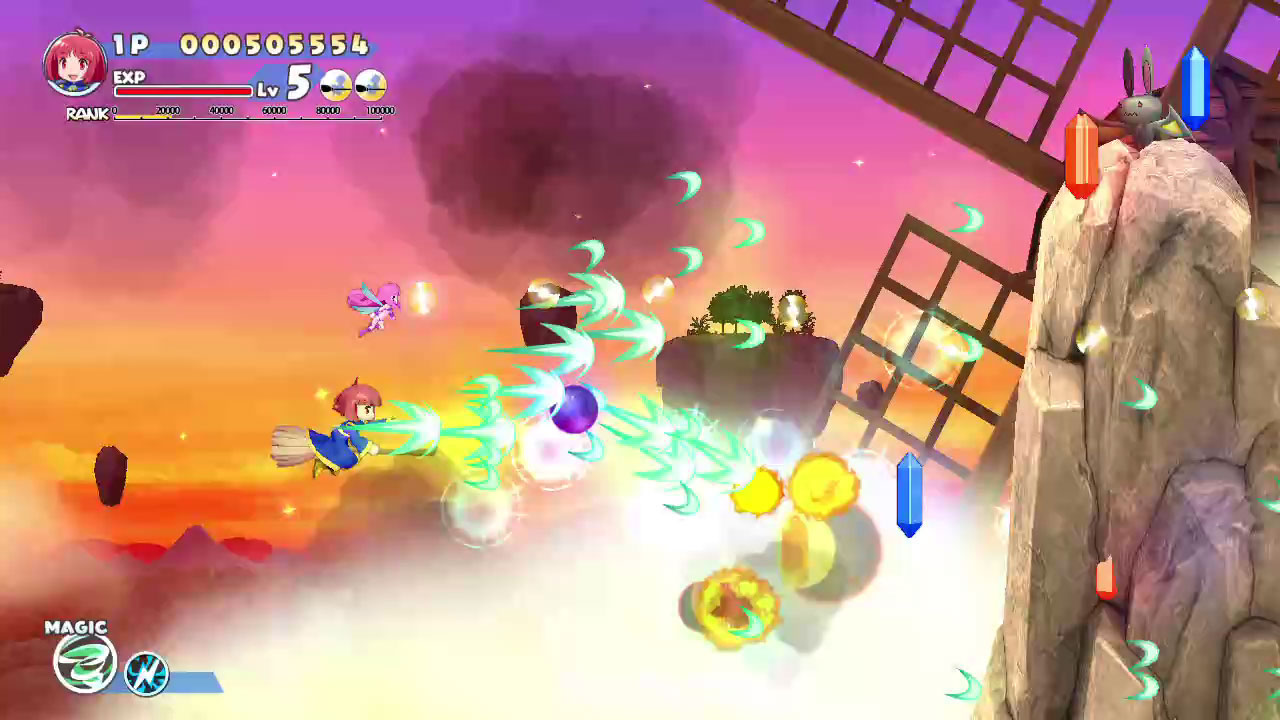 There are not a lot of levels to this game, so, to get from start to final battle may not take that long. Cotton Fantasy is less about actually completing the adventure as it is about getting through each level without having to restart your point count in an effort to get a high score. At the end of each level, you have the option of posting your results to a leader board.

I did not do this, it would be embarrassing.

Having multiple character options adds a little replay value, but the real draw is getting the patterns down and completing the levels successfully. This is easier said than done. There are multiple difficulty levels which do make things tough very fast, but there is one other factor working against you: the visuals. This game is well rendered—very vibrant with interesting backgrounds and obstacles and enemies and enemy fire. In short, it takes a fair bit of concentration to keep your position firmly in sight with all the rest of the goings-on. Speaking of obstacles, since the game operates as a side-scroller, you have to be careful to not get stuck by an obstacle; if the game scrolls on without you in the frame, you lose a life.

How does Cotton Fantasy: Superlative Night Dreams stack up against other games in this crowded genre? If you like a shmup for the joy of blowing things up, this one serves up a bit of what you want: lots of bullets, level-ups to lots more bullets, bombs, baddies, and bosses. The bosses are varied—sometimes a single big baddie, sometimes more than one entity, sometimes just horribly difficult. 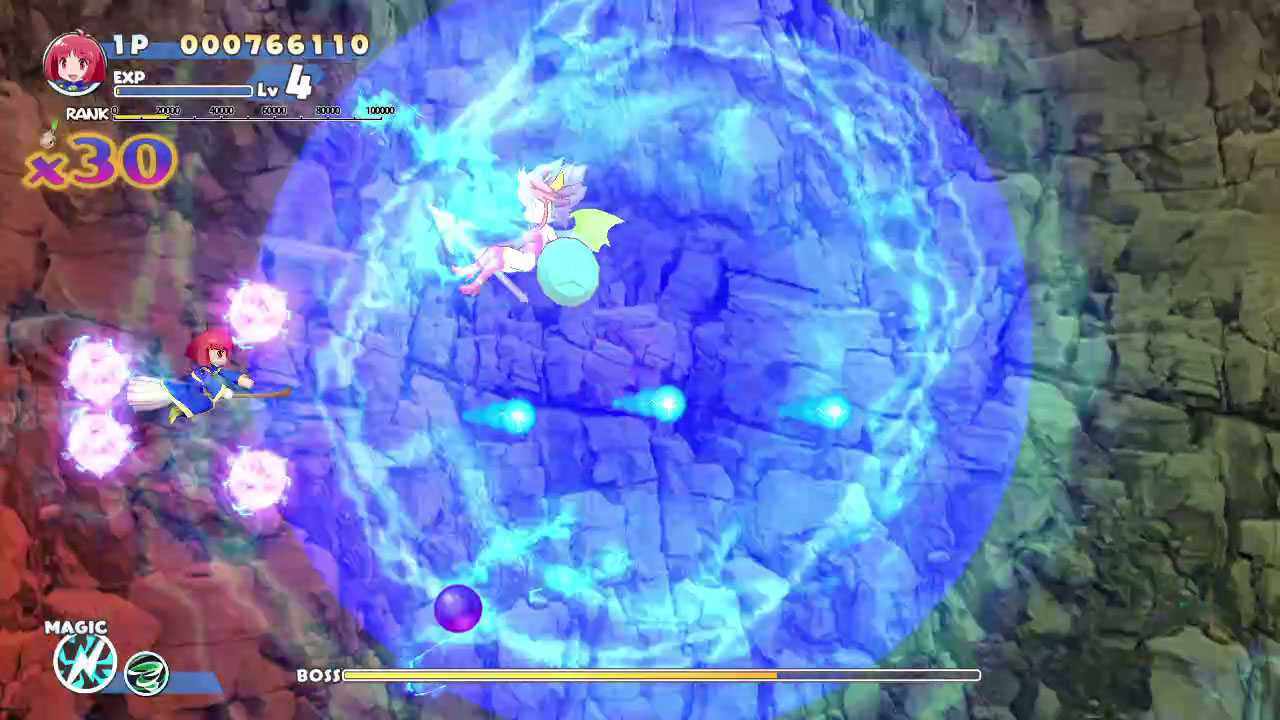 There is plenty of play time if you want to grind your way to the heights of the leaderboard, but there is little in the way of story as the game is more about patterns and reaction time. In authentic anime style, a fair portion of the voice work is, to a western ear, rather strident. But if you are accustomed to this style, or at least know what to expect, it can be taken as part of the package.

Cotton Fantasy looks nice and has some interesting baddies. It’s simple to play, but not easy to master. In the grand scheme of things, it’s just another shmup—good but not extraordinary.

Cotton Fantasy: Superlative Night Dreams is a bit pricey for the time it takes to get to the end. However, it’s a shoot-em-up. It’s not about getting through a story, it’s about shooting baddies and getting a high score. Fans of shmups (and of the recently revitalized Cotton in particular) will have some fun with this one.