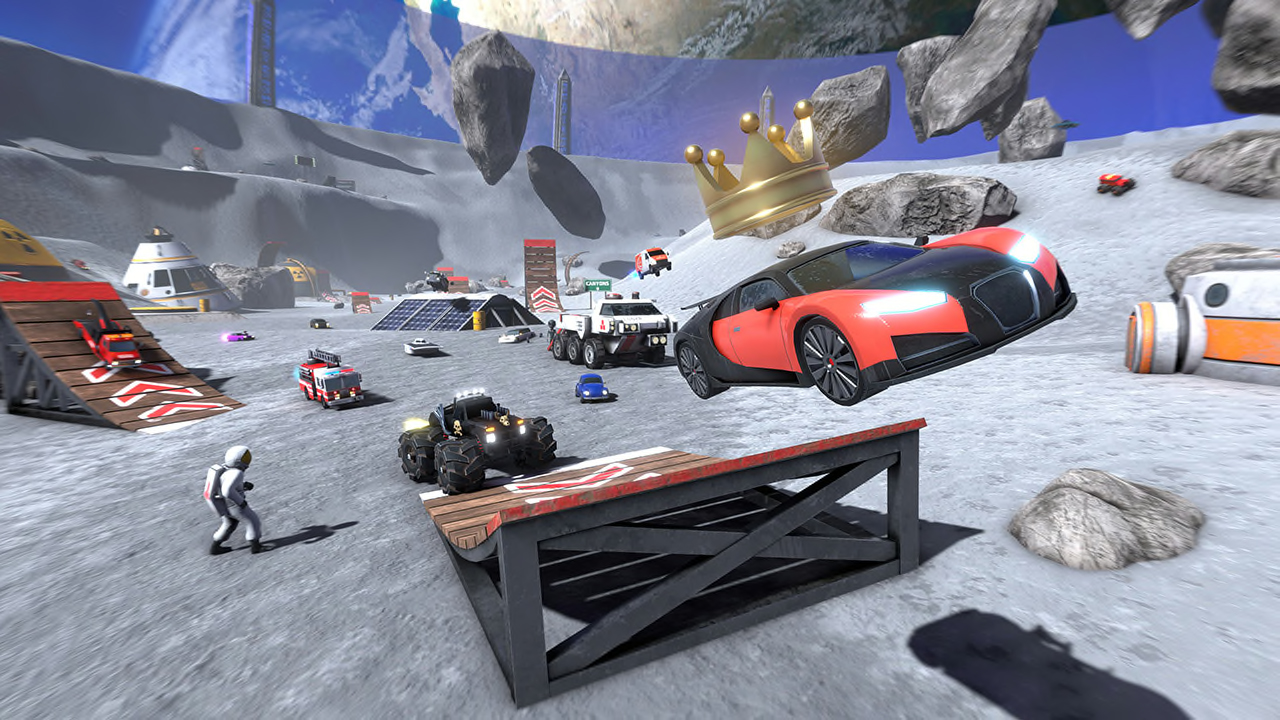 On your marks. Get set. Crash.

Crash Drive 3 is the latest installment from M2H, and it gives you lots of vehicles, jumps, and crashes. If you have not played any of the Crash Drive games, you may be wondering, “What sort of game puts the ‘crash’ before the ‘drive?’ ” I’m sorry, but I don’t have an answer for that one.

You might expect the newer editions of a game (especially when they are released for more capable game systems) to look really detailed and polished. You don’t get as much polish with this game as you might expect, but that doesn’t really hurt the experience. The vehicles and the environment may look a bit dated, but it doesn’t hit that annoying level where elements look like a bunch of flat plates tacked together. Round things look round, just not as smooth as they could be. Depending on the vehicle and the environment, the visuals are nice. The first environment puts this to a bit of a test, though. You start on a frozen lake in a snowy mountain region. There is a lot of white and blue going on, which can be a little monotonous. 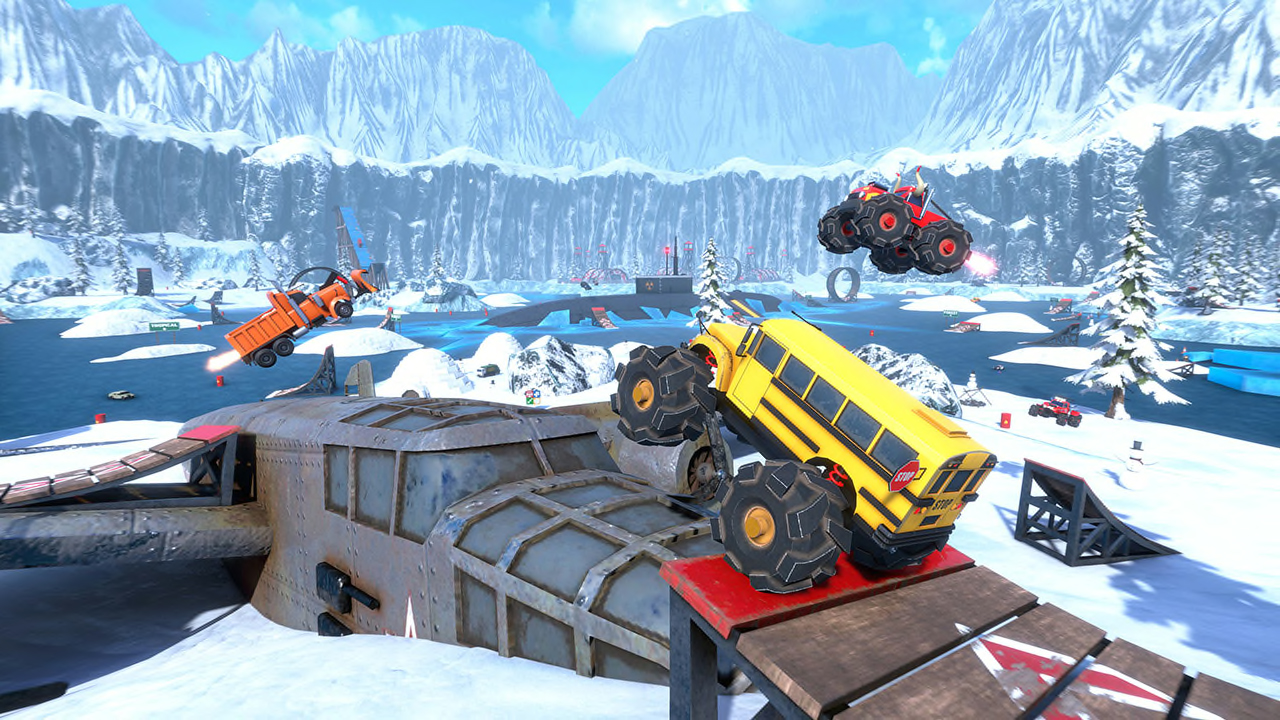 Speaking of environments, there are only a few, including the frozen lake, forest, and the moon. To unlock a new environment, you will need to score enough points in the current level. There are new cars to be had, but those require more points to unlock, as well. The game does a nice job of helping you stay on task during the challenges by showing you a green arrowhead over your vehicle, pointing toward the next objective. There are several challenges you can complete to earn points in each environment, as well as boxes lying about which provide in-game currency to buy upgrades. The game economy is nothing new, and it isn’t over the top with acquisition difficulty or exorbitant costs for upgrades which can slow progress to a crawl. While there are very few environments, the game makes up for this with over forty different vehicles with which you can play around and have fun. 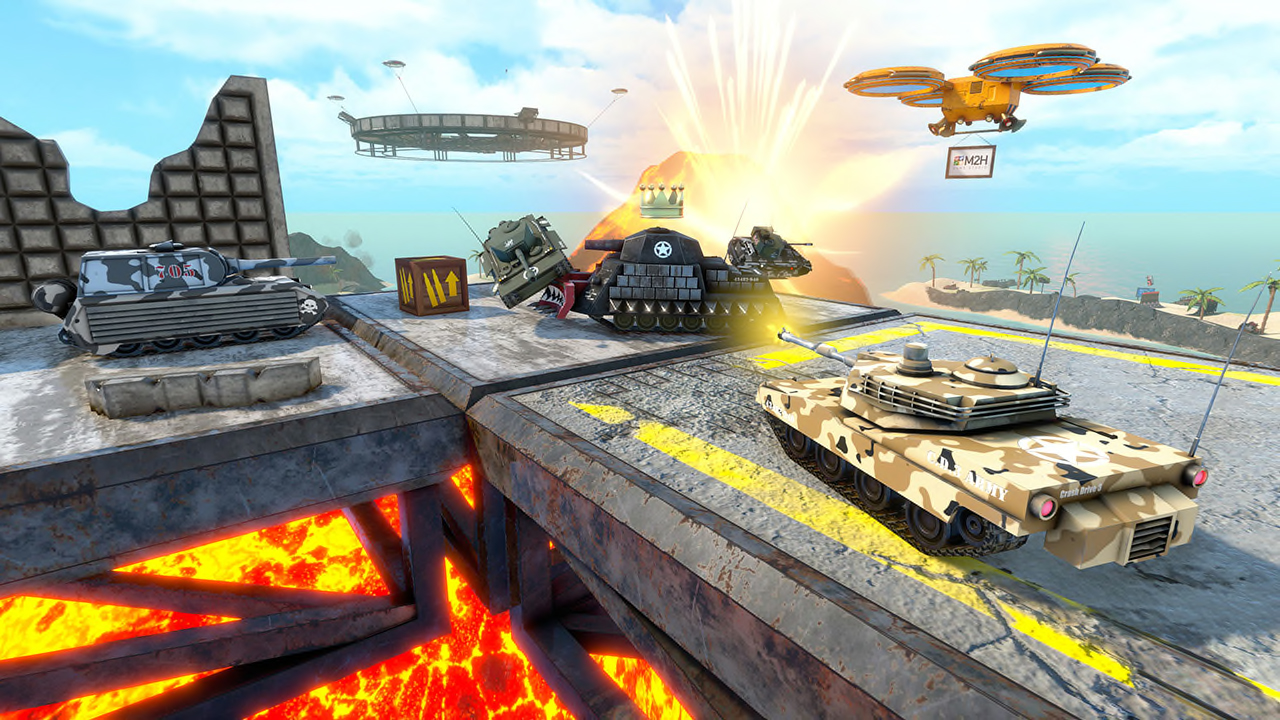 One aspect of the game you might not be ready for is the dichotomy of playing modes. The game has an offline play mode where it is just you and the environment. In this mode, you have the world to yourself and the game will set a series of challenges before you. Each challenge is timed, and they just keep coming so you can play as long as you like. There is a plethora of ramps, hazards, objects, and lovely little red barrels that explode when you touch them (I could say “when you crash into them” to keep with the theme of the game title, but the slightest touch will do it). These little bundles of joy can lose you time and cost you a win in an event, but at least you can score some points for the air time you get.

While you are playing solo, the game feels rather empty. Sure, there are ramps and stuff all over the place, but the series of short challenges seem a bit hollow. If you are good just exploring the place and testing all the jumps, then you can have some fun just goofing around. 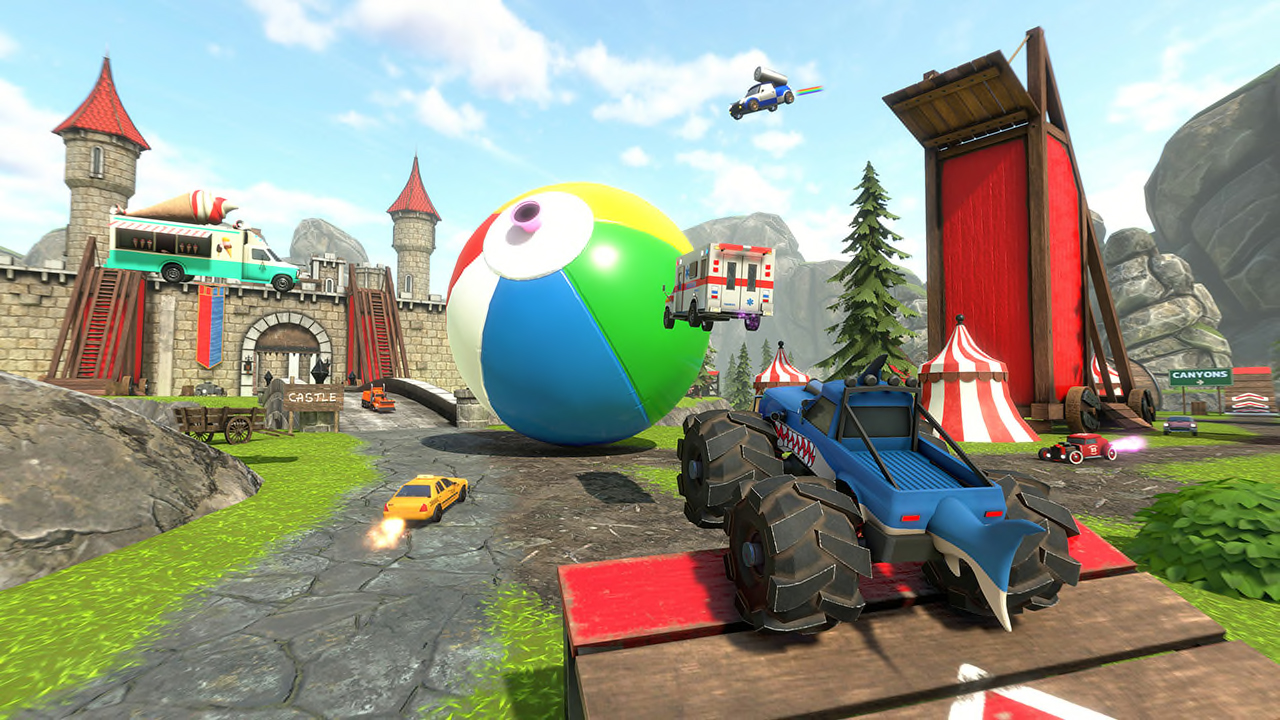 Where the game gets really good is with the online mode. Once you join online you enter the multiplayer environment. This is where the game really shines, as multiplayer mayhem is where you can have some real fun. The environments are the same, but there are a lot of vehicles running amok, jumping, drifting, flipping, and crashing into everything in sight. The single player challenges are here with a couple additional ones like King of the Crown, which is a cross between king of the hill and tag. In this, whoever keeps the crown longest wins the challenge. With all the chaos of the multiplayer environment, it becomes easy to appreciate that the single player environment affords you time to explore an arena in which you can practice before joining the scrum. It also lets you test out all the vehicles you have in your garage. 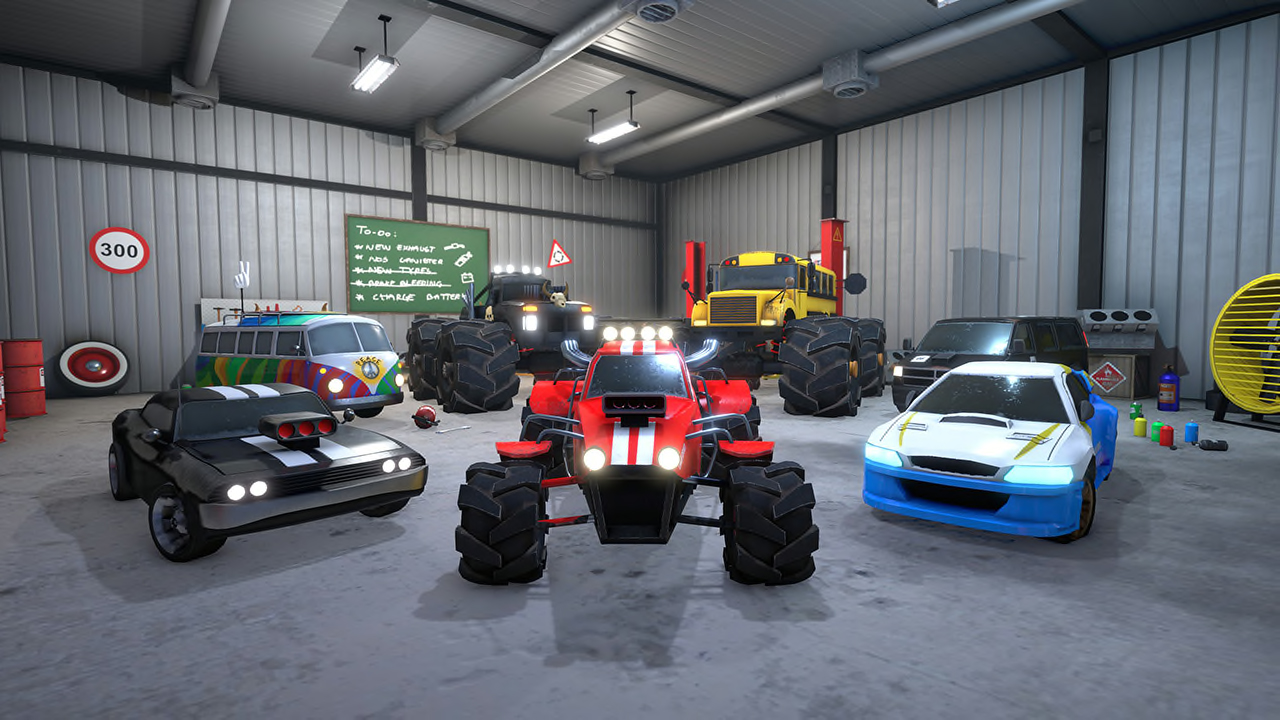 Different vehicle types will perform differently (sometimes, size and weight matter to doing tricks, etc.). The physics aren’t perfect, but they don’t need to be for the game to be fun. A couple violations of real physics are actually very much appreciated; for all the crashing you do, your vehicle still looks fine;. And when you roll over onto your top (and you will), the vehicle will right itself so you can keep going.

With all the racing and crashing, don’t forget to use the single player arena to practice with the controls. The number and layout of the controls is pretty well done. ZR is your gas, the left control stick is the steering, ZL is reverse, A is nitrous, and B is the hand brake. As a personal suggestion, get familiar with the combination of steering, using the hand brake to drift turn, and hitting the nitrous to do some quick whip around turns and stops. This comes in very handy on the frozen lake, the biggest hazard on which is the network of holes in the ice. You can spend a lot of time puttering around on the bottom of the lake looking for a place to get back on land. Since the ice is a static element in the environment, you can’t break it; you have to find a clear way up. If you do want to hang out underwater, the developers put in a couple of interesting features for you.

It may take a bit to warm up to Crash Drive 3 (it did for me), but it’s actually a bit of fun. The controls are well done, the visuals are a bit dated but fine, the sound is suited to the game and easily ignored in favor of something else if you want to listen to your tunes, and the action is non-stop. Just remember that it’s best enjoyed with other racers.

As a single player game, the arcade racer Crash Drive 3 can feel a bit empty. But it’ll very likely be a real hoot for the kids who just want to explore and goof around. As a multiplayer game, it can be a free-for-all blast.