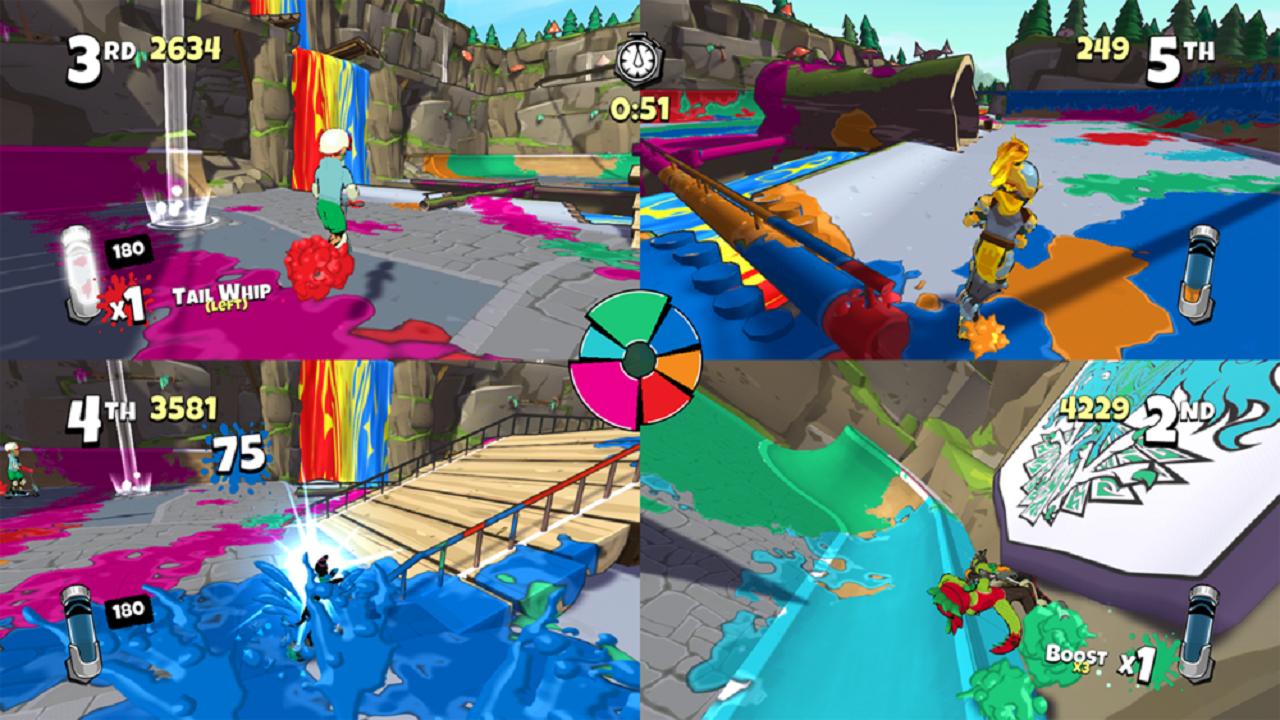 Crayola makes video games? Apparently! However, to me, there seems to be some Splatoon influence, with the colorful ‘splat’ of Crayola Scoot being a suspiciously similar substitute for ink. The difference is that in this game, you scoot around on a scooter.

You play through different events to gain points to help you go to the next rank. Once you get to the next rank, you go against a legend where you take turns doing tricks trying to top the other’s points. The loser gets a letter and if you get all the letters to spell out ‘SCOOT’ you lose and have to try again to beat them. Some of the champions include a robot, an alien and a knight. The legends mostly rely on puns as their gimmick to stand out from one another, so they are pretty one dimensional. You need to beat them all to reach the main goal to become champion.

Some of the events include Color Frenzy, a game where you try to color the most of the area with your color and Team Color Frenzy, where two different teams try to compete by spreading their color around. Sound familiar? Others include Crazy Crayons, where you try to collect five crayons before everyone else and Trick Run, where you try to get the largest score at the end of the time limit. There are also two variations of Splat Tag, one where you are the tagger, and one where you are the one being tagged. My favorite was Trick Run because it was kind of fun to discover new tricks and combos to land without messing up.

You play these different events in multiplayer too, which I found to be more fun with friends then going against computers My favorite game in multiplayer has to be S-C-O-O-T, which is like the game you play against the legends. You can adjust the words you spell too, like E-D-G-E and randomly P-I-G. A good way to get your friends used to the controls, without having them each go through the tutorial, is to play Cruise, which is basically a game where you run around a map with no objective.

Unfortunately, I don’t really have much good to say about this game. Other than the controls feeling a bit awkward, the majority of disappointment lies in that I feel they could have really had taken advantage of the fact it’s called Crayola Scoot. Maybe instead of playing as a boring human, you could choose your favorite coloring tool? You could play as a crayon, a colored pencil or a marker. It could have really benefited from a better story too. The story could be about how drawing and creativity brought all the wacky characters you compete against to this world. There are so many ways the game could have been more memorable, but it just isn’t.

Overall, I just found Crayola Scoot to be a missed opportunity for originality, fairly quick to beat, and disappointing. I wouldn’t say it is worth its current price of $39.99.

There are so many ways the game could have been more memorable, but it just isn’t.

Overall, I just found Crayola Scoot to be a missed opportunity for originality, fairly quick to beat, and disappointing. I wouldn’t say it is worth its current price of $39.99.