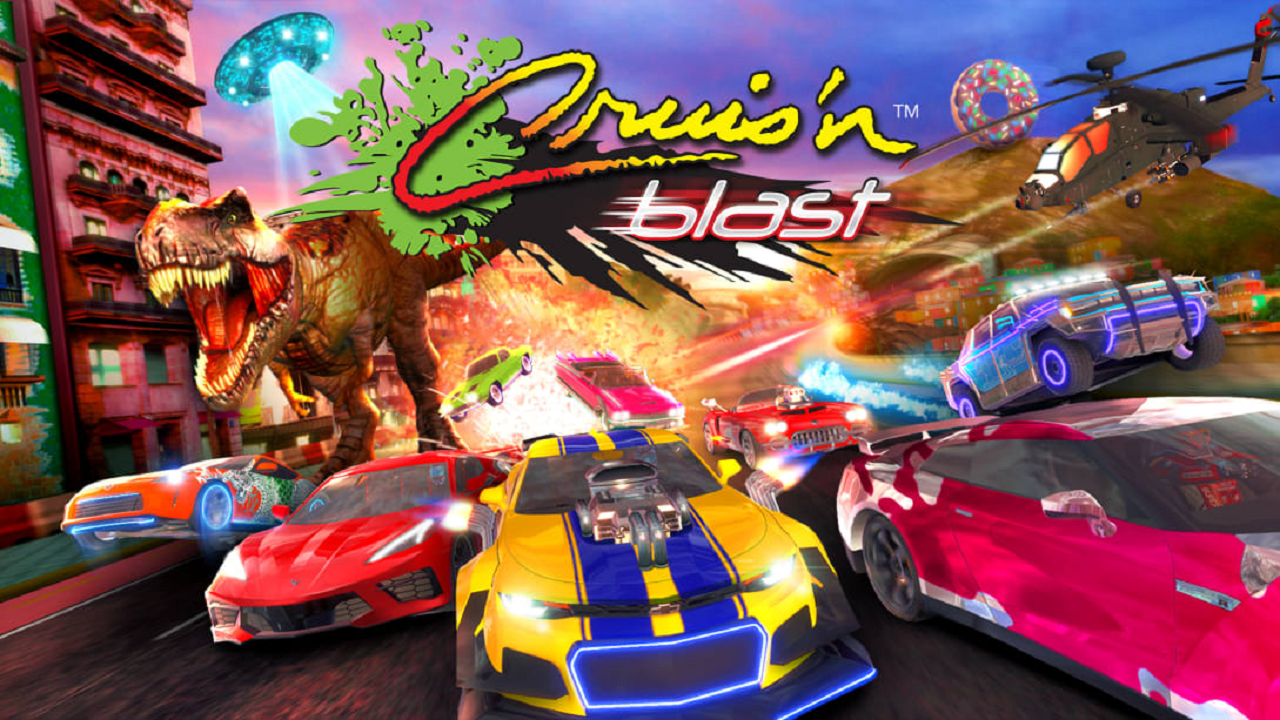 When watching Nintendo’s E3 Direct, Cruis’n Blast was the game that had me the most hyped. I’m a big fan of arcade racers, and Cruis’n was looking right up my alley. Unfortunately, poor choices hamper what could have been a rather enjoyable experience.

As an enhanced port of the 2017 arcade game of the same name, Cruis’n Blast offers fun driving mechanics across various courses. There are numerous over-the-top background elements to keep you engaged while racing. Things run along fairly well, with some minor dips in framerate here and there, but overall it runs decently.

The large number of rides to choose from are very welcome; I especially liked racing as the triceratops (who, I’m happy to say, can barrel-roll). It’s a bit disappointing that all cars feel nearly identical, despite each having individual stats. But, it does make swapping cars an easy transition.

As for the tracks, they’re pretty fun, with numerous large jumps and tight corners to drift around. But while the game boasts having ‘nearly 30 tracks’, a significant portion are just the same courses with slight differences. For example, there’s a track with Yetis featured as background elements and another one that’s the same track but with the Yetis switched out for dinosaurs. It’s a huge case of deja vu and leads to a very repetitive experience. You may as well just put PNGs of puppies all over a course and call it a ‘new track.’

The worst offender in the game, though, is the heavily scripted AI. Cars will refuse to be passed until fixed points during the race, and even if you manage to get by them before the game wants you to, they’ll merely speed ahead again. You’re able to blow up cars by ramming them at high speeds or into walls, but 90 percent of the time, they’ll whiz past you seconds later. I’ve even had cars respawn in front of me while blowing them up and speed ahead. As a result, blowing up cars feels unrewarding and is only of use during a race’s last few seconds.

Speaking of those last few seconds, the AI refuses to let you be in first place until the last few seconds of any race. Combined with the scripting of the AI in the first place, it makes the first 9/10ths of any race feel relatively pointless. I’ve had many races where I was doing a good number of seconds worse than previous attempts but still got first just because my ending was better. This scripting also means you’re practically required to save your boosts for the end, as opponent cars (especially on the higher difficulties) tend to speed up substantially at the end.

The above can be easily seen if you use the in-game currency to buy extra boosts for races. I’ve had races where I bought the maximum amount for testing purposes, and no matter how much faster I’d go, the AI insists on sticking to the script. For some reason, the game also lets you buy extra boosts in time trial mode. So time trials are pretty much pointless unless you buy the max amount.

Cruis’n Blast also features multiplayer, either on the same console or via local play (no online play). While I wish I could say it’s a different experience from single-player, the scripted AI, unfortunately, carries over, along with extreme rubber-banding between players. If someone is behind, the game gives them a large speed increase to try and keep players as close as possible during the entire race. It again leads to races where skill seems unimportant as long as you can cut ahead in the last few seconds.

All in all, Cruis’n Blast has the bones to be a good racer: it looks and sounds good, and the driving in it is enjoyable. But the scripted AI, and other poor choices, hamper most of the fun. Blasting through straightaways and drifting around corners is enjoyable, but what’s the point if the last few seconds are pretty much all that matters in a race? Cruis’n Blast was a bitter disappointment.