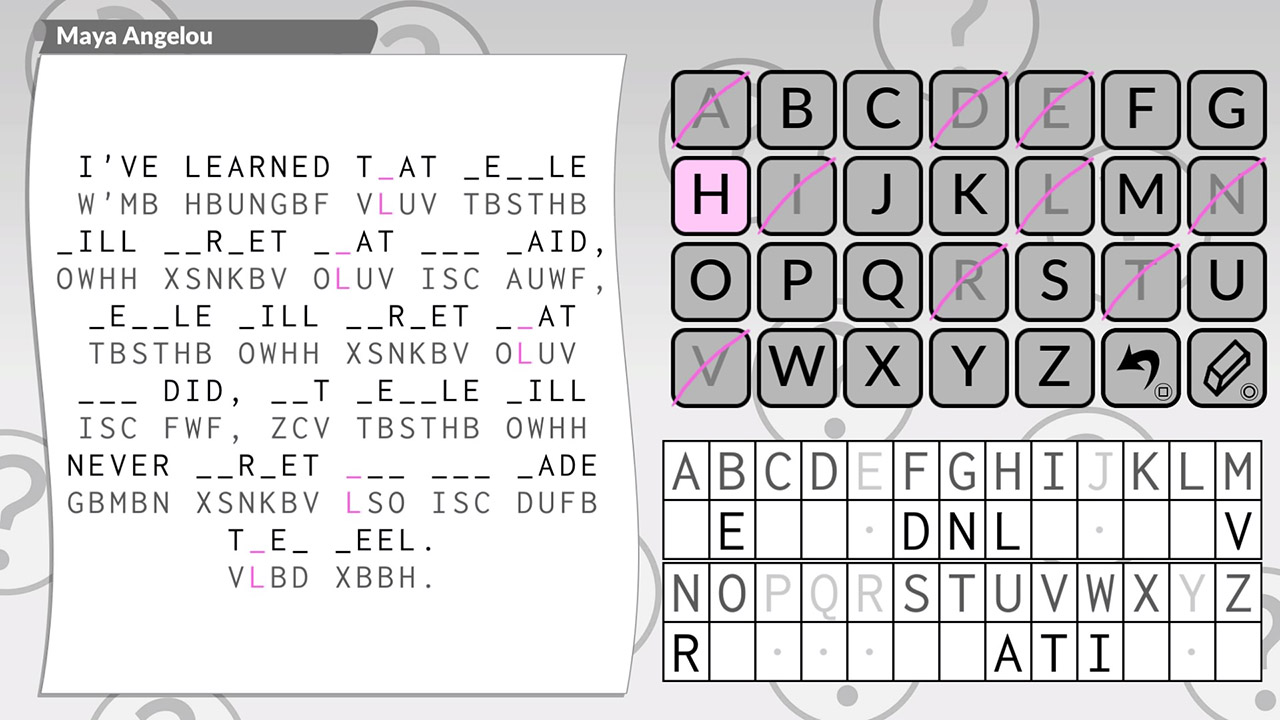 If you’ve ever played a puzzle game by POWGI before, you already know what to expect from Crypto by POWGI. It features a classic brain teaser, such as the kind that you might find in the back of any newspaper. Crypto features codebreakers in which you crack cryptograms to reveal 180 famous quotations.

The game is built with consistent POWGI branding. The rules are laid out clearly at the beginning and are easy to get back to if you’re not familiar with this type of puzzle.

It has the same chirpy, upbeat music and neat, clean layout as other POWGI games. As you reveal the answer to each puzzle, the page can get a bit busy and it can be difficult to tell the difference between the code and the solution. It’s definitely easier to see if you’re playing in dark mode, so it’s nice that it has that option. 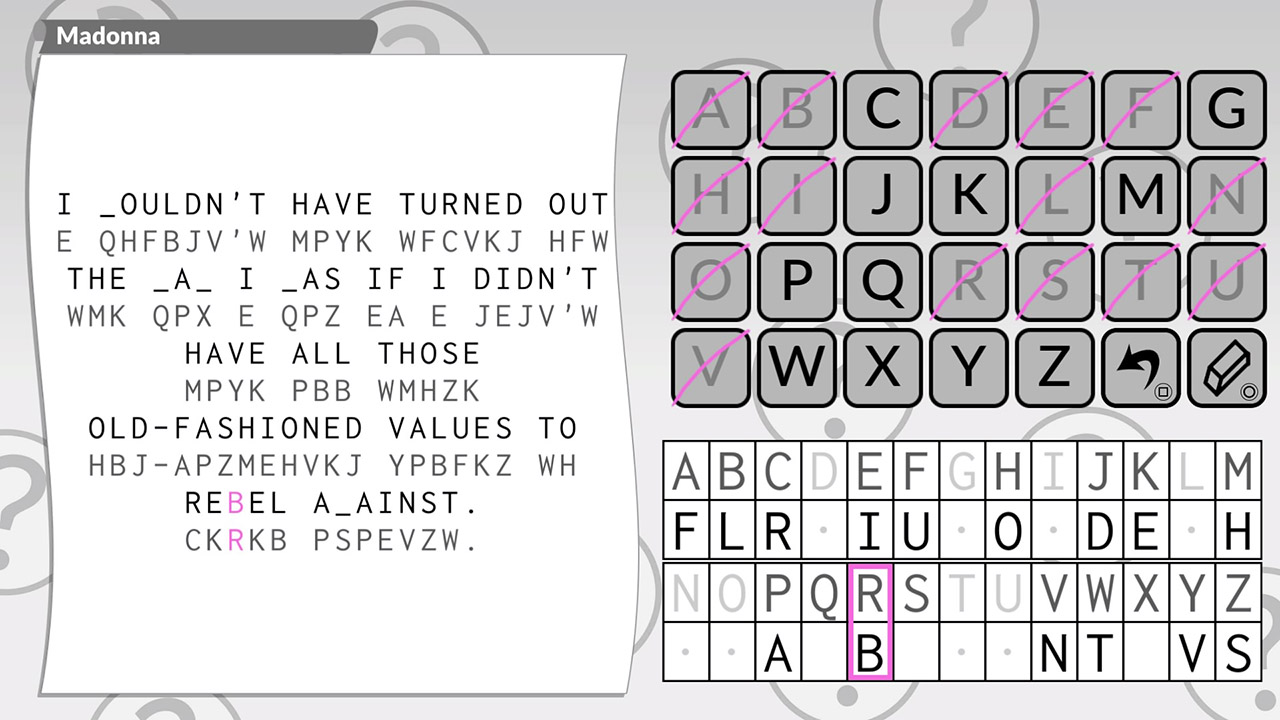 The quotations are very common and some of them can be quite easily guessed, even if you’re not familiar with every contributor. The mixture of jokes, snippets of motivational speeches and random clips from interviews can feel a little bit disjunct. There isn’t a consistent theme for the quotations, or even the people they come from. It was a bit surprising to see Harry Hill, Eleanor Roosevelt and Charles Manson on the same line up. The defining feature is simply that they are from well known figures.

This adds a little challenge to it, in that it’s harder to guess what someone’s quote might be. But that doesn’t mean the game is particularly hard.

It’s very easy to learn to spot common words that can help you piece together longer sentences as the letters fall into place like puzzle pieces. 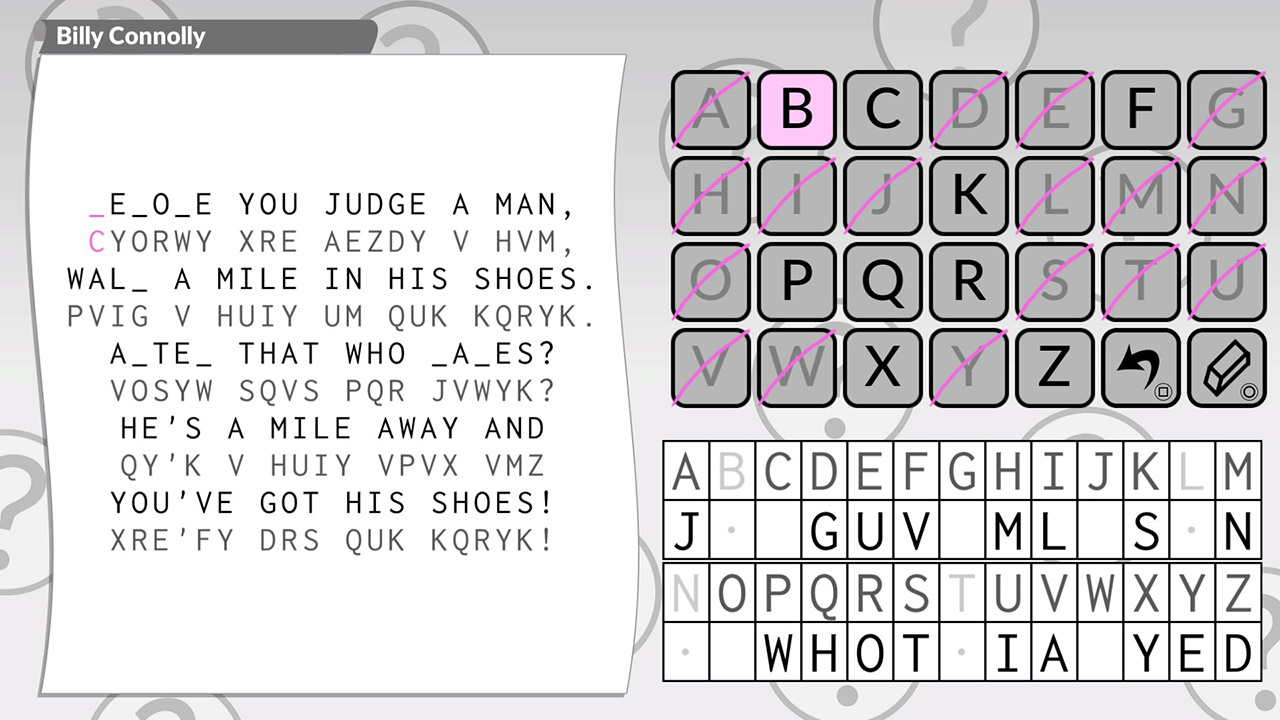 Crypto by POWGI includes 180 cryptograms in total. It would be nice if there were more, for a game that costs $8 for puzzles that you could likely find free somewhere online. If you do them a couple at a time, you can space them out over some time, but it’s easy to power through the lot of them in the space of an afternoon.

The benefit of buying the game is being able to track your progress through and experiencing that satisfaction when you can see that you’ve solved them all. But the game would be more worth the price if it had more puzzles, or maybe something that made it more unique. For instance, it could have featured quotations that fit a fun theme to give it a bit more character.

Crypto by POWGI is a clean and simple game featuring 180 cryptograms comprised of well-known famous quotes. It does what it’s good at effectively, but there isn’t a lot to differentiate it from puzzles you can find for free online.