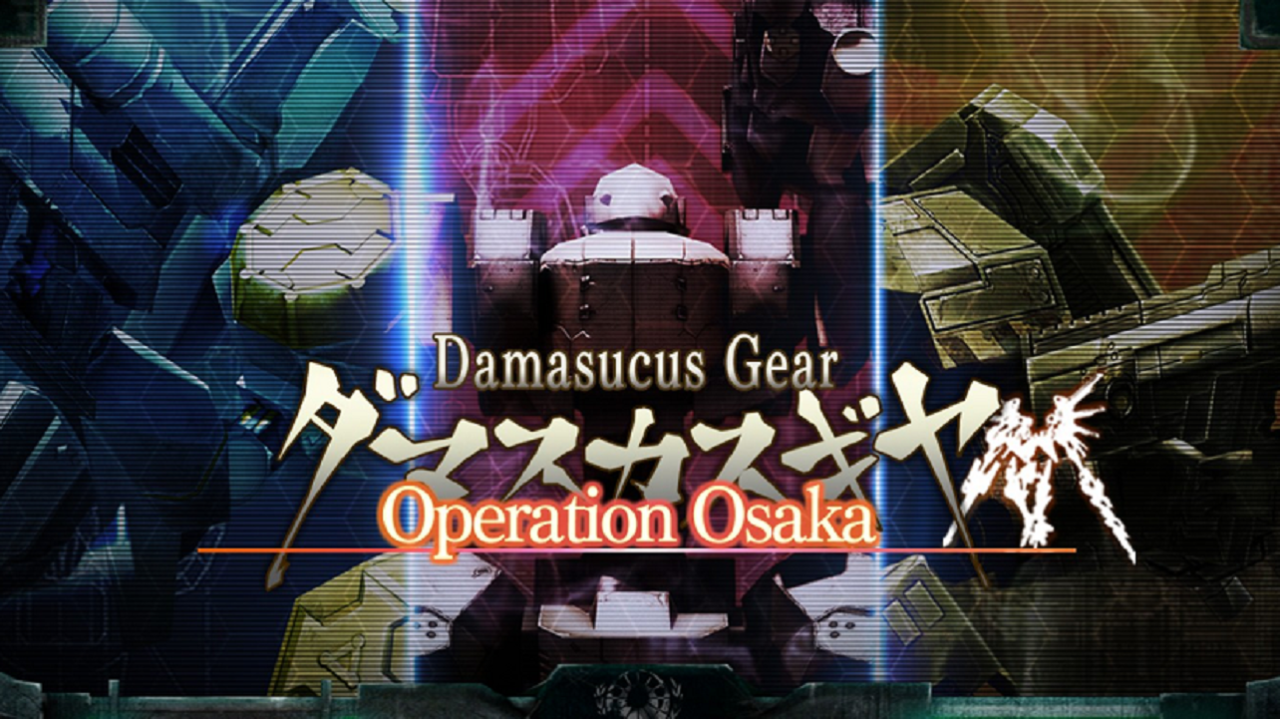 Damascus Gear Operation Osaka is a dungeon crawler with a cool twist. Most games in this genre (90%) are fantasy based with knights and magic etc., but this game brings Sci-Fi to the world of dungeon crawlers.

The story takes place in the future (didn’t see that coming). Japan was overrun with crazy, out of control, AI-driven gears (mechs) and while they were driven back, they still pose a threat. Fast forward 50 years to the present, you are … (insert name) and you have inherited your parent’s mercenary garage, complete with your own Gear, and silly AI android as an assistant. Like in real life, bad news always follows good news. You just got all this fancy stuff and a whopping 100,000,000 debt to go with it. Just when you thought it couldn’t get worse you only have 30 days to come up with the absurd total! So armed with your Gear, your wits, and the silly android, you set off to basically save yourself from being a corporate slave and losing everything you have.

Damascus Gear Operation Osaka was originally released on the PS Vita a few years ago, which makes it a great port to the Nintendo Switch with its portability. Visually it isn’t a stunner nor does it push the Switch hardware to new levels; however, that being said, it’s not bad either. The music, overall, is really generic metal tracks, but it’s decently trying to get you in the mood to beat up the bad guys.

Where the game really starts to shine is in the Gear customization. Taking a cue from classic games like Armored Core, customizing your gear is a breeze. Having seven different categories to customize like head, body, arms, etc… not only gives the player stat increases in different areas but also can change the appearance of your Gear drastically. To give more depth, there are seven stat areas that affect the speed, durability, accuracy, and defensive capabilities. But wait, there’s more! After completing a few days in-game, the ability to enhance your pilot opens up giving you access to far better skills and stat boosts using a point system. You can also go as far as painting and naming your Gear.

So how do we support our part collecting obsession? Like all good dungeon crawlers, you need a dungeon. Damascus Gear Operation Osaka has two different areas of combat; the first is going into the belly of The Cosmopolis. The Cosmopolis is the unused sections of the city that were originally planned for living space and other assorted uses. There are 40 levels increasing in difficulty as you venture lower into the depths. The second area of combat is the Arena, a necessary evil. In order to go to the lower levels, you must compete in the arena and go up in ranking. With each new rank achieved, more levels become available to explore. Arena battles have a far better payout for winning, however raiding the city depths can give great rewards in the way of better parts for your Gear. So the necessity to combat in both is a must.

The gameplay is very smooth, fast and easy to master. Your Gear can lock onto targets and strafe, sprint short distances, or boost long distances with zero cool down! Each of your three weapons has to be reloaded, this is done automatically via a short cool downtime. Combat is fun and very fast-paced.

Like I said before all good news is followed by bad news. The most disappointing aspect of the game is honestly the most important part, the dungeons. They are supposed to be randomly generated, however, they are not and lack a lot of variations for the first 20 levels that you are put in randomly. The layout of the maps are very bland and lack any distinctive features. The only level that resembles a city is floor one where you catch the elevator to go down. For a place that was overrun, you would expect to see leftover machinery and incomplete structures; but it’s nothing but empty hallways like the interior of a spaceship…with no doors! The rooms, where doors would be are separated by little green holographic banners. Every so often you’ll run into a floor defense machine, or a rage infected AI, watch out for these, they are no joke and can one-shot you most times early on in the game. The look of the maps changes slightly as you get to the deeper levels but have the same layouts, but use different skins. Aside from the lackluster maps, they did try to add a bit of variety. You can randomly enter a floor with high security such as traps, mines, moving laser barriers, or a floor being invaded. Those were my favorite floors.

I honestly wanted to give this game 10 out of 10, but the maps almost killed it for me. Even with the maps the way they are, however, I still enjoyed my time playing. I mean who doesn’t love giant gun-toting robots? Overall for what Damascus Gear Operation Osaka has in content and gameplay, I would spend $20 all day long. Don’t pass this one up, if you like mech-based games.

Even with the maps the way they are, however, I still enjoyed my time playing. I mean who doesn’t love giant gun-toting robots? Overall for what Damascus Gear Operation Osaka has in content and gameplay, I would spend $20 all day long. Don’t pass this one up, if you like mech-based games.