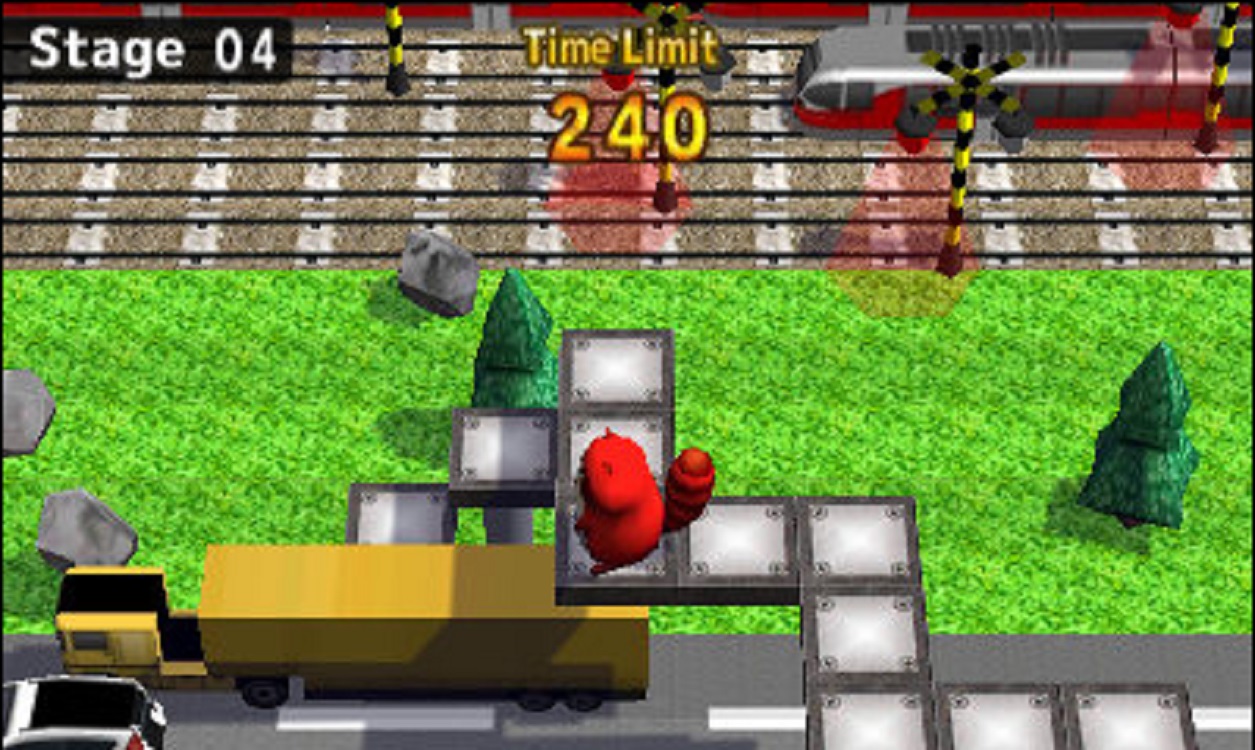 Cross a busy road avoiding the traffic, dart across train lines missing the speeding trains and leap across gushing rivers on moving logs.

The Frogger-ish Dangerous Road presents two modes of play. The first (and main) is Goal Run, where you try to make the stage-end flag appear by hitting “checkpoints” scattered about the traffic. You’ll be moving all around, but ideally in the quickest route possible; the game saves your fastest clear time and step count as replay incentives. I noticed there are touches of randomness with the stage design – vehicles and floating logs changing directions for instance – so failure doesn’t mean replaying the same each time. 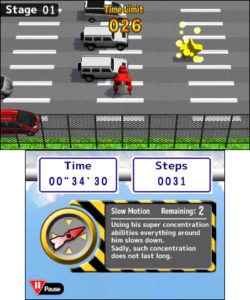 Survival Run, which gets unlocked, is the mode best for shorter action. It’s one minute design is ideal, but there are ten fewer stages than Goal Run. It also doesn’t record your step count as you dodge traffic for some reason, which I found disappointing.

There are four characters to select from, but it’s a shame they’re so uninteresting, largely due to their marginally effective skills. Extra speed is more of a hindrance than a help. Jumping proves largely ineffective. The ability to travel on water is rarely of use. Only the means to briefly slow down time comes in handy on a consistent basis. 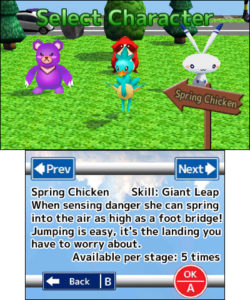 The controls could be improved. I wish the ability was granted to reassign them. Even more, I wish there wasn’t a delay in responsiveness. Tapping the d-pad (the circle pad’s not usable) I quickly noticed that seemingly small delays in responsiveness added up.  With only one misstep allowed, failure might often stem from the controls. The invincibility star helps some, but even that has issues. Don’t be surprised if you fail the first few times using it; it’ll show as active slightly longer than it actually is.

With a few exceptions, the looks and sounds are what I’ve come to expect from budget priced 3DS eShop games. The dated presentation certainly isn’t bad, but overall it’s not a remarkable one. None of the music has stuck with me for example. Giving a choice of camera angles is a nice touch however 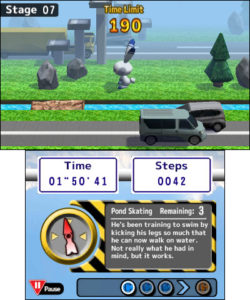 With more responsive controls Dangerous Roads could’ve been something. It was keeping me entertained at the start, but the more I played, the more issues became apparent. For just $2.99, this isn’t a poor purchase, but it is just an average one. Probably only a buy for Frogger fans wanting a time passer with a reasonable assortment of content. Perhaps look at Starsigns better release, Collide-a-Ball first?

For just $2.99, this isn’t a poor purchase, but it is just an average one. Probably only a buy for those wanting a time passer with a reasonable assortment of content.