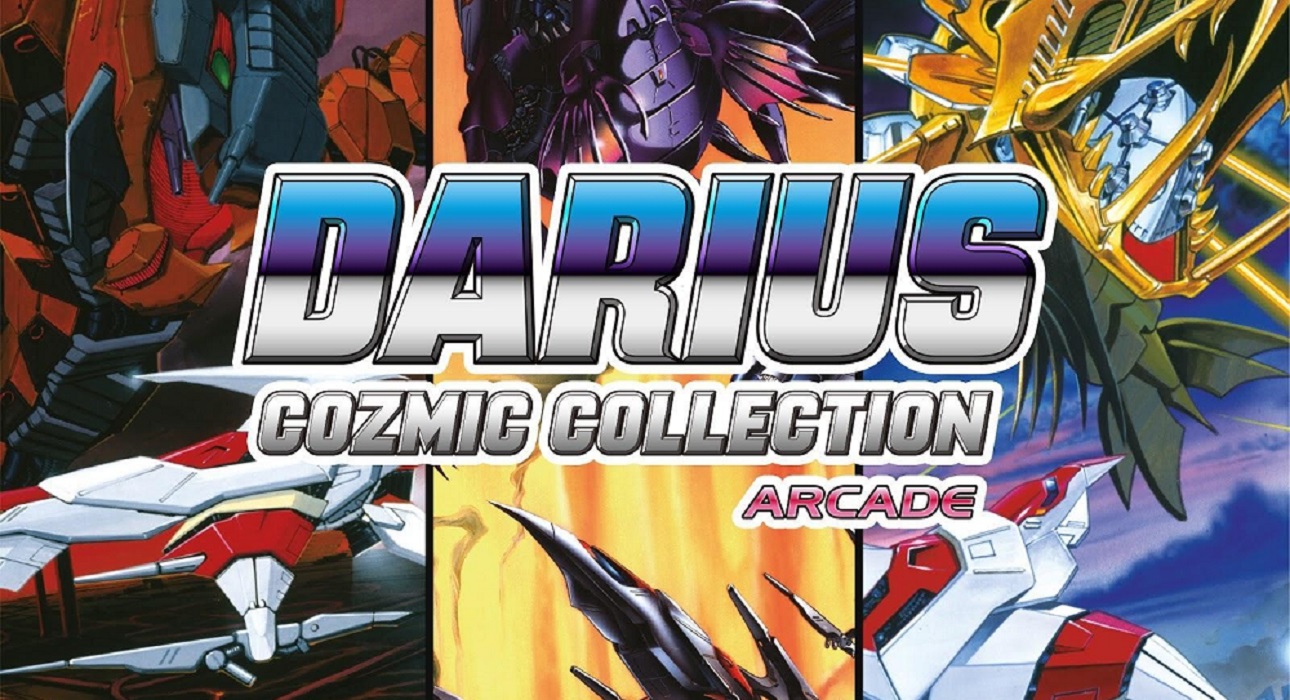 The original Darius through Darius Gaiden (also the Sagaia variations) are included in Darius Cozmic Collection Arcade. Right from the arcade to the Nintendo Switch.

This title is the definitive collection of the Darius series. The series was one of the first arcade games to use multiple linked monitors to give a large swept scrolling playing field. They had high fidelity sound systems built-in, providing an amazing experience. They also were insanely challenging. These games were built to vacuum your quarters right out of your pocket! Taito had cornered the market in the ’80s and ’90s with the Darius series, the most challenging shmups of the time used widely in competitions back in the day.

Each title in Darius Cozmic Collection Arcade has two modes. Normal Mode plays exactly how you’d expect from the arcade, with great gameplay, visuals, and difficulty. Normal Mode lets you keep track of the high scores. There is even a playback mode where, after running out of lives, you can save your run and upload it for others to watch. You can also download other players’ runs to watch and learn patterns.

Practice Mode is everything Normal Mode has with the ability to set up your ship with the best gear and level of potency. Co-op mode is available as well for you and another equally crazy friend to get punished by the crushing difficulty.

The visuals are straight from the arcade, with nothing remastered. The original Darius shows its age but still doesn’t look bad for a game released in 1987, back when you could play this while chugging a Pepsi Free or sipping a can of Tab. Darius II is slightly more refined in detail (not by much), and the music is, well kind of weak but not awful. Darius Gaiden shines here with its pseudo-3D graphics that honestly still look awesome with its multiple layers of parallax scrolling and sprite scaling. Darius Gaiden seems to be the best out of all, both visually and musically stunning. It also has the most developed gameplay and has features the other games do not, like mid-bosses and a black hole bomb to add to the usual list of power-ups. Note: Crystal Pepsi not included.

Each game also has a map reminiscent of SEGA’s OutRun, where you have to pick a direction at the end of each level, giving a large variety that differs from the others. I haven’t mentioned the Sagaia games as they’re just the original two Darius games under different names, released in different regions, with little to no notable differences.

Even if you never saw one of these games in the wild as a kid, you’ll likely remember playing them on home consoles. I have Sagaia for the SEGA Master System, and it’s just as hard as the arcade. So it’s a treat to get to play the actual arcade games at home. BUT, and here comes my personal issue with this release, the biggest issue is in the presentation. Visuals, sounds, and gameplay are all great! But the games were designed to run on multiple monitors, giving a large open field of vision. The drawback to that is when you take that and put it on a single screen, it is shrunk down to allow that field of view. On my 55″ LED TV, it still looked tiny from less than 10 feet from the screen. On the Switch screen, the original Darius was almost unplayable for me…if I were 15 with perfect vision, I probably would be okay. Darius II does a much better job of using the Switch screen, with 85% of the screen being used for the game. Darius Gaiden, I believe, used only one screen and was the best in playability.

The issues with how screen resolution has to be used to give accurate displays of the original Darius and Sagaia in truth, I doubt, could be fixed or changed without hits on gameplay mechanics. The fact that with modern widescreen TVs they can take that multi-screen set up and put it on one screen is, in short, very cool. Considering the mirror trickery that was needed to get three CRT monitors to look seamless was In itself a trick of engineering magic in the ’80s.

Other than the original Darius and Sagaia, these games are a great way to play a series of seriously challenging arcade shmups from the past where arcades ruled.

Other than the original Darius and Sagaia, these games are a great way to play a series of seriously challenging arcade shmups from the past where arcades ruled.