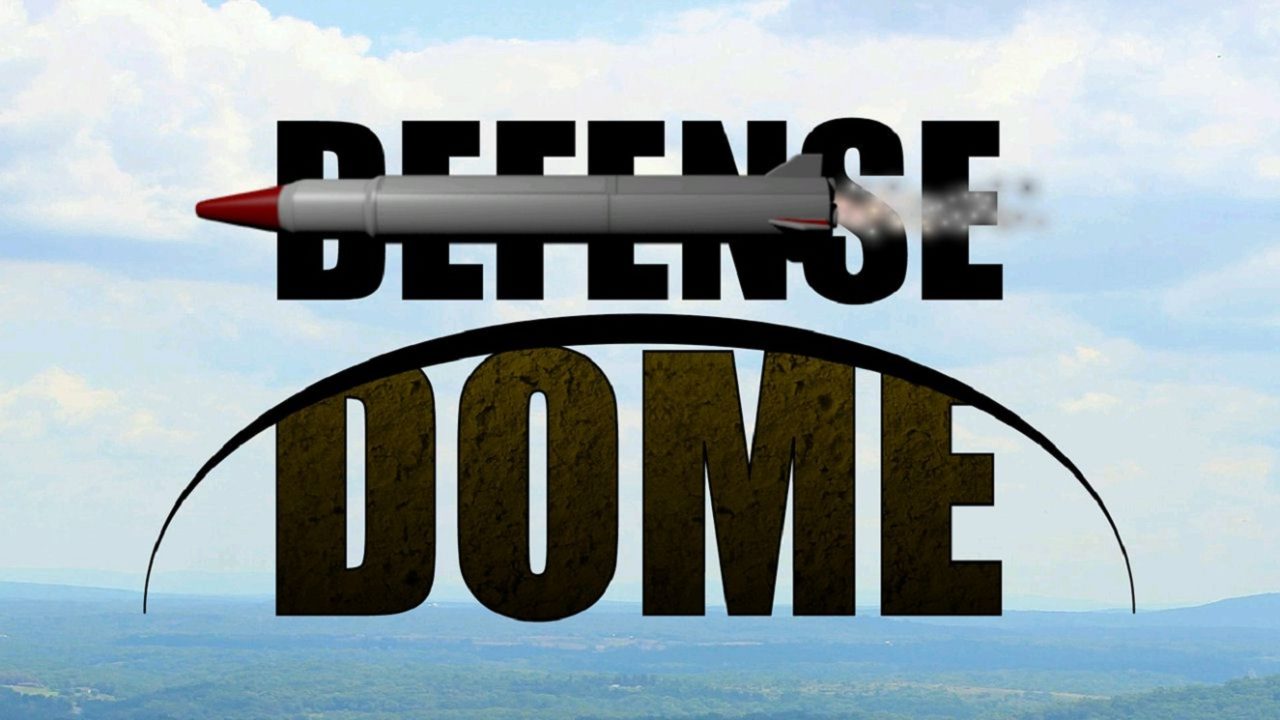 Defense Dome is touted as a classic, arcade-style game. The simple premise sees you control a cannon with the sole purpose of shooting down as many missiles as possible.

The Wii U GamePad serves as your cannon, with gyroscope controls used to aim and the ZR button used to fire upon missiles as they fly past. It’s a seemingly good concept on paper that actually sounds slightly fun, and probably could have been in short bursts. Unfortunately, Defense Dome misses the mark completely. This game is just awful.

The main letdowns of this game are graphics, gameplay and controls. Let’s start with the graphics.

The main screen is a top-down “map” that shows the five levels on offer. I say “map” like that because it’s the worst-looking map I think I’ve ever seen. It’s basically a green and brown topographical-style map that shows no useful information apart from stars to mark the five levels. Those levels are named in boxes over on the right of the “map”, with text that’s blurry and impossible to read until you select the level. Those green and brown colors presumably indicate forests and desserts, however two of the levels are designated as “Port Towns”, so go figure. 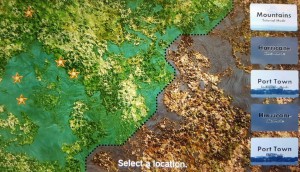 This is the “map”

You also can’t use the touch screen to select a level, which seems like poor design. When you work out how to select one, you’ll be taken into the cannon, with the GamePad’s view changing to a window. Basically, it’s a rectangle of sky, with a very small line of scenery at the bottom to show the horizon. It’s not very impressive. But this is where the controls come in.

The first of the five levels is called “Mountains” and contains a tutorial that explains how to play. The controls are simple since you can only shoot by using the ZR button, and this is not customizable.

You can zoom in and out with the control sticks, but you’ll want to zoom out immediately. Zooming in is completely useless, since your window won’t show a missile for long enough to actually hit it. You can also reset your gyroscope, which you’ll do often, too. The screen seems to randomly drift diagonally to the side after a while. It’s quite dizzying and very distracting, making targeting even more difficult than it already is. Which leads me to the gameplay aspect.

Although it’s pleasing to see an innovative use for the GamePad, it’s just a shame that it’s not done well. Apart from the distraction of the drifting calibration, the timing required between firing your cannon and hitting a missile is not at all intuitive and feels completely unrealistic. It doesn’t get easier with practice, and near and far missiles are equally hard to hit. It’s not at all fun to play. The game itself is short and the gameplay repetitive, with every level essentially the same: you’re always looking at a drab, gray sky watching missiles fly from right to left, while you try to hit them. The end.

I deliberated long and hard over this score as I don’t like to be scathing in reviews, but honestly, I cannot recommend this game on any level. Please heed my advice and avoid Defense Dome at all costs. The price tag may be small, but don’t let that tempt you, it really isn’t worth it.