For some, Dementium is a little unusual when compared to other Renegade Kid titles like Mutant Mudds, Bomb Monkey, and Xeodrifter. But let me assure you, Dementium still has the Renegade Kid love and passion throughout….oh, and it also shows a very dark side of the happy company we see on social media. 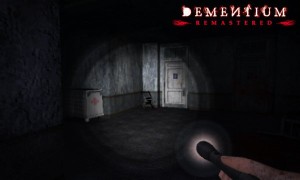 Dementium is a survival horror first-person shooter game that starts with the main character, William Redmoor, waking up to what he finds as an empty hospital ward. While exploring, many mysteries unfold: Why are you here? What is that noise? What are those monsters? What does that ghost Girl want? It’s hard to really dive into the story without giving too much away. Let’s just say the story does not disappoint and will keep you guessing all the way until the end.

One thing I have always raved about in Renegade Kid produced games is the powerful sound design. Dementium Remastered is kissing perfection when it comes to sound design for a 3DS game. Every turn there’s some different sound occurring that makes you wonder – what was that? The music is beautifully produced to create the appropriate atmosphere for the game – and that atmosphere evokes horror and suspense. 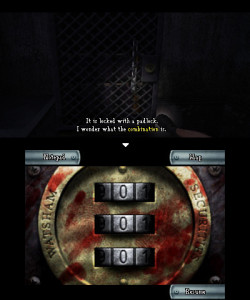 Dementium does a nice job keeping the suspense and horror throughout the whole game. Once the player awakes from the hospital they are surrounded by blood on the walls and an eerie quietness. Upon some exploration, sounds begin to filter through the darkness as you start to find your way around. The player will quickly find a flashlight that helps tame the dark world around them, but there is a catch. Without the flashlight, the curtain of darkness hangs just a few feet in-front of the character. This becomes tricky when fighting an enemy, because only one item can be held at a time. Players have to quickly choose between running with the light of the flashlight, or standing their ground and fighting in the darkness. This can be troublesome when fighting multiple enemies at a time, especially if one is hiding in the darkness behind you. One nice Renegade Kid spin is what happens while firing a gun. One could fire aimlessly into the dark, in the direction of a monster, and the flash of the muzzle would light up the room enough to adjust one’s aim. This way you can track down the enemy to defeat them, but you better be careful by saving those bullets. There’s also a variety of other weapons besides guns but I will leave those for you to discover on your own. Dementium Remastered is an OK shooter but where it really shines is as a survival horror adventure.  In any good survival horror game the key to success is finding a way to simply survive.

Dementium Remastered offers some interesting, and difficult puzzles that came as a pretty good surprise in the game.  Not only are the halls of the Ward mazes in themselves, but exploration is key to finding clues to open a locked door, a case or just a means to survive. Even with the clues, some critical thinking is needed to solve some puzzles. Like a good detective, the player carries around a notepad, which is launched on the Nintendo 3DS’ lower screen. This notepad can be used to write your Last Will and Testament or take notes from your exploration of different areas.  These clues will be the key to advancing successfully through the world. 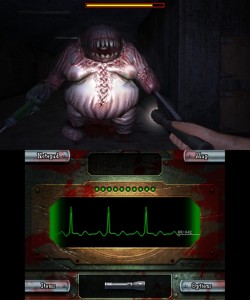 One example of this happens pretty early and it’s probably the easiest puzzle. After waking up in the Ward you will find yourself stumbling around frantically trying to figure out what has happened and what you need to accomplish. While walking around the various rooms you will run across some numbers written on a wall. Take note of these numbers for they are used to help get yourself out of the first area.

Dementium Remastered is an excellent handheld horror adventure with OK first-person shooter aspects. I don’t really blame the game itself for a less than perfect first-person shooter experience. It’s hard enough to make an excellent FPS for the 3DS. It’s even harder to make an FPS into a survival horror adventure game on the 3DS. The game does offer four variations of controls: two for left-handers and two for right-handers. Trying to wrap my sweaty hands around the original 3DS was difficult so I found myself going back to using the stylus like the original game was designed to use.

Dementium Remastered is a wonderful horror adventure game that will leave you crying in the corner.