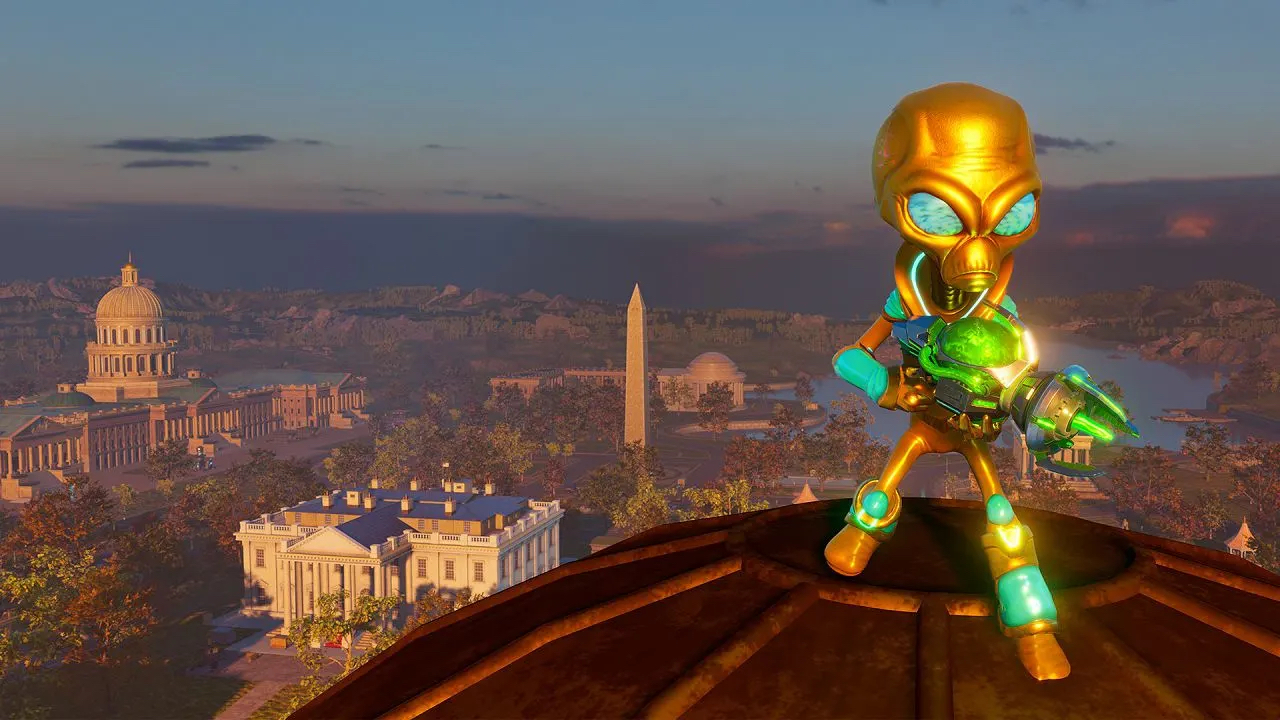 For dark is the suede that mows like a harvest.

I got a text from my editor saying we needed a review on a game called Destroy All Humans. I said it sounds like fun—hit me. I had not played this title before, and thought maybe it was a twist on Destroy All Monsters (you know, all the kaiju from the Godzilla universe battling it out and laying waste to cities around the world). Not quite. If you have not been exposed to Destroy All Humans before, it is a 1950s “little green men from Mars” coming to kill us all sort of thing…and it’s a hoot.

To introduce some of the main characters and plot (minor spoilers…), you get to play the part of Crypto 137, an alien sent by his people to harvest pure Furon DNA from humans. Your commander, Pox, will provide you with mission goals and upgrades, provided you have enough “currency” to buy them. Being alien invaders, you get tools and skills like a Zap-O-Matic, Abduct-O-Beam, Death Ray…you get the picture. 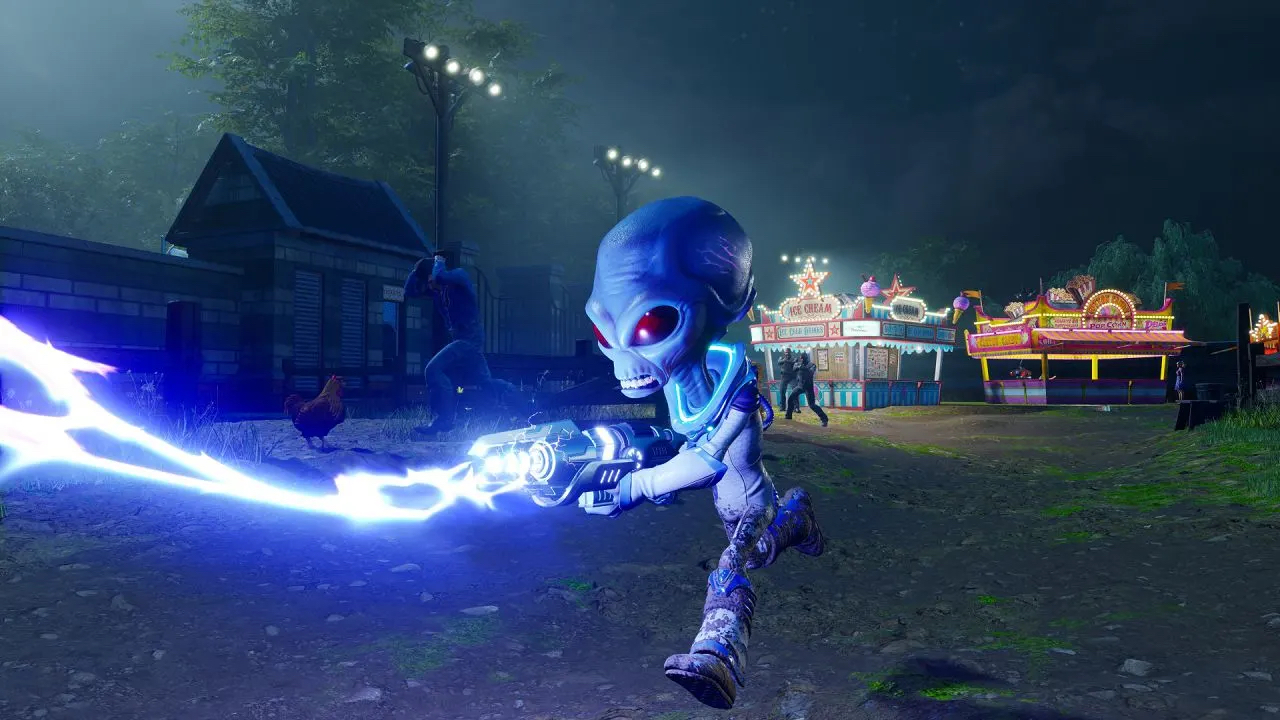 At this point, I will level my one caution, there are a couple of elements in the game which make this a bit less than kid-friendly. The skills section contains a certain type of probe and some bouncing cars near the fairground (you know what I mean).

The banter between Pox and Crypto is pretty funny. There were a couple spots where I found myself giggling at Pox because he sounds a bit like Invader Zim (if this was intentional, it’s another plus on the pop culture references).

This game plays well on the Switch; I don’t have any real complaints about confusing controls or odd button combinations. The only thing which might be missing is a way to jump out of the game and check the control options (– and + don’t seem to do this at all parts of the game). I only added this because I’m not the greatest at remembering a new button in the middle of gameplay, and it set me back a bit with the holobob (more on that one later). 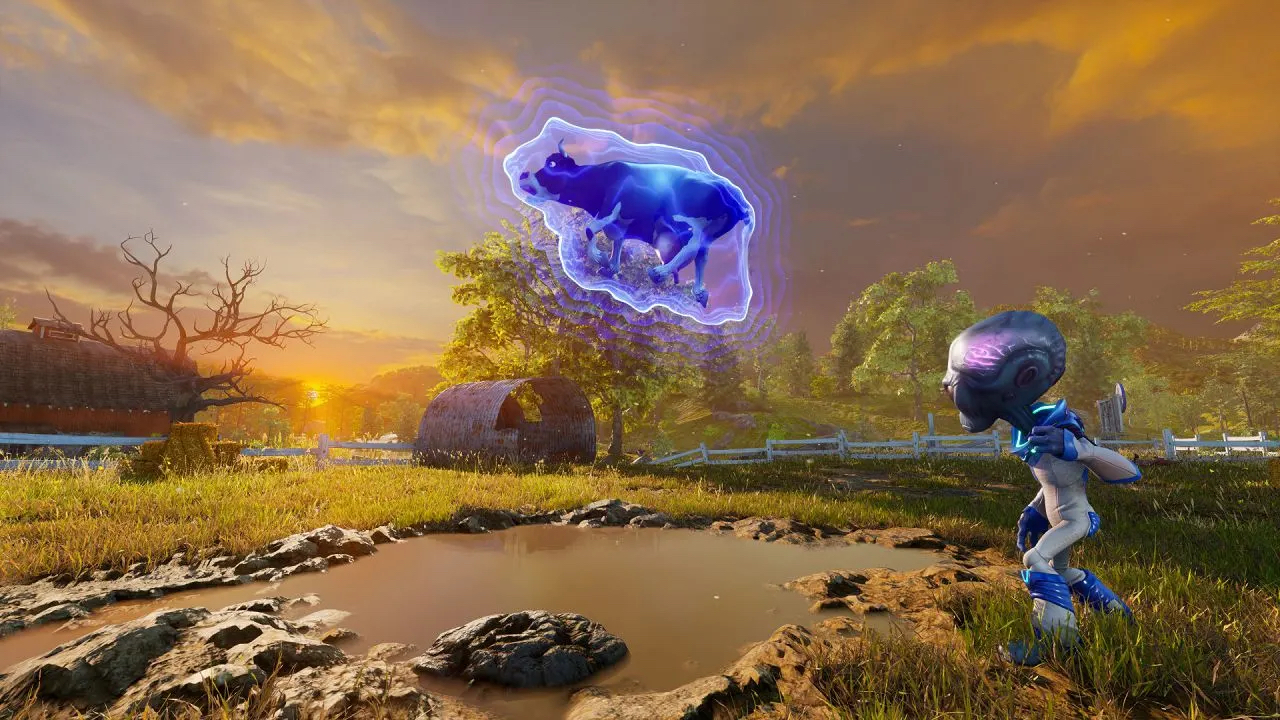 The original version of Destroy All Humans was released over 15 years ago, and there are some aspects which are showing their age. The refresh rate could be a bit higher; the specs say 30 fps, but there are times where it looks slower. This may be a bit annoying, but it isn’t tragic. The game looks good in handheld mode, but I found the TV to be a better option, even with mixed features. Yes, you can see all of the little things better, but some of the textures and details are not clean and clear. The trees and shrubs look a little sparse, and the people have a bit of “old graphics” appearance about them. 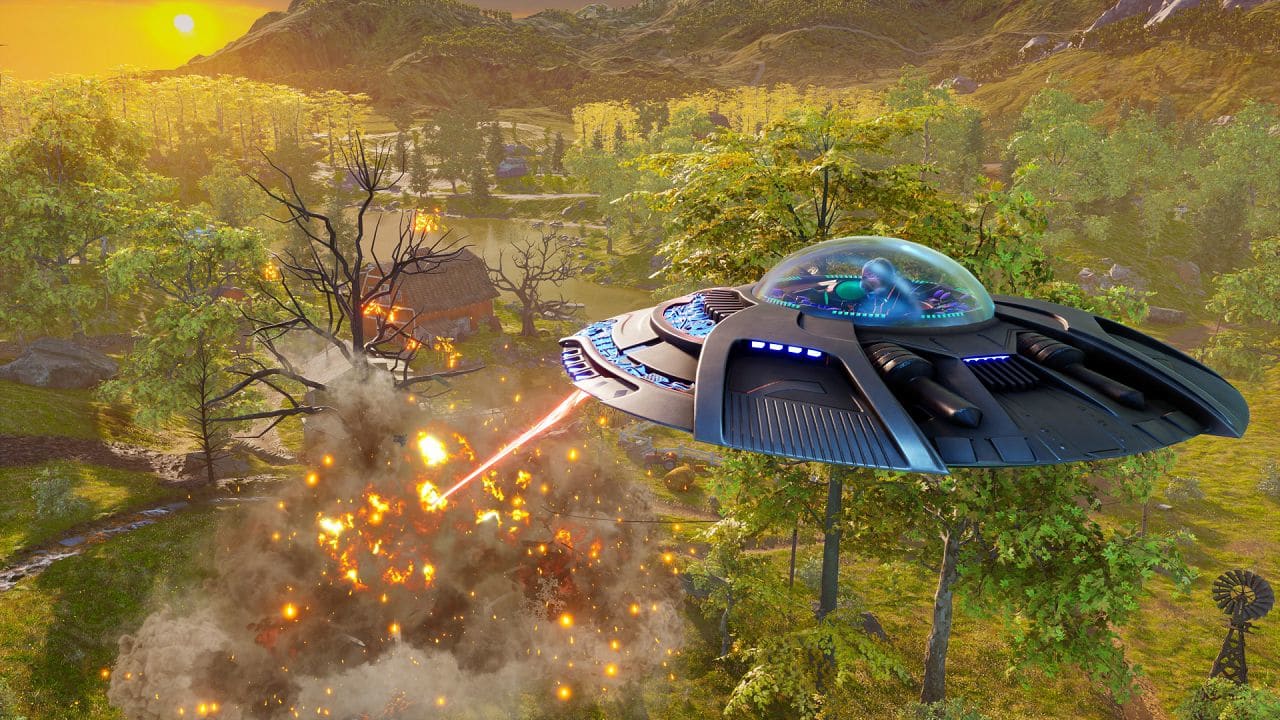 Even with the somewhat dated visuals on the large screen, I found it to be a tolerable tradeoff for being able to discern more details, including some cheeky nods to pop culture. In the first couple of challenges, you visit a movie theater playing “Plan 42 From Outer Space” which hits two references nicely. One of the updates is a new set of skins for your avatar, Crypto 137. You have to earn points to unlock some of the skins, of course, but you can still dress him up like Elvis almost right from the start.

The basic story is just that, pretty basic. You’re an alien, and there are humans. Destroy them and their stuff. Fortunately, there is some character there. The aliens are developed enough to not feel like cardboard cutouts, and there is some variety to the townspeople. You get the paranoid military types who want to shoot anything that moves, the police who just want everyone to calm down, and a bunch of townsfolk who just won’t calm down—well, until you hit them with your mind control or the brain removal skill, whichever you want to use. 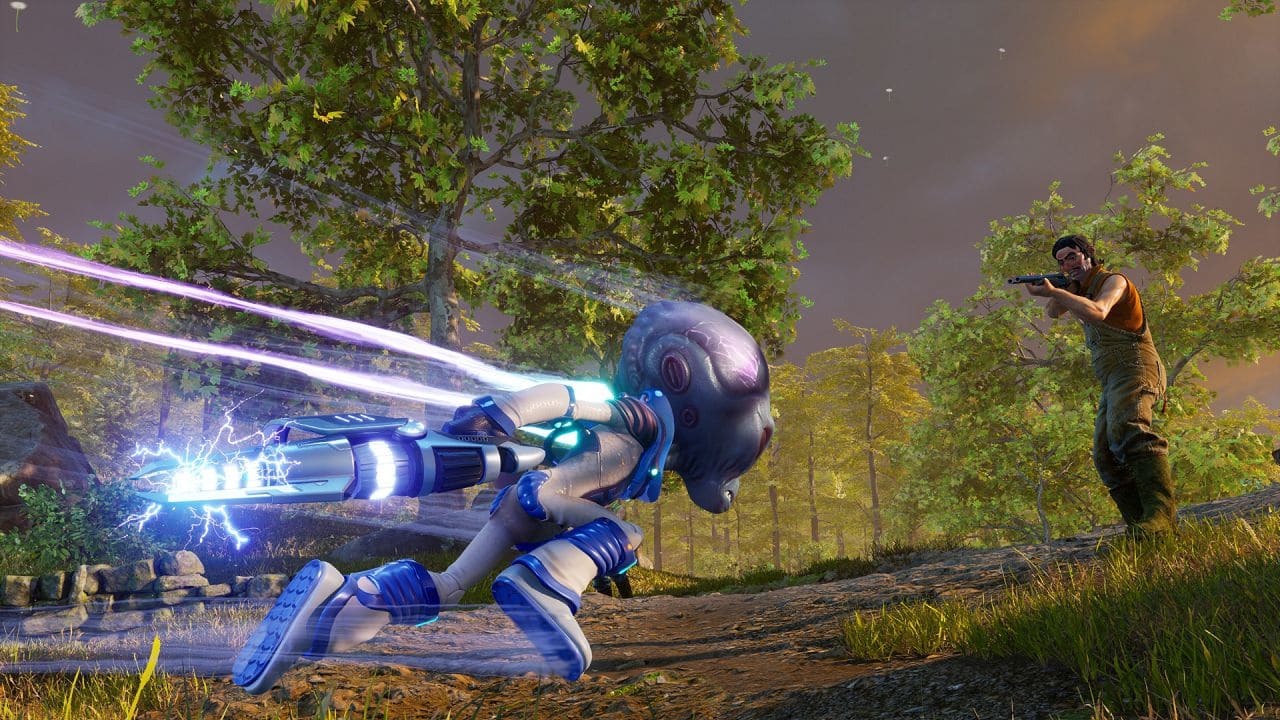 You also have access to a tool called “holobob.” This handy skill lets you scan the minds of humans and assume their appearance. This is very handy because you will need to do a lot of sneaking around to get into restricted areas; walk around reading minds without everyone panicking, and sneak up on targets so you can abduct them. Don’t begrudge all the sneaking—don’t forget what happened to your predecessor, Crypto 136 (you’ll see it in the intro scene).

Sadly, the game is not a large, open ended affair. There are a set number of missions, and some intense combat sessions which provide a good challenge. The challenge level is not a steadily growing line, as there are places that get hard, fast. As such, you may have to grind through certain spots to get your actions and timing just right.

It may only take you less than 10 hours to finish the game, but it can be a real blast getting there. If you have played this game before on other platforms, be forewarned that this is the same game; no real changes to the story or mechanics with the Switch release. 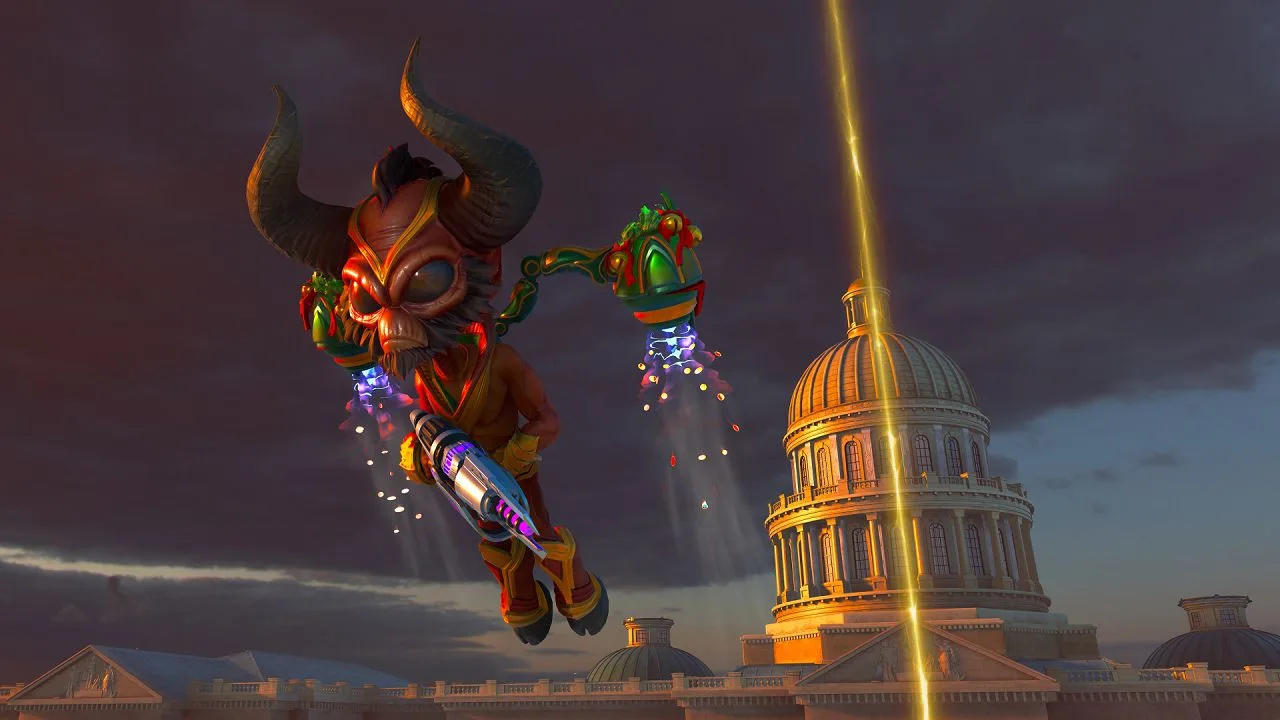 There are some good jokes thrown in for giggles, and the looks and sounds fit the theme nicely. The controls are smooth and not overly complex. There are plenty of skills and equipment to use and upgrade to see just how well you can invade a planet and steal peoples’ brains. The graphics could be a little better in places and the game shows its age (it could’ve used a little polish to clean things up). Finally, the mechanics and resource management don’t overwhelm the sense of whimsy, allowing it to play like a game, not a management exercise.

In short, Destroy All Humans is a bit silly, but it’s fun.

I try to give each game a fair shake regardless of whether it’s new or a port, reboots, etc. So, all by itself, Destroy All Humans for the Nintendo Switch is a romp. It isn’t quite as long as I hoped, but playing a jet pack wearing, Elvis impersonator looking, little green (gray, actually) man from outer space with a Zap-O-Matic and a flying saucer capable of blowing up tanks is a barrel of fun.