Where do you start with a game like Disgaea 5 Complete? The Disgaea series takes a sprinkling of Fire Emblem-like strategy elements and adds a bizarre world full of anime characters. The stand-alone story of each Disgaea game means you can enjoy this latest instalment without having played previous entries. What you will need, though, is a lot of time, a fondness for strategy, and a bit of a sense of humor.

The game revolves around a quirky storyline with plenty of interesting characters. The quest begins with Seraphina, the Princess Overlord of the Gorgeous Netherworld. She’s a spoilt brat but provides much of the game’s humor, particularly compared to main character Killia, a sullen demon who eats noodles during battle. Needless to say, this is a fairly entertaining game. 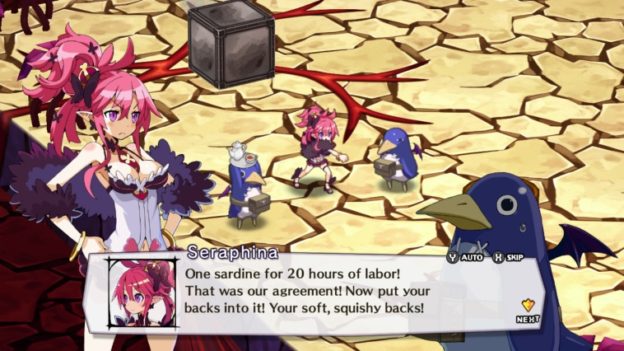 Maybe this why Seraphina is so rich, by underpaying her ‘staff’

Contributing to the flavor of the game are some excellent voice acting and high-quality anime cutscenes. There’s plenty of content here too – this game could very well occupy your life for the foreseeable future, with hundreds of hours of gameplay available to dedicated strategists. The main quest could be accomplished in under 100 hours, but there’s much more to do in this game if you’re so inclined.

A bonus aspect of this game is the ‘Complete’ component of the title. Disgaea 5 was released on other platforms in 2015, and this version comes with all related DLC, adding even more to the amount of content in this game. It’s literally bursting with things to do.

Battles take place on an isometric map in a turn-based approach. In Disgaea, each team coordinates their entire set of moves for that turn before executing, rather than a one-by-one approach. This really adds to that strategic element, giving you the chance to move and rewind before setting your turn in motion. You end up feeling like you have a lot more control over the action. 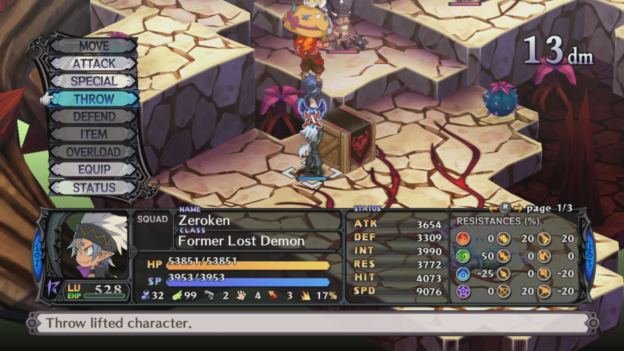 Isometric action on the battlefield

And the game gets straight into that action, after a brief intro. The first few battles are tutorials of sorts – and there’s a lot to learn. There are combos to pull off, as well as moves that allow you to toss your companions further into the mix to reach enemies – or blow them up. You’ll also receive bonus items after battles, and receive most valuable players awards. You can customize team members to the nth degree, with a whole host of demon types available to choose from. It can be a bit overwhelming at first, and isn’t necessarily for everyone. This game does take some dedication and patience. 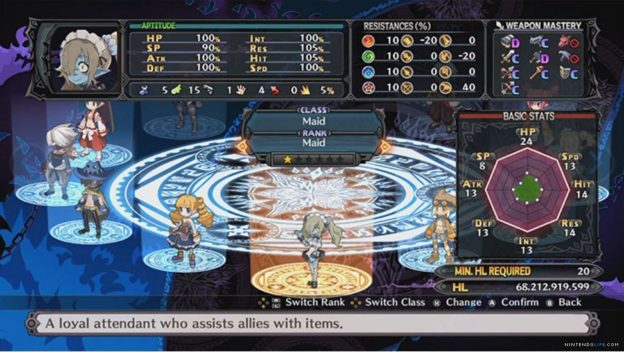 Customize your own team – look at all those stats!

The story and style are also not going to be to everyone’s taste. Where Fire Emblem’s stories are set among epic and grandiose kingdoms fighting with swords and magic, this is a very different take on the strategy RPG genre. Disgaea is set in a colorful world, where demons fight each other for almost any reason. It’s a much more eccentric and jovial adventure, one that doesn’t take itself at all seriously. It’s fun, and funny, but that quirkiness isn’t for everyone. The characters are not always likable either – even Killia’s sullen nature becomes monotonous. And another warning – you will need to do some grinding at some point.

But if anime is your style, this is a visually appealing game, with colorful sprites, excellent animation and generally high-quality graphics used throughout the Netherworld. The music is interesting and a little odd, but actually fits the quirkiness of the game. It’s full of soprano voices with backing guitars – like a rock opera.

Overall, this game is very easy to recommend to tactical RPG fans, particularly if you’re into anime. If you can handle the odd characters and very Japanese-style animation and storyline, and you’re into strategy games, this is definitely one for you. It’s funny for sure, but has a deep level of gameplay that will entertain you for many, many hours.

Disagaea 5 Complete won’t be to everyone’s tastes given it’s odd humor, but there’s plenty of content for strategy/tactical RPG fans in this quality title. If that sounds like you, give this one a go and enjoy the ride!