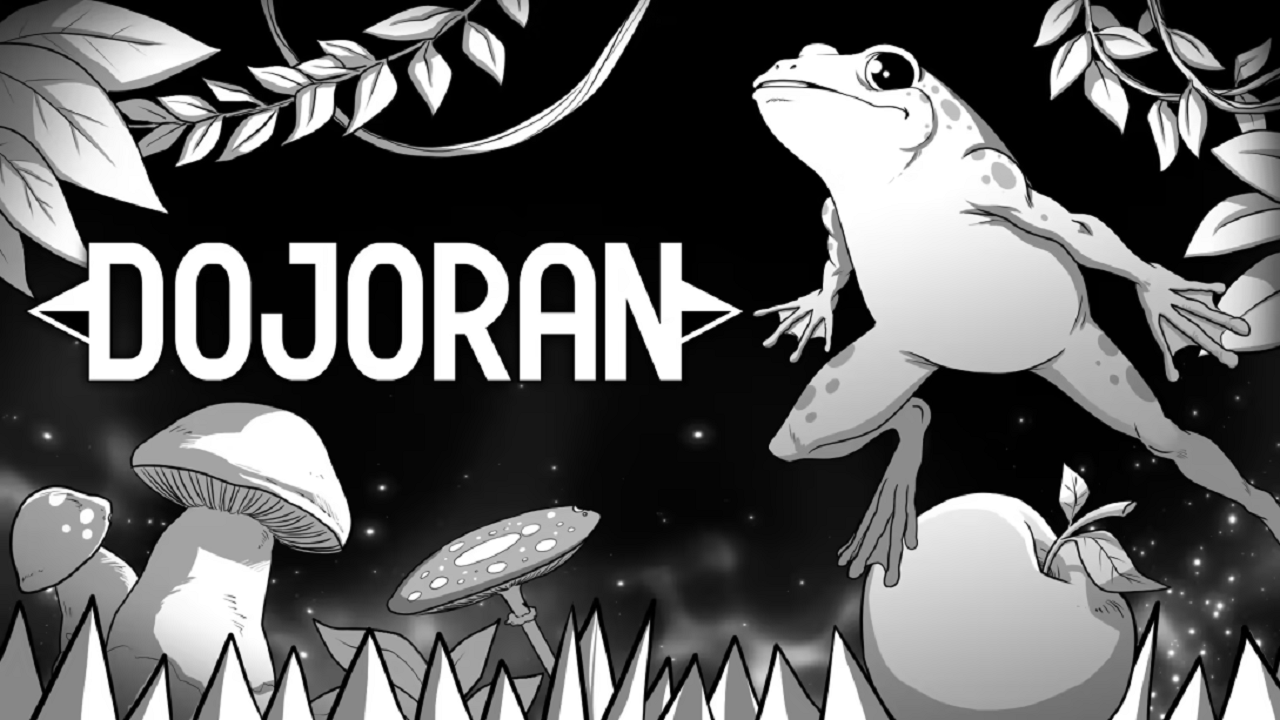 As soon as you begin, Dojoran tells you that life is hard and only gets harder as you get older – thanks for the reminder – and that the world is full of dangers. Especially to frogs. Unlike us, who must do our best through trial and error, frogs in this world go through ninja training. Yes, you read that correctly, ninja training; Incredibly hard ninja training. Using the skills you have learned through your frog ancestors, you begin this training to prepare you for the harsh, harsh world.

Dojoran is a 1-bit platformer developed by Nautlander, using black and white colours only. This visual design choice gives you a nostalgic feel reminiscent of the GameBoy era. For a 1-bit graphic style, the frog sprite that you play as is incredibly charming and full of character. Its arms flail behind them as it runs and looks sad when hurt. Another touch I like is when sitting idle for a certain period, your little frog turns into a ‘Kawarimi log.’ a trick ninjas are known to use as a substitute to avoid fights or danger.

The music used in Dojoran follows suit with a charming, retro track throughout. These tracks don’t change up much and can feel repetitive after a while. Especially when you are stuck on one particular level with the same tune beginning over and over again.

It follows the tried and tested formula of iconic retro platformers such as the Super Mario series. You can move backwards and forwards, jump, and have a button to use your item, and that is it. It’s really all you need to create a successful, easy to pick up, hard to master, addictive video game, and Dojoran achieves all of this. I was genuinely blown away by how tight the controls were and how much I could not put the game down at all. It will be one of my regular pick-up-and-play games for the foreseeable future on upcoming commutes.

Alongside the simplicity of the core controls, there are several mechanics and hazards to make for a very challenging experience. Your frog character can stick to any walls, enabling you to scale them by jumping and sticking as you ascend and avoid any hazards. Speaking of hazards, there are many throughout to truly test your ninja frog. These obstacles include spikes, flying fists, swinging axes and maces, spitting fire, and even Indiana Jones-style rolling boulders at various points. These are all introduced slowly as the game progresses and teach you these new hazards by, well, killing you. Enemies are also scattered throughout the game. However, these pose little to no threat – if anything, they are usually used as a platform to jump on.

Unlike many games in the platform genre, you will never see a game over screen. Instead, you are reminded how many times you have died, with a death counter, alongside a timer of your profile’s entire playtime. At first, the death counter would tease and tell me how bad I was at this game, but from around the 400-death mark onwards, I just stopped worrying so much about it! With these constant statistics on display, I can see Dojoran being a speedrunner’s dream. I, for one, can see myself returning many times to lower that death count or shorten that completion time.

You have three different items that you can collect and use in each level. The first and most common is the apple. Your frog swallows these and will hold them in its mouth until you use the item. Spitting the apple can either give you a small boost in your jump or be used as a platform as a double jump. The apple makes for some interesting level design, requiring you to use it at the correct time. I found, at times, I used it too early on a jump that I wasn’t confident with making. Meaning I would either need to try and backtrack or sacrifice another poor froggy’s life to make that death count 401. The next is a fly. By catching the fly, it allows you to take a hit without losing your life. It is a similar mechanic to Mario’s mushroom but has no growth spurt. The final is a large coin. I’m yet to fully understand what the coins in this game are for besides another statistic to chase.

Dojoran is an incredibly well-made, simple video game that anyone can enjoy. I had a great experience and will return to it often, each occasion trying to lower completion time and death count. If you have a spare $4.99, I highly recommend this game.

Dojoran is an incredibly well-made, simple video game that anyone can enjoy. I had a great experience and will return to it often, each occasion trying to lower completion time and death count. If you have a spare $4.99, I highly recommend this game.

I've had an unhealthy Pokémon addiction since I was five. My sister gave me her Pokémon Yellow cartridge after losing interest (how dare she). Since then, my addiction's grown into a love for all things Nintendo. My recent qualification in journalism has helped me begin a career in writing; what better subject matter to write about than something you have a passion for? Quiz me on anything Pokémon, I dare you!
Comments
Submit a Comment