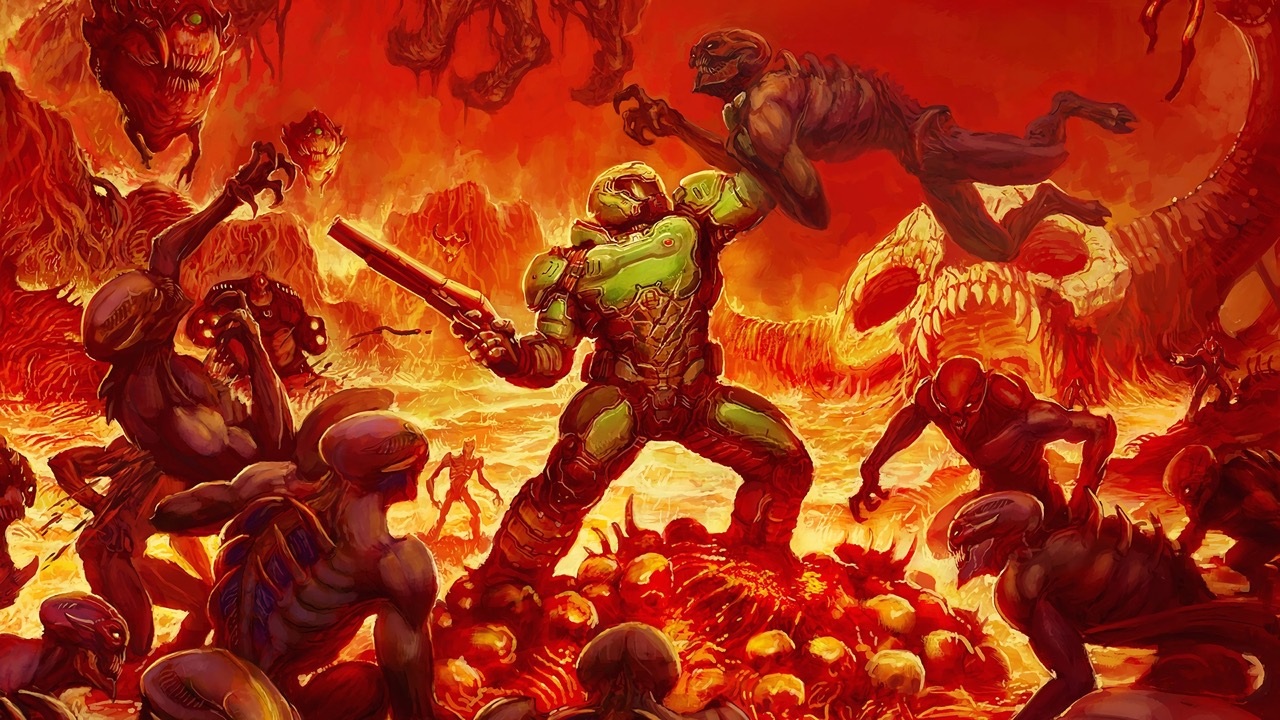 DOOM is back on a Nintendo system for the first time since 1997 when DOOM 64 released. That’s pretty wild that it’s been 20 years! I was never a big fan of DOOM growing up, but I can appreciate how it paved the way for one of my favorite video game series, Quake. I always loved the fast-paced gameplay of Quake, which definitely inherits a lot from DOOM, but I always enjoyed the art style and gameplay in the former more. Despite not being a Quake game, I really had fun with DOOM on the Nintendo Switch.

The storyline in this latest DOOM entry is decent—it isn’t overly complex nor too simplistic. The progression and pacing in the game’s campaign is very well done and feels a lot like Metroid Prime actually (Metroid Prime is still far superior in my opinion). New weapons and armor upgrades are cleverly dispersed throughout the game. There are plenty of hidden areas and secrets to find as well. The boss battles, while few, were really fun to tackle. They were never too difficult but I only played on ‘Hurt Me Plenty’ difficulty—the game’s equivalent to a ‘Normal’ difficulty setting. Players will gain new abilities such as a double jump and even find context-specific items like ‘Haste’ and ‘Quad Damage’ which increase your speed for a limited time and increase your damage respectively. Now you may have already played DOOM on another platform so let’s dive into the core differences on the Nintendo Switch version. 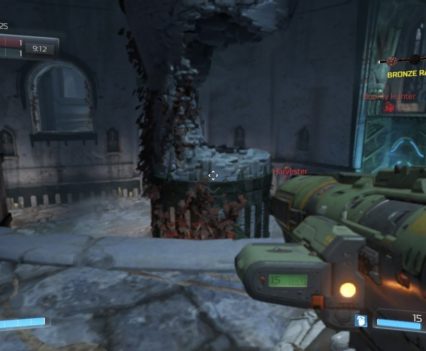 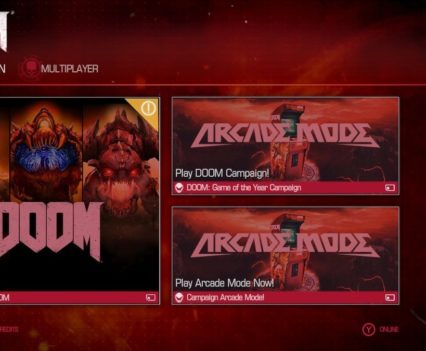 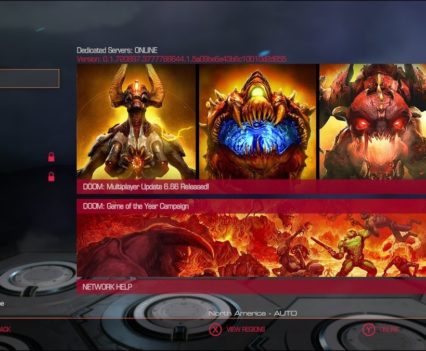 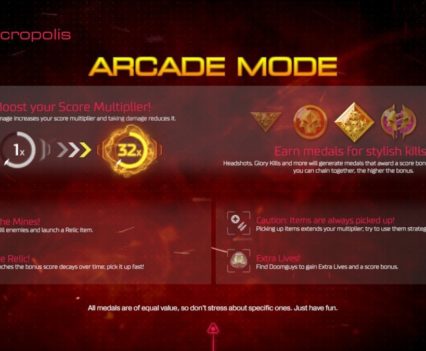 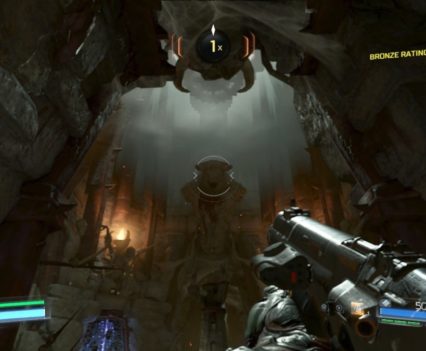 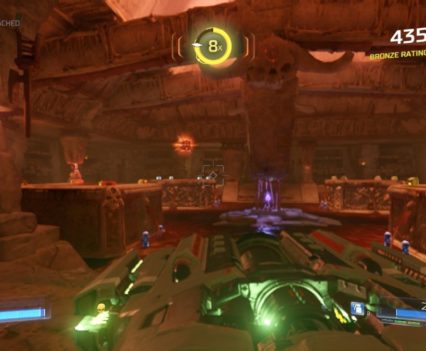 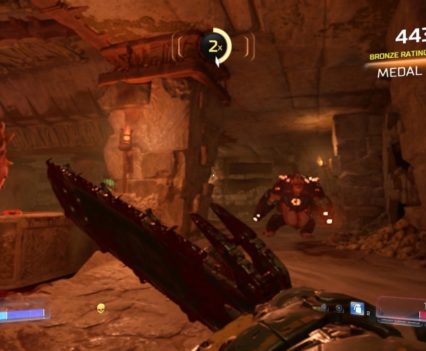 First off, the game contains all of the downloadable content for multiplayer and any updates the game has received to this point including Arcade Mode. The main feature it doesn’t have is the ability to create your own maps via the SnapMap feature. Other than that, it contains all the multiplayer modes you’d come to expect. Those who have played DOOM before on a more powerful home console or PC may be a bit disappointed in the visual presentation. The game, even in handheld mode, is a bit blurry. Granted, the game employs blur effects quite regularly throughout the game including when the player is being attacked. This is more just in terms of resolution and visual fidelity. It doesn’t have a lot of jagged edges to the environments, it just looks too ‘soft’ if that makes sense. One thing that helped me was going into the Video Settings and turning off ‘Motion Blur’ and ‘Chromatic Aberration.’ Both of those settings, to me, caused more harm than good. Docked mode exhibited similar ‘blurring’ and I also didn’t notice any resolution enhancements that Switch games usually have in docked mode. There are still plenty of nice lighting effects, but the overall presentation is a bit mixed. The game is still very impressive to be sure compared to other games on the Switch, and even the lower 30 frames per second mark still allows for fast and frantic gameplay. Also, I would rather sacrifice visual fidelity for a higher frame rate and that appears to be what Bethesda and id Software went for with DOOM on the Switch.

The multiplayer and replayability in DOOM for the Nintendo Switch are probably its biggest strengths. There are a ton of modes in multiplayer and even various challenges to tackle. Players can also level up and unlock various upgrades. There is even a Practice Mode before you go online to get used to the multiplayer modes complete with bots (man, I love seeing bots in multiplayer modes—it’s been too long). I did this mode quite a bit before going online and it helped out tremendously. When you combine the campaign, the Arcade Mode, and the multiplayer modes, you really have an awesome package. The Arcade Mode was particularly fun as you can choose which area of the campaign you want to go to and what difficulty. There are even new multipliers and combos you can execute. There are a lot of scores and bonuses that fly across the screen in this mode so be ready for a crazy, albeit fun, time.

DOOM definitely isn’t for everyone—especially those who aren’t old enough to be playing M-rated video games (obviously). But for this old Quake player, there was quite a bit I enjoyed about DOOM that I think any shooter fan can get behind. If you’re looking for a change of pace on the Switch and have been searching for a shooter game with amazing multiplayer options, I’d definitely recommend giving DOOM a try—hopefully they’ll release a demo in the future for those on the fence.

DOOM definitely isn’t for everyone—especially those who aren’t old enough to be playing M-rated video games (obviously). But for this old Quake player, there was quite a bit I enjoyed about DOOM that I think any shooter fan can get behind. If you’re looking for a change of pace on the Switch and have been searching for a shooter game with amazing multiplayer options, I’d definitely recommend giving DOOM a try—hopefully they’ll release a demo in the future for those on the fence.