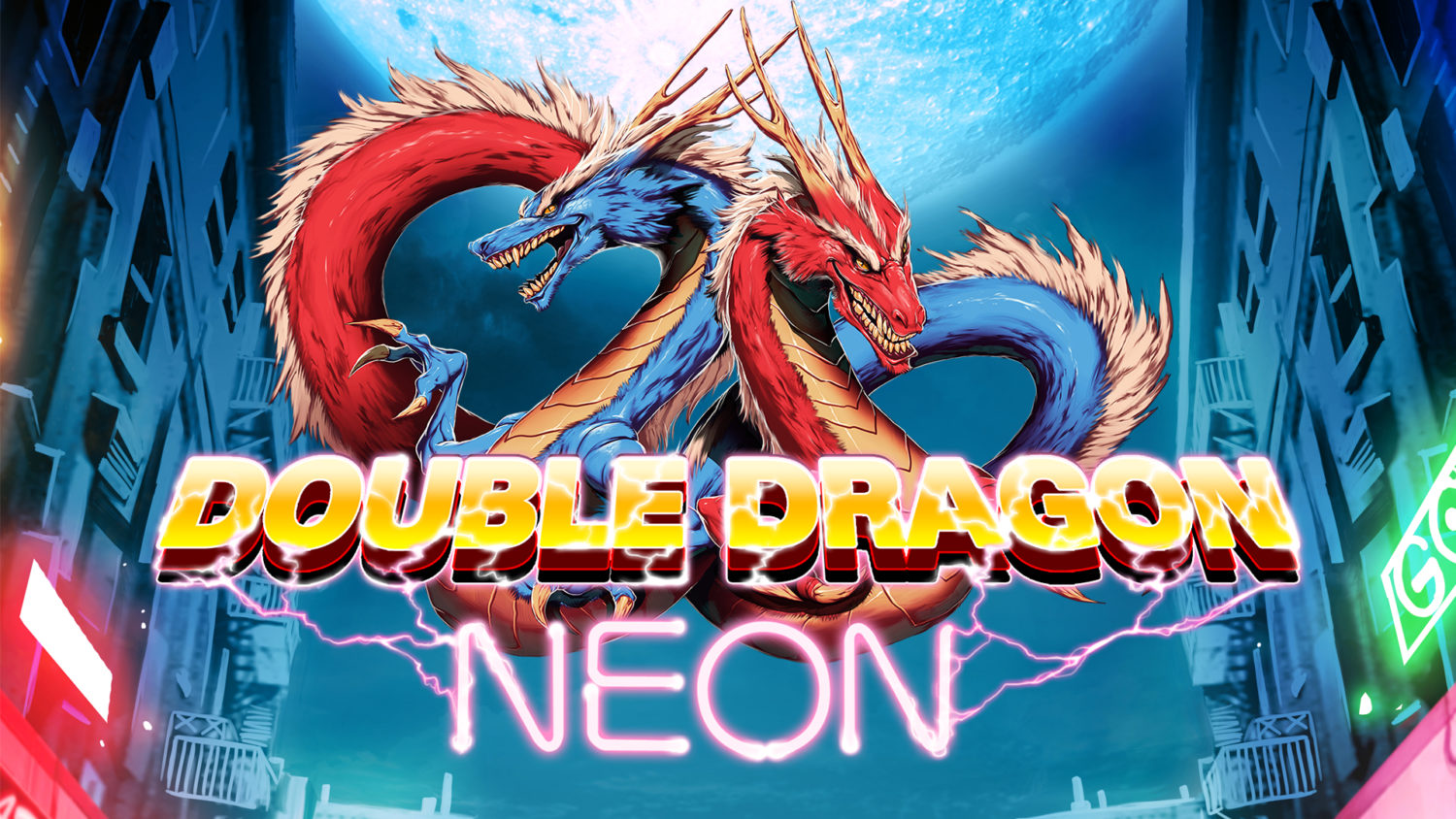 By Harrison Milfeld  •  1 year ago

When Double Dragon Neon was originally released in 2012, the WayForward-developed reboot of the classic beat ‘em up was meant to give the series a much-needed boost of western feel and influences. In addition, Double Dragon creator Yoshihisa Kishimoto helped oversee elements of this new take on the classic, such as the mechanics or the designs of brothers Billy and Jimmy Lee. Since then, many new attempts at refining the beat ‘em up genre have come and gone, with quite a few—such as River City Girls and Streets of Rage 4—breathing some new life. So, does Double Dragon Neon still stand toe-to-toe with those that have come after it? The short answer: Yes. And, quite frankly, this suped-up reboot still packs a good punch or two eight years after its initial release.

To put it simply, Double Dragon Neon is a re-imagining of the original arcade classic with various bells and whistles and twists and turns added for good measure. 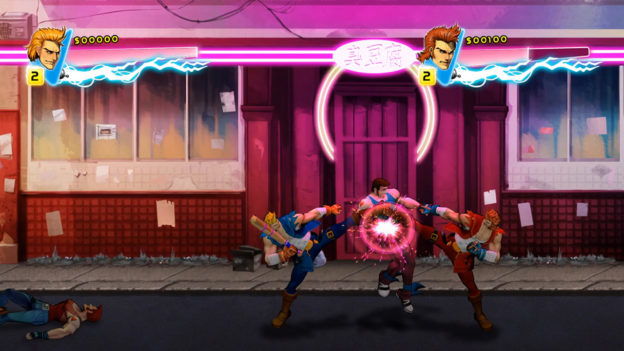 From the get-go, the scenario is rather familiar to those who grew up playing Double Dragon in either the arcade or on the NES. The Shadow Warriors kidnap Marian, which then leads you into the city streets as you punch and kick your way through hordes of foes before your own thumbs tire out. But, it is suddenly revealed that said gang is controlled by a menacing lich called Skullmageddon. From the rough and tough city streets, you are soon thrust into outer space and other new locales that put a fresh spin on the series’ formula. One of the more fun and memorable set pieces has you fighting enemies inside an air lock while you must carefully avoid being sucked into the vacuum of space. As a reboot of a classic beat ‘em up, having developer WayForward lean heavily into the silly and absurd (whether it’s the characters or settings) is a welcome addition that invigorates the cheesiness of the entire journey. 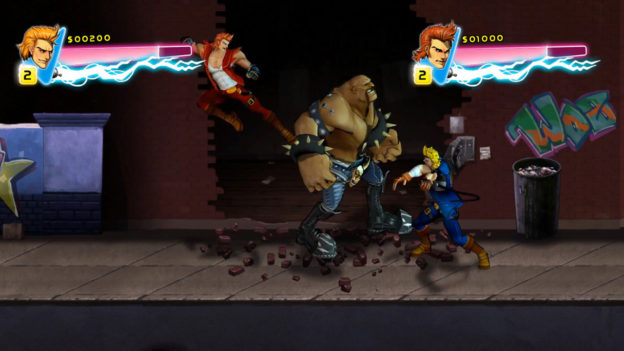 Along with the changes to the scenery and mood, Double Dragon Neon also introduces some new options in how you engage in fisticuffs with various henchmen. The first addition is the ability to evade. If you avoid an enemy attack at the last possible second, either Billy or Jimmy will start to briefly glow red, thus activating a Gleam boost that grants double damage. While at times easy to pull off, the Gleam ability is highly recommended if you find yourself cornered by more than two enemies. A quick roll or two from an incoming punch or the swing of a bat can mean the difference in not losing that last bit of precious health. However, I did find myself failing to execute a timely Gleam boost only to see either Billy or Jimmy get knocked hard to the ground.

Now, if performing the Gleam ability becomes troublesome if you are in a bind, then there are the added mixtapes you can collect. These mixtapes, which are spread throughout each level or gathered from fallen enemies, give you two forms of bonuses that can be equipped simultaneously at the pause menu. One set of mixtapes allows you to summon a powerful attack, provided you have enough consumable energy to use. Meanwhile, the other set boosts your overall stats coupled with certain perks. Finding multiple versions of the same mixtape will allow you to further increase the strength of the power boost, so don’t hesitate when an extra copy lands at your feet. Aside from that, you can also upgrade your mixtapes by spending the mythical metal Mythril at Tapesmith shops in various stages. The only way to collect Mythril, though, is by defeating bosses. Luckily, you can access past stages to farm for more of the precious metal if you so desire. Regardless, finding the right combination of mixtapes for your disposal is key when dealing with clearing out a screen full of enemies small or large, or the equally ridiculous (but fun) looking bosses. 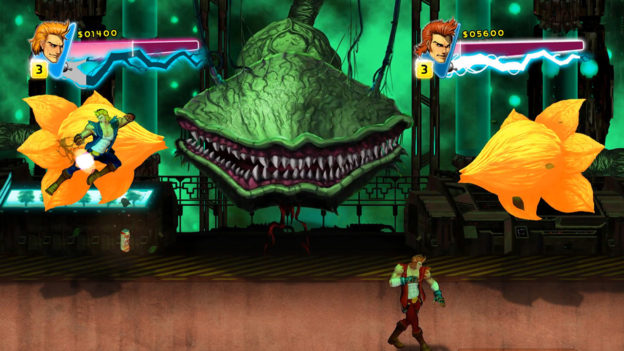 In terms of visuals, Double Dragon Neon doesn’t skirt from the “Neon” in its title. Graphically, it certainly won’t be anything new to some, but it fits so well here in the Double Dragon world. The game is infused with bright and pulsating colors that pop for their own aesthetic while easily echoing off that ’80s vibe. Speaking of the 1980s, the music of Double Dragon Neon lends well to both its choice of color and the environments you journey through. Frequent WayForward composer Jake Kaufman doesn’t lose a step in crafting this hard-hitting, rock solid, and sometimes bouncy soundtrack. Overall, visually and musically, it should be no surprise to anyone playing that the theming here works so well together. 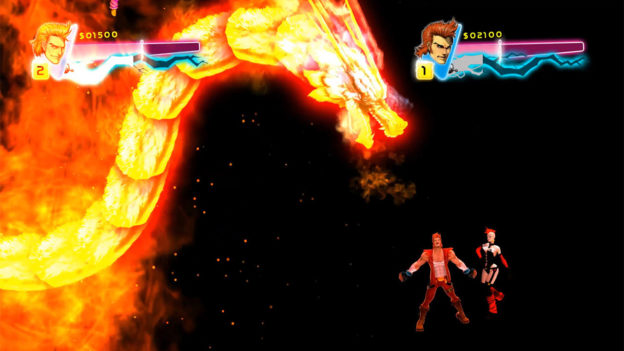 While the overall package is easy to control and manage as you whip through the game’s 10 stages, there are a few nagging annoyances. Whether you are playing solo or with a friend, the harsh difficulty spike late in the game can lead to some unfortunate continues that send you back to the beginning of a long level. It’s not unforgiving per se, but does require you to mash your heavy attacks as if there is no tomorrow. You can purchase extra lives at the shops within certain levels, but there is a cap on purchasing them. However, aside from a fresh, bright coat of paint, new combo abilities, and an added dose of wackiness, Double Dragon Neon doesn’t offer too much besides a few extra playthroughs on a higher difficulty or co-op with a friend.

In the end, Double Dragon Neon is yet another well-tuned and well-oiled retro beat ‘em up for the Switch that still holds up eight years later. While it might not best its contemporaries in the genre today, this reboot of an arcade beat ‘em up classic does well enough to impress veterans and newcomers alike.

Just as it was when originally released in 2012, Double Dragon Neon is still a well-made and well-thought out reboot of the arcade classic that will certainly please veterans and newcomers to Billy and Jimmy Lee’s adventures.