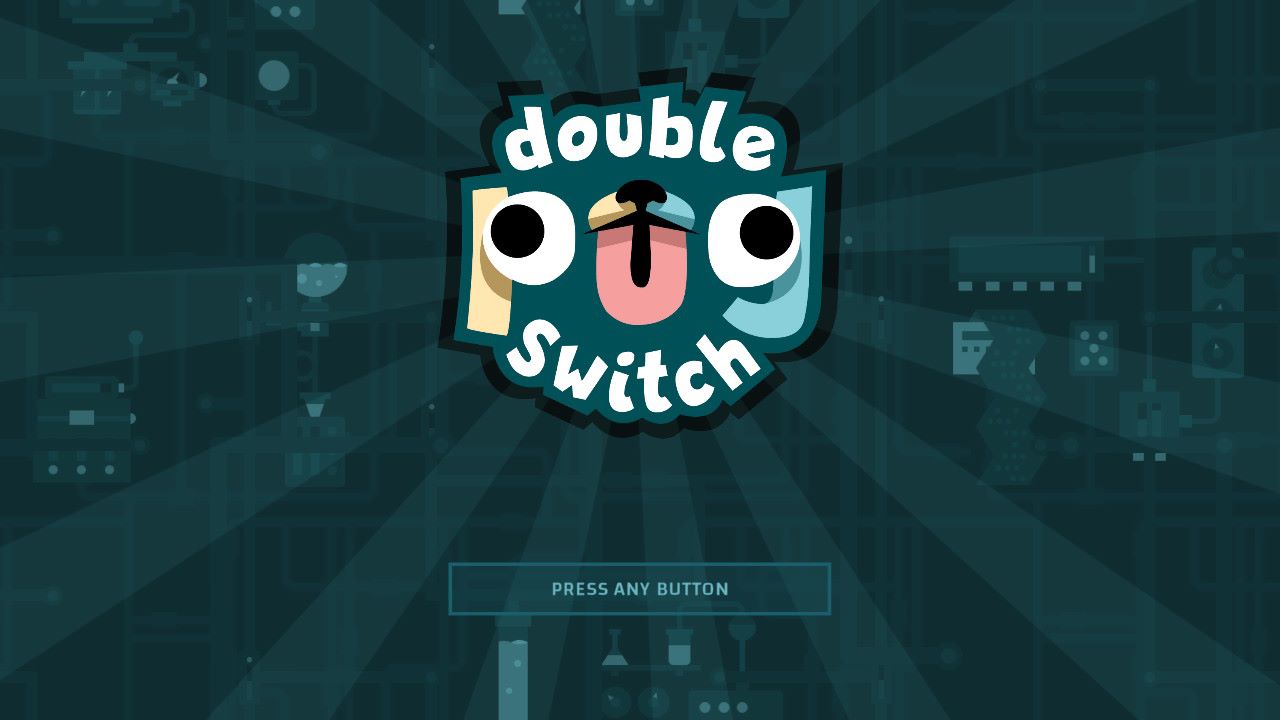 Double Pug Switch is a side-scrolling platformer game in which you control Otis the Pug, switching between dimensions and avoiding spikes and other hazards in each level. This game is frustratingly challenging. Believe it or not, that was the main reason I enjoyed this game. 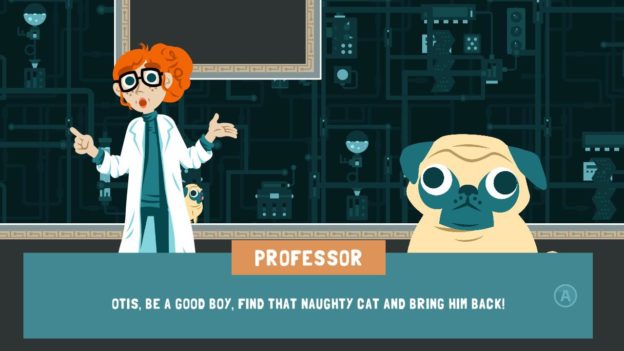 The game begins with Otis, a human scientist, and Whiskers the cat inside a lab. Whiskers, being a cat, knocks over a couple of test tubes that create a portal. Whiskers and Otis gets sucked in. It’s up to Otis to switch between dimensions to find Whiskers, so the two of them get back home.

The gameplay is simple, which is certainly a plus for this game. All you need to do is know two buttons: A to jump and B to switch dimensions. It doesn’t sound hard, but each level is tight with the jumps with spikes just about everywhere. You can tap A to make a small jump or hold A down longer to jump higher and farther.

You need to decide which is the right option and quickly because guess what? Otis doesn’t stop. 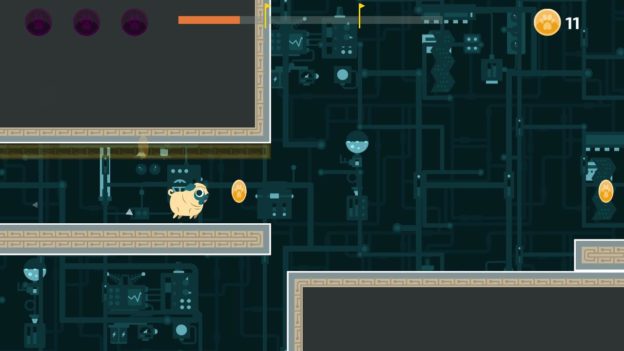 You don’t control Otis. Once the level starts, he begins running. You can’t even slow him down. Needless to say, you don’t know what obstacles lay ahead, so there’s not much time to think about what to do. You need to make a decision fast. Can I make a big jump and bypass the next platform completely? Or do I need to make a small jump to avoid the spikes on the ceiling?

Not to mention, there are two different dimensions. You can see all platforms and spikes, but some are transparent. This means you need to switch dimensions for it to physically appear for Otis to land. Oftentimes, you need to jump on a platform, jump and change dimensions in midair, land on the new platform, and rinse and repeat. 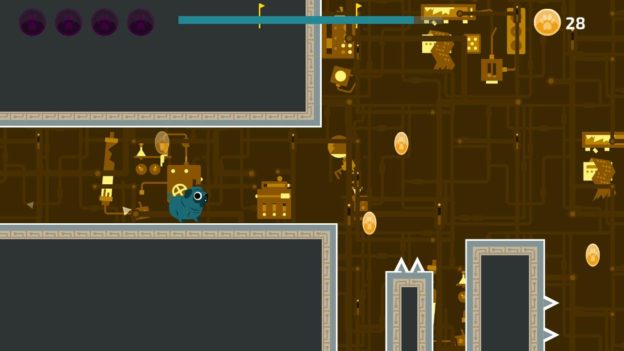 You’re going to die a lot. It will get to the point where you just want to make it that much further in the level so you can see what’s possibly coming up next so you can mentally prepare for it.

Each level is like trial and error as you make mistakes, die, and reevaluate how to overcome that obstacle. On some, you’ll figure out what you need to do and get it right away. On others, you’ll know when you need to do but fail over and over again because you need precision jumps.

This set up is, in part, why it’s frustratingly challenging. Your muscle memory needs to be strong with this one. Normally, though, this is the type of game I would rage quit, but I found myself constantly wanting to “try one more time” before putting down the game. The reason for this (and why I respect the challenge) is because the game knows it’s difficult and frustrating. 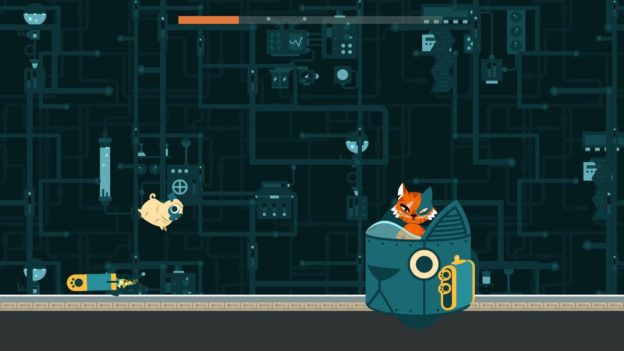 There are eight areas of the game, each with eight levels, the final one being a quick boss battle. These boss battles play the same as the other levels where you dodge objects from the enemy and more or less just need to survive until the end.

The game is self-aware that you might be stuck on a level for a long time. Without dying, each level is probably about 30-seconds to a minute long. So, if you’re truly stuck, you’ll only be stuck on it for ten minutes or so, not an hour. 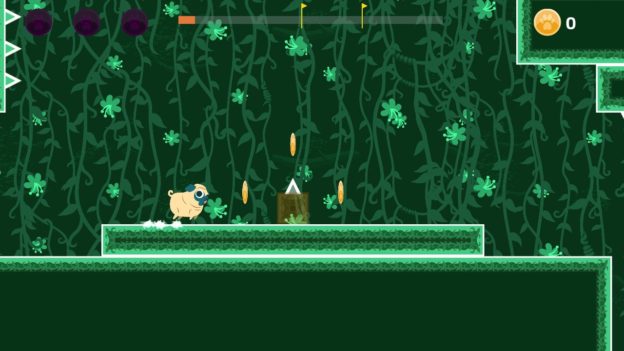 The game autosaves everything you do, so when you reach that checkpoint (and trust me, it feels good to reach a checkpoint when you’ve been stuck for a while), each time you die, you’ll start at the checkpoint again.

I guess my only complaint would be that there isn’t too much variety between the levels other than the color palettes. But then again, if anything else was added, the game might be almost too hard. Each level was set up differently, though, so it was able to keep my attention. 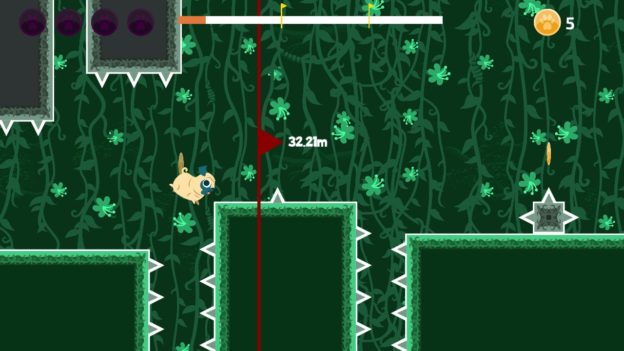 Double Pug Switch is a challenging platformer, short but sweet, where you’ll find yourself saying, “just one more level!” The controls are easy to learn and hold a fun challenge that will keep you addicted. Multiple checkpoints are a saving grace.

Double Pug Switch is a challenging platformer, short but sweet, where you’ll find yourself saying, “just one more level!” The controls are easy to learn and hold a fun challenge that will keep you addicted. Multiple checkpoints are a saving grace.