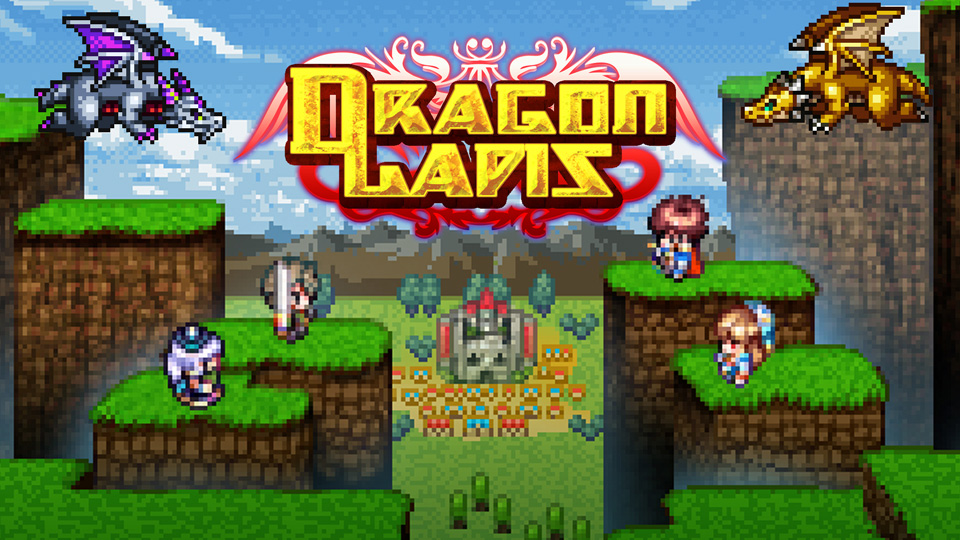 It’s somewhat odd to me, playing a KEMCO game on the Nintendo 3DS. Although they got their start in the mid-’80s as a developer of games for the NES, I know the company from their slew of recent titles released for the iPhone. Most are designed to bring the classic Nintendo JRPG feel to mobile devices, and with Dragon Lapis I’m now playing one on an actual Nintendo device. But does this retro approach work on a system that can give you so much more?

The short answer is yes. The long answer is also yes, but with a couple important conditions. 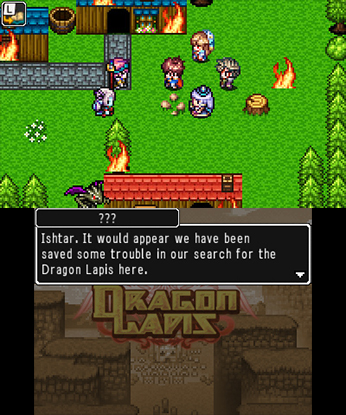 Dragon Lapis tells the story of Lucas, a royal knight with an unknown legacy that fits right into the typical JRPG tropes. He’s the descendant of a legendary hero who sealed away gold and silver dragons caught in a battle that would have destroyed the land. Lucas finds this out when the dragons reawaken (now in human form), and he teams with Iria, the Gold Dragon, to prevent the Silver Dragon from completing her conquest. But can Iria be trusted? And who’s this mysterious figure who keeps showing up to demand the dragon lapis?

That’s the quest, you see. Iria states that only by gathering the seven hidden Dragon Lapis can our heroic group of (mostly) young heroes defeat the Silver Dragon. Each Lapis makes Lucas and Iria more powerful, and Iria derives a somewhat alarming sense of glee from this. The two of them team up with a couple other likable would-be heroes, and the group has some genuinely funny dialogue throughout their adventure. You’ve been through all of this before, but that’s kind of the point of a retro title, right? 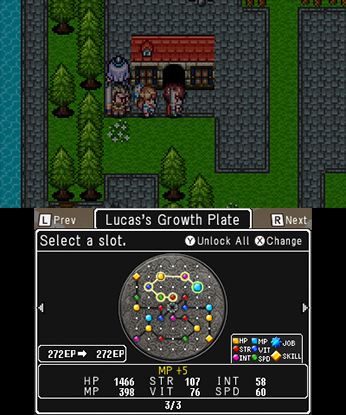 As with most retro JRPG games, you can expect a lot of random encounters in the dungeons and overworld, as well as typical turn-based battles (attack, defend, use skills or use items) that allow you to position your party members for better attacks and defense. You don’t want your poorly defended healers in the front, for example.

Dragon Lapis adds a new wrinkle to the system, however, by funneling most character advancement through growth plates found and purchased throughout the game. Characters can equip these plates to master the skills contained within, thereby increasing their job rank. You can choose to focus on one or two jobs and rank up quickly by using the appropriate growth plates, or you can create a more diverse character by shifting jobs and using a wider variety of plates. You’ll never be at a shortage for growth plates to use, but some of the better ones are tricky to obtain.

Those are the basics to the game’s story and combat system, and it’s because they’re so simple and familiar that Dragon Lapis works as well as it does. Modern JRPGs are huge affairs with complex battle systems and branching storylines that can take over a hundred hours to master and complete. And that’s great. I love it. But I also loved how Dragon Lapis zipped along through its story and combat system as if it wasn’t interested in wasting any of my time. Battles are quick and breezy, and the story pushes you from plot point to plot point with precision. Not even the sidequests drag you down. 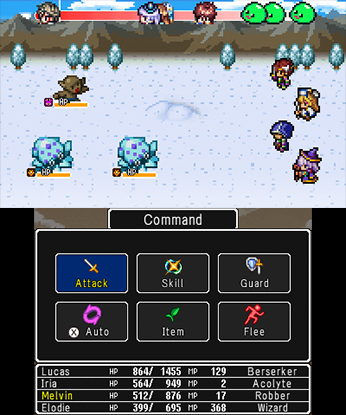 Unfortunately, this also means the game is too easy. You’ll find yourself overpowering enemies quickly, and that never really lets up as you progress. This is fine for those looking to push through the story, but it’ll likely bore those looking for a challenge. Unlocking new jobs and powers isn’t very rewarding if you didn’t really need them in order to advance. Perhaps this is a carry-over from Dragon Lapis’ mobile roots, where gamers tend to play in short bursts instead of dedicating longer periods to learning and mastering the nuances.

Either way, if your memories of JRPGs for the NES and GameBoy mostly concern their degree of difficulty, that’s not a concern with Dragon Lapis.

With its speedy gameplay, colorful 8-bit graphics and chiptune music from composer Ryuji Sasai, Dragon Lapis perfectly fits into its niche. It’s not meant to be a title that’ll take over your summer, but is instead great to play on car trips or when your Switch is being used by another family member. You’re not likely to enjoy it if you’re not already a fan of JRPGs, but those within its target audience will find it a pleasant adventure to take…even it feels like one you’ve taken multiple times before.