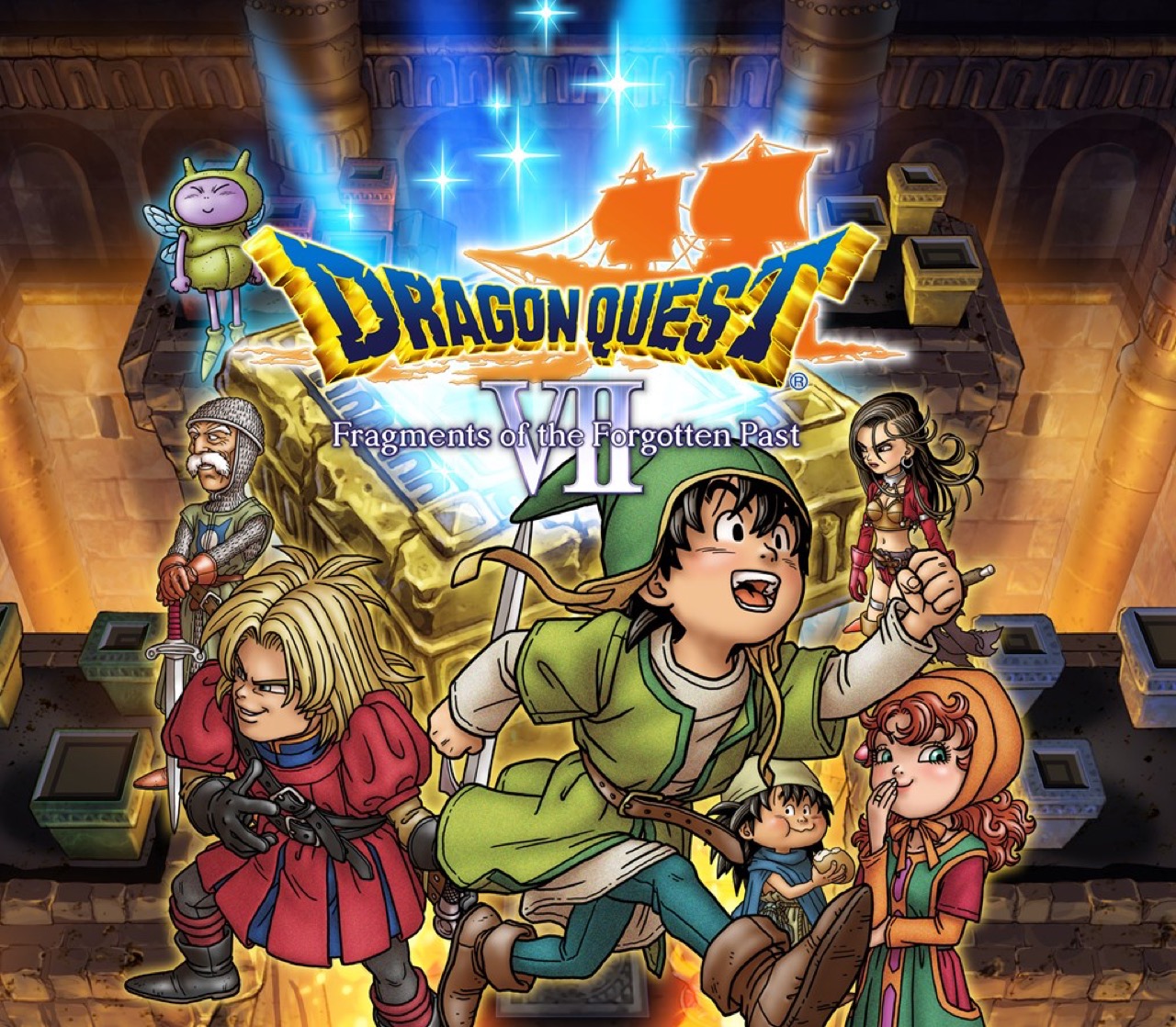 Dragon Quest VII is a long game, and I mean long.  HowLongToBeat.com clocks Dragon Quest VII at around 100 hours, not including side-quests.  An hour passed until I encountered my first monster battle.  That is a ludicrous amount of time for any game, regardless of length.  The game cannot even make an excuse for tutorials, as there are none; only dialogue after dialogue, followed by hauling our hero (“Pipo” in my case) from one end of the island to another.  Interestingly enough, the 3DS port had already streamlined the intro sequence over the PS1 original.  Only until you reach the Shrine of Mysteries, does the action begin to pick up.

Once you take your first step into the past, Dragon Quest VII: Fragments of the Forgotten Past begins to show why it’s a beloved classic.  Cleverly written lines, accompanied by Akira Toriyama’s infamous designs, reveal a charming and fun world.  Thanks to the improvements of the 3DS version, Toriyama’s designs really pop.  I enjoyed listening to every character I encountered; even the villains.  If Dragon Quest VII was a TV series, each island feels like its own episode; with each island having its own self-contained story arc, and I was invested in each one.

The visual update brought into the 3DS port is welcome in all aspects of Dragon Quest VII, but it is especially appreciated in the battle screen.  Battle in the PS1 version was menu driven, with only the monster sprites on screen.  With the 3DS comes the full view of both friend and foe, along with revamped attack, spell, and item animations.  JRPG’s have gone through a lot of aesthetic changes over the past sixteen years, so more modern players will feel more at home playing Fragments over the PS1 original.  For those itching to use that 3D slider bar, DQVII accommodates.  Though the 3D is done beautifully, this is a JRPG, and staring at the battle screen too long feels like a strain.

Don’t be overwhelmed by the battle menu.  Mechanics like attacking, defending, and magic are straightforward.  On the other hand, Fractured demands a bit more strategy with each turn.  Enemies can be arranged individually or appear in a group.  When attacking groups, the target is random, so careful strategy is needed.  There are also certain weapons and spells useful for attacking groups, or even the whole field.  Turn order is not only dependent on agility, but what action is performed.  Mistiming crucial actions is a quick way for your fight to turn ugly. 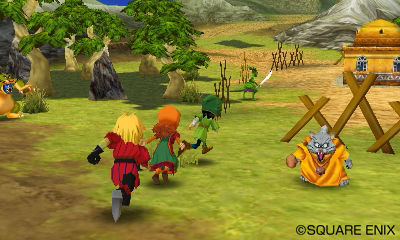 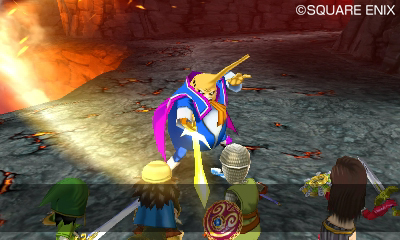 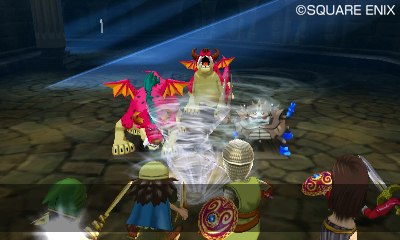 JRPG’s have also gone through a lot of mechanical changes since the bygone era of the first Playstation, so players will have to be ready to step into an older, more challenging, experience.  For example, the penalty for game over is steep.  Not only is the party kicked back to the last save point (albeit with their gained experience and items intact), but their banked money is cut in half, and all party members save for the hero are still dead.  To add insult to injury, unless you have the rare Yggdrasil Leaf, you will have to pay the church to resurrect them.  Wipe too many times, and you can easily find yourself short of funds.  Dragon Quest VII is the only JRPG in which I find myself constantly emptying my pockets; something that (outside of paying for resurrections) other JRPG’s should take a page from.

Square-Enix’s (Enix at the time) seventh installment is a lengthy play, but grinding (thus far) is not a factor.  Simply by traveling from point A to point B, players will be able to keep up with challenges the game presents them, only occasionally going out of their way to knock monsters around.  The most trouble the game has given me was a section in which our heroes have their spells and abilities stripped from them for a period of time.  In my years of gaming, I have never come across a title in which stripping players of spells or equipment mid-game has been enjoyable; Dragon Quest VII is no exception.  Difficulty aside, mashing only the attack button battle after battle turned DQVII from an interesting challenge to a monotonous grind.

After twenty-five hours of journeying, DQVII finally grants you the ability that’s been touted on all of the adverts: Class Changes.  Changing classes not only rearranges your stats, but allows you to gain new spells and abilities, prompting players to plan ahead.  Mastering the basic classes not only net players abilities, but will open up more advanced and powerful classes.  The class system breathes even more life to an already fresh system.  Since I had already learned everything the basic classes had to offer ten hours prior, there is a huge gap between introducing new battle mechanics. 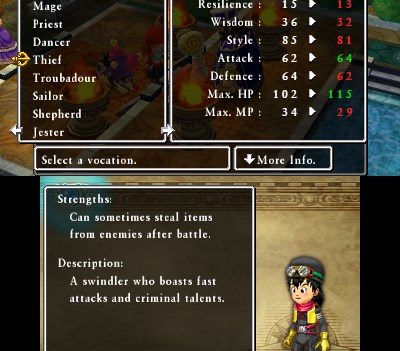 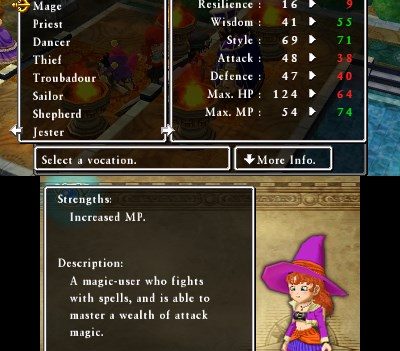 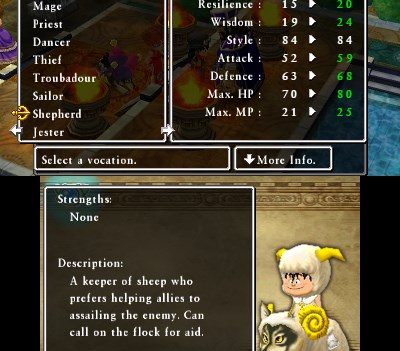 Dragon Quest VII is a port of a classic, which means it will come with a lot of the original’s baggage: incredibly long, demanding battle system, and throwing you into the fire.  But the visual upgrade certainly does the artwork a lot of favors.  The 3DS version also streamlines the intro, and job class mastery, making the game more forgiving and adapted to modern audiences. Dragon Quest purists may take issue with these changes, but JRPG fans in general will find a good purchase picking up Fragments of the Forgotten Past.