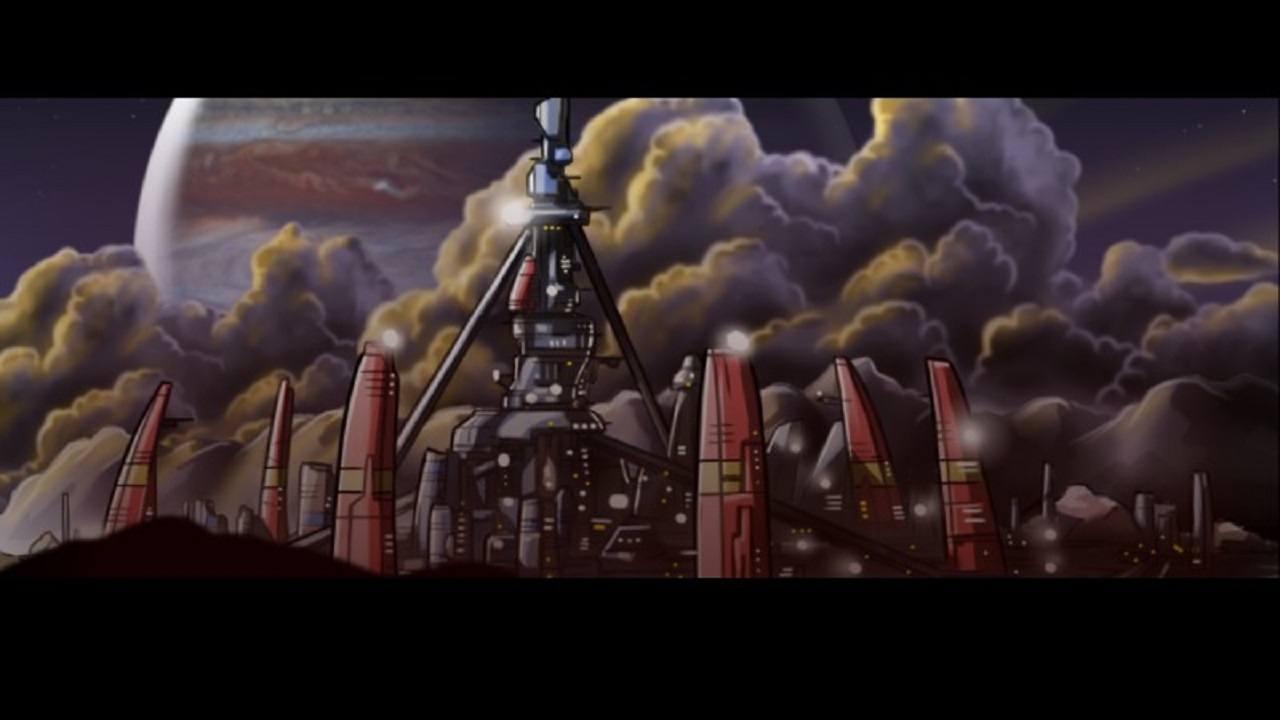 This arcade style run and gun shooter caught me by surprise.  Dual Core has a definite arcade spirit, but with the depth and refinements you’d expect from a modern release.  This sci-fi shooter is a treat, especially for multiplayer fans.

In the future, security drones are discovering the unsettling status of a human colony while trying to advance past ever growing threats to themselves.  The story isn’t just there for setup purposes, as it advances throughout to give the game a nice sense of adventure. 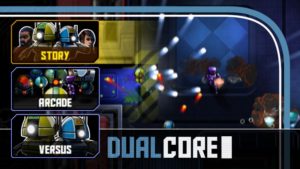 Dual Core has 3 modes, with a “strong focus on local co-op multiplayer” for all.  No worries though as you’re given an AI controlled helper droid (Corby) even when playing solo.  Besides the aforementioned story mode, there’s also  arcade and versus.  Arcade is just what you’d expect, ditching the plot in favor of never ending waves of enemies as you aim for a high score.  Versus. mode pits you in an arena against your friends or computer controlled characters.  Both are interesting little extras that add some real value to the game. 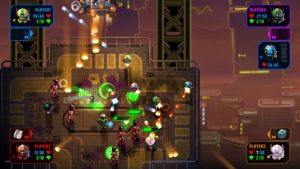 We’ve really enjoyed the light RPG aspects Dual Core brings to the table, which includes leveling up your weapons, health, and regeneration ability.  You can even improve the stats of your helper droid.  Powerups include even more droids, and it can be a real thrill to flood the screen with helpers.  Just be advised that, while  an asset in wide open areas, they tend to go to waste in narrow hallways.  Not the brightest lot, they’ll get stuck in doorways and such, in frustrating, though somewhat comical, fashion. 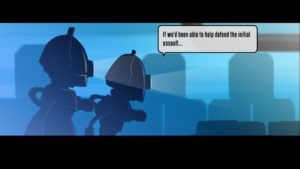 Dual Core is a refreshingly vibrant game, that displays attention to detail.  Its backgrounds and cutscenes show off some very impressive artwork.  Despite the intensity of the action, we never noticed slowdown, even when the action covered the screen from top to bottom with all sorts of characters and fire power!  The soundtrack alternates from enigmatic to intensive and beyond.  The variety makes for an entertaining listen, and the sound effects (like falling rain or distant explosions) help bring the game to life as it were. 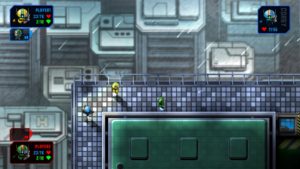 The game controls well, with a wide variety of setups supported.  It’s fun to see your droids weave about responsively to your commands, quickly rotating and firing in any direction.  There’s even a bit of motion control when opening doors – don’t worry, they simply add some extra immersion in their brevity.  Our one regret is the GamePad simply displaying an inventory, with no Off-TV play option.  Apparently we aren’t alone in our disappointment though, as the dev has already submitted a patch to address this, as well as some bugs. 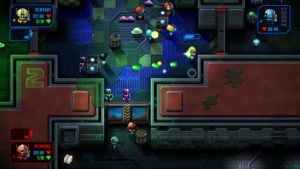 There’s a good challenge in Dual Core by and large.  The shortage of checkpoints might turn some off, even on normal difficulty.  How about just a single checkpoint at a levels halfway mark?  You can make the challenge more satisfying through smart play.  Saving health and upgrades for your teammate(s), reviving the fallen while others provide cover, or drawing fire from the front of an enemy so others can attack weak spots behind, things such as these make for great teamwork.

Dual Core is definitely one of the better eShop games we’ve played recently, and with its recently submitted patch it should become better still.  Top-notch multiplayer, with high replay value, this is one Wii U eShop game you’ll want in your digital collection.

Dual Core is definitely one of the better eShop games we’ve played recently, and with its recently submitted patch it should become better still.