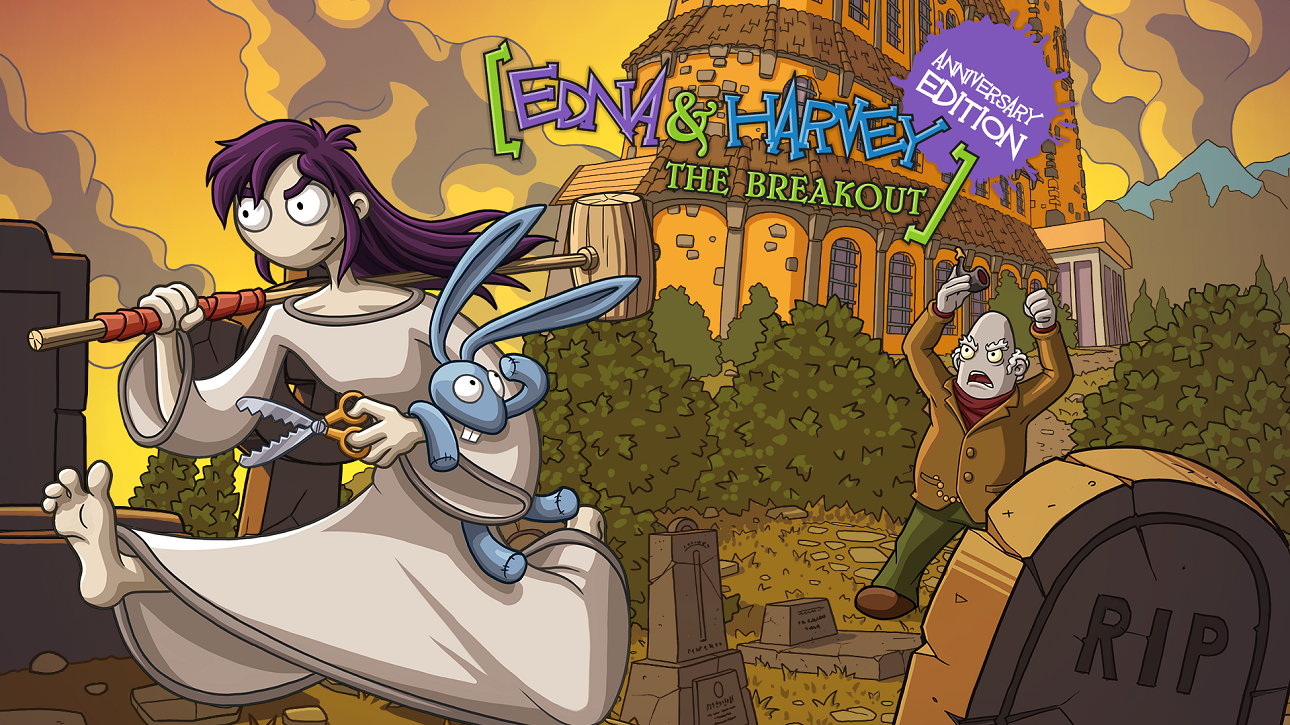 On the one hand, my fondness for point-and-click games made me the best choice to review Edna & Harvey: The Breakout – Anniversary Edition. On the other hand, I had never played the Windows original. Thankfully, that 2008 version is included here, making this an edition for new and returning players alike.

You change between the old and new visuals as you please. It’s just a shame it can’t be done with the flick of a button à la Another World. You need to pause the game, go into options, select game mode to change, wait for the new one to load, have the change save, exit and resume. It adds up, especially if you want to compare each scene.

Story-driven games like this are challenging reviews in a way, as much (if not most) of the plot could be considered spoilers. But I will say that this tale doesn’t leave the best first impression, at least visually speaking. It starts with Edna and her stuffed rabbit, Harvey, in a sanatorium with white padded walls; there’s not much to look at in terms of eye candy. Worse, the screen’s littered with nearly two dozen tiny circle icons for interactive areas.

These icons tie in with the controls. This game claims to have “intuitive controls,” but that’s a claim that I take issue with as a genre enthusiast. The controls here seem more akin to older graphic adventures, designed around a keyboard and mouse. They’re unwieldy, and it’s not difficult to see ways they could’ve (should’ve) been streamlined. That said, after a while, they become more or less second nature, but I’m not sure if casual players would want to be bothered learning such an atypical setup. Especially on a system that could have controls via Joy-Con pointers or touch screen control, neither of which are implemented for this game. Yet I do give credit for the choice to identify each icon by name with a button click, a thoughtful feature making this game more accessible.

Now that I’ve got some complaints out of the way, I’m pleased to say the overall game is a winner. All the hotspots, and ways to interact with them, are something I take delight in. There is much value, even for those that don’t advance the main plot. Both Edna and Harvey have a ton of very well-spoken dialogue and hearing them muse is a pleasure. Again, much of it is optional, but it adds so much flavor to the story while fleshing out the chemistry these characters have. Humor is subjective, and some of it here is crude, but I laughed on several occasions. It’s the staff, not the patients, that are the butt of most jokes.

The asylum from which Edna’s escaping is presented in a comical, stereotypical manner. It’s large, with lots of rooms to explore, and characters (both patients and staff) to interact with. Of course, Edna escapes her room early, but fleeing the building is something else. On the whole, the skeleton staff seems only mildly concerned that she’s roaming, especially with all of the exits locked. So you can wander about clicking on all manner of objects with only a nominal worry of being caught. While hospital settings are a standard in point-and-click games, this one’s infused with plenty of things to hold your interest. Even if the sizable environment isn’t appealing out of the gate, the way puzzles get incorporated around it is. And, while Edna and Harvey are still the stars, the supporting characters manage to hold their own.

What works so well with this is that Edna and Harvey are genuinely interesting characters. Clearly, the fact that Edna talks to a plush bunny (who also voices inanimate objects for her) is an indication that she is struggling with senility to an extent. Yet, the fact that she has a wiped memory by questionable staff makes you wonder just how crazy she truly is, and if she’s not the only one. The dialogue between her and Harvey is often warm and friendly, bringing smiles, and making this buddy adventure far less lonely as a result. I only wish the ending(s) were more satisfying, but I don’t dare spoil them.

The puzzles aren’t too out there if you’re familiar with these types of games, yet you might want a walkthrough hint at particular points. Some of this stems from the chiefly non-linear nature, which, while not seen enough in this genre, is excellent. It gives some freedom while eventually making sure you’ll get on the right track. Backtracking isn’t always fun, but again, Edna and Harvey’s reactions to their surroundings are worth hearing. Solving tough puzzles is satisfying. And the sanatorium, which you’ll genuinely want to explore, is a visually engaging locale.

Speaking of visuals, while the older has a definite charm, the new Anniversary coat of paint is decidedly better. The art fills more of the screen in higher resolution. Edna especially looks superior – more innocent, less scary. The animations are noticeably improved. Unless the original holds nostalgia for you, you’ll spend the bulk of your playtime enjoying the new look.

While adjusting to the controls takes longer than it should, it’s mostly worth it. Edna & Harvey: The Breakout – Anniversary Edition shines with more to like than loathe. Particularly the overabundance of dialogue, which is accomplished and comical. I’m glad I stuck with this game. As a genre enthusiast, I found it to be entertaining. 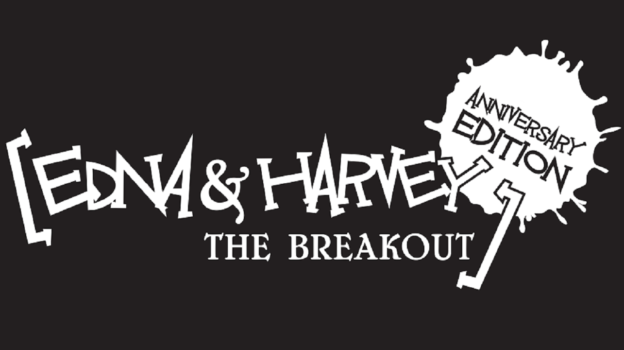 While adjusting to the controls takes longer than it should, it’s mostly worth it. Edna & Harvey: The Breakout – Anniversary Edition shines with more to like than loathe. Particularly the overabundance of dialogue, which is accomplished and comical. I’m glad I stuck with this game. As a genre enthusiast, I found it to be entertaining.