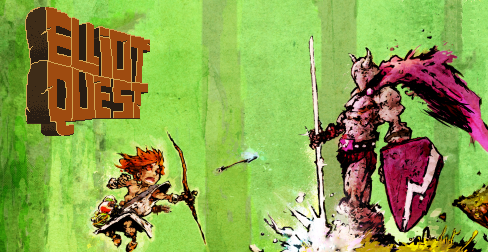 I’ll admit right through the gate that I did not know what to expect when I first booted up Elliot Quest for the 3DS. I had missed out on the initial Wii U release two years ago, and was curious where this indie title developed by Ansimuz Games would lead me. Right upon the first screen and then a few minutes later onto the overworld map, the evidence was clear that I was dealing with a game heavily inspired by Zelda II: The Adventure of Link on the NES. From there, I wondered if my experience in this 2D side scrolling adventure would either be insultingly unforgiving like the aforementioned game it borrows from, or one that takes its source material and improves upon it for a current audience. In short, Elliot Quest does both to a charming and satisfying degree, albeit with some frustrating moments in design and some unfortunate performance issues. 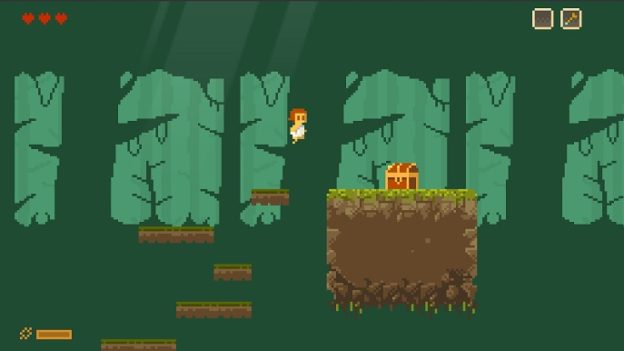 From the get-go of Elliot Quest, you have no idea what to do or where to go. In typical fashion of this genre during the late 80s, you are outfitted with little to no gear and no handholding. The world is both cryptic and vague and wastes no time reminding you of this as you’ll be witnessing the trials and tribulations of working your way from lowly hero to a powerful warrior with various tricks of the trade. The only drawback here from this transition is that, well, it’s gonna be tough to a certain point.

You control the titular hero, Elliot, who has a curse placed on him by the demon, Satar. What does the curse entail exactly? Well, Elliot cannot die sotospeak, aside from being resurrected throughout the game’s tombstone-esque save points — which at times can be too far apart for one’s liking. The penalty for “dying” in Elliot Quest is a gradual drain of XP points you gain from defeating various enemies on your quest to rid yourself of the curse. With each level-up, you will be given a choice to use skill points on abilities such as stamina, agility, and even the chance to find better loot. Upgrading Elliot’s abilities is key to chipping away from the early onslaught of enemies as you traverse through the game’s four dungeons. It’s just unfortunate that you will be seeing the words “XP loss” after every fatal hit time after time. The game’s difficulty ranges from challenging to slightly unforgiving, so expect some extended moments of time between leveling up Elliot. So frequently, you’ll realize how precious every bit of XP is, and that you should gather as much as you can, even as you cling to that last bit of health. 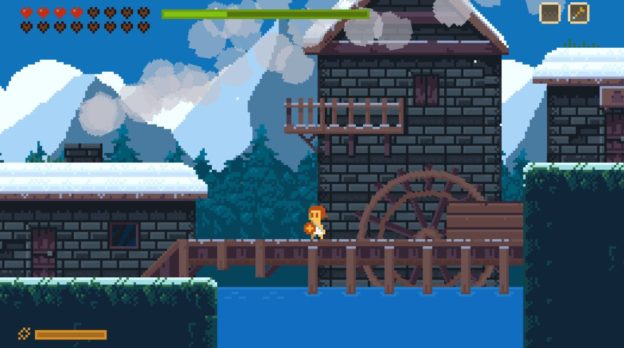 As far as controlling Elliot, it’s both great and tight to the touch, especially when making key platforming jumps. Each bit of movement feels just right at home for those who grew up playing this type of 2D adventure during the 8-bit era. Also, much like with various Metroidvania titles, you’ll also soon encounter an obstacle in a certain portion of the world that is only accessible with key abilities. For someone who is a veteran of the Metroidvania subgenre, this should be in my wheelhouse. In a ways, yes, it is; however, this is where several of the problems rear their head. While I understand the influence and subject matter that Elliot Quest is going for, it does lean too heavily into the cryptic and vagueness inspired from games like Zelda II and Simon’s Quest. For a callback of this type, it would help for some sense of direction without having to rely heavily on trial and error. It becomes increasingly frustrating when you lose track of where you have been or where exactly you need to go next.

In the meantime, once you finish the first dungeon, everything sorta comes together in terms of what location is the best course of action to progress. Throughout the game’s four dungeons, you will encounter more obstacles to conquer with the conclusion rewarding you with an elemental power that will help you gain access to new areas or defeat enemies with ease. Visually, Elliot Quest is pleasing and equally satisfying musically. The pixelated art style that dominates both the overworld and the sidescrolling segments are easy on the eyes and lend well to the 3DS. Not only that, but the music tips its cap to A Link to the Past as well. The first piece of music that you hear is even a subtle take on the theme from The Lost Woods. Still, don’t expect yourself humming many of these tunes like you would hear from indie hits like Shovel Knight and Shantae. 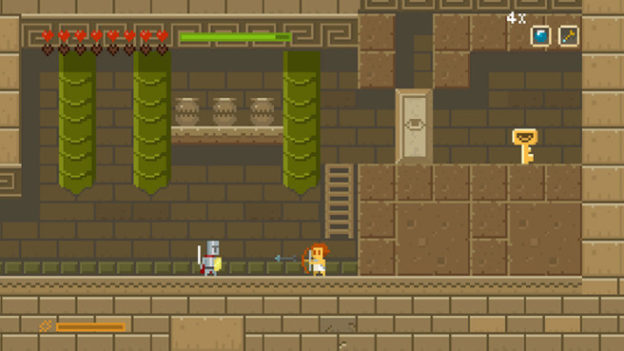 Now, the major drawback to Elliot Quest is through its performance on the 3DS hardware. For a game that’s oozing with nostalgic inspiration and quick-timing, throughout my time with the title I encountered various amounts of slowdown that hindered not only my movement but a good portion of my enjoyment. In order to alleviate this problem, I would I have to restart my 3DS and continue from my last save point. This would help fix my troubles, yet I would still find myself in the same situation that I’d dread at certain moments: slowly jumping or falling through the air with multiple projectiles awaiting to either miss Elliot or destroy him.

The 3DS port of Elliot Quest is being dubbed the “definitive” version, but it feels less than that the more I see these problems occur. An update was recently released to patch the aggressive slowdown. It’s now less frequent, but it eventually returns when things gets a little hairy on screen. 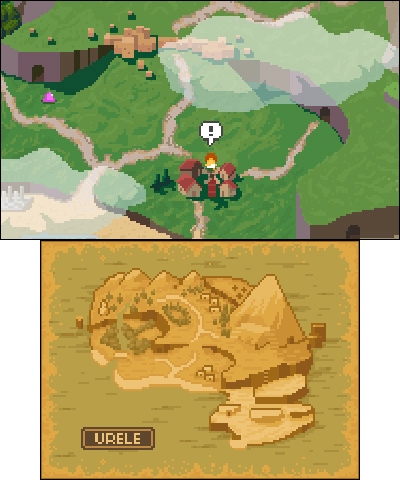 Overall, this sounds like I’m taking a turn for the worse with this port of Elliot Quest. But, honestly aside from the occasional bad slowdown during mid-jumps or that unfortunate crash at the end, I actually was charmed by the entire experience. Sure, the game’s overarching vagueness  was jarring and made me lose my patience, but I found myself having too much fun on this adventure. The abilities you gain are quick to use at your disposal and discovering that new shortcut from backtracking always warms my heart everytime I play a 2D Metroid title.

Sure, the 3DS port of Elliot Quest is by no means the “definitive” version, and I personally would wait until a future patch is released to correct the glitch you see at the final dungeon. Until then, my time with Elliot Quest, while met with some glaring presentation issues, was a decent experience that made me smile with its many callbacks to Zelda II and games that helped define “NES hard.”

An enjoyable, but flawed port

Despite some occasional slowdown and a cryptic set-up, Elliot Quest is a worthy homage to games like Castlevania II and Zelda II: The Adventure of Link. If you missed out on the Wii U version, give this 3DS port a go. Just be prepared for some annoyances, though.