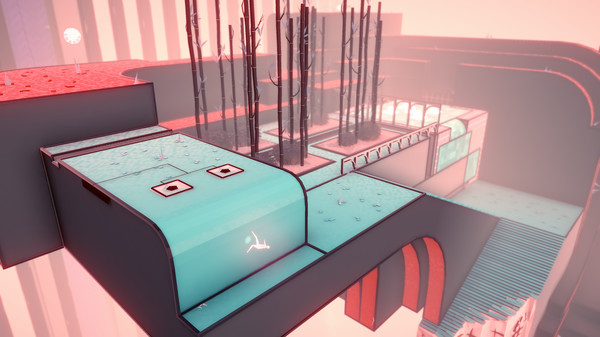 A puzzle game set within an M C Escher world, Etherborn is an uncannily pretty game. The aesthetic is woven into every element of it, with soothing music and a gentle colour scheme that takes on a sense of eeriness when the narrator chimes in with a darkly existential story.

You play as a character described only as a “voiceless being”, roughly human-shaped but with white translucent skin and preternaturally graceful movements. You follow a voice telling a tale that probes the human condition and the nature of reality. The voice guides you towards the puzzles you have to solve to reach an ultimate conclusion that reveals your identity.

Even the progression between levels incorporates the ethereal feel of the game. Rather than just jumping from one to the next, you walk along the boughs of the tree of life to get to your next destination. 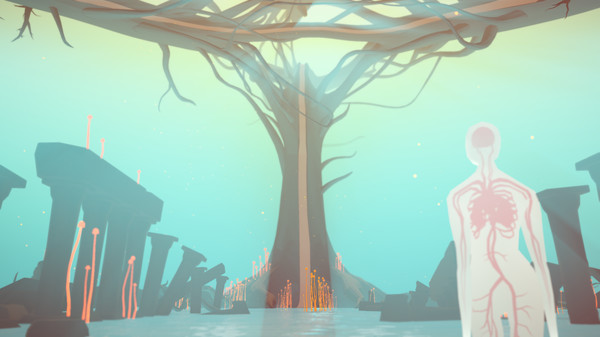 The world you inhabit is unlike anything you might experience in reality. There is a lot of natural imagery, with bioluminescent plants dotted around the unusual landscape and flocks of birds rising into the air as you go past. The physics are completely alien. Gravity pulls you onto whatever surface you stand on and, as long as it curves you can follow it onto any side of the platform.

This gives the puzzles you have to solve an extra dimension – literally. They develop in complexity as new mechanics are introduced, with more advanced levels that see the world shift and change around you in response to your movements. The puzzles are genuinely challenging in a way that makes them feel really rewarding when you finally work your way through.

Some aspects of the gameplay can be a little frustrating. For example, the character you control moves with long, elegant strides, sometimes sending it tumbling off the edge of the platform. This isn’t the end of the world because you do respawn immediately, practically where you fell, but it can be annoying. 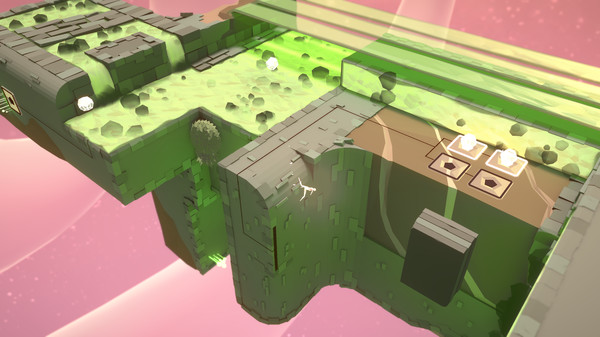 In this respect, Etherborn is the kind of game you need to be patient with. The platforms get bigger with each puzzle you solve, meaning you need to have a good memory to keep track of every side of each one and the ways they are affected by changes you trigger. This also means that it can take longer to solve each puzzle just because there is so much running around to do.

Etherborn is certainly a unique approach to puzzle games, with a beautiful design and a surprisingly profound story stitching it all together. It’s fairly slow paced and can be frustrating, but that just means it feels much more rewarding with each milestone you reach.

Beautiful to watch and genuinely challenging, Etherborn offers an innovative approach to puzzle games that has resulted in something unique and provocative.