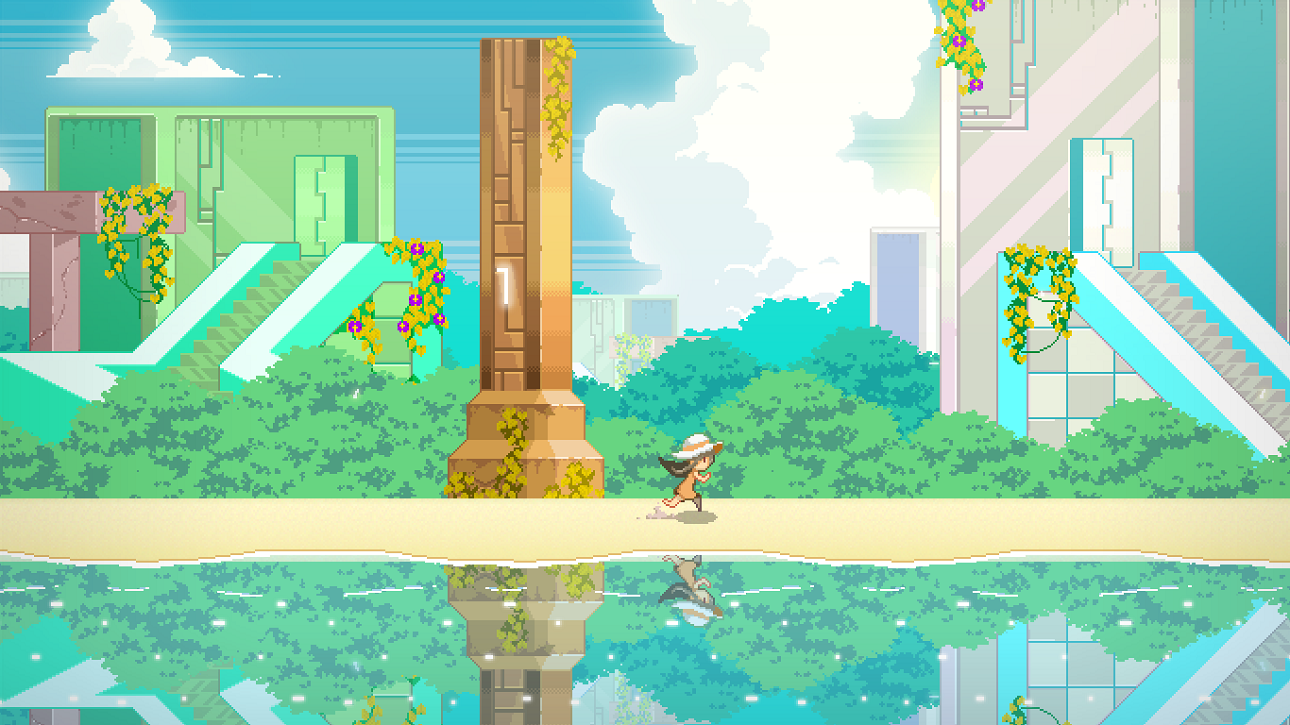 Trying to mix a puzzle platformer and visual novel seems like a tall task, but Evan’s Remains (funded via Kickstarter) gives it a whirl. Sadly, neither area gets pulled off that successfully, at least to my satisfaction. However, we were fortunate enough to receive two press codes. My colleague, Rachel Poli, enjoyed the game much more than I did. So I’ll be sharing some of her observations, even though the final verdict is mine alone. Despite some commendable aspects, Evan’s Remains can’t move beyond fair territory in my assessment. Here’s why that’s so.

The plot, which involves an island search for a missing person (the titular Evan), is short on context. It spoon-feeds details as you advance, jumping from past to present. The challenge with this approach is you risk your audience not getting invested in your characters. That was my case, as I didn’t find the playable character, Vanille, nor any of the other leads particularly appealing. Rachel thought their personalities sufficed to make her want to learn more, but admitted the dual-PoV narration was super complex for a short game. For me, it boiled down to balance not being struck between a good mystery and an intriguing one.

Balance also stands out in the gameplay, as this game quickly falls into predictable patterns of conversations and monolith jumping puzzles. While the conversations did improve some as much needed context started to fill in, the jumping puzzles soon wore out their welcome. They just weren’t strong enough to carry the game in its entirety. Neither varied enough nor spaced out enough, they didn’t do it for me. Rachel pointed out the missed opportunity to decipher the monolith puzzles ourselves. Instead, we needed to rely on our in-game companion (Clover) to share the results in a non-interactive fashion.

To make things worse, even Clover wonders why Vanille doesn’t just walk past these puzzles. They aren’t a block to your progress; you can skip them all, in truth. Like the characters, I had a hard time getting invested in these puzzles. Eventually, I did skip some, not so much for difficulty but more because I found they grew dull. Should you only want to enjoy the story, this is a cool feature. But since I found the story had issues, the liberal use of this skip feature had a limited positive impact.

While the puzzles are pretty indistinguishable from a graphics standpoint, the rest of the game is a visual triumph, something I can’t emphasize enough. The exceptional animations, background art, parallax scrolling, sprite work, and more, combine to make a game that’s more fun to watch than it is to play. Couple these with an enjoyable, fitting soundtrack, these aesthetics deserve to be attached to a more compelling game.

I don’t risk spoiling the story, but I was anxious to reach the end. It was a struggle at points, but this game is only a few hours long, even shorter if you skip lots of the puzzles. The tale ebbed and flowed from subpar to decent, back to subpar. It just missed the mark for me, though Rachel was more engaged in the twists and turns. Maybe if the game had gone full visual novel, it could’ve had further developed characters, more details, and an improved structure.

Evan’s Remains is a “mystery-thriller” that, while pretty big on mystery, is shorter on thrills. If the story (and the way it’s set-up) connects with you, you’ll have much more enjoyment than I did. However, I don’t think this is a tale with a broad audience in mind. Joined by puzzles that look and play quite similarly, the impact lessens. But the great audio/visual package elevates this one to an okay experience for me.

Evan’s Remains is a “mystery-thriller” that, while pretty big on mystery, is shorter on thrills. If the story (and the way it’s set-up) connects with you, you’ll have much more enjoyment than I did. However, I don’t think this is a tale with a broad audience in mind. Joined by puzzles that look and play quite similarly, the impact lessens. But the great audio/visual package elevates this one to an okay experience for me.