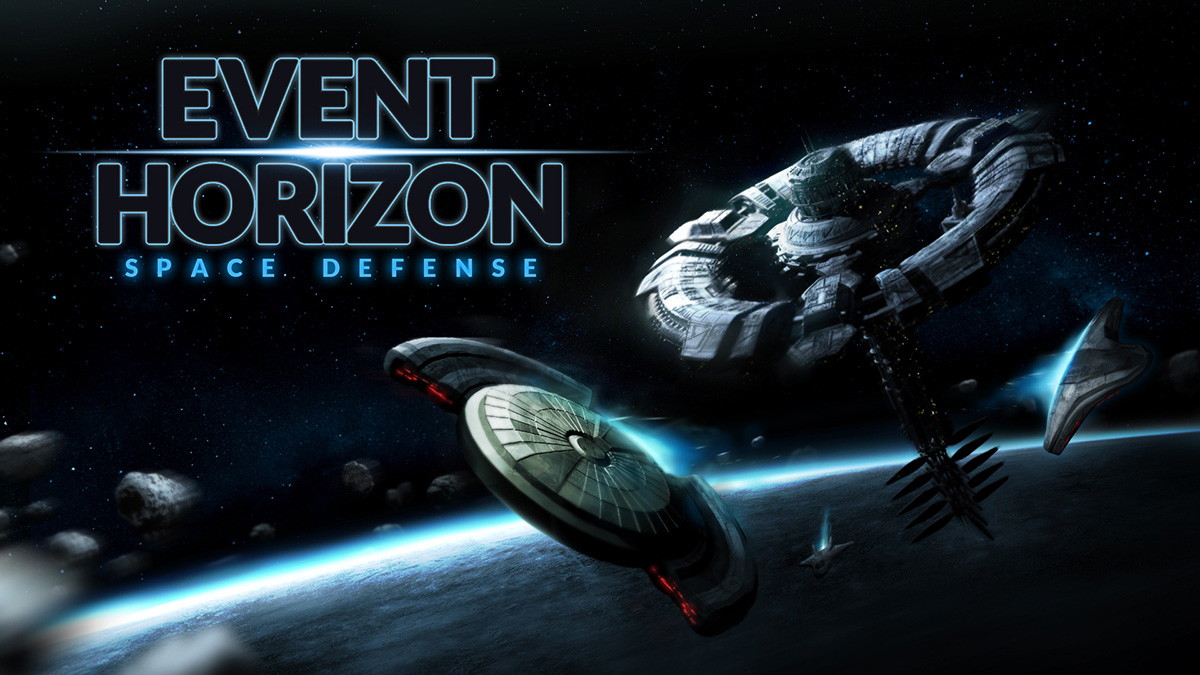 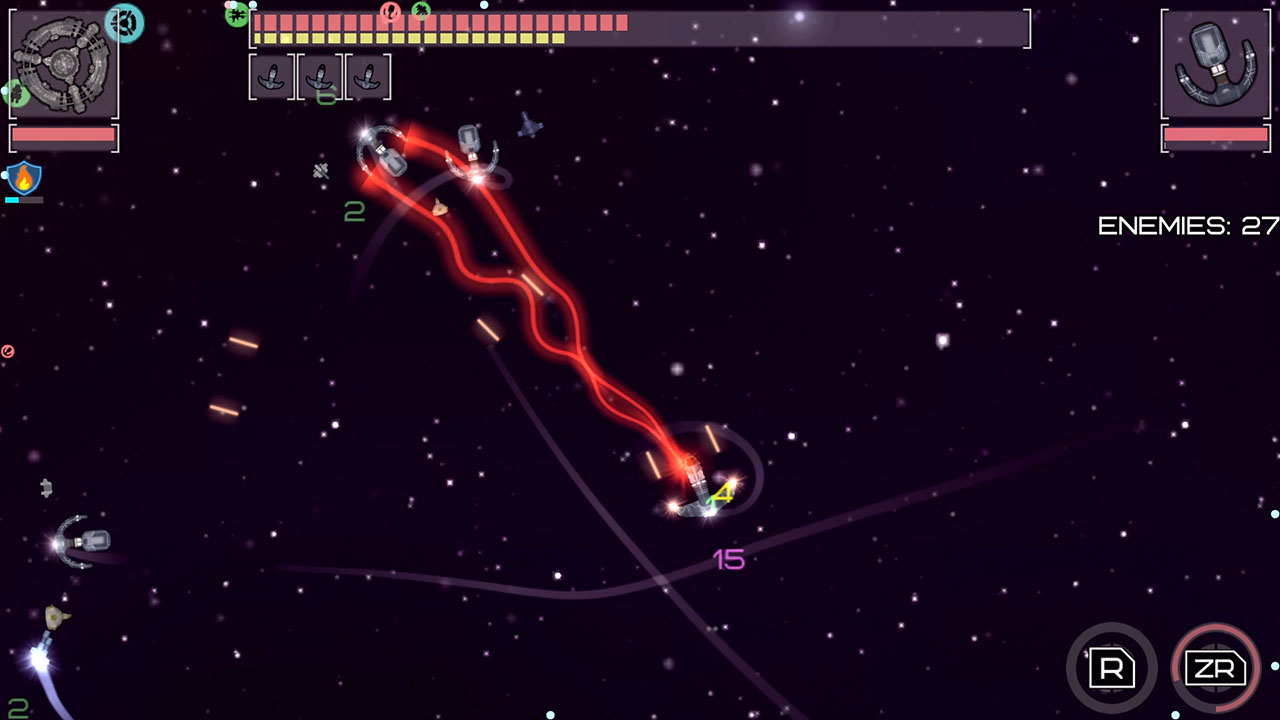 Yes, not only do you have to survive wave after wave of enemy ships, you have to protect your space station. To get started with this mission, the game will run you through a tutorial. If you are into some vintage arcade games, you may recognize the baddies from Space Invaders while your ship looks a lot like the little triangular Asteroids ship. The mash-up was fun, but it only gets you used to the mechanics of game play. Actually targeting your real opponents is a bit trickier because the Space Invaders test enemies are several times larger than what you will face when the tutorial is over; but this will be the least of your concerns.

To keep things challenging, you have limited structure points and limited fire points. The fire points regenerate over time, but your energy weapons only travel so far so you have to get close to the enemies to hit them. The downside of this tactic is that you are now in range for them to hit you. The other challenging bit with close combat in space is maneuvering. Even if you are not familiar with Newton’s laws of motion, most of us have played a space adventure. As such, we know that once you start off, changing direction is like drifting all the time. 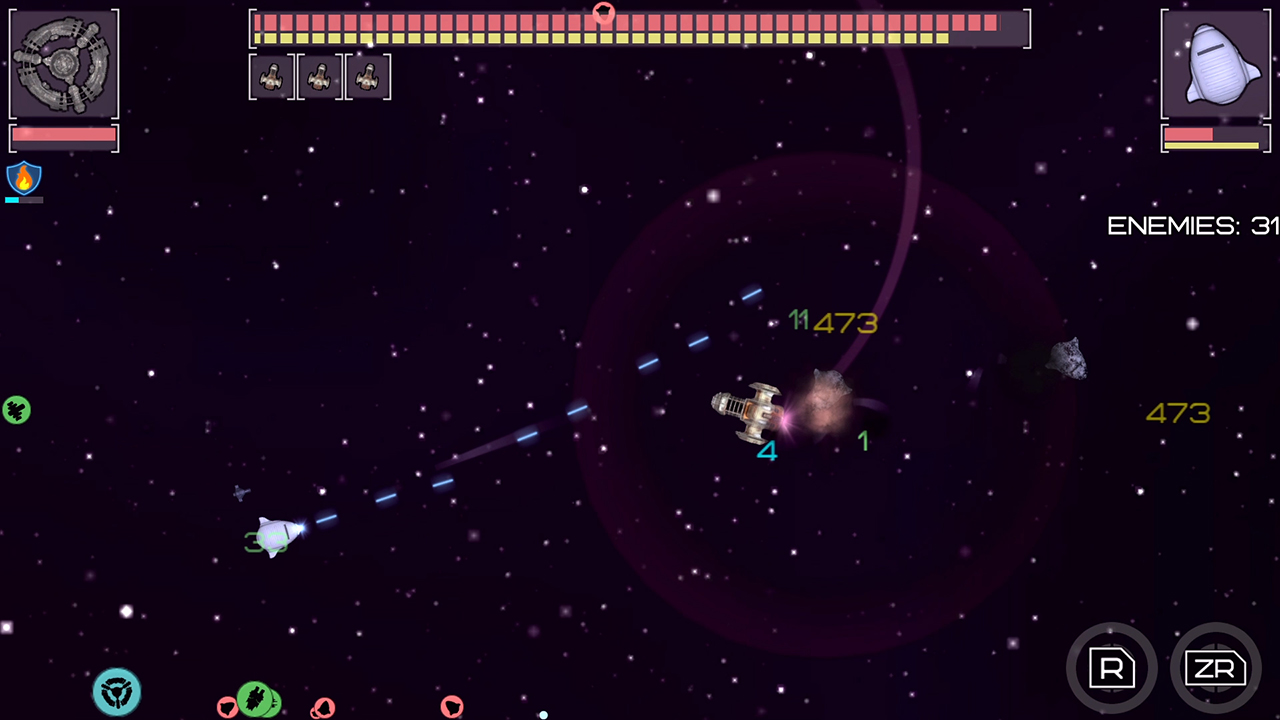 It doesn’t get you from A to B as fast as you may like, but it is fun.

Next up are the improvements and upgrades, of which there are a lot. Seriously, quite a lot. As usual, you start with a basic model ship. After that there are almost 100 other ships to which you can upgrade. Don’t get too excited; leveling up your current ship to unlock the next upgrade will take a while. On the plus side, this means you can get an extraordinary amount of play time. The upgrades encompass everything from your drive engine to shield generator to armor plating to weapons, etc. The ship upgrades work as expected; go from a simple looking triangle(ish) thing to a big “kill-em-all” battle wagon. 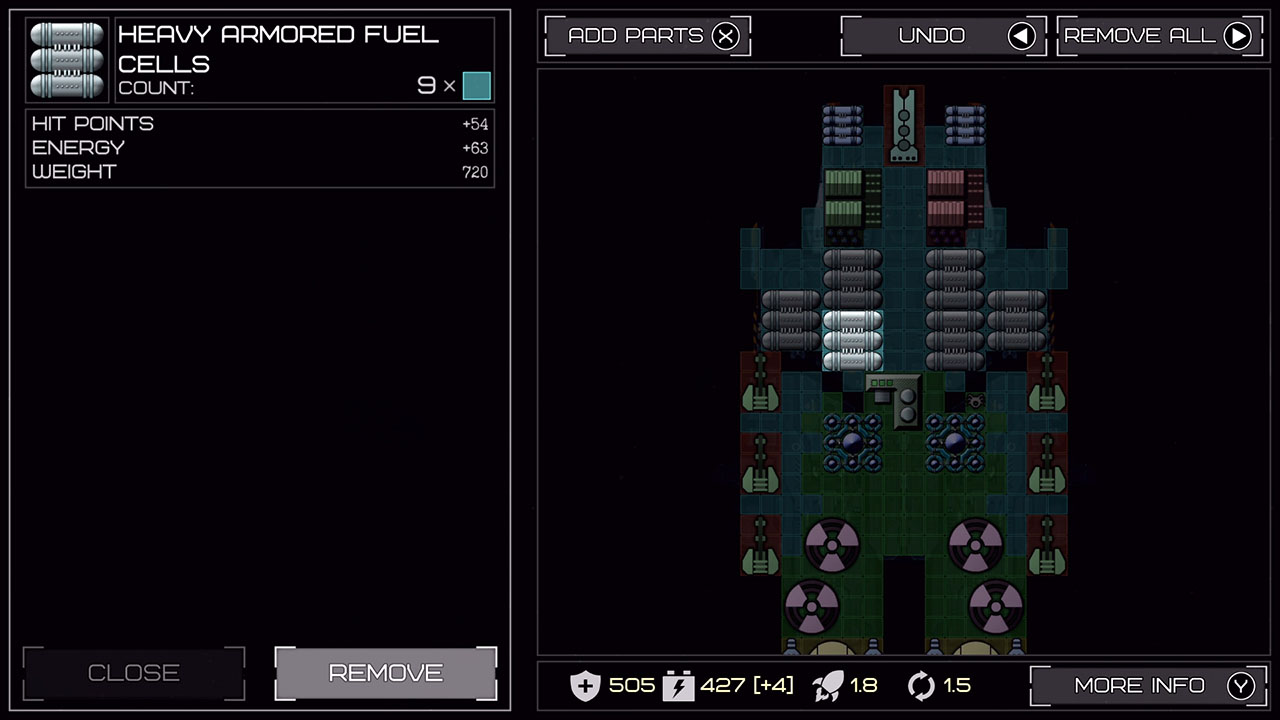 As in real life, nothing is free; you are going to have to pay the merchants in their flying store for any really good upgrades. The easy way to earn credits to buy the upgrades is to salvage the usable debris from the shattered remains of enemy ships. They will drop plenty of low level hardware, and occasionally something you can put to use, but mostly it is good to sell to the merchant so you can buy the really good stuff. Before you get excited about that mega hyper destructo-thingy, make sure your ship has been leveled up or you may not get to mount your new pop-gun for a while. By the way, don’t forget the space station you have to protect. You get to buy and install upgrades for that, as well. Guns and armor plating are very good place to start. Between your ship and the space station, there are enough upgrades in various categories to keep you busy buying, planning, installing, and rearranging all the bolt-on bits to keep you busy for a long time. After a while, you might actually wish the upgrade process was a bit simpler and faster. 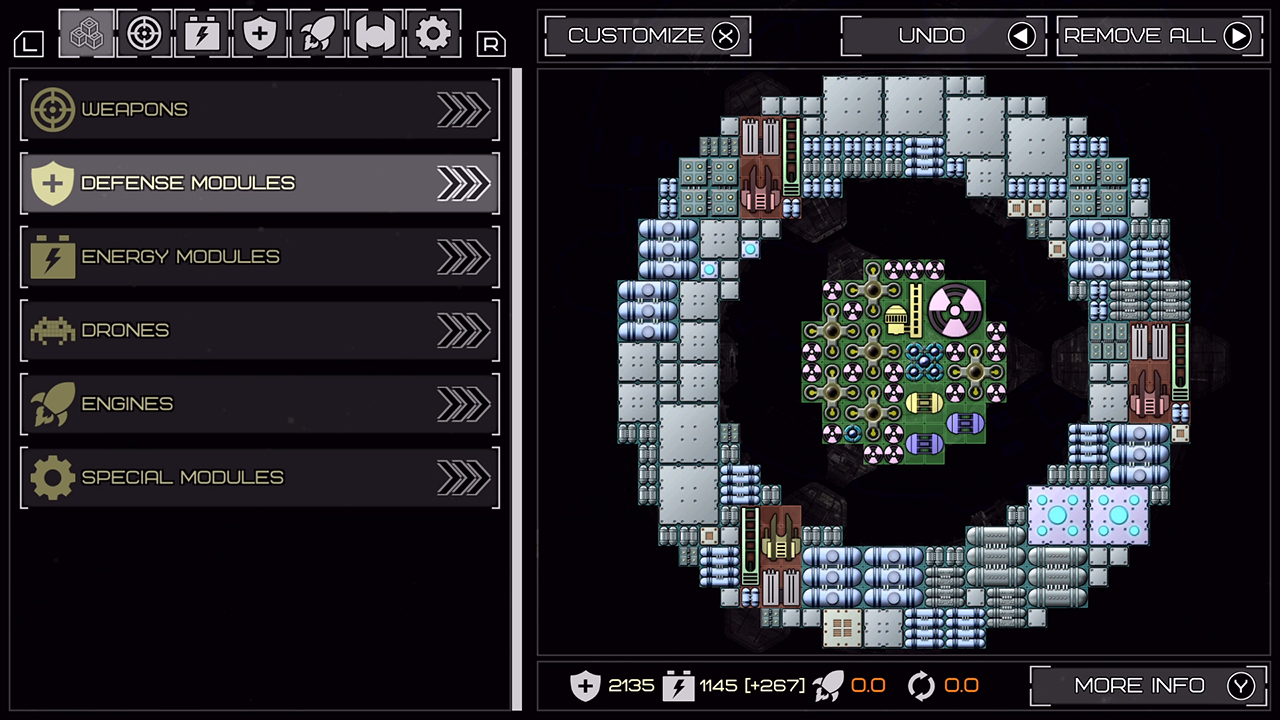 There is one other worthwhile type of modification you can make to your ship—you can change the color using one of the control center slide bars. You can shift the color across the spectrum from red to violet; and it is a good idea to pick a new color because a grey spaceship in a black background with some white points for stars can be a bin monotonous. Besides, a nice bright yellow or green is much easier to see, not to mention just plain cool looking.

Once you decide to engage the enemy, they will come in waves. Each round can see you fighting 3 or 4 or 15 enemy vessels at the same time. Don’t despair, space defender; you won’t have to face the horde alone. There are others cruising about the region of your space station: merchants, repair ships, and everybody’s favorite…mercenaries. These mercenaries won’t attack you, they are waiting to be recruited and paid by you to help with the defense of the station. By the way, you do want to get their help as soon as possible. As with most games, the further you go, the more challenging the enemy becomes. This applies to each new level as well as how much and how fast you upgrade your ship. The tougher you get, the tougher your enemies get. Actually, with over 100 ships to unlock and a never-ending string of bad guys to shoot, friends in distress to save, and places to explore this game goes on as long as you want to keep playing. 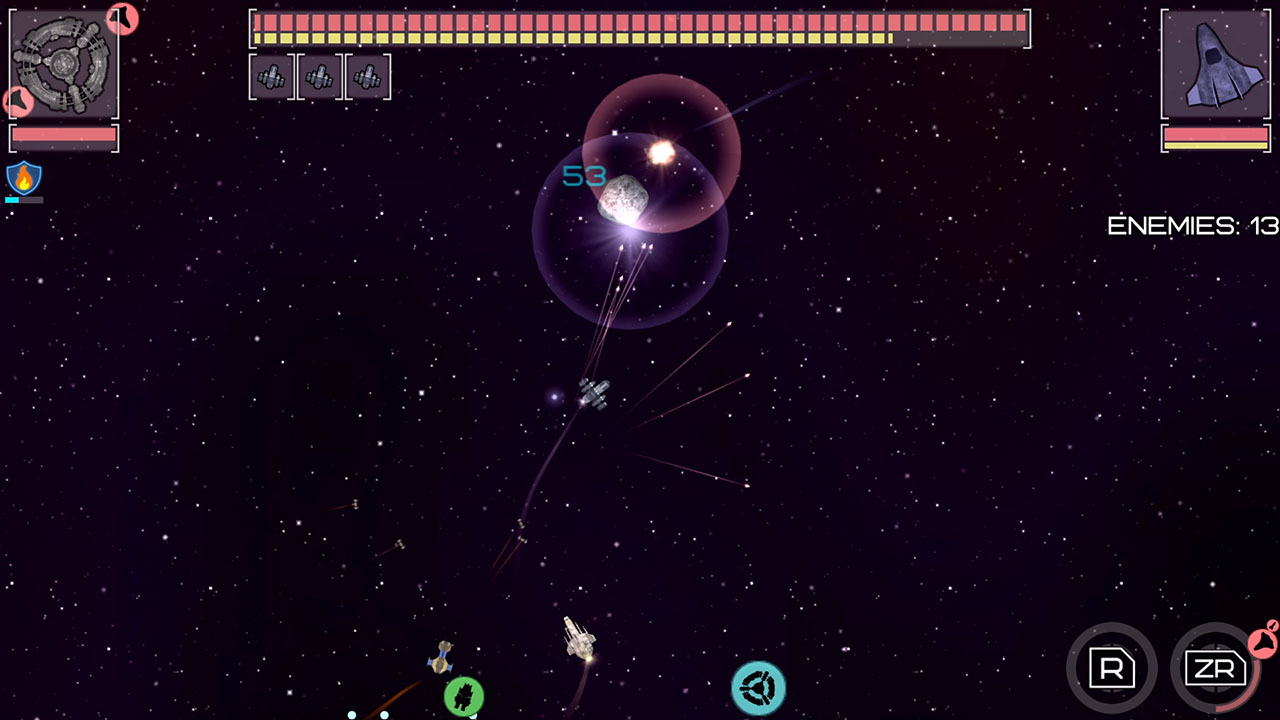 This all sounds like a great space adventure, but there is a drawback; there is no real story or plot to engage the player. Yes, you get ships and weapons and loads up upgrades and tons of play time, but it all comes down to just fighting wave after wave of bad guys in spaceships. If you can handle the level grind and upgrade treadmill, Event Horizon – Space Defense is plenty of fun. If you need more player engagement, the level grinding can become a bit mundane.

If you can handle the level grind and upgrade treadmill, Event Horizon – Space Defense is a fun arcade action/adventure role-playing mash-up. If you need more player engagement, the level grinding can become a bit mundane.