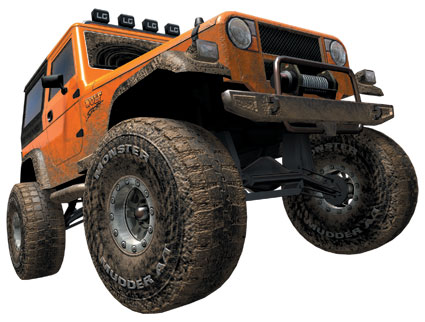 Excite Truck was one of the games I purchased at launch, and one I’ve played almost non-stop since then. It’s a game that brings the fast-paced arcade style racing to the living room. I was skeptical at first to how the game would play, but my worries washed away in a splash of truck carnage.

Tricks and getting stars are the name of the game. While it’s good to get 1st in a race (you get 50 stars), the important thing is to get as many stars throughout the race. Big air, drifts, tree runs, air spins, truck smashes, and rings all add to your star count. The game provides plenty of unlockables as you progress through the game. There are tons of trucks, levels, tracks, and trophies to unlock. 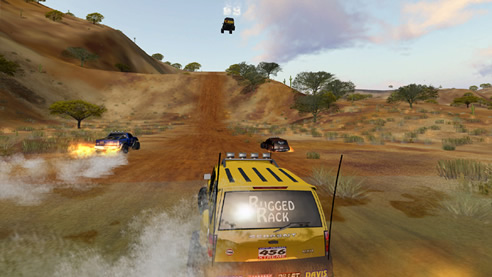 Excite Truck has pretty intuitive controls. Most everyone I’ve played multiplayer with both experienced and non-experienced didn’t seem to have a problem picking the controls up. The multiplayer offers only 2-player support, but there’s a lot going on. I’m not sure it would be as fun looking at even a smaller split-screen, even if more of your friends could play. It’s a fun way to relax and get some fast-paced racing compared to something like Need for Speed.

Overall the game has been well worth the $50. I play it almost as much as Wii Sports–which is saying a lot.

Visuals: Excite Truck has very realistic visuals from reflections on the water to light/shadows/reflections from the trucks. There are plenty of great crash sequences with parts flying everywhere–even some wheels go flying. The environments are HUGE and the levels are engaging. One of the best features is the terrain transformation on the fly. It’s so cool to see the road ahead shift and change in front of you. It adds to the frantic nature of the racing.

Gameplay: The gameplay is fast and keeps you on the edge of your seat. I’ve tried playing the game sitting back on the couch, but there’s something that always gets me to lean forward for a jump or turn. The game has a Rush feel to it. Crashes, jumps, tricks, and crazy levels are all part of the formula here. It’s just the cityscape that’s missing.

Replay Value: Excite Truck is definitely a title you can play over and over again. However, once you’ve unlocked everything in the single-player mode; you really need some friends to extend the replayability.

Wii Innovations: For what it tries to achieve, Excite Truck succeeds. It really uses the Wiimote well. It’s the not so conventional way to use the remote (sideways), but it work flawlessly albeit a bit touchy. The time taken to get used to the controls is minimal.

Fun Factor: Excite Truck is ALL about FUN. The game really revolves around that theme. It doesn’t thrive on real-world racing realism. It’s just about doing crazy tricks and over-the-top racing.

Verdict: If you have the money to invest in a fun racing game, you will love Excite Truck. As far as the launch titles go, it’s the best racing game hands down. This game also makes for a good stocking stuffer for a friend or family member.