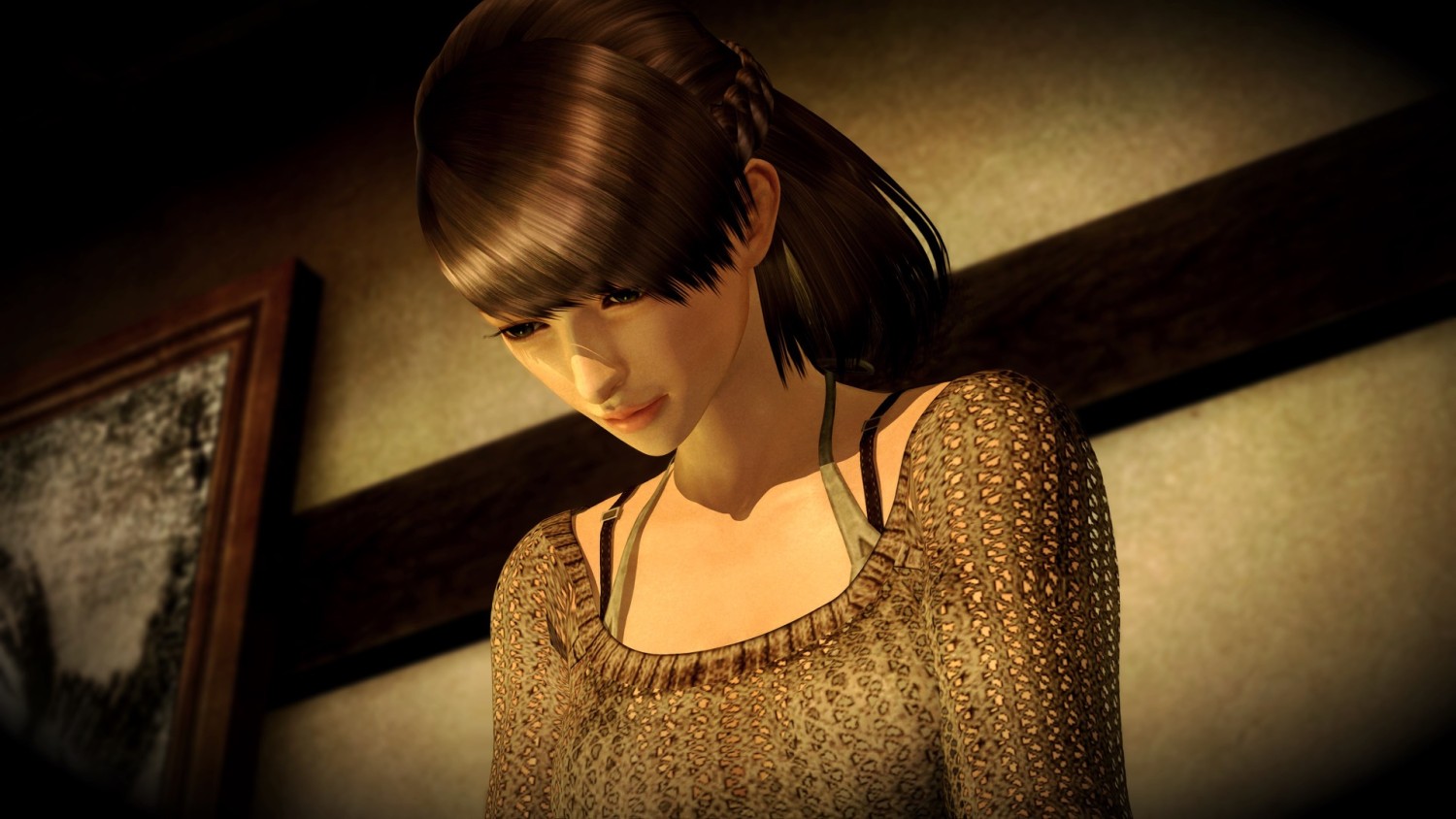 The month of October. The month of scares and the love of all things that go bump in the night! What’s funny though, is that horror movies are by far one of my least favorite genres. They’re predictable, sometimes even laughable. But horror games, that’s a different story. In a horror movie, it’s pretty easy to figure out who’s gonna die and when. But in a horror game, you can at least change the outcome of a situation and, when your character gets killed, it’s on you and not some poorly written script.

Nintendo has decided to dabble in the horror genre by bringing over the Fatal Frame franchise to the Wii U. While this isn’t the first time that Nintendo has featured Fatal Frame on a Nintendo console, mainly the Wii and 3DS, the franchise has seen a release on other consoles such as Playstation 2 and the original Xbox.

The reoccurring object in this game, the Camera Obscura, is the main weapon used when excising threatening ghosts that seek your death via a ghostly bear hug. But let’s face it, when it comes to Nintendo and horror, there have been only a handful of scary games that left an impact. Will Fatal Frame Maiden of Black Water give us the scare that we’re looking for? Or will a game focused around camera features only continue to make us yearn for the fantasy title that is “Pokemon Snap U”?

Our story starts out with Miu Hinasaki as she awakes in a basement that may or may not have a leaky pipe, as it’s filled with water along with an abundance of corpses. Before she can make it to safety, she’s captured by mysterious unknown forces with her fate, left to mystery. Enter Yuri Kozukata, a young girl troubled by images of the dead, who seems to possess the ability to see the shadow of objects that may be close to the spirit world.

Aside from Yuri, we have Ren Hojo, a writer who is haunted by dreams that almost seem like a distant memory. A memory that is related to past events upon Mt. Hikami. This mountain will be your setting for the game, as its past inhabitants are no longer of this world. Strange cult like rituals took place on this mountain taking many lives, some unexplainable, some never repeated to the world. All three have a connection to this cursed mountain, it’s just a matter of who will survive its mysterious power.

That’s pretty much one of the best ways to describe this plot, as the story itself is experienced mainly through notes found on the floor. While this can make the overall experience confusing and muddled, the plot really starts to pick up around the sixth drop, this games version of chapters, as you’ll begin to learn more about the dark secrets of Mt. Hikami and its relationship to our trio.

What’s really odd about this mountain, is that it used to be a tourist’s location. I can just see the brochure now “Come to beautiful Mt. Hikami! Visit the relaxing Mikomori Hot Springs. Take a dip in the ‘Pool of Purification’. A lovely stroll through the ‘Unfathomable Forest’. And for that romantic scenic view, be sure to visit the ‘Forbidden Valley’. Mt. Hikami, come for the sights, never see your loved ones or the light of day again!”

Maiden of Black Water is played through a third-person perspective, giving you a decent view of your character’s position on the map, as well as the general area. Your GamePad follows that traditional Wii U style of a mirrored screen of the events transpiring on the TV and with a brief tap, can be transformed into your map.

This biggest feature on the GamePad, perhaps one of its shining moments since its release, is the camera feature. Using the built in gyroscope, you can move freely around defending yourself from nearby ghosts, or just get a better lay of the land. While you can use the right thumbstick to look around, you’re gonna need to get up and move when you’re in a tight spot with angry spirits breathing down your neck. There were many time I caught myself doing complete 360 spins in my apt that while hilarious, kept me alive during my playthough. It’s fun, immersive and one of the shining moments of the game.

Another thing about your camera, are the upgrade able features and ammo. This isn’t your fancy new aged digital camera, this bad boy takes film and there’s a fair amount conveniently placed along the mountain! Left by other fallen tourists perhaps? There are multiple types of film coming in different colors and flavors. Some deal out more damage, some load faster but very few will you find a mix of both. That’s when you start spending your ghost-busting points! When you successfully exorcise a ghost, you’re rewarded points on how well of a job you did. Wow, this really is Pokemon Snap but with ghosts! You can use said points to upgrade your cameras special features, or basic abilities such as loading times, damage output etc. Unlike some games with elements like this, I actually got a genuine sense of power when cashing in my hard earned points! Also, you might get so scared, that you’ll forget that you had them in the first place and save up a bunch in no time.

After defeating enemies, you’ll have a brief opportunity to use the “Fatal Glance”. Doing so, will allow you to not only nab extra points to upgrade your camera, but to get a glimpse at the last moments of these spirits. While this feature isn’t seen with every ghost, I always looked for every opportunity to look into their past. Who was this person? Why did they come here? How did the meet their fate?

Unfortunately, Fatal Frame, doesn’t really offer a large realm of exploration, as things are set on a very linear path. However, the game emits such an eerie vibe, that when straying off the main course, you can’t help but shake this feeling that “I shouldn’t be here…”. The most that you’ll find from exploring is the abundant amount of health drops that this game has to offer. Herbal Medicines, usually in pairs, recover small bits of health and Sacred Water vials that restore your health completely are never in short supply. Pretty much, I was never low on healing items, which sadly made dire situations, less stressful, which in a horror game, is actually something I look for.

But don’t get me wrong, this game has its very scary moments. While I don’t believe in ghosts myself, if I saw an extremely tall slender-man like woman with a creepy smile and laugh that would put the Joker to shame, I’d shriek at a decibel I wouldn’t think possible. It also doesn’t help that whenever at Mt. Hikami, it’s always dark, misty and sometimes rainy usually in a very dense forest. Still not scary enough?

Ever heard of a place called Aokigahara? It’s a forest located at the Northwest base of Mt. Fuji over in Japan. It’s also a suicide hotspot with regular patrols to prevent those from taking their own lives. Not only that, but the story and legend of that area is what Fatal Frame: Maiden of Black Water is loosely based on.

While this game does offer a slow but interesting story, immersive camera controls and a very haunting setting, there are some features that I can’t look over. First, controlling your character feels stiff and sometimes unresponsive. It’s like I’m purposely fighting to get them to go where I want, and when you have to flee instead of fight, it becomes a problem fast.

Second, the characters. They’re boring. Really boring. The ghosts that you fight seem to have more emotion than them. While I can’t speak for everyone, I’m fairly confident that if you saw multiple ghosts with terrifying faces walking/running towards you, you’d scream or at the very least show a great amount of concern in your face. Not for the mighty trio of Fatal Frame! It’s like they took some horse tranquilizers and have no idea where they are. Something like this is very hard when it comes to immersing myself into a digital world. Why should I be scared if my main character shows about as much emotion as moist sponge? This also ties in with the voice acting which overall feels lazy and lackluster. Almost like the phoned it in and had to record at the last second.

Overall, I’d say Fatal Frame: Maiden of Black Water is, OK. It’s not great, it’s not bad, it’s just OK. Using the GamePad as your camera to take down ghosts is fun and the setting is very spooky, but you’re immediately pulled out of the immersion by poor characters, muddled story and stiff controls. Thankfully, you can download a free trial from the eShop to see if this is something that you’d want to invest in.

Great atmosphere and use of the GamePad as a camera but the poor controls, muddled story and uninteresting characters can’t be overlooked.