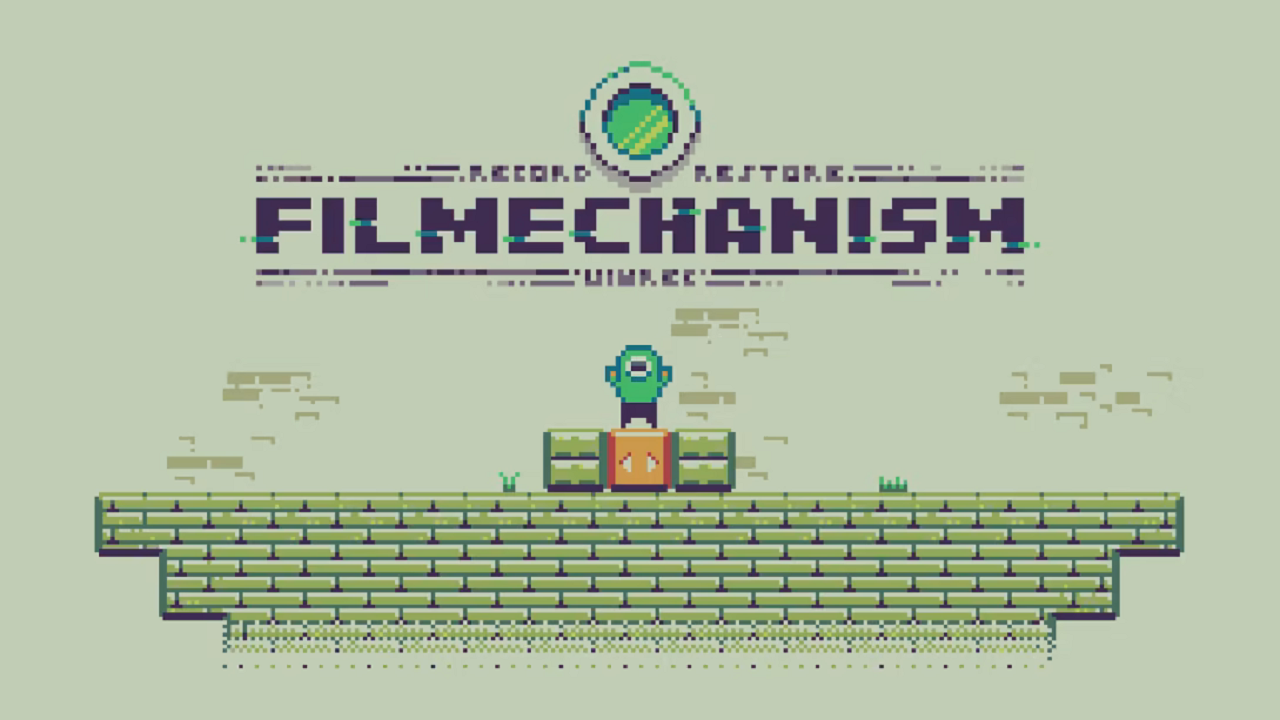 When I first saw that FILMECHANISM was available for review, I immediately jumped at the chance to play and write a review for it. The art style reminded me of some of my old favourite Game Boy games. Couple that with this being a 2D puzzle game, with accessible, pick-up-and-play gameplay, and you’ve struck gold in my eyes.

In FILMECHANISM, you play as REC, a camera humanoid on the hunt for the golden camera battery. REC must traverse several puzzles with varying difficulty to reach the end goal flags to progress from world to world. The layouts are that of a classic Super Mario game, starting in World 1-1 and moving from stage to stage – and with each world comes a new level theme and new gimmicks to play with.

As REC, reaching the flags isn’t as straightforward as you may think. Each level has blocks, falling spikes and steps, and many other obstacles preventing you from reaching your goal. Each stage has at least one single-use camera battery to collect. Collecting this allows REC to record an image of the current layout of the location using the R button. With this, you can then move obstacles around and then, via the use of the L button, restore the image that was taken. This will restore anything you have moved or destroyed back to its prior state. This is your only tool when trying to solve these levels, and it’s used in many awe-inspiring ways during your journey in FILMECHANISM.

Throughout the over 200 levels, you are timed on how long it takes you to complete each one. This awakened the perfectionist in me, and I found myself retrying to shave seconds off my time. Each world also offers three difficulties: normal, hard, and hell. The normal levels are a breeze, and once you have learned the basics, these aren’t a challenge at all. It’s the hard and hell levels where the game truly excels. These require you to think, and most will consist of more than one battery, therefore needing more than one image to be taken. It can be pretty confusing at first, but oh so rewarding when you get it right. If you are genuinely stuck, you can use coins awarded for completing each level to reveal hints. I’ll admit, I used this feature a handful of times… I mean, it’s there, so why not?

The controls are simple to learn and easy to remember through its handy first-stage tutorial. From then on, it’s up to you to work out the puzzle ahead. This can be done either through trial and error or – my method – stare at the screen without blinking and try to foresee every correct move, then audibly shout “Got it!’ to myself before clearing it with ease (after my third attempt!).

One of the most charming and alluring parts of FILMECHANISM is the art style. The use of green in the 8-bit retro style is easily a homage to the classic Game Boy. I imagine many gamers will be drawn in based on the aesthetics alone – and then stay for the gameplay! This art style is so simple and so clean, REC is a super cute protagonist, and I can’t stop gushing about this game.

What it lacks in an actual narrative, FILMECHANISM makes up for in everything else. With its addictive puzzles, simple yet thought-provoking mechanics, catchy soundtrack, and retro but modern 8-bit world, you have the complete package when looking for a 2D puzzle-action game. FILMECHANISM will be a go-to recommendation for a long, long time. Here’s hoping we can see more adventures with REC in the future.

What it lacks in an actual narrative, FILMECHANISM makes up for in everything else. With its addictive puzzles, simple yet thought-provoking mechanics, catchy soundtrack, and retro but modern 8-bit world, you have the complete package when looking for a 2D puzzle-action game.