The newest entry in the long-running series, Fire Emblem Echoes: Shadows of Valentia is sure to prove popular with many 3DS gamers. Its predecessors had a strong reception on the venerable handheld, and this latest release is already doing well in Japan. Let’s find out a bit more about “this melding of modern and legacy Fire Emblem™ gameplay” in this reimagined Famicom classic.

“Once upon a time …” the themes of destiny, religion, and warfare were thrown into the turn-based tactical RPG blender. The plot is unremarkable and unoriginal, but I can cut it some slack on the latter as it’s inspired by 1992’s Fire Emblem Gaiden. Thankfully the main story is overshadowed by the characters. Two in particular drive the story, childhood friends Alm and Celica. The game begins with them as agreeable youngsters, but as they age they discover their world views are changing. I found Alm annoying early on, as he’s presented as either, cocky, or a bellyacher, with awful judgment to boot. As the plot advances (no spoilers), he gratefully becomes more passable. 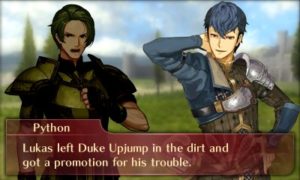 The majority of the characters are presented with accompanying voice work. This is a feature I welcome, and it’s incorporated expansively. That said, while more than serviceable, I must admit there’s little distinction in the various deliveries. As a result, many come off sounding rather generic, in spite of some powerful dialogue. The vocals even extend mid-battle, but having casual talks amidst raging combat strikes me as curious and inappropriate. These latter occurrences are entirely optional.

Before I go on, I should mention that I played the game under normal and casual settings.  Experienced though I am, it doesn’t really extend much into the Fire Emblem universe (these also allowed for a more timely review). Those looking for a harder difficulty, or whose preferences extend into “permanent loss” can pick their settings accordingly. Being able to customize the challenge and, to an extent, the depth are welcome options to have. A Turnwheel is another later option, allowing for some time reversal during battle. Features like these should only serve to widen the game’s audience. Helpful bookmarking augments the default save setup. 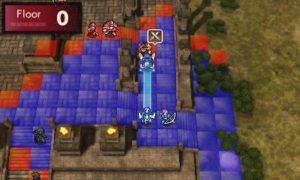 The grid-based battling is proven entertainment, so it should come as little surprise that the formula works well here. Especially as you recruit new allies, and bump into other battling groups, seeing your party swell. New to this entry is 3D dungeon exploration, adding an action-adventure layer to the proceedings. The occasional castle or cave lets you freely fill in a map while searching for treasure; always helpful for weapon forging. Yet, the enemy encounters still play out mostly identical. The one new strategic advantage is attacking as initial contact is made to start with an edge.

One of the better compliments I can pay Fire Emblem Echoes: Shadows of Valentia is how successful it is at nailing down pacing for the first couple of chapters, really drawing you in. Fatigue can impact the party, but not so much the player. With the exception of grinding for optional missions, tedium never really presents itself until the end of the third chapter. Even with limited enemy variety, and the occasionally cramped terrain, the core gameplay remains fun, and semi-addictive. Once the map opens and you can juggle between Alm and Celica’s parties it gets even better. Changing classes and unlocking new abilities through continued item and weapon use further adds to the fun. 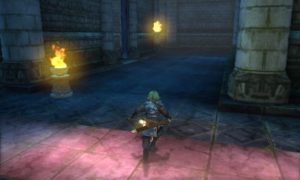 Visually the game is at its best when showcasing anime style cutscenes – I just wish there were more of them! The animations and character close-ups are strong, compensating some for the occasional blurry presentation on the aging 3DS hardware. I do wish I was playing this on a newer XL model so I could take advantage of the face-tracking 3D. First-person exploration scenes (in towns and villages) also stand out, reminding me of the Ace Attorney games. The soundtrack is certainly respectable, with a balance of dramatic and relaxing tracks, but it just didn’t leave as much of an impression as I’d hoped. I think the scope of the vocals were more of a focus.

The amiibo use is interesting here, and I’d like to briefly share my impressions of it. Nintendo was kind enough to share the 2-pack of Alm and Celica figures. The toys themselves are thin, though nicely detailed with the base coolly fashioned to appear as white flagstone. Celica is propped by a clear stand, while Alm has none. Once removed from their packaging, the figures can be used to summon illusory units in battle. How helpful these are is up for debate. The units last just one turn while taking HP from your regular character.  So don’t expect to exploit this feature the way some cheap AI characters do, summoning multiple, long-lasting fighters every other turn for instance. Timing is key. 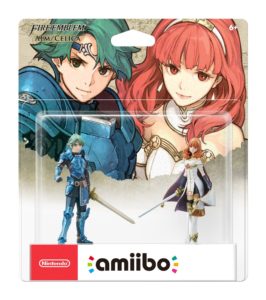 More interesting is how the amiibo unlocks special “Ordeals” dungeons. In these, you can collect a ton of helpful items, while battling enemies that are unique. However, for unknown reasons “Miss!!” attacks ramp up immensely the closer you are to victory, almost to the point of comic absurdity. It’s such a sharp contrast from the main game, it makes me wonder if these were worked on by a different, less experienced, group? A weaker way to implement challenge you’d be hard pressed to find.

The game’s early 90’s DNA comes through, though that’s not necessarily a bad thing. Features like Global Rankings, StreetPass, and DLC (though expensive) will soon be active as well. Hopefully, the free-to-start Fire Emblem mobile game will drive casuals towards Fire Emblem Echoes: Shadows of Valentia on the 3DS. It should also help with future Switch installments, like Fire Emblem Warriors. All said, I see Emblem enthusiasts having a pretty good time with this one, even more so if they can enjoy the plot more than I did. However, if you’re not familiar with the Fire Emblem franchise, I can’t say that this is the entry to start with. 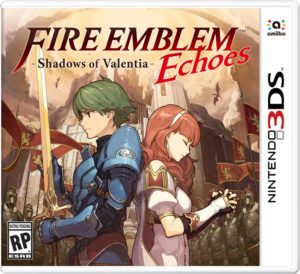 All said, I see Emblem enthusiasts having a pretty good time with this one, even more so if they can enjoy the plot more than I did.