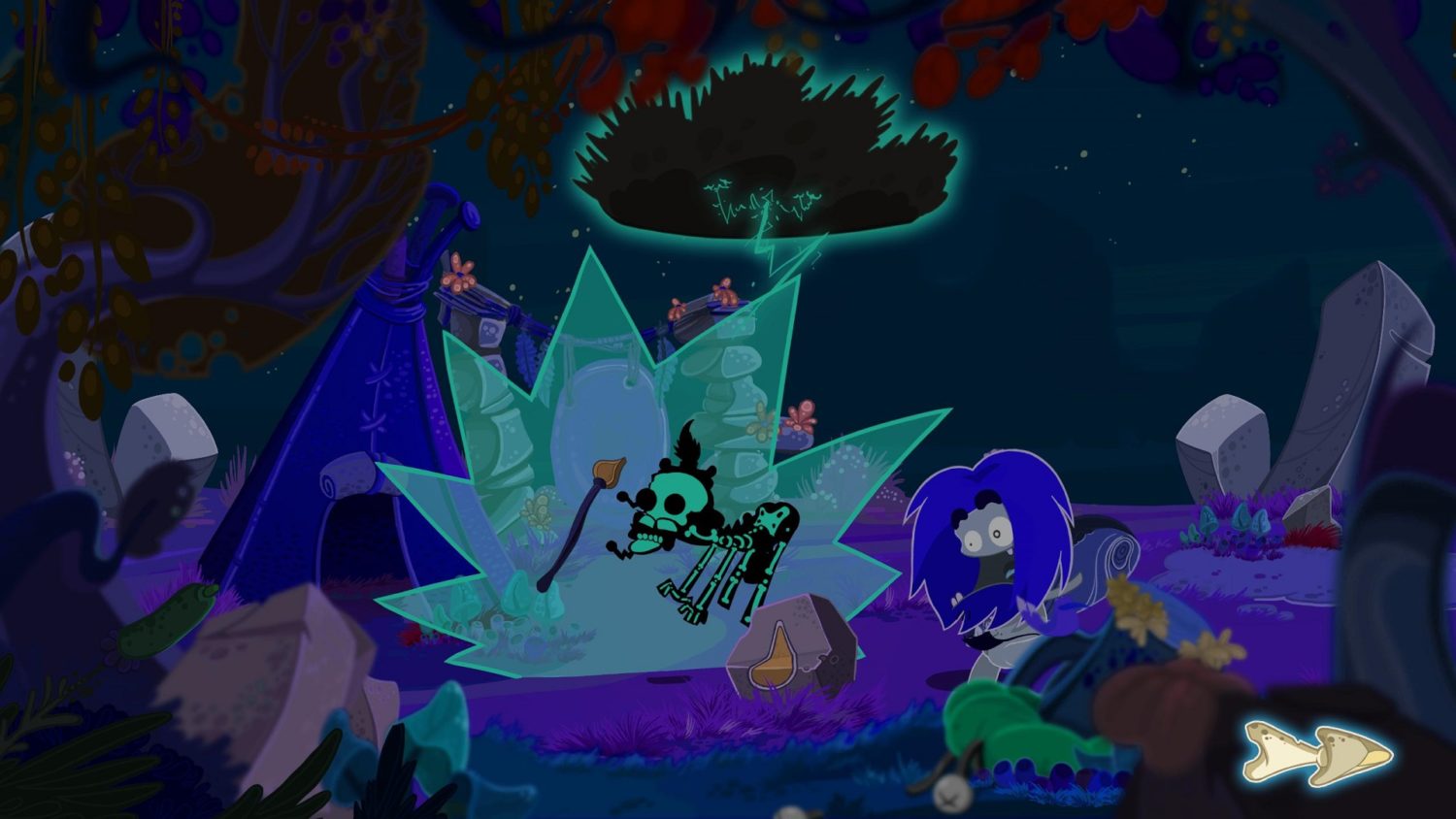 Let us never lose our yearnin' to keep the fire burnin' all night long.

When we say this game is a throw-back, we mean way back to the stone age. Fire: Ungh’s Quest is the story of our hapless hero, Ungh. On his first night watch, all he had to do was make sure the campfire didn’t go out. Too bad he fell asleep and let the fire die. Now, Ungh has to get out there in the world and figure out the secret of fire before he can go home. 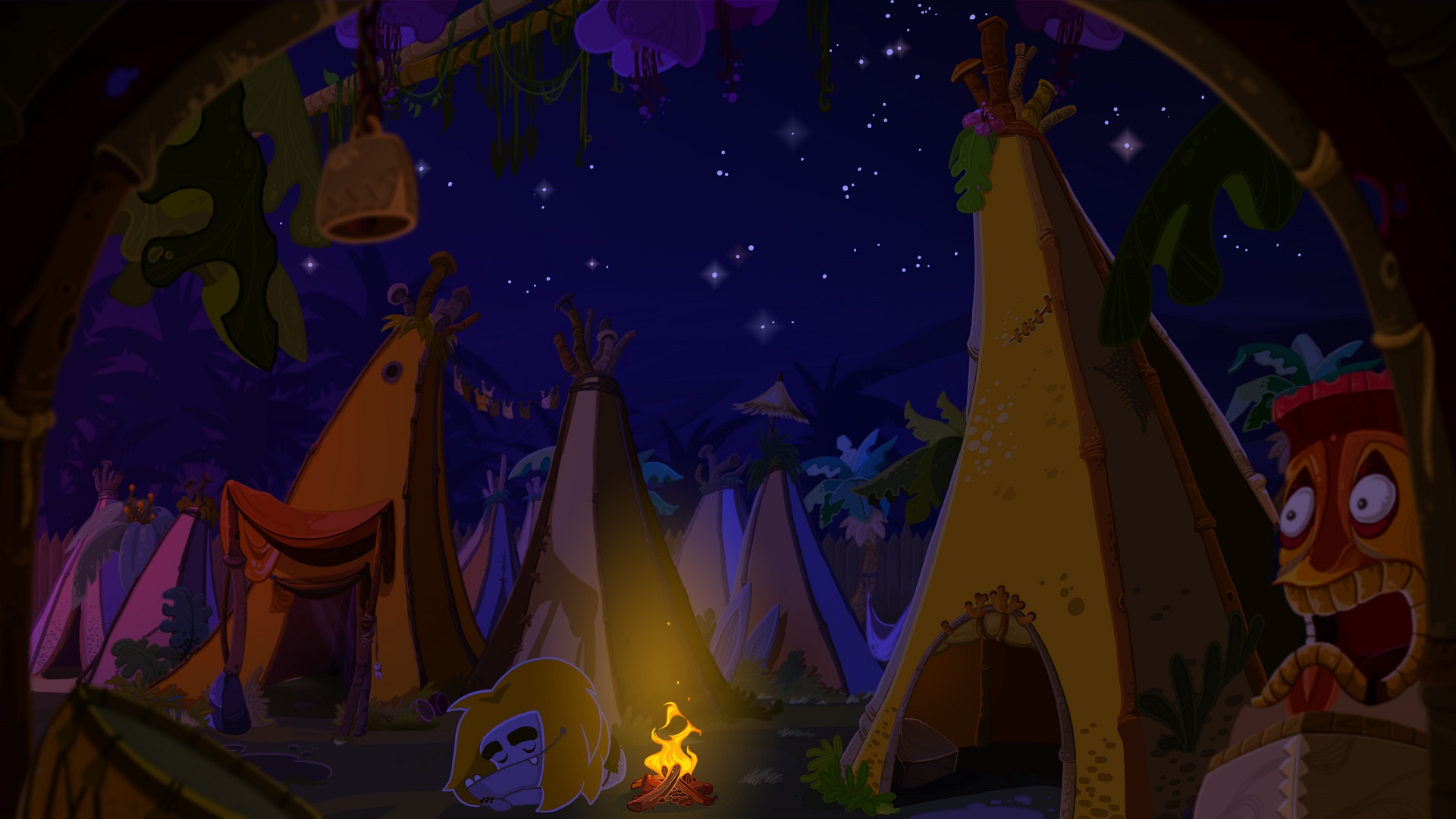 On your journey, you will come across many interesting creatures, some of which you even get to roam around inside (don’t worry, it’s not as gross as it may sound; this game is kid-friendly  puzzle adventure). The graphics are on the cartoon side—colorful with clean lines and simple imagery. The soundtrack is nice, which is a very good thing because there is no dialogue or text. The only form of communication you get with the game—other than a few grunts from Ungh—are images and pictures in thought bubbles. 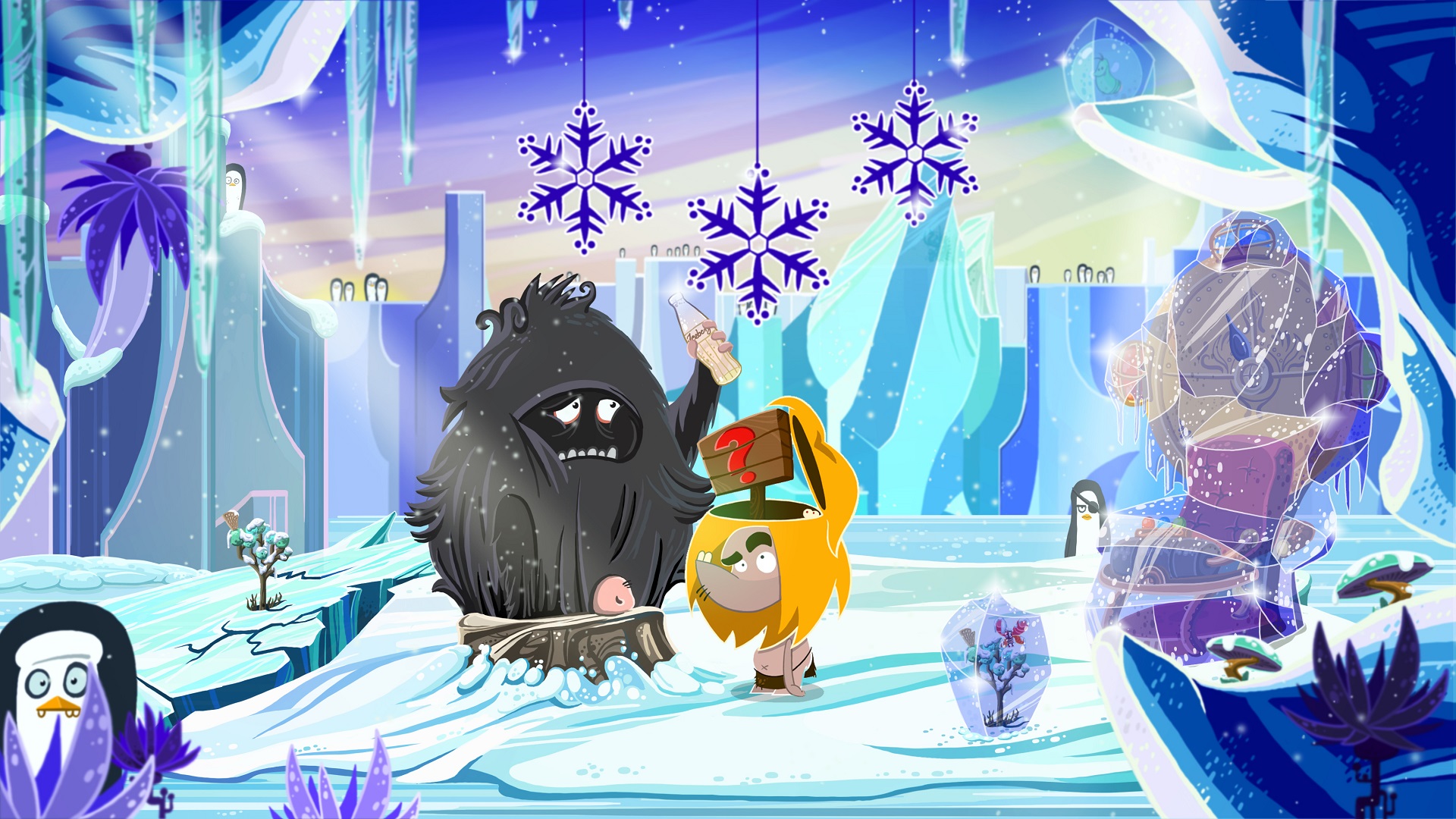 Pressing the D-pad buttons provides hints; the up, down, and left buttons will show you an icon on any game element with which you can interact. Even here, the game won’t tell you everything—there are still hidden bits to find. Each level will have multiple areas (usually just three screens worth) in which you need to find something, use something, walk down something’s gaping maw—you know, just another walk in the jurassic park (well, it kinda’ looks like a dinosaur). 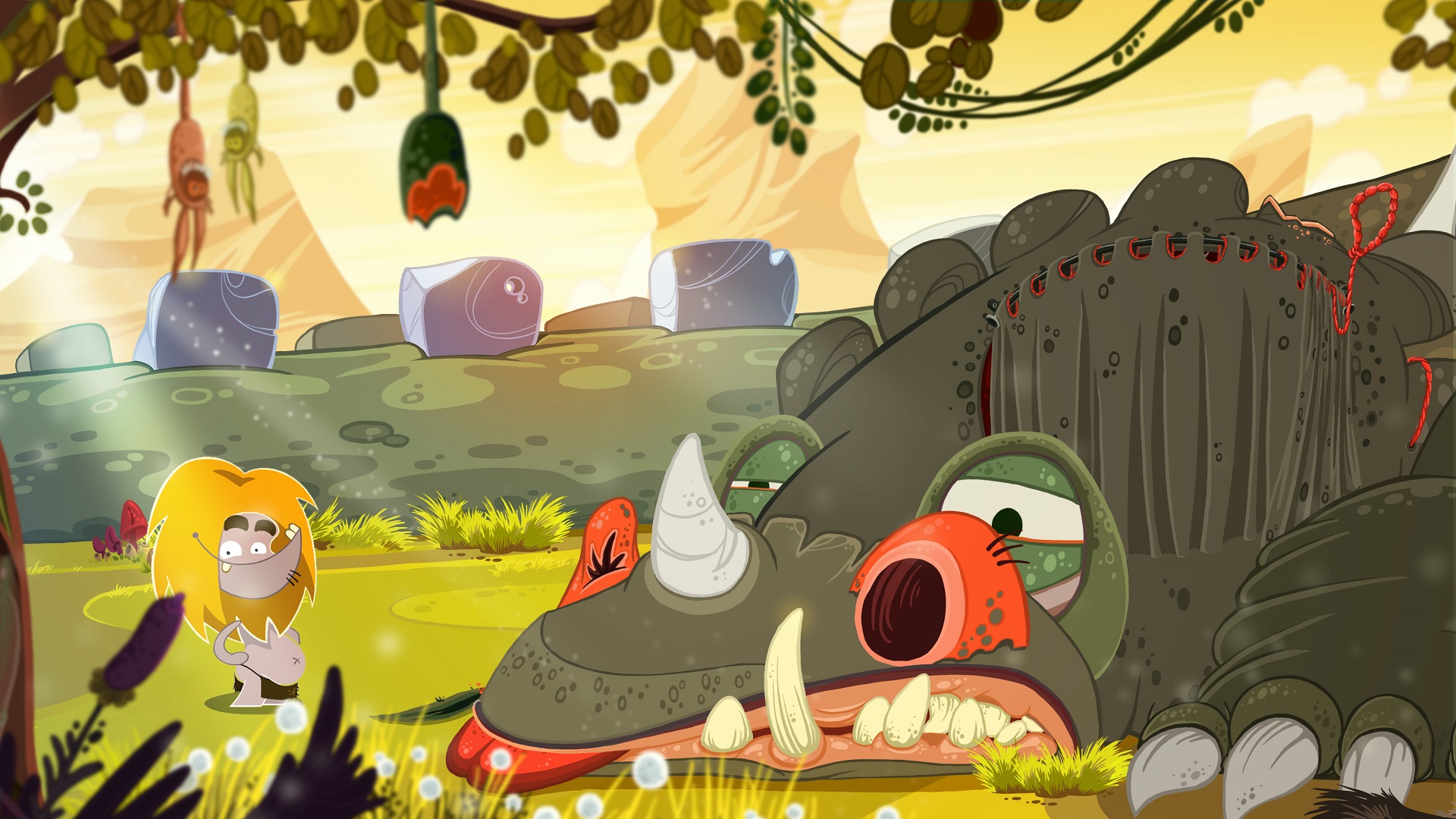 Don’t let the simple graphics fool you. The puzzles are not necessarily as straightforward as you might think. Some of the solutions require solving one puzzle just to provide an element needed to solve another. Some of these can turn into a bit of a trial-and-error grind, but there is a certain satisfaction to getting them right.

Let’s talk about the controls for a moment, shall we? Playing this game on the Switch console is pretty easy. Since Ungh can only go left or right, it is only a matter of using the control stick to send him scurrying across the screen and then using the touchpad (in handheld mode) to select an item with which you want to interact. 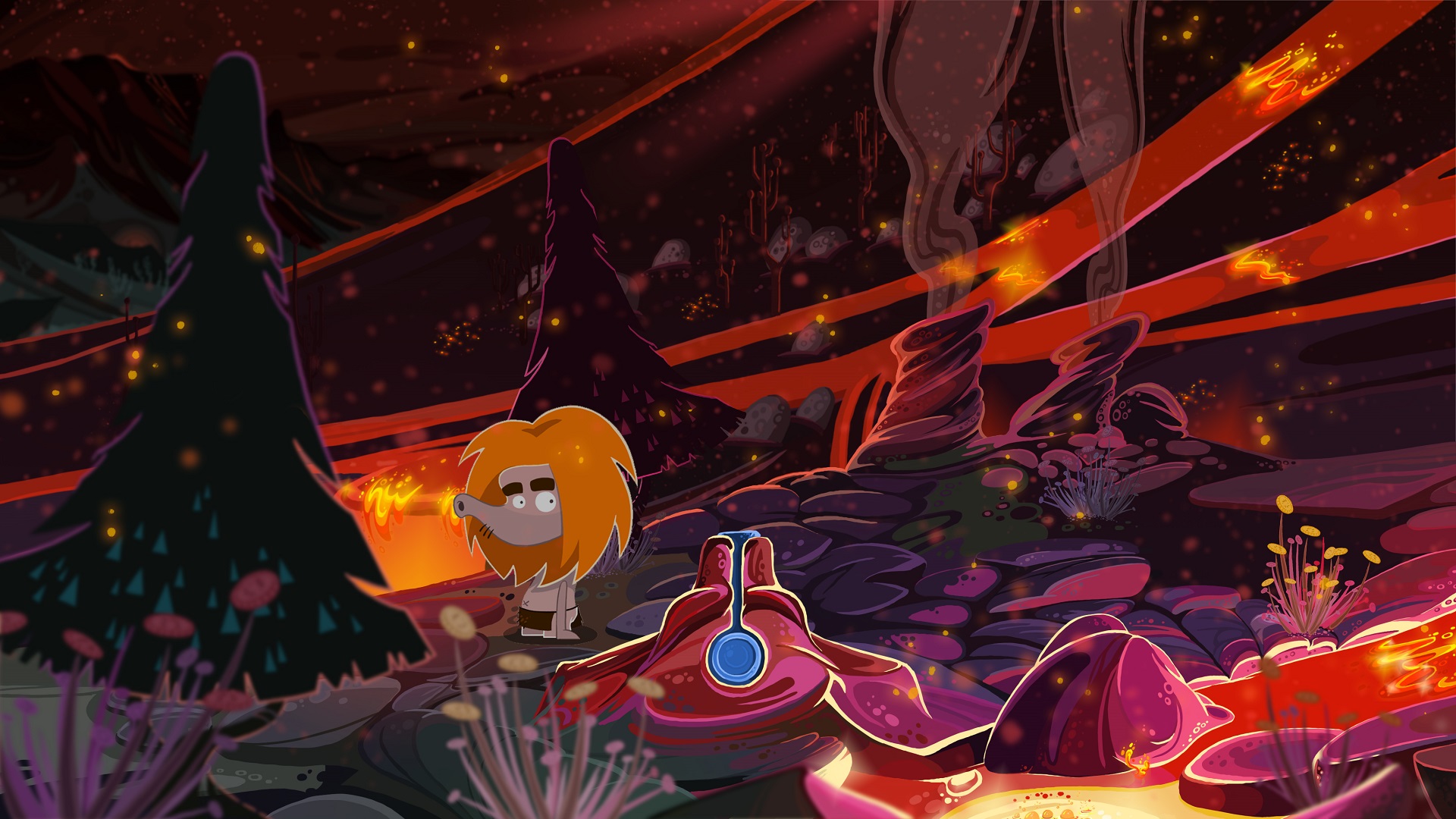 If you want to play on your TV, things get a little more complex. It is nice to have a larger image and better speakers for the sound, but the controls change to a combination of buttons and accelerometer. Since the touch screen is not an option, you are provided with an arrow shaped pointer to select and use things.

The challenge here is that the pointer moves based on the controller accelerometer. As you tilt and pan the controller, your pointer will fly across the screen. This sounds great, but the position recalibrates automatically to make sure you can do what the game thinks you want to do. In a couple of instances, I was trying to gently hover the pointer over a small target. Since I was moving slowly, the game thought I must want my cursor to recalibrate to another spot on the screen—silly player. You might think, “Why not just use the Joy-Con that isn’t being used to walk around?” and you would be making a good point.  Unfortunately, for some mysterious reason, both Joy-Con analog sticks move the character, and the only way to use the pointer is the accelerometer. Really, guys?

Fire: Ungh’s Quest is not bad as puzzle games go. There won’t be a lot of replay time; this is a “one and done” game that can be completed in a very few hours, making the current asking price of $14.99 a bit high. It will, however, flex your puzzle solving skills while it lasts.

With no words, Fire: Ungh’s Quest provides a relatable hero in a quirky puzzle adventure. The imagery is playful and well rendered, and the audio is good with both sound effects and music. Playability is better in handheld mode than docked, but it’s worth a go either way for those who like puzzlers.