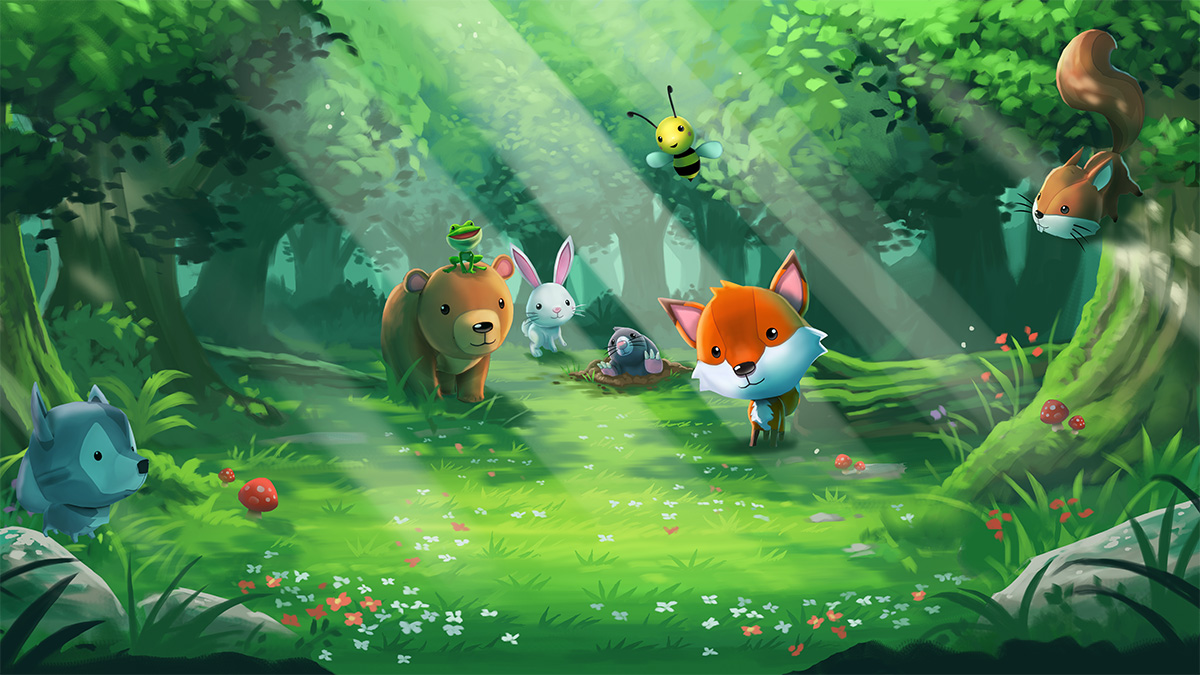 Binary Mill’s Forest Home is a different, kid-friendly face on a familiar puzzler. You know the one, as you’ve likely played it in passing; you must connect sets of two dots with lines that don’t bisect any other lines. In this case, the dots are animals and their homes, and the lines are leaves, flowers, grass…whatever’s appropriate to the animal. It’s certainly cute, but is it fun?

Honestly, that depends upon the level of your problem-solving skills. The game grids range in size from 5×5 at the start to 9×9 as you progress, and the total number of animals needing to get home will grow as well. The obstacles vary, too, ranging from objects that simply block your path to bridges that require you to move over and under them. 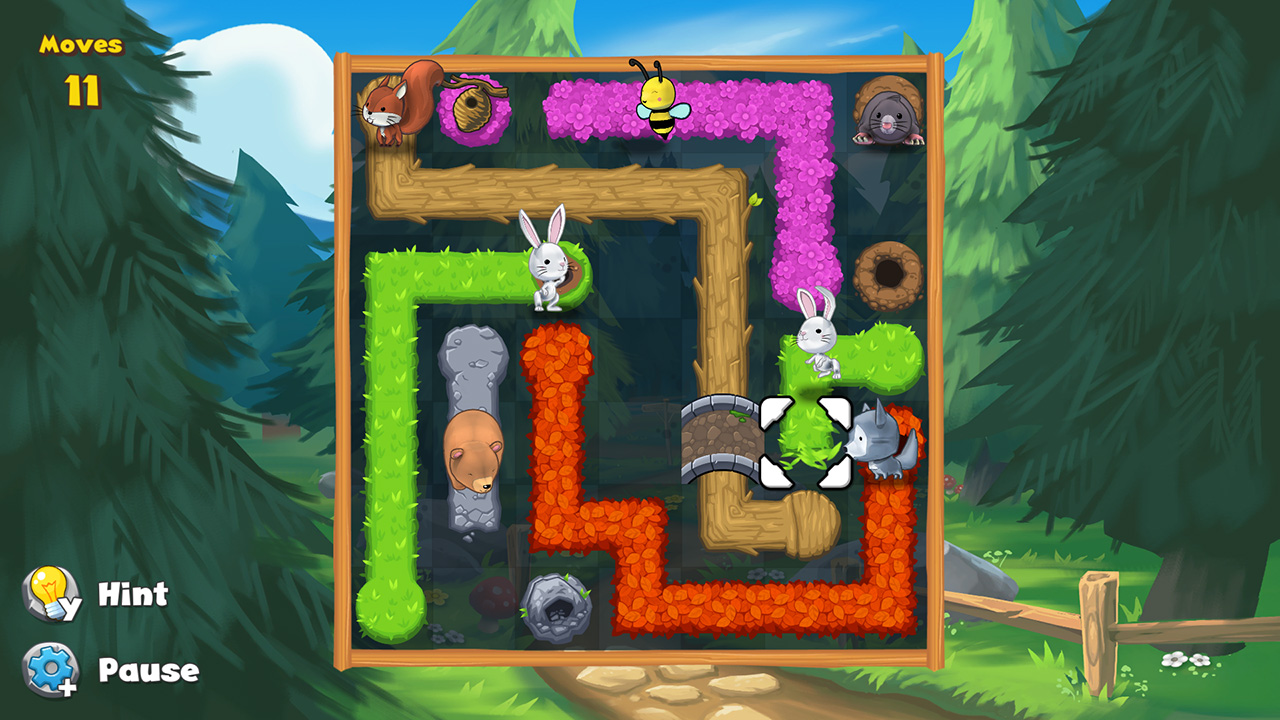 There’s plenty to do, and the game does a good job of laying this all out for you. Older gamers will find the tutorials unnecessary and redundant, but they’ll benefit the younger crowd.

This being a mobile port, you have the option of moving the animals across the grids with the Switch’s touchscreen when playing in handheld mode. It works fine, and the 5×5 grids were large enough for my large fingers to make their way through without too many errors. Creeping closer to the 9×9 grids, however, I found myself inadvertently moving in a direction I did not want to go. Backing up is allowed, but you’ll lose that minimum-move-star for doing so. Thankfully, you can also use your Joy-Con or Pro controller in docked (and portable) mode; press A to select your animal, movie it with the L-stick or D-pad, then press A again to drop it off at its home. All in all, Forest Home is very easy to pick up and play.

Each level has three star rankings to achieve—mostly 1.) complete the puzzle, 2.) fill all squares with the animals’ paths, and 3.) do so in the minimum number of moves. This adds some replay value, but there are so many levels in this game (“thousands” of dynamically generated puzzles, as claimed by the developers) that there’s no need to bother replaying anything. The drawback here is that the difficulty level ramps up so slowly that it’s a slog to reach a challenge for players with any sort of puzzle experience. 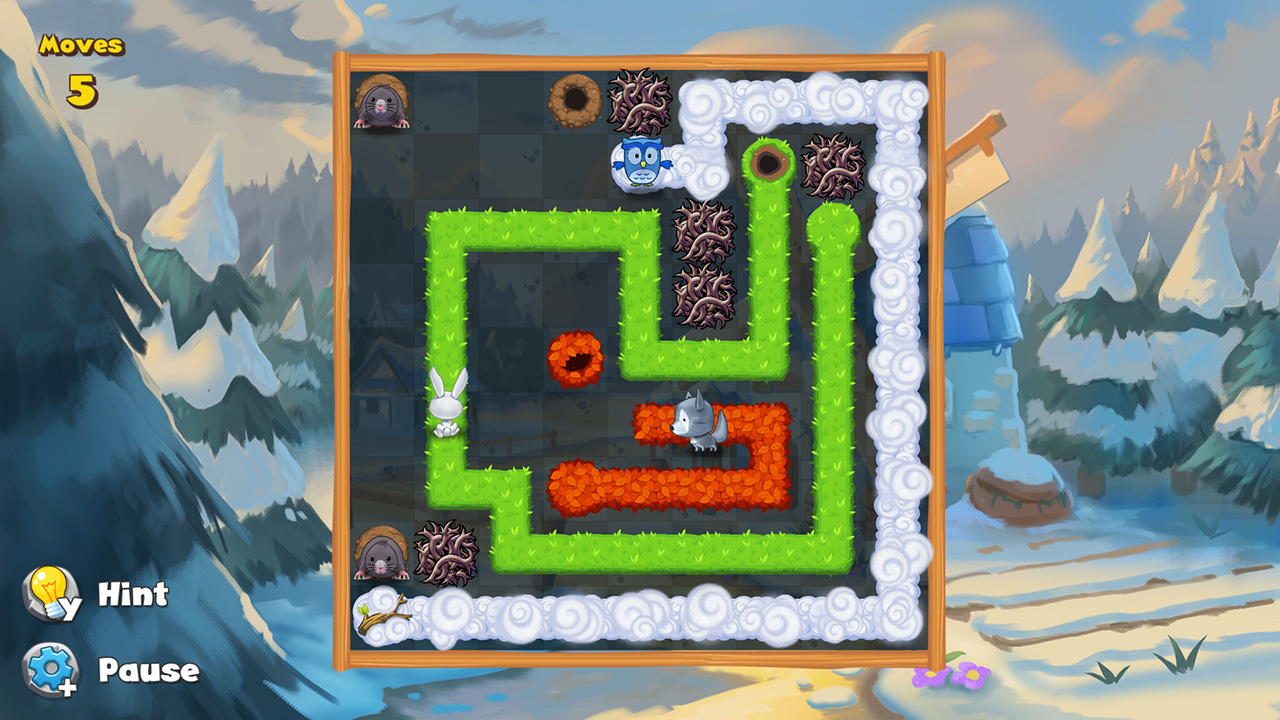 This isn’t unexpected, though. The brightly colored, happy-animal theme is obviously aimed at younger players, as is the ongoing scrapbook that’s filled in as they progress. That doesn’t mean adults won’t enjoy it (the humor of some animal names will be lost on kids…I mean, I’m pretty sure there’s a Danger Mouse reference in there), it’ll just take longer.

If that’s an issue, completing puzzles earns you gold that can be used to purchase higher difficulty packs in Quick Play mode. You’ll still have to play through many easy puzzles, however, to acquire that gold. You can also opt to use the gold to purchase new animal skins—you know, in case you really want that butterfly or simply prefer for your rabbit to be pink. 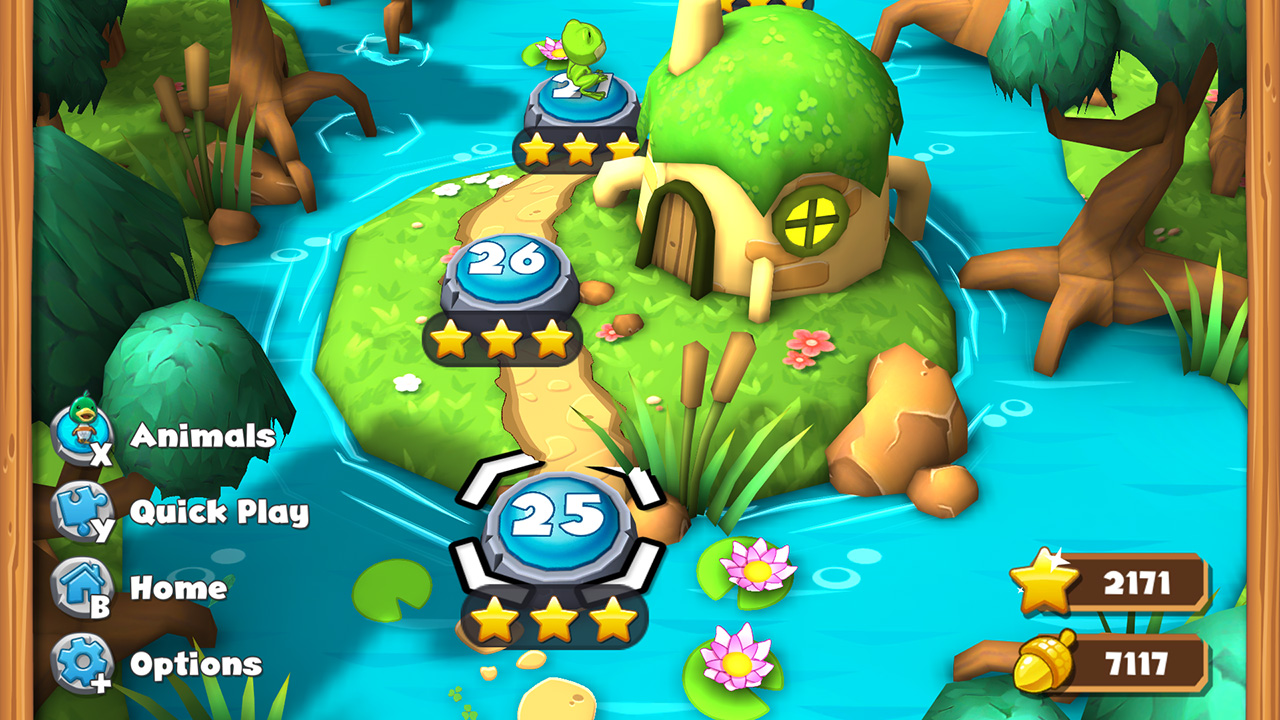 All of this is handled via in-game currency; there are no IAPs like in the mobile version to push you along. That’ll sound good to Switch gamers, but does the lack of microtransactions justify a $15.00 asking price?

Maybe, if only for the volume of content alone. There are so many puzzles here in the Adventure Mode and unlockable quick-play content that it’s certain to hold the attention of younger gamers for quite some time. The puzzles will start getting extremely challenging by the time they’ve unlocked all of the available animals, and that’s right around when the parents can take over!

Forest Home is a pleasant puzzler with cute animals that will charm and challenge children until it gets too big for them. It takes a long while to get interesting for older gamers, but at least the woodland characters don’t get annoying along the way. The sheer volume of puzzles explains the asking price, but it’s unlikely players in any age group are going to finish them all. Maybe that’s the point; let the whole family take their turns on the same account and, after a while, all of the forest creatures will finally find their home.