Retro video games have made quite the comeback over the last few years. Developers have been cooking up some impressive titles loaded with tons of our favorite nostalgic ingredients. Bonus Level Games proves they deserve a spot in that cookbook with their recent port of Fox n Forests on Nintendo Switch. 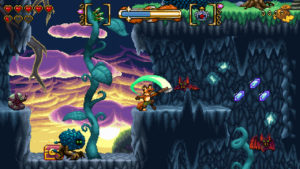 The story isn’t too important in Fox n Forests, but it gives the game the perfect amount of set-up. Rick, our adventurous fox, finds himself in need by the old Season Tree. Four pieces of bark have gone astray and need to be returned to the tree so you can bring balance back to the forest. In return for your deeds, the tree grants you special abilities such as the gift to change seasons, and shoot magical arrows. The more you progress throughout the story, the more abilities you’ll receive from the tree and the more upgrades you’ll be able to obtain from the town’s hub. 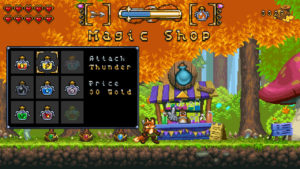 Most of the levels are extremely vast, giving you the itch to explore every nook and cranny just as you would in a game like Super Metroid. You’ll even find you’ll need to backtrack to certain levels with your new upgrades to get to areas that weren’t accessible at the beginning of your adventure. However, each world contains five “magical seeds”. You’ll be forced to backtrack to get some of these with abilities you’ve recently received. I found this to be a bit tedious at times since it felt more forced rather than a eureka type of moment you’d find in a “Metroidvania”.

Combat is smooth, sharp, and fun. Using different arrows to crush your enemies gives certain enemies that were once difficult a breeze, and using your bayonet in the air to do 360-degree slashes feels just like Zero from the back half of the Mega Man X series, too. You will need to be careful with how often you use certain arrows though, as they use up mana. Changing seasons takes up your mana as well, so be wary of your mana gauge when using both abilities at the same time. 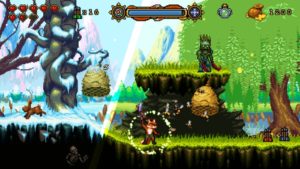 You’ll find that changing seasons is so much more than just an ability in Fox n Forests. If you check the game’s Kickstarter, you’ll see that it was the main focus of the game’s production, and they definitely delivered. Changing seasons is what makes the game so special. Your strategies in combat, platforming, and boss fights all revolve around the idea of changing between seasons. Paths will open by melting waterfalls when changing from Winter to Summer. Leaves will fall and will be used as platforms to leap to new areas when changing from Spring to Fall. It’s all done with so much thought, and to see every level have two sides to it really makes for an amazing idea. The artwork that went into it alone makes it a joy to experience. It’s one of the most charming platforming games I’ve had the pleasure to look at thus far on the Nintendo Switch.

Speaking of charming, you’ll find really clever references to nostalgic games within the dialogue of some of the characters. Pay attention to the writing in this game if that’s something you love to see done well. References to Zelda, Mega Man and more show up right when you’re having a nostalgic moment during Rick’s quest. 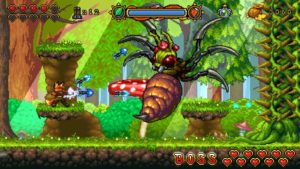 The game does not come without its faults though. It is rather short, with each world only containing about three or so levels. As fast as some are, a few are rail shooter like levels that are over quickly. Although they have good ideas, they seem like filler and slow down the idea of exploration that you get engrossed in within some of the other levels. I was able to get through the entire game with most of the upgrades in about six hours of gameplay. There were a few tiny performance hiccups here and there, too. It was nothing that crippled the experience, but they were noticeable from time to time. Also, as clever as the dialogue was, I did find the font art to be hard to read at times. I caught myself having to slowly read sentences to make out some of the words due to the color contrasts.

Fox n Forests delivers on all angles for anyone who’s been in love with the new renaissance of retro platforming games. The beautiful artwork, exploration, and combat makes this a game that Nintendo Switch owners should welcome with open arms. Its easy for a game of this genre to get lost in the mix with its competition, and while not perfect, I’d still put this right up there with the greats of Shovel Knight, Owl Boy, and other classics that emerged from this decade’s revival of retro platforming games. 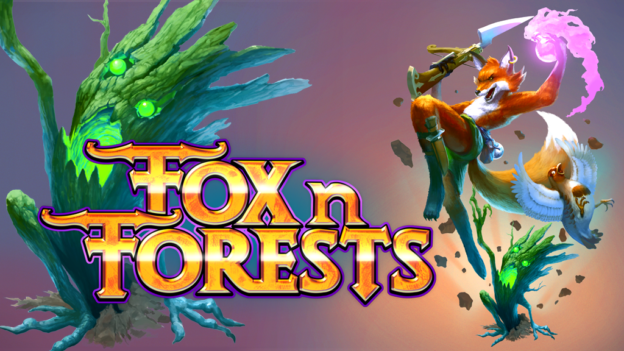 Fox n Forests delivers on all angles for anyone who’s been in love with the new renaissance of retro platforming games. The beautiful artwork, exploration, and combat makes this a game that Nintendo Switch owners should welcome with open arms.