Such A Banana Frenzy!

My Friend Pedro is the banana bullet hell that you didn’t know you needed. In fact, it is Devolver Digital’s best title to date, offering a charming story, creative levels, speedrunning, multiple difficulties, parkour, and great gunplay! 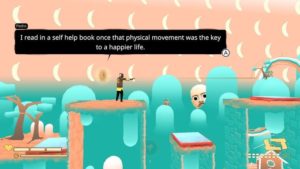 My Friend Pedro is exactly what it implies: Blood, Bullets, and Bananas. Whilst it lacks a lot on the banana-front, the gameplay and quirky story of Pedro all but make up for it. The game is a high octane-running ballet about a man’s struggle, at the behest of a sentient banana, to obliterate all in his path.

I’ll be honest; despite remaining excited for the game, I was skeptical at its control scheme concerned me. With that being said, I was pleasantly surprised when I got the chance to get my hands on it. My Friend Pedro’s control inputs were executed flawlessly.

Controls are an important factor in satisfying gameplay, but gunplay is just as important in a game like this. My Friend Pedro’s gunplay is very fluid, fast-paced, and just pure bullet fun! Luckily, it doesn’t limit you to using pistols, either; there are a good amount of guns that can be used, each of which feels different. There are everything from pistols to sub-machine guns to shotguns to assault rifles with ‘noobetube’ grenade launchers. It really is a diverse cast of weapons. It’s also worth mentioning that a good portion of the weapons on offer have a dual wield variation. Weapons are really what make, My Friend Pedro, a special “beast” of its own, which is great because you will need strong weapons when going up against those bosses. 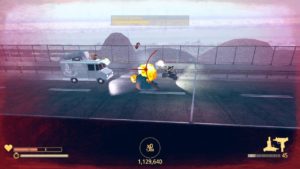 Aside from the excellent gameplay and quirky story, My Friend Pedro really shines with its environments. Each environment feels different, both creatively and layout-wise. My favorite world has to be Pedro’s. It feels so unique compared to the others, with floor tiles dynamically changing according to your movement. And, Pedro can tinker the environment to his advantage (for example, he can run in circles to screw nails higher or lower so he can easily traverse the level). That being said, all the worlds feel different. The first world, in fact, gives me a Chinatown vibes which is very different to Pedro’s creepily odd-natured world. All the worlds have universally reactive elements, too. For instance, you can use skateboards, explosive barrels, and footballs to your advantage in the majority of the levels. It’s actually quite satisfying to ride a skateboard whilst shooting enemies in rapid succession.

Whilst the gameplay is flawless, the overall game does fall short on a few minor things. For example, the story is purely text-based, which is unfortunate. I would’ve loved to see how Deadtoast Entertainment interprets the voice of Pedro. At least we get to hear beautiful music whilst we play through Pedro’s delightful game! 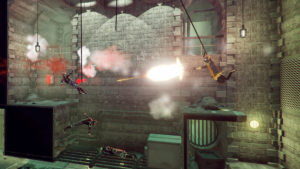 Another thing My Friend Pedro falls short on is replay value (or at least for some, it will). Whilst I had no problem with its speedrunning focused nature, I’ll admit there isn’t much incentive to come back aside from that. At least the campaign is relatively long, for its price.

Altogether, My Friend Pedro is a speedrunner’s paradise, offering a charming story with good gunplay for its price tag. But if you are looking for pure replay value you won’t find that here (unless you are a speedrunner).

Altogether, My Friend Pedro is a speedrunner’s paradise, offering a charming story with good gunplay for its price tag. But if you are looking for pure replay value you won’t find that here (unless you are a speedrunner).